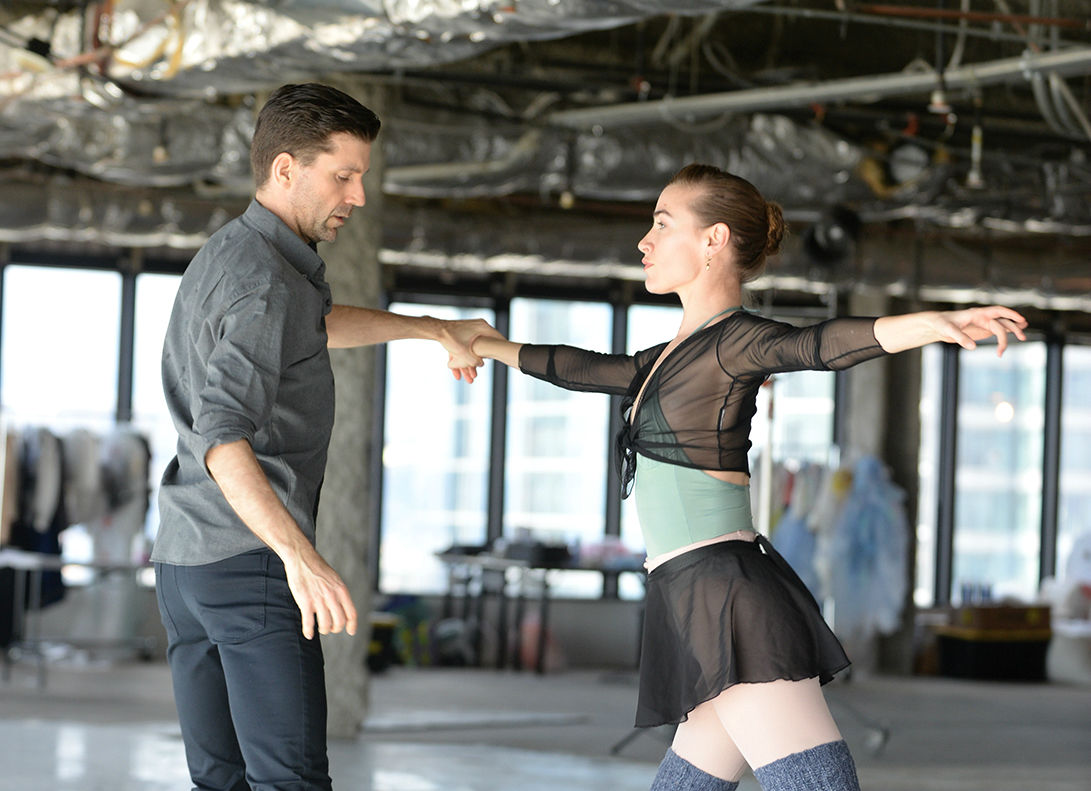 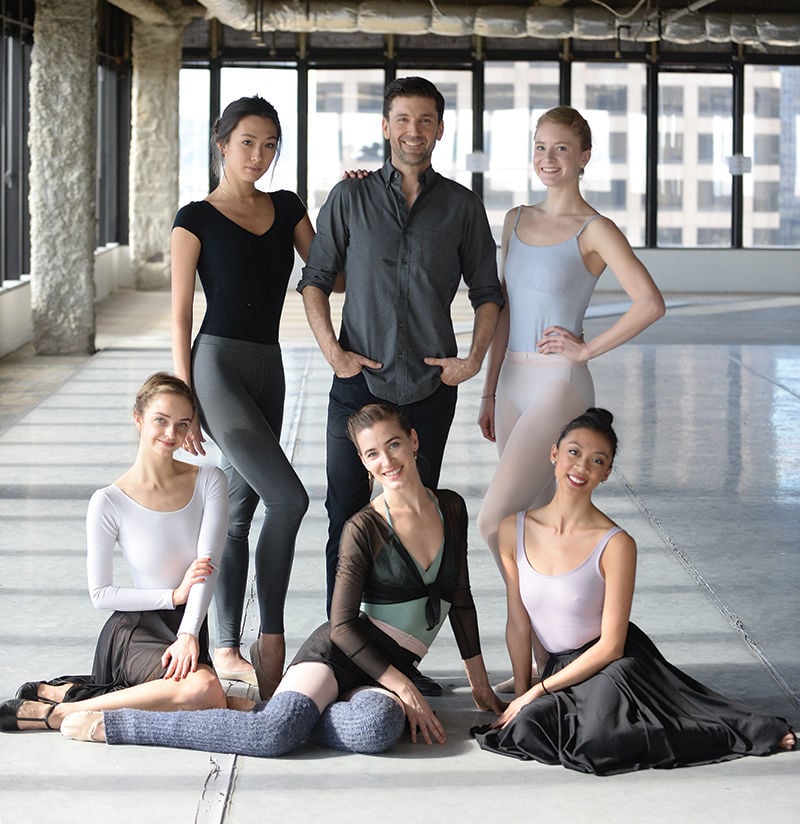 The company operates out of a space on the 32nd floor of the office building at The Bloc complex in the Financial District. 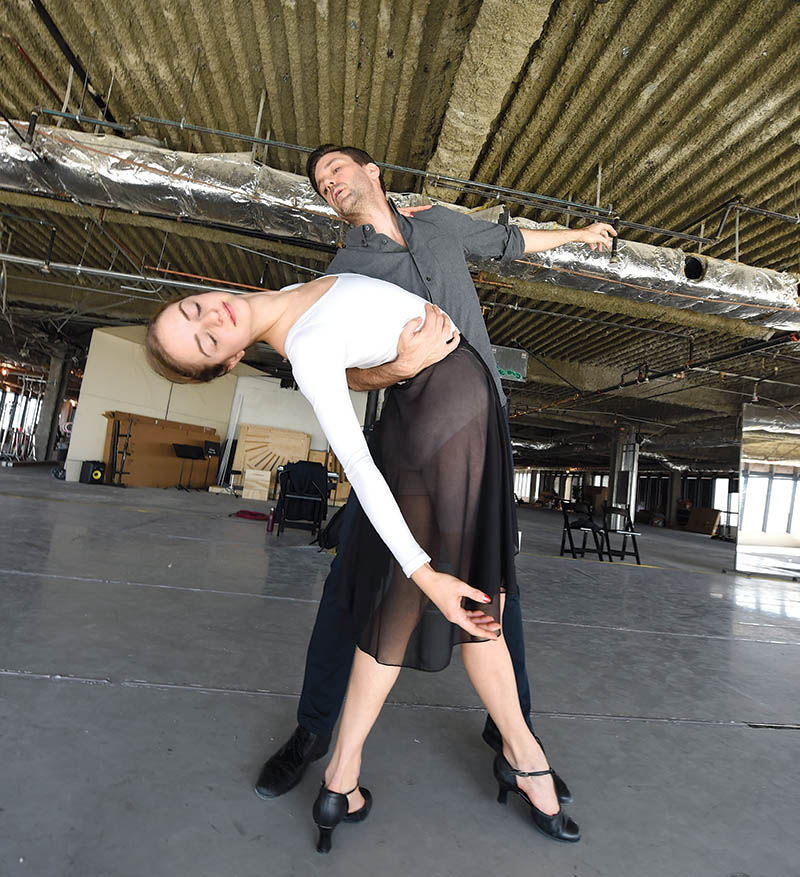 American Contemporary Ballet is performing 10 performances of its Astaire Dances. The show opens on Thursday, Feb. 1. 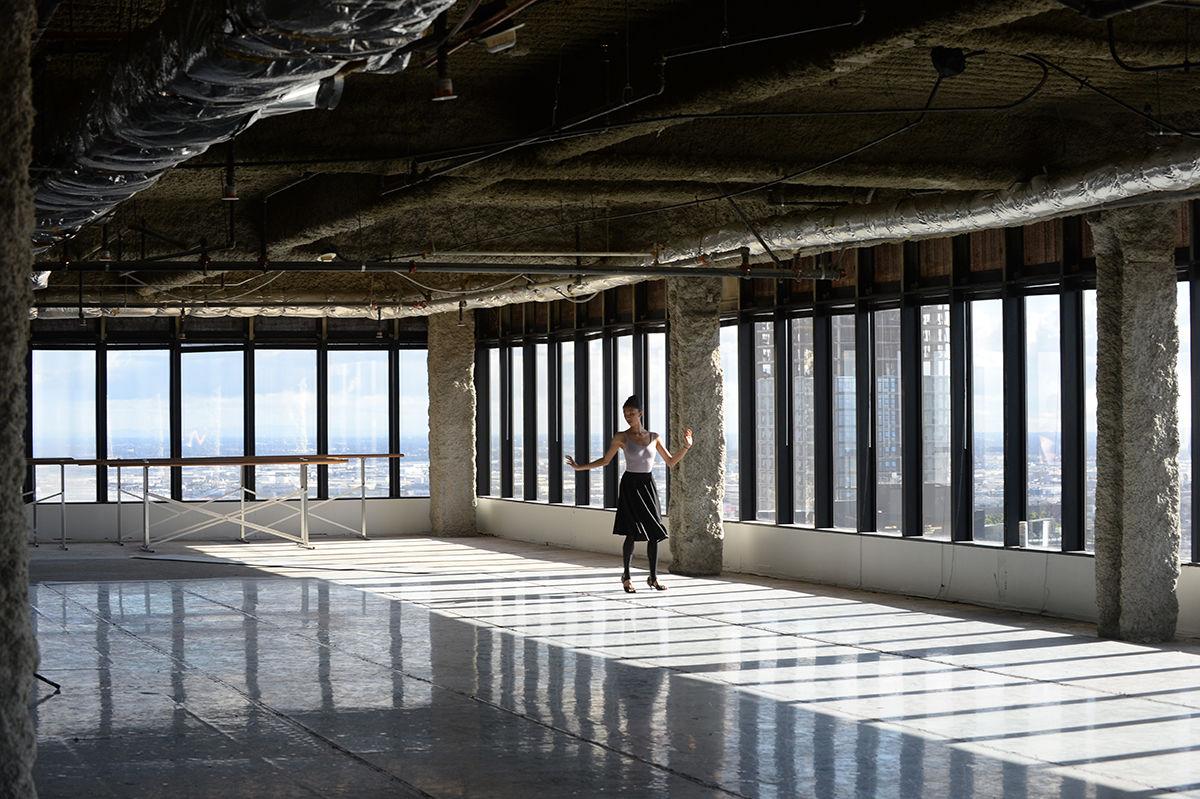 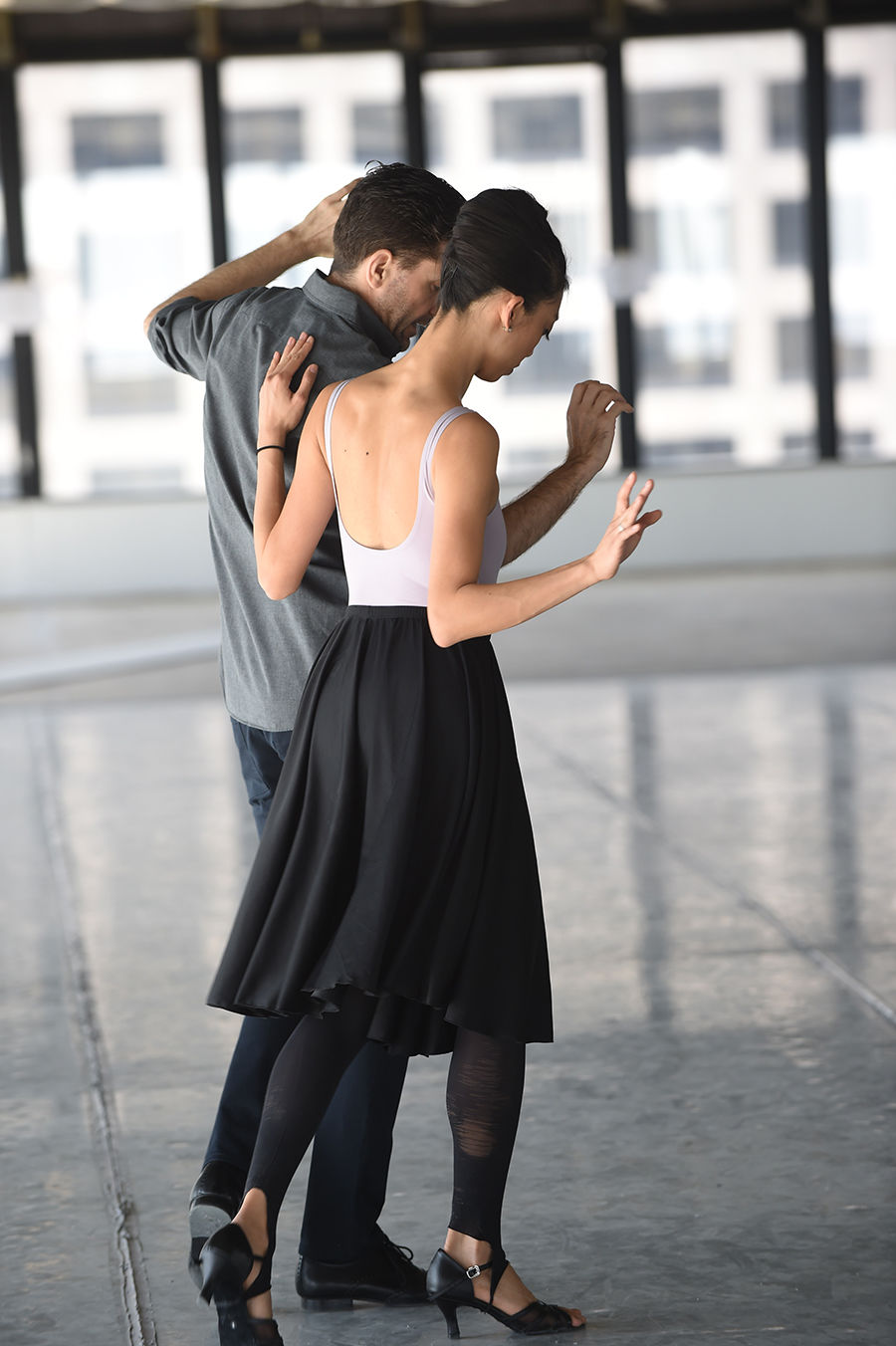 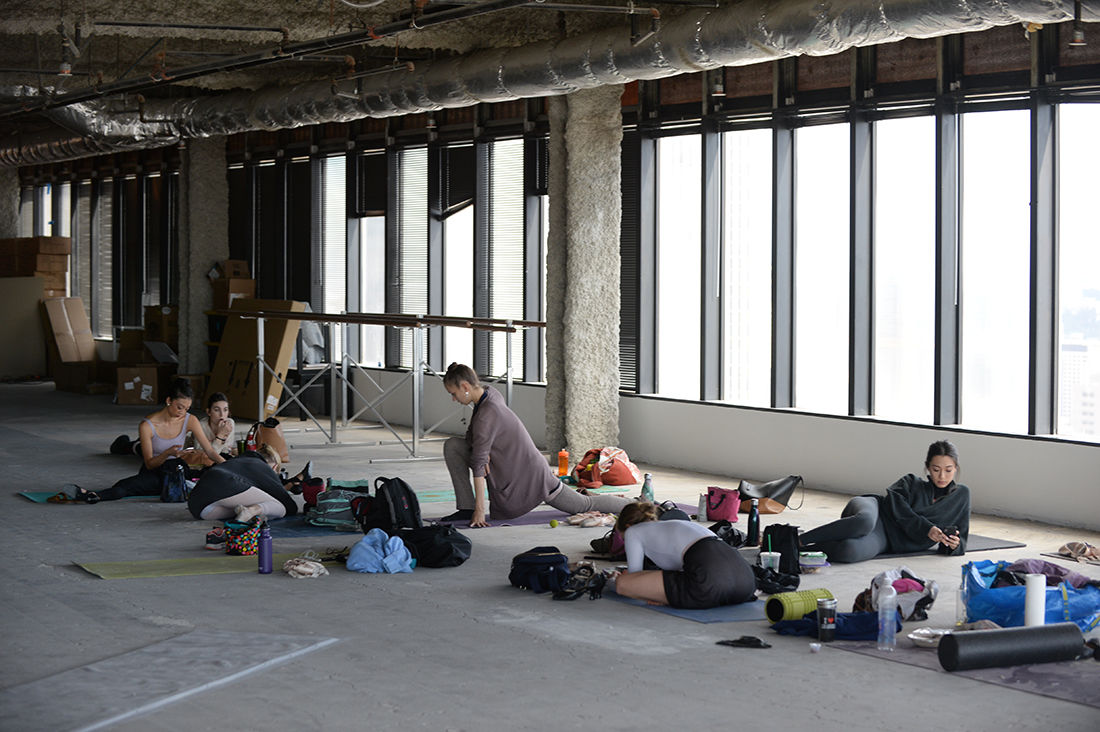 DTLA - The elevator slides open on the 32nd floor of the office tower at The Bloc complex on Seventh Street, revealing what looks like an empty, decaying office space. Fissures and pockmarks run along the raw concrete floor; overhead are exposed pipes and worn insulation, looking like a mutated mess of popcorn.

Suddenly, music sounds — blasts of piano and strings, lively and romantic and humming with mid-century flair.

Around the corner from the elevator is a dance floor, framed by a wall of glass that stretches across the tower’s ledge. Within the frame a woman and man are twirling and tapping, embracing and separating, their feet slipping and sashaying as the music swells.

With a nod, the lithe man takes two steps away from his partner and clicks the sound system quiet. Only the duo’s panting breaths fill the space.

“First run!” he says, hands on his hips. “Let me go over a few things in my head for a second.”

Lincoln Jones’ eyes fall to his feet as he retraces several steps into the rubberized floor, drawing invisible lines with his toes while softly counting in rhythm, as if reciting a short hymn. His partner, Rochelle Chang, does the same. Learning Fred Astaire’s steps requires a heady sort of diligence, after all.

It’s been three years since Jones moved his company, American Contemporary Ballet, to this unlikely space in the heart of Downtown Los Angeles. The troupe is preparing for Astaire Dances, featuring the moves of the legendary big-screen triple-threat. It opens Thursday, Feb. 1, and runs for 10 performances through Feb. 14. The five works on the bill include four taken directly from Astaire’s films and the finale choreographed by Jones in Astaire’s style.

Astaire’s lyrical dancing may seem unusual for a ballet company, but ACB thrives on melding classical technique with new-school programs. That innovative edge, combined with Jones’ perfectionist streak, proved attractive for Chang, who came onboard in 2014.

“I joined ACB after a friend in the company spoke highly of it, plus my own research,” she says. “I was young, and that first year was hard. But Lincoln’s transformed me into the kind of dancer that he wants, which is also the kind of dancer I want to be.”

The longest-tenured dancer is Theresa Farrell, who also serves as ACB’s executive director. Jones and Farrell met as teacher and student on the East Coast and shared a love of the work of George Balanchine, the father of American ballet. It is no coincidence that Balanchine’s favorite dancer was Astaire.

“I’ve been training since I was 8 years old to have flexibility and strength as a ballet dancer,” Farrell says. “That carries over into Astaire’s work, but to really get the musicality and smoothness of it is a surprising challenge. It changed my ballet, too. I thought about elegance and grace and how each step has to mean something, rather than being a throwaway.”

Jones, who is 42, only started dancing at 19, and picked up ballet a year later. But the late bloomer was a natural talent, taking on professional roles with the Columbia City Ballet in South Carolina at 23 and moving to New York City to dance and teach a year later.

Jones likes to say that if Balanchine were alive, he would have begged to sweep the master’s front stoop and learn for no pay. That wasn’t an option, and in surveying the ballet landscape, he saw no potential mentors who would help him progress in Balanchine’s style.

A turning point came amid a conversation with an acquaintance, who declared that starting a company wouldn’t be hard for Jones.

“Of course, now I remember that he meant legally incorporating a company isn’t hard,” Jones says, smiling. “But it got the idea moving.”

In 2004, Jones began holding auditions for ACB. Farrell got wind of the fledgling company from a friend. One class was all it took to convince her that Jones was, in her words, “the next big thing.”

“I had just graduated high school from the North Carolina School of the Arts, and I moved to New York City in search of a choreographer that was working in the vein of Balanchine,” she recalls. “I wanted to work with a living choreographer. I didn’t want to just dance the past. Lincoln had that vision.”

Farrell quit a paying dance job to work full-time with Jones, despite her family’s protests about her rejecting offers from established companies. Slowly but surely, she asked for more duties. Over several years, the duo began working hand-in-hand on major decisions, including the one to leave New York City — an expensive locale, and one already dominated by juggernaut ballet institutions. They turned their eyes west, to the city where Jones was raised.

“I remember on our bus ride together to my class in New Jersey at the time, she talked with so much enthusiasm about the future of ballet, in a way I had never heard from anyone else,” Jones says. “Other people were driven to dance. With Theresa, it was not just her path, but the future of the art form. We were committed to that ideal in an extreme way.”

ACB moved to Los Angeles in 2011, and good fortune soon flowed. A trip to a stage lighting shop in Mid-City led to a chance encounter with the owner, who had built a two-story dance studio in the back of the warehouse; impressed by Jones, he offered it free of cost for the company’s first season in L.A.

The team stumbled across their second space at 5900 Wilshire Blvd., where an empty room sat at the base of the skyscraper. Jones knew he couldn’t afford the lease, but called the number in the window anyway. Eventually he was connected to Wayne Ratkovich, head of the huge Downtown-based property firm The Ratkovich Company.

“They seemed to be wonderful young people with very high aspirations. So we let them use the space until we had a tenant,” Ratkovich says. “They became an attraction for our project, and our interest grew. When that space got filled, we moved them to The Bloc, free of charge again. They are extraordinarily talented, and we’re fortunate to have them in Los Angeles.”

While The Bloc is leasing quickly, there’s so much space that Ratkovich thinks ACB will stay in the tower for quite some time. That’s good news for dancers like Elise Filo, who is in her third season with the company.

“I wasn’t Balanchine trained, but the company is innovative within the context of classical ballet. Lincoln has this incredible way of matching dance to music and the timing of the footwork,” she says.

No rent means money can be saved for future growth, more shows and the hiring of additional dancers. That also helps Jones focus on the actual dancing. He compares himself to a Renaissance-era painter, learning the craft by copying the masters, for now. A signature style will come in time, he says.

“Ballet for us is an expansive, exalted art form. And here we have an infinite backdrop,” he says, glancing at the view beyond the glass windows. “When I first started dancing, I dreamed about ballet happening somewhere really high up. This is fitting.”