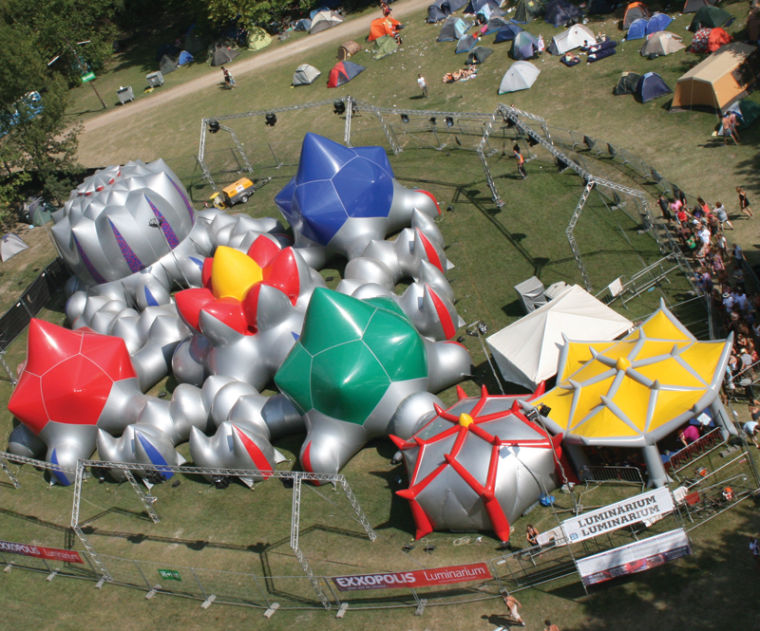 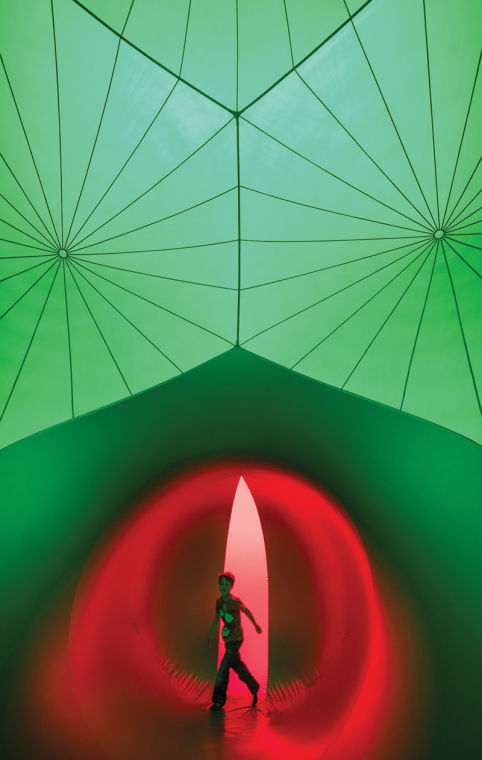 DOWNTOWN LOS ANGELES - This weekend, people passing through Grand Park will glimpse something wholly unexpected. Visitors should know they are not seeing things, and that the giant inflatable plastic geometric structure does in fact exist.

Unlike many large inflatable structures, this is not a bounce house. That said, kids and adults are encouraged to wander inside, though once there they are expected to take in the wafting colors and music with their eyes and ears, not their jumping bodies.

The attraction is called Exxopolis, and its designers describe it as a “wondrous luminarium.” The 175-foot-long, 95-foot wide, maze-like complex that will mix light, color and live music arrives to launch the 11th season of World City, the Music Center’s free series of family-oriented presentations from international performers.

“It’s very unusual and it combines music of the world with culture,” said Stephen D. Rountree, president and CEO of the Music Center. “It’s for kids and families, adults of all ages.”

Exxopolis will be on display this Saturday-Sunday from 10 a.m.-6 p.m., and again on Sept. 13-15. It will inflate on Grand Park’s Event Lawn, between Spring Street and Broadway, and will be paired with dozens of international musicians and dancers. Dubbed Random Acts of World Culture, the lineup will include performances in and around the collection of domes and tunnels.

Exxopolis is the first of seven free events that make up this year’s World City season. The other performances, which take place roughly once a month through May at the W.M. Keck Children’s Amphitheatre at Walt Disney Concert Hall, range from a Tex-Mex act to a puppet show to hip-hop violinists.

Exxopolis was created by Architects of Air, a Nottingham, England-based company helmed by sculptor Alan Parkinson, who started designing the structures he calls luminaria in 1992. The group has traveled to 38 countries to set up the exhibitions that are fashioned from translucent colored plastic. The shapes are inspired by Islamic architecture and Gothic cathedrals.

The World City event marks the first time a luminarium will be presented in Los Angeles, said Barbara Leonard, senior director of programming for the Music Center. She first learned of Architects of Air about 10 years ago when she walked through one of Parkinson’s creations in Seattle.

“It was such a magical experience and I’ve had it in my mind ever since,” she said. “When Grand Park opened I knew finally the Music Center had an appropriate area for us to put up something this size.”

Exxopolis is the 20th luminarium created by Architects of Air. According to the company website, it took six months and 55 people to make. It includes about 9,000 pieces of blue, red, green, yellow and gray plastic joined together by zippers. It takes about a day to set up, and remains upright thanks to air pumps similar to those used in bounce houses.

Shanti Freed, the Architects of Air exhibition manager, stresses that that is where the similarities to the attractions prevalent at children’s birthday parties end.

“It’s an interactive cultural environment,” said Freed. “It’s a relaxing, blissful environment. There’s no jumping, sliding or bouncing. That is quite the opposite of what this is.”

The series of tunnels and angular domes will cover a space about the size of half a football field. Its tallest point is a 23-foot-high cupola inspired by the circular space of the Chapter House of Southwell Minster, a cathedral in England.

Visitors are encouraged to walk through Exxopolis, sit inside and take in the colors, which change during the day as the sun crosses the sky.

“Sunlight will filter through the color sections and reflect off the gray,” Freed said. “From the outside it looks like an otherworldly space bubble, but when you’re inside it’s a little like being inside a kaleidoscope, or like being inside a rainbow.”

The pacific effect is accented by the music. During the five days the work is inflated there will be 80 short performances from approximately 30 groups. Just don’t expect guitars or other common musical devices — performers instead will play everything from stringed instruments such as the Brazilian berimbau and the Middle Eastern oud to the shakuhachi, a sort of Japanese flute. There will also be performances including capoeira, hula and Cambodian classical dancing.

“I wanted the people who experienced Exxopolis to also have this intimate encounter with culture,” Leonard said. “I want them to feel like the music is part of the Exxopolis experience.”

Admission to Exxopolis is free. Reservations, which can be made online, are recommended.

After Exxopolis, World City makes a 180-degree turn. On Oct. 5, the blissful rainbow gives way to the festive, polka-inspired sounds of Los Texmaniacs, a Tex-Mex band that performs Oct. 5 at the Keck Amphitheatre.

“It’s that music that’s on the border of Mexico and Texas,” said Leonard. “It’s a very rich musical tradition.”

Also performing that day will be Pacifico Dance Company, a folklorico ensemble.

On Nov. 16, the series turns to puppets and “hardcore folk” when Poland’s Tecza Puppet Theatre performs. They will be paired with the Warsaw Village Band, which plays traditional Polish music with a modern vibe.

Leonard said she is particularly excited about the Jan. 18 performance of Black Violin, a string duo that performs with a DJ to merge classical music with hip-hop.

“I really wanted throughout the years to find the right way to introduce hip-hop culture to an all-ages audience,” Leonard said. “I was so struck by them. They’re amazing classical musicians in their own right, but they found a way to merge hip-hop and classical music and they create a sound that’s so unique.”

The season ends May 17 with a nod to the American West with performances by Daughters of the Purple Sage and Wylie & The Wild West. The former is a trio that performs tunes including “Home on the Range” and “Tumblin’ Tumbleweeds.” The latter act is led by yodeler Wylie Gustafson, who works as a rancher in Montana when not belting out his “Ya-hoo-ooo” yodel. Yes, it’s the yodel made famous by Yahoo!