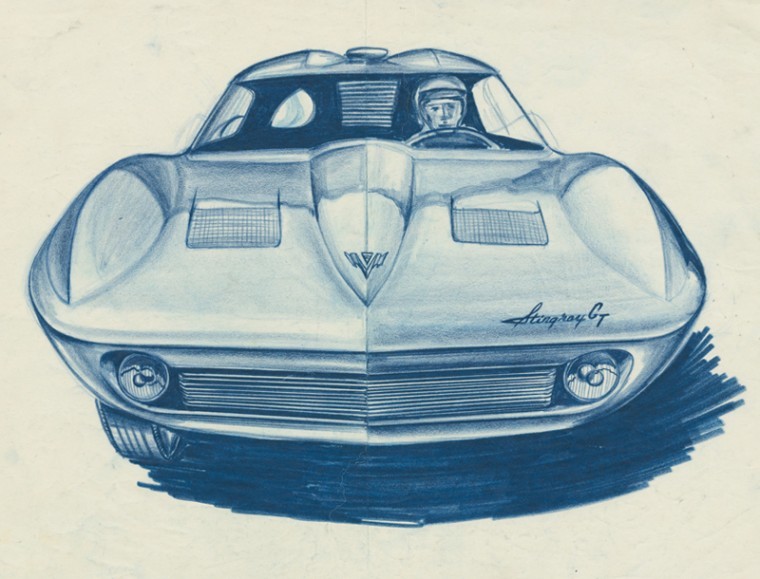 An early design of the Chevy Stingray Corvette by Lawrence Kiyoshi Shinoda is one of the hundreds of items on display in the new Japanese American National Museum exhibit Drawing the Line: Japanese American Art, Design & Activism in Post-War Los Angeles. 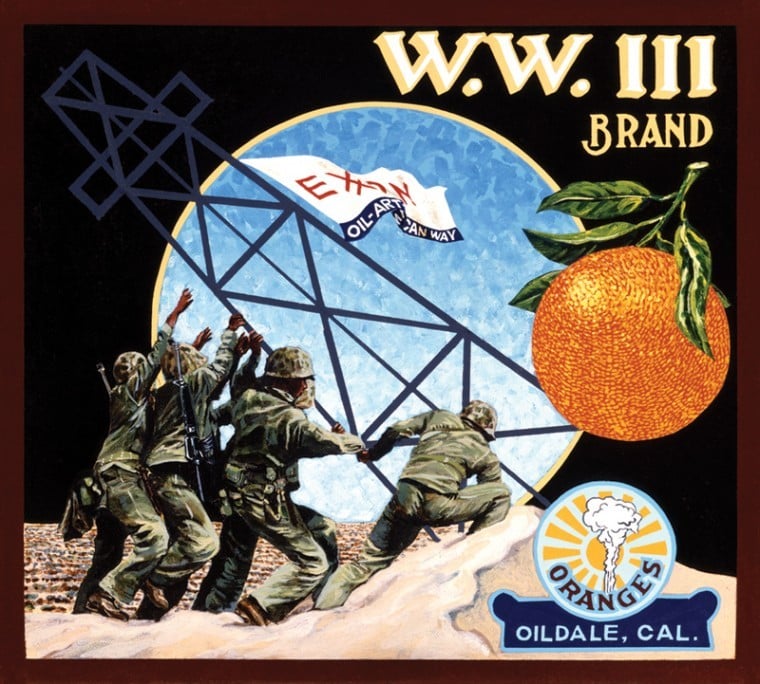 Ben Sakoguchi’s work was influenced by the bold graphics and colorful images that adorned the wooden crates that were stacked behind his parents’ grocery store.

An early design of the Chevy Stingray Corvette by Lawrence Kiyoshi Shinoda is one of the hundreds of items on display in the new Japanese American National Museum exhibit Drawing the Line: Japanese American Art, Design & Activism in Post-War Los Angeles.

Ben Sakoguchi’s work was influenced by the bold graphics and colorful images that adorned the wooden crates that were stacked behind his parents’ grocery store.

DOWNTOWN LOS ANGELES - A pristine 1963 Chevy Stingray Corvette sits on the first floor of the Japanese American National Museum. With its silver body and red interior, it acts like a magnet for museum visitors such as 28-year-old Joshua Holloway, who on a recent weekday afternoon stared into the window at the classic American sports car.

While its function is as a machine, Holloway is not the only one who thinks of the vehicle in artistic terms. That comes into play in the recently opened JANM exhibit Drawing the Line: Japanese American Art, Design & Activism in Post-War Los Angeles.

The Corvette is one of hundreds of items on display at the museum through Feb. 19. The exhibit looks at the influence that Japanese American artists, whose sense of culture and identity was influenced by the post-World War II period from 1945 to 1980, have had on the Los Angeles art scene.

The works cover a range of media and include drawings, photographs, paintings and video. Then there’s the Corvette, designed by Los Angeles-born Lawrence Kiyoshi Shinoda.

“This helps highlight the creativity of our own community, to help us understand better how Japanese Americans have contributed to pop culture,” said Chris Komai, the museum’s spokesman. “With the car it’s a perfect example of someone who contributed to our overall culture and nobody knew it. Everyone knew the Stingray, but the untold story of that is who designed it, and it turned out to be a Japanese American man.”

Birth of a Scene

The exhibit is part of the ongoing Pacific Standard Time, a collaboration organized by the Getty Foundation that has brought together more than 50 cultural institutions in Southern California. It aims to tell the story of the birth of the L.A. art scene through exhibits and programs.

Works in the JANM exhibit include painter Matsumi Kanemitsu’s Illustrations of Southern California, a collection of prints that explore his perspective on the history of Los Angeles; some photographs by filmmaker Robert A. Nakamura; a series of orange crate label paintings by printmaker Ben Sakoguchi; and a new installation by performance artist Linda Nishio, who revisits her 1981 performance Ghost in the Machine.

The exhibit also features public programs including a screening of Nakamura’s 1972 film Manzanar on Dec. 4, at a location yet to be announced.

For museum officials, Drawing the Line is an opportunity to shine a light on figures who are often overlooked.

“This exhibit really highlights a lot of artists that have perhaps not been given the attention that they should,” said Kris Kuramitsu, curator of the exhibit.

While much of the work reflects the unique experience of Japanese Americans after the war, it overlaps with the civil rights and women’s movements, as well as the anti-Vietnam war protests.

“It’s a lot of different media,” Kuramitsu said. “There is a very broad range of work and points of views from different generations and different perspectives.”

After passing the Corvette, which is roped off on the museum’s first floor, visitors walk upstairs to check out some of Shinoda’s drawings of the car. Beyond that is an abstract lithograph by Kanemitsu titled “Oxnard Madame.” It was inspired by a story the artist heard about a woman who ran a brothel yet was well connected in the community.

One of Nakamura’s photographs shows his father, Harukichi Nakamura, in 1956. He was a landscaper and is shown crouched in front of a house with a well-maintained lawn. Another photo depicts the Cemetery Monument at Manzanar, one of the 10 internment camps in the country where more than 120,000 Japanese Americans were incarcerated during WWII.

The exhibit also combines activism and art in a display of dozens of covers from Gidra, a magazine launched by five Asian American UCLA students in 1969. The monthly publication, which ran for five years, focused on political advocacy, particularly the anti-war movement, and Asian American identity.

The magazine images are on two walls in a corner of the exhibit space. Some of the covers relate to everyday issues like back to school stories with pictures of Asian American children. Others are overtly political, such as a 1972 issue adorned with an illustration showing a city under the watchful eye of police helicopters, tanks and men behind a watchtower.

“We’re really exited about bringing attention to this magazine,” Kuramitsu said. The museum has also put a few issues online.

Some of the most eye-catching pieces in the show are in Sakoguchi’s collection of small paintings modeled after old orange crate labels. The San Bernardino-born artist was heavily influenced by the bold graphics and colorful images that adorned the wooden crates that were stacked behind his parents’ grocery store. The hundreds of label paintings he created touch on issues affecting modern culture.

One painting is a re-creation of the famous WWII image of soldiers raising the flag at Iwo Jima. However, in Sakoguchi’s version, the soldiers are lifting an Exxon oil tower under a banner that reads “W.W. III Brand,” next to a bright orange.

“He grew up being exposed on a farm to fruits and vegetables, and from those experiences he was able to make his own political statement,” Komai said.

Ultimately, said Komai, the statement this exhibition makes is that art can be a declaration of identity not just for the Japanese American culture, but all the cultures that make up the city.