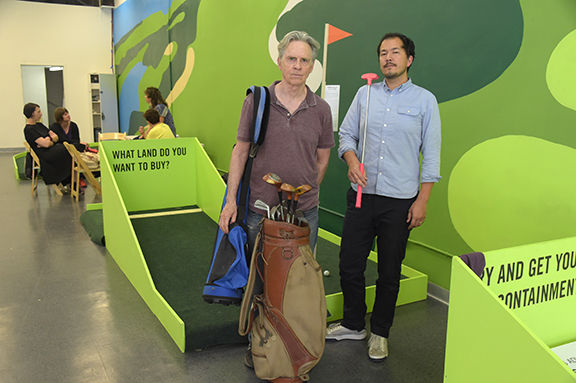 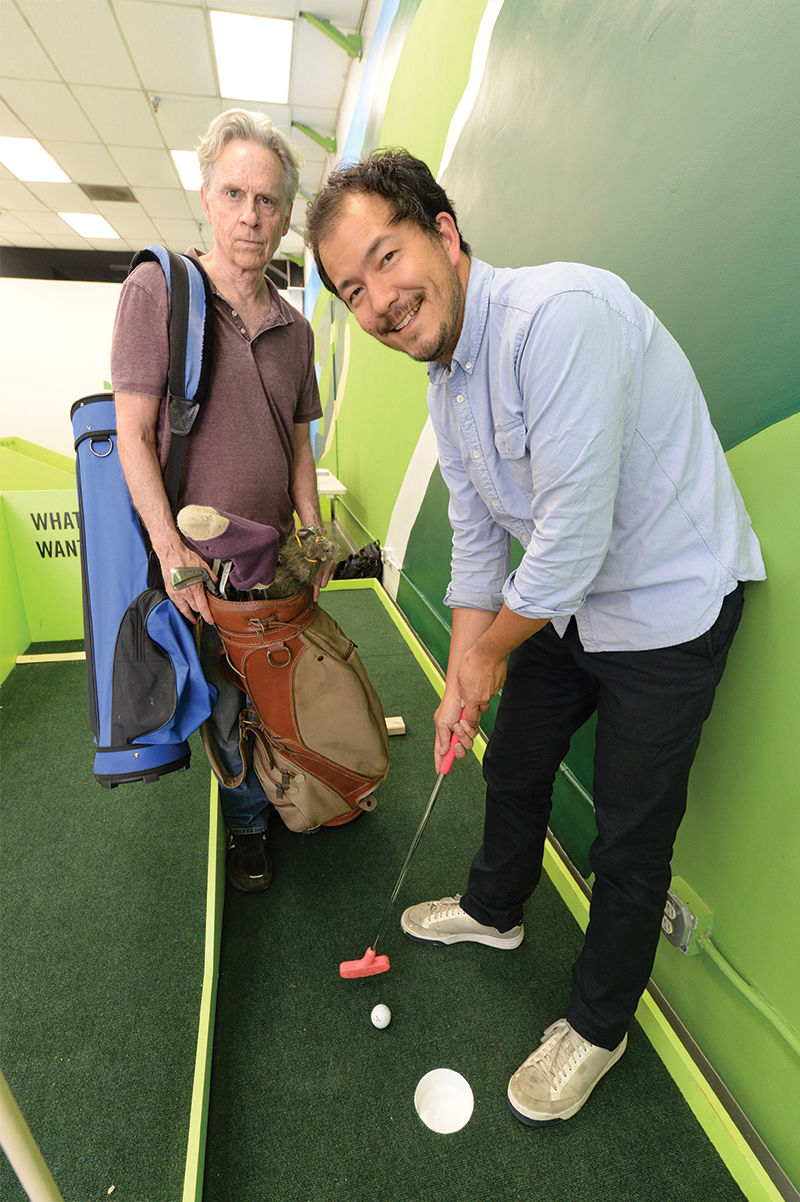 Los Angeles Poverty Department Director John Malpede and artist/academic Rosten Woo led the design of The Back Nine, a new play and exhibit that examines how zoning changes neighborhoods. 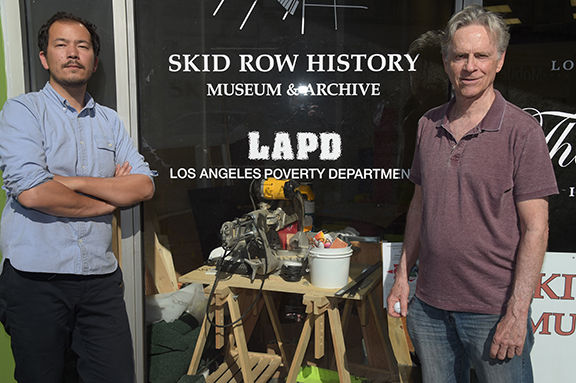 DTLA - The development process has been compared to a lot of things. Golf is not one of them.

Yet golf is precisely what the venerable Skid Row theater troupe Los Angeles Poverty Department uses in The Back Nine. The performance and exhibit, which opens this week in Downtown Los Angeles, delves into how zoning laws can improve or destroy neighborhoods. The concept is that each part of the process is like a hole in a mini-golf course.

The exhibit at 250 S. Broadway features holes that visitors can play — the course and the destination of each ball speak to the myriad challenges and consequences of zoning and its power over development. Under the surface is the implication that these decisions often happen on the privacy of a metaphoric golf course, far from the voices that actually compose the affected communities.

“‘The back nine’ is an expression for that kind of dealmaking, but the play mixes a lot of different positions,” said LAPD Director John Malpede. “There are extreme free market positions that have credence in its criticisms of zoning’s existence, and other viewpoints of how it’s a critical tool. We can feel its impacts when thinking about the future of Skid Row.”

The Back Nine runs for five performances from June 8-17, and the exhibit will be open from June 10-Oct. 31 at the Skid Row History Museum and Archive. The project is a partnership between LAPD and Rosten Woo, an artist, writer and educator who focuses on civic issues.

The space is lined with golf platforms, each with a different design and topic. Some aim to tell the history of how the “containment zone” of Skid Row came to be, while others force viewers to make decisions, as with a hole labeled “What land do you want to buy?” In the roughly 60-minute performance, a dozen LAPD cast members perform vignettes that detail the implications of certain rules and the broader debate on land use.

The LAPD was born in Skid Row and remains rooted there. Its works feature Skid Row performers and focus on issues that impact the 50-block community commonly known as the homelessness capital of the nation. Woo, meanwhile, has spent years exploring zoning and gentrification through artistic projects.

Malpede and Woo met while collaborating on a Skid Row project, and last year won a grant from the Mike Kelley Foundation for the Arts to stage The Back Nine. Woo hopes it can get people to pay attention to an oft-ignored system, especially as the city prepares its revised Downtown community plan, which will shape future growth in the area.

“Zoning changes how wealth is accumulated, but it’s very technical and opaque. One goal is to help people understand what it is, what it does, and how they can have input,” Woo noted. “But the second part is that people need to see the end result, what the stakes are. There are implications for social class.”

One part of the exhibit explores how a proposed change of zoning in much of Skid Row from “industrial” to “hybrid-industrial” — the latter allows new housing to be built — may bring residents with more money and influence than current inhabitants. Henriette Brouwers, the associate director and producer of LAPD, recalled the community’s response to a plan to renovate the Salvation Army building, a temporary shelter, into micro-lofts that were billed “affordable.” Little consideration was given to the people using the space, or lined up outside in tents, she said.

“There’s a scene where we have a developer talking about how they want to fix up a stretch of Skid Row. That’s real, but residents agree that yes, they too want to get rid of tents and trash and take people off the street,” Brouwers said. “Some people in power can’t imagine the community here would want some of the things they want, too, and don’t bother communicating.”

The LAPD itself has felt the changing tides of the Downtown real estate market. Last year it had to move the Skid Row History Museum out of the Broadway Mall at 440 S. Broadway because a new owner was planning a multi-million dollar renovation. Such shifts have caught the attention of LAPD cast members like Tom Grode, a writer and Skid Row resident who is nursing a new fascination with city planning.

“We want to destroy the deserved opinion of zoning as being boring. Some of the most fascinating work is happening here, in Downtown,” Grode said. “Develop is a dirty word to some people, yet Skid Row desperately needs to be developed. In what way, though? Increasing the number of trash cans is a form of development, too.”

Grode and Brouwers joke that the thicket of controversy around the communications of President Donald Trump — famous for his literal golf-course dealmaking — make it a particularly fitting time to examine not just zoning rules but who makes them, and how development is affected by pay-to-play schemes where politicians receive huge contributions to influence planning decisions.

These stakes and implications may not be the entire focus of The Back Nine, but Woo and Malpede hope the play and exhibit inspire people to read into planning rules, as well as between the lines. Changing the makeup of what projects exist in a community also changes who speaks for it. If Skid Row really transitions to a mixed-income area, Malpede wonders, will the older, poorer residents remain minority voices?

It’s one of many issues to consider as you try to hit a ball into a hole.