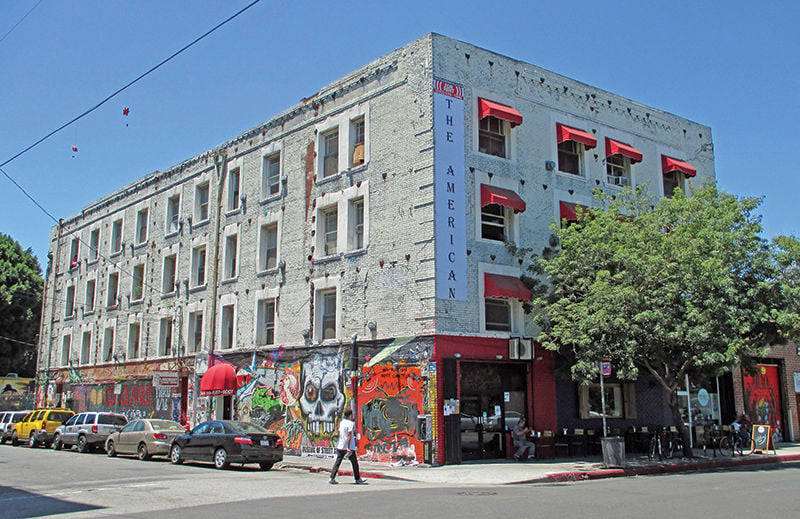 The American Hotel originally opened in 1905. Although known to many as a hub for artists and for once housing punk club Al’s Bar, it debuted as the first and only quality hotel for African Americans in Los Angeles. The property’s history is traced in Tales of the American, a film by Stephen Seemayer. It screens this week at the Downtown Independent theater. 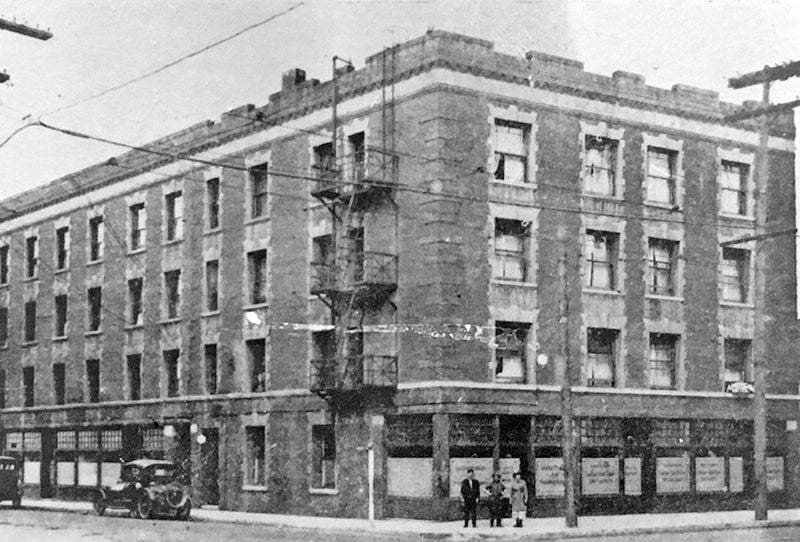 DTLA - In the eastern portion of Downtown Los Angeles, at the center of what is now known as the Arts District, rests the American Hotel. Given the burst of construction in the community, with modern apartments and copious new eating establishments, the four-story, brick-lined structure at 303 S. Hewitt St. seems unspectacular.

Filmmaker Stephen Seemayer sees the building differently. In the American he glimpses a structure that has traced the evolution of Los Angeles, from serving as a hub for various minority communities over the decades to becoming a destination for artists during the Reagan years. Many in Downtown know the American as the former home of the punk club Al’s Bar.

Through it all, over the course of more than a century, four name changes and close to a dozen different owners and operators, the American Hotel has served as a sanctuary for those on the fringes of society, Seemayer believes.

“I’ve always thought of this as a building for the other,” Seemayer said during a recent interview in the Arts District, pointing toward the 113-year-old structure. “And when I say the other, I mean the marginalized people in American society.”

Seemayer and his wife, Pamela Wilson, hope to disseminate that message. After five years of digging through city archives, and collecting the stories of people who have called the hotel home, the pair is ready to premiere their findings via the documentary Tales of the American. It opens at the Downtown Independent theater on Friday, March 30, and will screen through April 5.

“The motivation for us to a large extent is just to preserve for posterity the incredibly exciting community that we were a part of for the past 30-40 years,” said Wilson, who served as the film’s writer and editor.

A Cast of Characters

The film opens with artists likening the hotel to a vortex, intercut with a spinning aerial shot of the building. Soon the voice of KPCC radio personality John Rabe, who serves as the narrator, sounds. Rabe paints an image far removed from the glitz seen in many of the new Downtown high-rises.

“There is no doorman, no concierge, no mints on the pillow,” Rabe says. “This is a no-frills haven for creativity at the heart of Downtown L.A.’s Arts District.”

He adds, “The American Hotel has been a last resort for some, and a new hope for others.

Over the course of 107 minutes Tales of the American recounts the history of a building that opened in 1905 as the first and only quality hotel for African Americans in Los Angeles.

“We were shocked to find that out,” Seemayer said. “What we didn’t even know when we lived here was that you are standing at ground zero of the first African-American neighborhood in Los Angeles.”

The film reveals how, in the early 1900s, its ground-floor space served as a hub for an unknown musical style that would go on to be called jazz. The movie follows the city’s demographic changes, detailing the building’s heavy concentration of Japanese Americans before tens of thousands of U.S. citizens were sent to internment camps during World War II.

After two decades as a flophouse the hotel became a center of the arts scene, offering cheap lodging while moonlighting as a launching pad for musicians passing through the often-raucous Al’s Bar. A number of rock legends including Rage Against the Machine, Nirvana and Sonic Youth played there.

Seemayer and Wilson conducted 149 interviews for the film. They estimate that they spent about $45,000 making the movie. They even brought aboard the crime writer Michael Connelly, a former colleague of Wilson’s at the L.A. Times, to serve as executive producer and a sounding board.

Seemayer himself was sucked into the Arts District whirlpool in 1976, attracted like many others of the era by dirt-cheap rentals. Just 22 at the time, Seemayer was able to rent an entire abandoned 16-room hotel on Central Avenue for $150 a month.

Wilson would migrate from the Valley to the fourth floor of the American four years later while attending Otis College of Art and Design. The pair would meet in 1981 while Seemayer was shooting Young Turks, a film depicting the arts scene of the 1970s and ’80s through the lens of a Super 8mm camera. Decades later he re-edited it, and a new version was released in 2013.

Tales of the American recounts some of the multitudes of characters who gave the hotel its flavor, from George Zarvis, the former wheelman of a bank-robbery crew, to the wild cast of patrons of Al’s Bar. It provides a stark glimpse of the pre-2000s Arts District.

The hotel had an audience, but over the years a lack of maintenance also resulted in a steady decline. Then, in 2013, Mark Verge purchased the building, likely saving it from the business end of a wrecking ball. At the time, the property was in a complete state of disarray.

While shooting for the film, Seemayer said that it wasn’t uncommon to see flakes of plaster and mortar peel from the walls.

Verge reworked the bathrooms and updated some of the amenities, including the skylights that illuminate the hallways. It still has shared bathrooms, just now without a century’s worth of grime.

Verge said that many of the people who resided in the American before he acquired it still live there.

“We were trying to bring it back to life,” Verge said. “I think that’s the key to that place. The whole area needs to keep the people that were there.”

Seemayer and Wilson like the building, but have less affection for the overall change in the area, where some new apartment complexes now rent for more than $4 per square foot. Many of the longtime artists have been priced out of the Arts District.

“We actually saw it day-by-day,” Seemayer said. “All of a sudden, what we saw it turn into was a tourist area.”

“At first we kind of resented it,” Wilson added. “We wanted it to still be this kind of place that we knew, but, when we went back and found out all of the history of the hotel, and what it was like in 1905 and ’23 and ’46, we were grateful that [Verge] had rescued it.”

Other changes seem to better fit with the community. Last year muralist Kent Twitchell affixed his updated “Ed Ruscha Monument” to the side of the American. Twitchell got an invitation to do so from Verge, and now a 30-foot-tall image of the prominent California artist gazes down at the Arts District.

It’s another chapter as Seemayer and Wilson help preserve the stories of those who made the hotel worth saving.

“If we didn’t, nobody was going to tell that story,” Seemayer said. “Everyone has these personal stories and they just fritter away like so much smoke.”

Tales from the Americanscreens March 30-April 5 at the Downtown Independent, 251 S. Main St. or