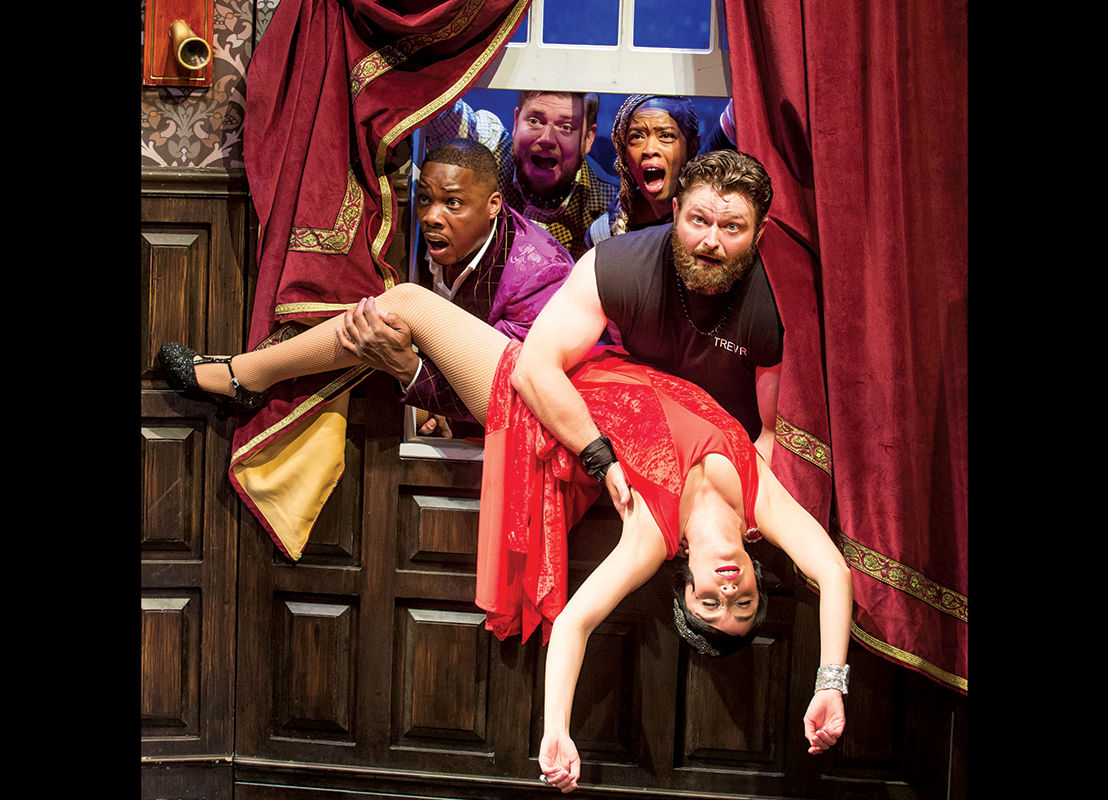 In the pratfall-filled The Play That Goes Wrong, a farce is built around a murder mystery that unspools in both expected and surprising ways. 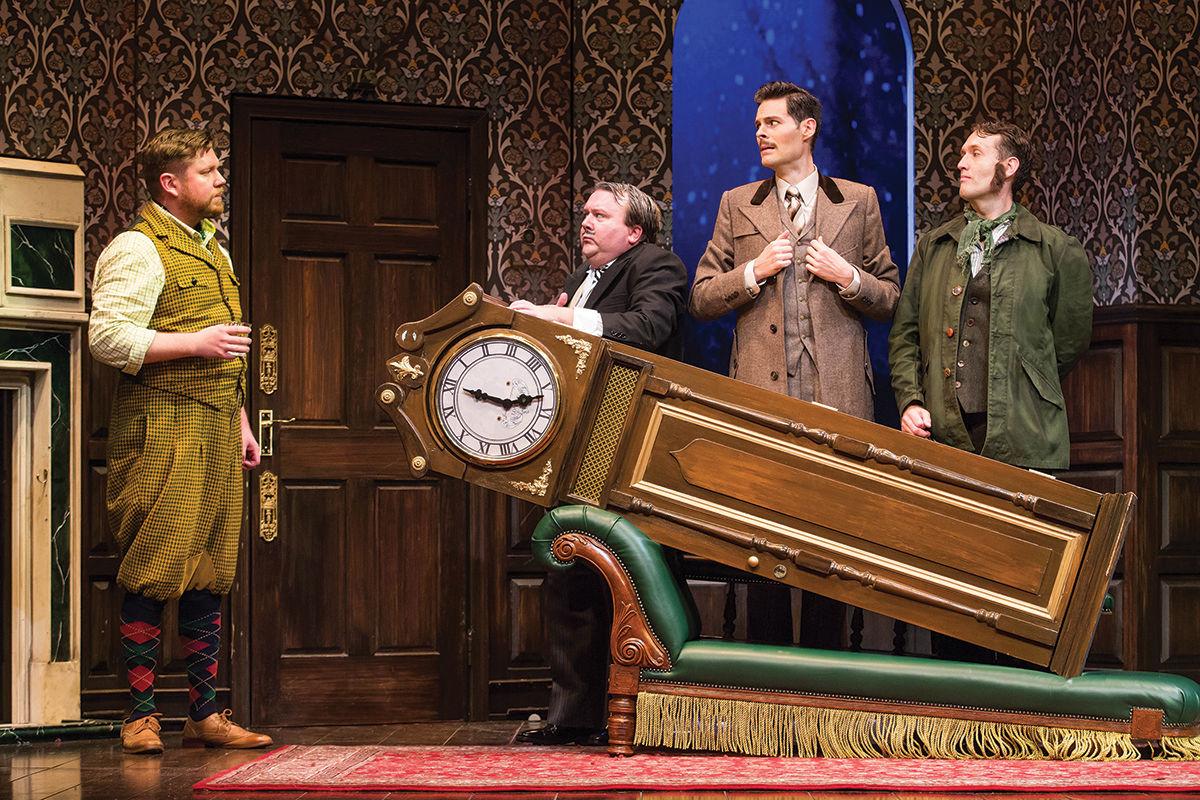 The Play That Goes Wrong is full of hilarious pratfalls, line flubs and other mistakes that would make a theater company cringe.

Almost all successful comedic farces begin with realistic situations and properly motivated characters who gradually become more exaggerated until they reach a fevered pitch of ridiculousness.

The creators of The Play That Goes Wrong, running through Aug. 11 at the Ahmanson Theatre in Downtown Los Angeles, tossed that school of thought out the window — along with almost everything else, including a few bodies — by beginning at wonderfully ridiculous and seeing how far they could go from there.

Dozens of intricate slapstick setups and a seemingly endless cascade of carefully constructed flubs fly so fast and furious that it’s hard to remember which moment is causing the riotous laughter.

While it’s a bit too long in the first act, it’s easy to forgive a show that clearly is designed for fun — and nothing else.

Created originally as a 45-minute piece by Henry Lewis, Henry Shields and Jonathan Sayer, The Play That Goes Wrong premiered in London seven years ago. It’s still a hit on the West End, and ran on Broadway for almost two years.

Now on a U.S. tour, this show’s simple concept can appeal to almost any demographic, including children about 10 or older.

As explained up front in the fake program provided inside the real one, the hapless Cornley University Drama Society has managed to take its production of the melodramatic mystery The Murder at Haversham Manor on the road.

The laughs begin before the audience settles as stage manager Annie (Angela Grovey) and tech guy Trevor (Brandon J. Ellis) are on stage trying to fix a broken door and a mantle that keeps falling.

Next, Chris Bean (Evan Alexander Smith), the director and star (not to mention the designer, the prop maker, the dialect coach, the box office manager, etc.), gives a speech before the show and explains to the audience how this is the first production where the company has had the correct number of cast members, unlike past efforts such as its revised version of the hit musical Cat.

If those preliminaries don’t make it clear, an early lights-up finds Jonathan (Yaegel T. Welch) falling across the stage to get to his spot as a corpse. Don’t worry. It’s not the only time he appears less than dead.

The plot of the mystery concerns a man murdered on the night of his engagement party. The suspects are his brother, his fiancé and her brother, the butler and the gardener. Chris portrays a local inspector who comes to investigate.

Each member of the cast is more inept than the other. Dennis (Scott Cote), as the butler, writes hard-to-pronounce words on his hand — and then mispronounces them. Sandra (Jamie Ann Romero) over-emotes every line as the fiancé. Max (Ned Noyes), the corpse’s brother, mugs to the audience for laughs.

As bad as the fake cast is, the entire real cast is a remarkably skilled ensemble, delivering Buster Keaton-like falls and collisions (several actors have been injured doing this show) that elicit winces along with laughs. Smith delivers the most brilliantly hilarious moment in the first act when he breaks character.

Even if some sight stunts are easy to predict, others are shocking, and they employ surprise elements of the Tony-winning scenic design by Nigel Hook.

From start to finish, this is a staging marvel. Tour director Matt DiCarlo — working off the original direction by Mark Bell — juggles elements across the entire stage in an explosion of several simultaneous visual and audio gags. There’s even some intermission melees near a snack bar if you are lucky enough to run across them.

The Royal Ballet Dances Back into Downtown

All this praise aside, it’s important to know that if silent-movie style physical humor and reality-defying mistakes are not your thing, then The Play That Goes Wrong is likely not for you. If you’re not laughing in the first few minutes, this is going to be a long night.

Many people unfairly compare the show to Noises Off!, the modern farce masterpiece about playmaking. This isn’t that show, nor is it trying to be.

Instead, The Play That Goes Wrong has no hidden agenda. It’s not delivering a message. It’s simply proving that sharp physical comedy is timeless and universal — and a momentary antidote to the often harsh challenges of reality.

The Play That Goes Wrong runs through Aug. 11 at the Ahmanson Theatre, 135 N. Grand Ave. or centertheatregroup.org.