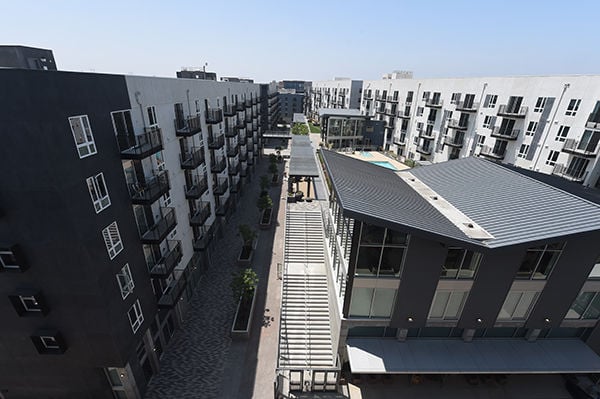 The five-building Aliso, from Legendary Development and Brookfield Properties, adds 472 apartments to the Arts District. They are arranged in five buildings placed around a central courtyard. 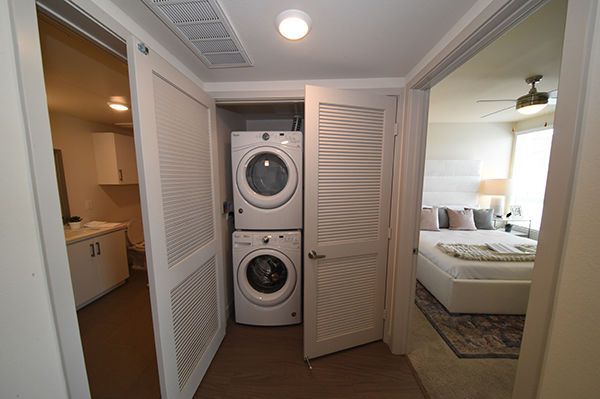 The Aliso has studios to two-bedroom apartments, as well as 42 live/work units. Prices average $3.50 per square foot.

In recent years a lot of attention has focused on the Arts District, as the once sleepy neighborhood has attracted a slew of housing, cultural and culinary projects. But almost everything that has come online in the past decade pales in comparison to The Aliso, a five-building complex at Third Street and Santa Fe Avenue that has 472 apartments.

Coincidentally or not, that time period — a decade — is almost as long as the developer has been trying to get the project built.

The massive effort comes from Legendary Development, which initiated the project, and its partner Brookfield Properties. Move-ins began in February at the complex at 950 E. First St., on six acres adjacent to the SCI-Arc campus and across Third Street from the Hauser & Wirth Los Angeles gallery. Fairfield Residential is the property manager.

Designed by Kava Massih Architects, the buildings are now all open. The project is currently about 14% leased.

Dilip Bhavnani, managing partner with Legendary Development, would not disclose the full budget for The Aliso, but acknowledged that costs went $21.5 million over the initial plan (an early figure had the price tag at $215 million). He said this resulted from changes the development team made to suit the wave of people moving in to work in the creative and tech industries opening at the eastern edge of Downtown.

Legendary acquired the site in 2010 after a previous owner’s plan to build condominiums fell apart in the recession. Legendary presented its initial plans a year later, faced community backlash over a design that included a faux brick exterior and a new alley for cars, then went back to the drawing board.

The project broke ground in early 2016. Bhavnani, who is also working on an office tower adjacent to the A+D Museum in the Arts District, said that as the Arts District changed, so too did The Aliso. The biggest shift involved adding amenities.

“When we looked at the area, from start to finish, we made a lot of upgrades along the way,” he said on a recent tour of the project. “We understand that things have changed in the Arts District and that people want a higher level of experience.”

The buildings, which are all five or six stories, are arranged in an oval pattern around a central courtyard. The largest building, on the west side of the project, houses The Aliso’s amenities including a pool deck. On the east side of the site, adjacent to SCI-Arc, a paved paseo links Third Street to Traction Avenue. This allows direct access to the nearby street, rather than the roundabout routes people would need to walk between them. The paseo was added after the community outcry, replacing a path planned for vehicular use.

Miguel Vargas, executive director of the Arts District Business Improvement District, expects the project to have a major impact on the community, as it is the first large-scale development to open in about three years. The most recent similar additions were the nearby One Santa Fe, which has 438 apartments and opened in 2016, and the Garey Building, a 320-unit project that debuted in 2016 at 905 E. Second St.

“With just the size of this project, people are going to feel the impact, whether it’s residents or visitors coming to patronize the businesses,” Vargas said.

The size also stands out for Dana Brody, senior vice president for capital markets with the real estate brokerage firm Jones Lang LaSalle, which was not involved in the development. She said that while numerous projects are underway in the area, having a large company like Fairfield Residential — a company active in 17 states as well as Washington, D.C. — invest in the community demonstrates viability and demand.

“We’ve seen larger developers like Fairfield coming to the Arts District. That’s a huge change,” Brody said. “And this is large enough and has the retail component to make a real insular community, in a way that there hadn’t been before.”

The project has studio to two-bedroom apartments. Units have quartz countertops, electric stoves, LED lighting and washer and dryer systems; there are different finishing options, depending on a resident’s tastes. A 479-square-foot studio starts at $2,330.

Rents average $3.50 per square foot, according to Steve Basham, managing analyst with the real estate firm CoStar. He said that the price is slightly below other buildings that came online in the last year in Downtown; some had rents of $4.50 per square foot.

Bhavnani said that he expects the project will appeal to people working for the technology and media companies that are relocating to the Arts District; he cited Warner Music Group and Spotify specifically. He also thinks that The Aliso will bring in empty nesters, as well as students attending SCI-Arc.

Most of the amenities are in the building on the west side of the project. In addition to the pool and the deck with cabanas and a hot tub, there is a two-story gym, game room, lounges with full kitchens and play areas for dogs. All buildings have landscaped rooftop decks.

Some features are unusual. The Aliso includes a recording studio, a “green screen room” for people working in creative industries, and a karaoke room. Bhavnani said those were added to appeal to the changing demographics in the area.

Basham said that The Aliso is likely not a catalytic project for the Arts District, but rather one that points to the demand for new residential options in the area. He said the complex reshapes Third Street and Santa Fe Avenue, a point Vargas echoed. The intersection had already been emerging as a destination with the opening of shops and restaurants.

“Now the main drag is going to be extended more,” Vargas said. “People were walking over. The Aliso further completes this main retail stretch. Third and Seventh streets are very clearly the centers of attraction in the Arts District.”

The project comes online at an interesting time in the Downtown residential market, according to experts. Basham said The Aliso follows the debut of a wave of projects that brought about 3,000 units to Downtown, many in South Park neighborhood.

The Aliso comes at the tail end of that wave, he noted, but it may only been an indicator of what is to come in the Arts District.