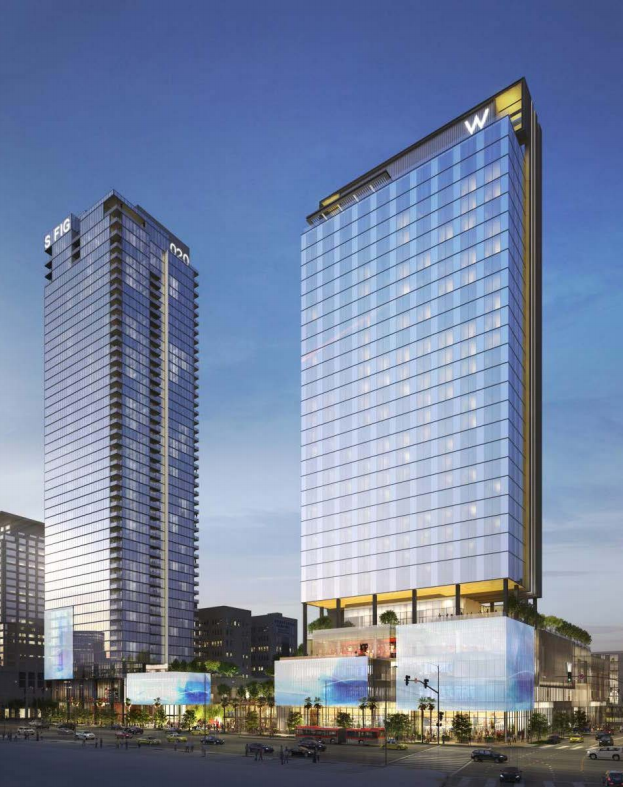 The new design for Shenzhen Hazens' project along Figueroa removes one residential tower, leaving a 435-unit high-rise and a 300-room hotel tower at the site. 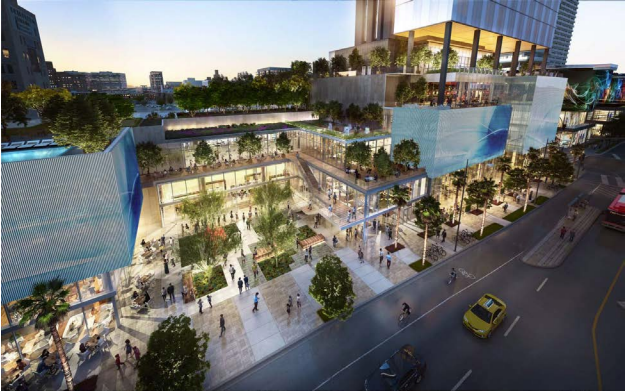 The redesigned Shenzhen Hazens project loses one tower and removes a contiguous ribbon of LED signage.

The area around L.A. Live is booming with projects from Chinese developers, with the Metropolis and Oceanwide Plaza sites in deep construction. Another long-awaited mega-project, this one from Shenzhen Hazens on the site of the Luxe City Center Hotel, appears finally to be moving forward, though not to the scale previously envisioned.

Representatives of the project last week announced that the three towers previously planned for the 2.6-acre parcel at 1020 S. Figueroa St. have been reduced to two. The project is still in the environmental review phase.

Plans are still in the works to bring a 29-story W Hotel to the site at the northeast corner of 11th and Figueroa streets. The hotel will actually be larger than previously anticipated, going from 250 to 300 rooms.

The bigger change is the loss of a 32-story residential tower. Instead, all of the housing will be in a single 38-story building. There will be 435 condominiums, down from the previous 650.

The changes were presented to the Downtown Los Angeles Neighborhood Council’s Planning and Land Use Committee on Tuesday, May 16. Representative of Shenzen Hazens and its architect, the Downtown office of the firm Gensler, revealed a redesigned project that is 24% smaller than the development first unveiled in 2015. The changes came in response to community input, according to Mason Situ, general manager of the Shenzen Hazens Group.

“We tried to address those concerns,” Situ said. “We are still at an early stage. We’re still trying to fine-tune the design.”

One primary community concern was the light from LED signage, according to South Park Business Improvement District Executive Director Ellen Riotto. The project is expected to have about 21,200 square feet of LED signs. Riotto said the glare and brightness could impact nearby residents and businesses.

“Light pollution can go farther with these towers, and that’s always a concern,” Riotto said. “I was frankly surprised by how accommodating Hazens has been on this. They’ve put in the time to see this addressed.”

The new design reduces the digital signage component by from a previous 60,000-square-foot ribbon of lights. Instead of a wraparound light system, the new design breaks up the signage between the towers

The site currently houses the nine-story Luxe Hotel, which would remain open while the first phase of construction, the W Hotel, is built. The hotel would then be razed and replaced by the residential tower.

Situ said that the changes do not affect the project’s budget, which remains at $700 million.

Another change will involve extending the project’s podium to where the third tower would have gone. This will now hold a large ballroom serving the hotel. The development is also adding two new public plazas, along 11th Street and Olympic Boulevard.

These sorts of changes during the planning phase are common, according to Mark Tarczynski, executive vice president for the real estate firm Colliers. He predicted that even with a size reduction, the Shenzhen Hazens development will still play a prominent role along Figueroa Street.

“All of those mega-projects are going to have a huge impact on Downtown L.A. for the positive,” he said. “This one is going to be part of another wave of construction, and I think it’s going to add a lot to that part of Downtown.”

Situ said that the developers are still seeking entitlements for the project. No groundbreaking date has been announced.