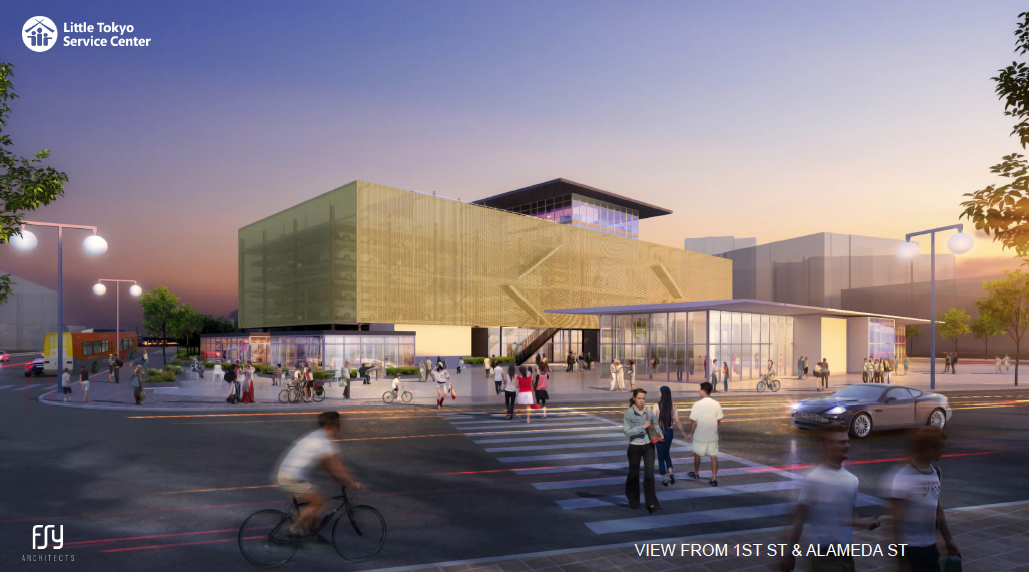 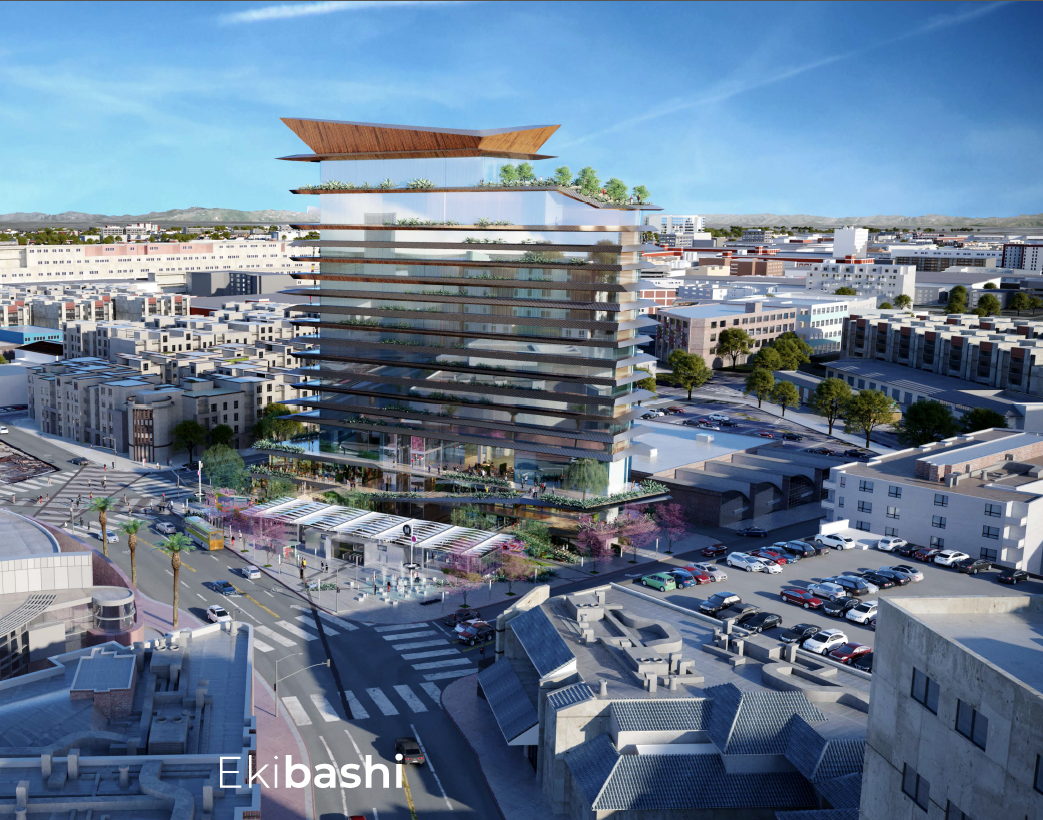 Ekibashi (which translates to Station Bridge in Japanese), is the only proposal to feature hotel units as part of the design. If selected, the project would bring 150-units to the neighborhood. 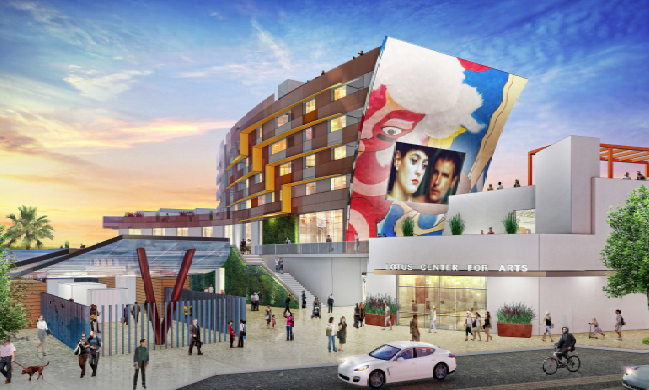 Innovative Housing Opportunities' design is the only one to include affordable housing units. 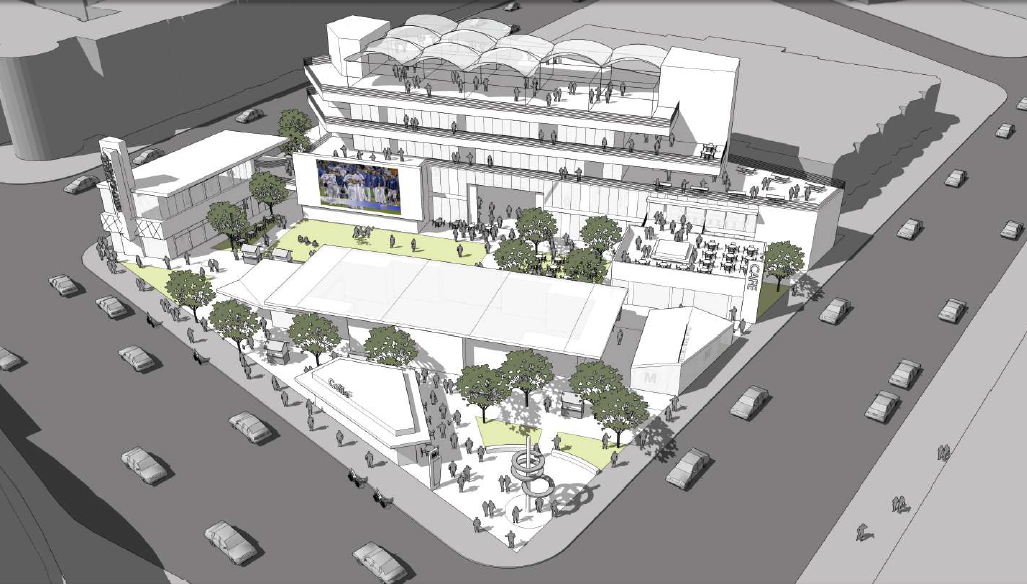 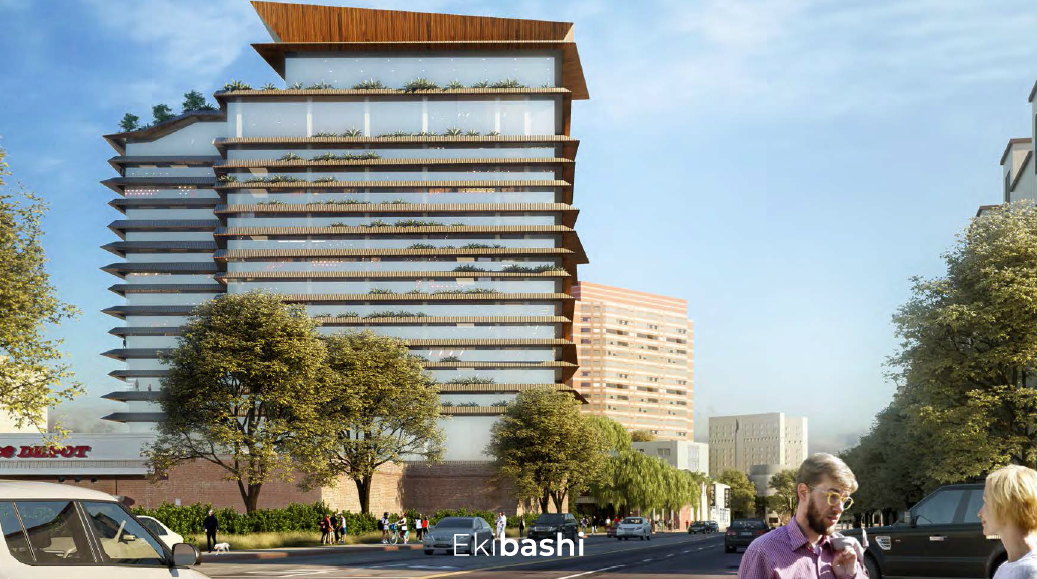 In 2014, construction crews began work on one of the region’s most ambitious transportation projects, the $1.75 billion Regional Connector.

Meant to weave together three different rail lines to allow riders to ride from East Los Angeles to Santa Monica, or Long Beach to Azusa without switch trains, the massive 2.1-mile subway project beneath the streets of Downtown will see the construction of three new rail stations, one of which is the Little Tokyo/Arts District Station at First Street and Central Avenue.

Construction has been ongoing at the site for nearly five years, but soon, the community can expect to see a whole new round of work at the 1.2-acre site.

Bounded by Central Avenue, First Street and Alameda, the site was pegged for development by Metro in August 2018. In January, Metro received eight different responses from interested parties, which was later whittled down to the top four teams in June. This August, proposals were sent in.

The designs are not final, and could change in scope once the final design team is selected, but provide the first real look at how the Little Tokyo/Arts District station could develop.

Community members were asked to provide feedback, which was recorded by Metro staff and will be presented to each design team.

Each project has a separate budget and Metro hopes to recommend a developer to the Board of Directors in early 2020. The Regional Connector is expected to open in mid-2022.

The designs from the team of the Little Tokyo Service Center and FSY Architects show a station featuring ample green space, highlighted by a six-story, multi-functional building that will house a restaurant, gallery, retail and community space.

“From the onset we envisioned that the building would help create a social, cultural and community hub with a unique and iconic gateway for Little Tokyo, the Arts District and Downtown Los Angeles” Hector Rodriguez, designer at FSY Architects, said.

Early plans also call for spaces for LED screens for outside screenings, a 1,000 square-foot mobility hub, where people can work on their bicycles or other modes of transportation and a visitor’s center of the same size.

A multi-level automated parking space is also included in the designs. Portions of the restaurant and office space will rest on top of the aboveground parking lot.

Past Meets the Future

Centre Urban Real Estate Partners’ concept focuses on melding elements from Little Tokyo and the Arts District’s past with the future, according to Martin M.Q. Nguyen, principal at the Downtown-based development firm.

“This is a key site and key player to both Little Tokyo and the Arts District,” Nguyen said during the presentation. “This is the crossroad of the historic and traditional history of Little Tokyo, yet the start of the innovative and new concepts that come out of the Arts District.”

Centre Urban’s vision for the site, alongside their development partners, Stantec and Kritzinger & Rao, features 20,000 square-feet of creative office space spread across a two-floor building. Visitors will have to cross a large lawn to enter the offices, which will be focused on independent start-ups from the community.

An “urban village” will anchor the offices, Nguyen said. A total of six independent retail spaces totaling 2,500-square-feet, a 3,400-square-foot restaurant and an 18,000 square-foot “food village” than can house 22 different stalls and a bar will make up the village.

There is also a 1,700-square-feet space for a historic cafe on the Central Avenue side of the site. During the meeting, Nguyen floated the idea of the space eventually holding a revived Atomic Café. The legendary cafe’s historic brick building sat at the construction site for 100-years before being demolished in 2015 to make way for the new station.

Additional features include a 500-square-foot mobility hub, a “smart market,” and potential for a rooftop event space.

Dubbed Ekibashi (“station bridge” in Japanese), the tower would loom over the adjacent Office Depot, and is the only development that would include hotel units. The design indicates a 180-room hotel, space for art galleries and commercial condos that would prioritize legacy businesses from the Little Tokyo community.

Jon Kaji, president of the Little Tokyo-based Kaji and Associates, said that the project could be an iconic landmark for not just the Little Tokyo community, but for the greater Los Angeles area as well. He also highlighted the importance of the project’s hotel and retail options.

The tower is mostly glass and renderings show an ample amount of pocket gardens on each floor of the building. A large stairwell takes visitors from the ground floor of the station, to the commercial space, where they can either enter the hotel, or continue on to their designation.

The project from the team of the nonprofit Innovative Housing Opportunities and Dahlin Group is called Lotus@First and is the only project of the four to include any type of housing component.

The project’s primary feature is a slightly curved, seven–story building that would house community space, creative galleries, and the project’s housing units for moderate to low-income residents.

Rochelle Mills, president of Innovative Housing Opportunities, said that the project draws inspiration from Little Tokyo’s slew of cultural festivals and the traditional architecture, as well the brief period of time during and after World War II when the neighborhood was called Bronzeville, for its mix of African American and Japanese residents.

Renderings show a colorful building, with space for art and outdoor screenings. The building is raised in a way that allows visitors to walk through the plaza, under the building and on to their destination. A building that is earmarked as the Lotus Center for the Arts would also hold a rooftop garden and lounge space where visitors can sit and eat lunch or catch a screening.

“One of the things that are missing in Downtown Los Angeles is a place to just be,” Mills said. “There are a lot of things that people are planning, but what happens when you’re on lunch, and have a sandwich in your hand and just want to be somewhere?”