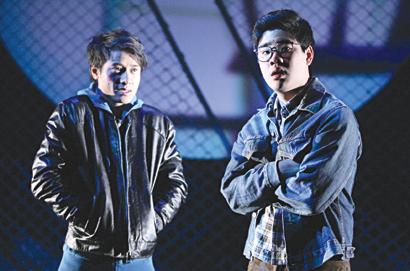 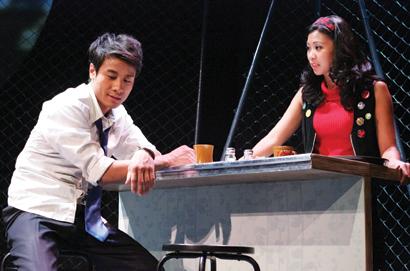 Huynh with Christine Corpuz, who plays a woman in love with her gay friend. Photo by Michael Lamont.
1 of 2

Huynh with Christine Corpuz, who plays a woman in love with her gay friend. Photo by Michael Lamont.

DOWNTOWN LOS ANGELES - Mystery can mean more than simply knowing whodunit. The deeper mysteries occur when the surface answer is revealed, but the “why” of a situation remains clouded.

In the case of Mysterious Skin, which received its L.A. premiere at East West Players last week and continues through Oct. 10, no one is likely to be surprised by the plot twists. This is the case even though playwright Prince Gomolvilas attempts more obscurity than the original source material, Scott Heim’s 1995 novel, and the 2004 Gregg Araki film of the same name.

Gomolvilas keeps huge chunks of the action and dialogue, but tweaks the sequencing to add both a detective-style storyline and richer sci-fi fantasy overtones. These changes, most of which take place in the first act, give Mysterious Skin a personality crisis, which director Tin Dang seems to attempt to overcome with sheer speed and an array of impressive technical effects. But crucial character development is sacrificed, as is a strong through line.

Still, the emotionally draining second act outweighs earlier shortcomings, thanks in part to powerhouse performances by David Huynh and Scott Keiji Takeda as two young men from a small Kansas town. They share a psychologically devastating past, which sent them down quite different paths.

The road traveled by recent high school graduate Brian (Takeda), who in 1991 still lives in Kansas with his mother, is filled with extraterrestrials. After watching a show on alien abduction, Brian is convinced that happened to him twice as a child when he blacked out for several hours.

Brian tries to get to the bottom of his blackouts by befriending Avalyn (Elizabeth Liang), who he saw on TV talking about being abducted. Both friendless and dismissed by others as kooky, the pair form an immediate bond.

At the same time in New York, Neil (Huynh) is earning a living as a hustler, which he began in Kansas as a 15-year-old having sex for money with older men. Neil’s best friend Deborah (Christine Corpuz), who has a tendency to fall for gay men, has been in love with Neil since they were teens. Now she worries for his safety in such a dangerous profession.

Though Brian doesn’t remember Neil, he keeps having dreams of them both being abducted, which he hopes means that Neil holds the answers.

Gomolvilas’ attempt to shift the tone toward mystery is half-hearted. Too many hints at what’s going on are dropped, so there’s little intrigue. The quick understanding that aliens are not going to land on the Little Tokyo stage removes that layer as well, rendering several scenes unsatisfying.

Not helping matters is Dang’s rapid-fire pace, epitomized by a first-act scene between Neil and Deborah, which does little to engender sympathy for the suffering Neil.

Instead, the tone is more successfully set by Jeremy Pivnick’s stark, shadow-filled lighting and Alan Muraoka’s projections of pertinent still images, some of which are out of focus to mirror Brian’s fuzzy memory.

Also, John Zalewski’s eerie and downright startling sound design has people jumping in their seats with an aural explosion preceding each flashback.

In the second act, all of the elements come together and work in harmony. Dang slows the action and allows the competent cast a chance to explore the quirky characters.

Most impressive is Takeda, who in his professional theater debut displays raw, natural sorrow as the troubled Brian. His despair at not knowing his past is palpable. He is complemented by Huynh, who ably handles Neil’s slow descent into regret and depression as he understands how past mistakes can keep growing.

Dang, who serves as East West’s artistic director, said the play was chosen, in part, to attract a younger crowd that might not normally come to the theater, even though the graphic language and nudity could turn off some of the company’s subscribers. But Mysterious Skin can appeal to everyone who has ever felt out of control, even if they haven’t shared these exact experiences.

Dang loses opportunities to mine the script’s emotional depth by not allowing for space between the words. But there remain plenty of compelling scenes that make this a worthwhile journey. The “why” of the events may remain unresolved, but the weighty questions spur post-curtain discussion.

Ed. note: An initial version of this story incorrectly referred to Neil as Nick.

Consider This: Fear of landing: Falling is easy

“The first thing you need to know is that flying is easy. It’s landing that can kill you.” As a newbie broadcast reporter for a spoof news program in Sacramento, I got the best — and scariest — assignments.