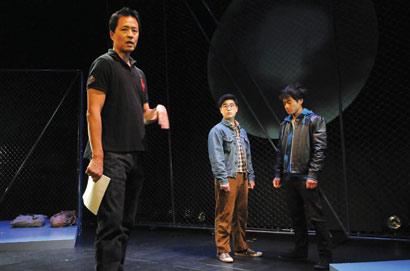 The play has something not usually seen at EWP’s David Henry Hwang Theatre: nudity. It is part of company head Tim Dang’s (front) effort to prove that the 45-year-old troupe is still contemporary and relevant. Photo by Gary Leonard. 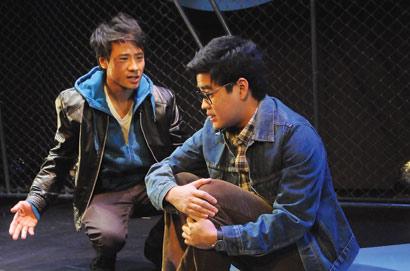 The play has something not usually seen at EWP’s David Henry Hwang Theatre: nudity. It is part of company head Tim Dang’s (front) effort to prove that the 45-year-old troupe is still contemporary and relevant. Photo by Gary Leonard.

DOWNTOWN LOS ANGELES - Mysterious Skin, the first play in East West Players’ 2010-11 season, is probably not what longtime audiences of the Little Tokyo-based theater company are expecting. For one, there is the sensitive subject matter. But the thing more likely to surprise those in attendance is the onstage nudity.

These bucks to tradition are intentional for the company founded in 1965 and known for producing musicals and plays usually about the Asian-American experience. Call it a theatrical mid-life crisis, or maybe just a way to stand out and reach new crowds, but the company’s 45th season bears the title “Shake It Up.”

The goal, said Tim Dang, the producing artistic director for the company and the director of Mysterious Skin, is to give East West Players a more daring reputation and attract a younger audience while still staying true to its Asian American roots.

“We felt like now is the time for East West Players to start taking some risks,” Dang said last week, while the company was in rehearsals for the play written by Prince Gomolvilas.

“This is very edgy, a very graphic kind of storytelling, but it’s something East West Players could pull off in a myriad of ways,” he continues. “The story is about these two teenage youths in Kansas City who are Caucasian. So with East West Players and our history of nontraditional casting, we’re casting the show all Asian, so that’s something else we’re bringing to the show.”

Based on Mysterious Skin, a novel by Scott Heim (there was also a 2004 movie by Gregg Araki), the show that opens Sept. 15 follows the story of an 18 year old who believes he was once abducted by aliens until he meets up with a childhood classmate, who is now a hustler. He goes on to discover that his friend knows the truth about their childhood trauma.

“I think the audience will be very shaken by this play,” said Gomolvilas. “They’ll question their beliefs about trauma, sexuality, about desire.”

Mysterious Skin is just the beginning for a company that has traditionally trod in safe fare such as last season’s Road to Saigon, about actresses who played the role of Kim in the musical Miss Saigon, and numerous Asian-American-tinged productions of Stephen Sondheim musicals.

The season closes in May with Krunk Fu Battle Battle, a piece set in a high school about a hip-hop dance battle. Dang will also direct that show.

Dang knows this is not what people will expect, but he believes it is where East West Players needs to go.

“We’ve been around 45 years. I think people think we are a very traditional theater,” he said. “We want to show we’re still very relevant and contemporary.”

Dang acknowledges that the sour state of the economy played a role in the decision to go in a more risky direction. He said he was partly inspired by a Kennedy Center program he participated in where he learned that sometimes the best way to survive is to expand.

“We have been in a recession and a lot of our programming involved less risk taking, smaller casts and smaller shows,” he said. “So when you are in these troubled economic times the thing to do is not get smaller and contract and save money, the thing to do is get bigger and be noticed and rise above the rest of the field.”

That led to the decision to lead the season with Mysterious Skin. Dang expects the production and the nudity to have a powerful effect.

“Mysterious Skin is going to shake everyone up on some level, and that’s what we want,” he said.

Gomolvilas, a Thai-American playwright whose previous works include Big Hunk of Burnin’ Love and The Theory of Everything, which both world premiered at EWP, teaches in the Masters of Professional Writing program at USC. While he is well-acquainted with the theater and Dang, he said he was surprised they chose to perform this play.

The subject matter may turn off some of the theater’s regular audience, but the track record of the book and movie could lure a crowd that would otherwise never step inside EWP, he said. He added that those who have read the book or seen the film will get a different take with the play — while the book and the movie reveal the secret of the boy’s past right away, in the stage version the reveal does not occur until the end.

That was appealing to Gomolvilas.

“I though it was more interesting for the play. I think the mystery aspect of the play gives it a stronger plot and structure,” he said.

Scott Keiji Takeda, a recent graduate of Pepperdine University, plays Brian, the teen who believes he was abducted by aliens. In another indication of Dang’s effort to take risks, the play is Takeda’s first professional theater production.

“It’s a very challenging, very deep kind of character that you always hope you can play and it required me to push myself,” Takeda said. “I think it’s definitely going to challenge the audience and push them to a point of being very uncomfortable due to the subject matter. It may not be something all people want to hear, but it’s something very relevant.”

Canadian actor David Huynh, who plays Neil the hustler, said the role is one of the toughest parts he has ever had.

“The reality of the story is the most important thing about the play, the reality of these characters. It’s a story that rings true for a lot of people,” he said. “The first act ends with a bang and it’ll shake people and test the audience’s perspective of theater.”

Without a Car, but with Plenty of Ways to Travel on Broadway

Last month, San Francisco took a bold step forward and officially launched a car-free Market Street. What made it possible is popular transit options such as the Market Street Streetcar, along with a network of buses and bike lanes.