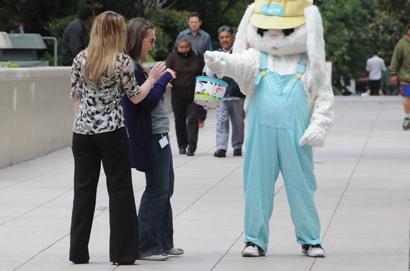 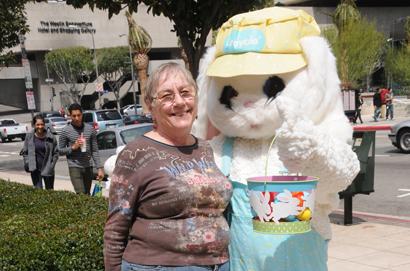 Downtown resident Virginia Elwood-Akers was the only person who asked if she could take her picture with the Easter Bunny. Photo by Gary Leonard.
1 of 2

Downtown resident Virginia Elwood-Akers was the only person who asked if she could take her picture with the Easter Bunny. Photo by Gary Leonard.

DOWNTOWN LOS ANGELES - He’s furry, always happy and carries a big basket of colorful eggs wherever he goes. No, not Councilman Tom LaBonge — he totes around pumpkin bread (he’s not furry either).

I’m talking about the Easter Bunny, and one day last week, he was spotted in the heart of Downtown Los Angeles. And he was me. And I was him.

Allow me to explain.

In the effort to generate a little pre-holiday excitement, and because I thought it’d be funny for a story, I dressed up as the Easter Bunny and strolled down Fifth Street. I was curious to see how much holiday spirit Downtowners have.

I must admit, I was shocked by the response. Most people ignored me, while someone assaulted my tail and I was even the victim of temporary theft. What, haven’t people ever seen a giant rodent with big teeth and bigger ears wandering near the Central Library before?

It all started on a positive note. I exited a car in a full bunny costume that included light blue overalls, a large, heavy and excruciatingly hot bunny head with a yellow cap, and a basket of candy-filled eggs.

Two women smiled right away. “Oooohh, how cute,” one said, her voice rising an octave.

“They’ll all love me,” I thought to myself, imagining that I would be swarmed by people and lines would form just to take a picture with the bunny. Instead, after that initial response, I got a string of smirks. Many people just looked away. I’m not sure if it was in fear, pity or repulsion.

While a photographer asked people if they wanted a free picture with the Easter Bunny, I shook my tail, waved and pointed to my basket full of eggs. No use —Downtowners just don’t seem to have much bunny love.

Finally, I got some affection from Alicia Romo, a banker at Union Bank. She was the first to agree to take a picture and get an egg.

“Sure, why not,” she said, as I put my arm around her for the photo.

This was good, but before we finished, someone walked by and yanked my puffy tail — yes, they goosed a bunny. My visibility was really poor in the outfit, so I couldn’t tell who did it, but a bunch of rough-looking corporate suit types had just passed by. I’m assuming they were anti-bunny.

That wasn’t as bad as another suit-clad man. He walked by, reached into my basket, grabbed an egg and walked away, ignoring our pleas for a picture. He later came back and dropped the egg back in, although I think he took the candy out first.

A few more people begrudgingly agreed to take a picture with the Easter Bunny, though most of Downtown just ignored me. One woman was too busy making what she said was a “big business deal” on her cell phone. Another man just laughed and shook his head, and a couple of young women looked at me the way most women look at me when I’m out of the costume, which is not good.

Then, it got worse. A security guard from MPG Office Trust, which owns the nearby U.S. Bank Tower, followed me around for a while. I guess he wanted to bounce me from the area. He ended up being nice and took an egg from my basket. Still, I couldn’t help thinking that if a grown man can’t wander the streets of the Financial District in a rabbit outfit and give out candy, then the terrorists win.

Fortunately, things ended on a high note. Sort of.

Rachel and Carlos Brizuela were more than happy to take a picture with the Easter Bunny, and seemed excited about it too. Rachel was just as pleased when she found a Tootsie Roll in her egg.

Waiting behind them was 72-year-old Downtown resident Virginia Elwood-Akers. She was the only person to ask if she could take a picture with the bunny.

“It’s not every day you see the Easter Bunny,” she said as she put her arm around me for a picture. She was also happy to get a candy-filled egg.

“I get candy too,” she said. She paused, smiled and then asked me, “Do you like older women?”

I think I blushed through my mask.