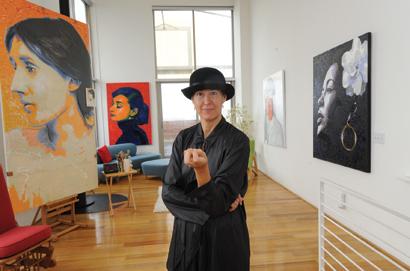 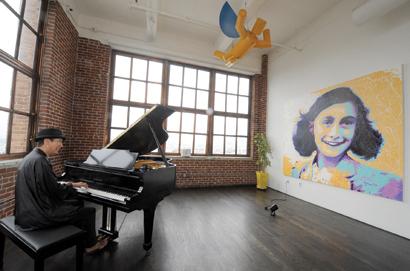 DOWNTOWN LOS ANGELES - Singer/songwriter Michelle Shocked and her boyfriend, artist David Willardson, knew the Biscuit Company loft was for them the moment they saw it. It had long been Willardson’s dream to live in a loft, so Shocked created an environment to suit his vision. Originally the West Coast headquarters for the National Biscuit Company (Nabisco) and constructed in 1925, the building was restored in 2007.

1. “This series is called ‘Indelible Women.’ These are a collaboration between David as a painter and me as a songwriter; I’m writing songs to accompany each of the paintings. I wrote the first song for Audrey [Hepburn] and then I wrote the next song for Amelia [Earhart]. I’m working on Anne Frank and it’s taking me about three months to research each of these women. My inspiration for the Anne Frank song came from the fact that when she was hidden in a secret annex all she could do was look out the window. When the light comes through these steel windows a reflection from inside causes it to look like she’s looking in the windows.”

2. “I go to the West Angeles Church of God in Christ and we had a lot of sermons on the layout of Solomon’s Temple. It occurred to me that the orientation of the space, if you see the design of Solomon’s Temple, is identical to the layout. So my vision was much more of a tabernacle style. My concept with the grand piano is it’s like having an altar of incense because you play music and it goes up as the sweet smelling aroma of praise to God.”

3. “The suspended angel is by Peter Shire. We also have a collection of his ceramics. This sculpture is where we dedicated this space; in Solomon’s Temple it was the Ark of the Covenant.”

4. “In David’s vision of a loft there was always a Rietveld chair. It was in the Mondrian era of the ’20s and that’s a reproduction. Rietveld had that geometric two-dimensional style. It is like a Mondrian painting brought to life.”

Be Patient With Street Vending Enforcement

For the past five decades, street vendors could be found practically everywhere in Los Angeles. Here in Downtown, vendors hawking food or trinkets can be found throughout most of the various neighborhoods, with a particular foothold in places like the Fashion District and the Historic Core.