Downtown Los Angeles has 15 unique districts. They are all part of one vibrant community, but each has unique elements.

At a Glance: The Arts District has emerged as the epicenter of all things cool, and is Downtown’s most buzzed-about neighborhood. With lauded restaurants, a collection of micro-breweries, a growing residential base, a micro-amusement park and, of course, loads of art spaces, this sometimes gritty and always colorful enclave is in the throes of a serious transformation.

Local Color: Keep an eye out for vibrant murals, creative shops in unlikely locales, a cutting-edge architectural school, a design museum, and lots of new loft buildings. A highlight addition is Two-Bit Circus, with its virtual reality and handheld games. And you can’t go wrong with the galleries around the area.

At a Glance: This neighborhood is a hub for office towers, but it’s more than a place for worker bees — it also boasts some of L.A.’s best cultural institutions. Just consider The Broad museum, a repository of some 2,000 pieces of contemporary art. It’s part of a cultural corridor along Grand Avenue that includes the Walt Disney Concert Hall, Music Center, MOCA and the Colburn School.

Local Color: Be sure to stroll through Grand Park, a 12-acre attraction stretching from the Music Center to City Hall. Watch for movie nights, festivals, concerts, free dance events and big community block parties. Don’t miss a trip on Angels Flight, the funicular that runs from Bunker Hill down to Grand Central Market.

Insider Tips: Culture can be costly, so check out Hot Tix for discounted shows at the Music Center (about $25). Grand Park also offers a number of free events, and a super-fun splash fountain. Additionally, lines for The Broad are shortest after 5 p.m. on Thursday.

At a Glance: Central City East consists of two sub-districts: the Industrial and Toy districts. This 44-block expanse is a melting pot of activity: trucks rumble in and out of seafood, produce and cold storage warehouses; gritty streets give way to pockets of lofts and restaurants; and wholesale and retail shops sell a hodgepodge of discounted goods.

Local Color: Hundreds of shops are crammed with cheap silk flowers, perfume, housewares, luggage, toys, water pipes and much more. It’s energetic and a bit rough around the edges, but the lure of a good bargain is strong.

Insider Tips: Los Angeles Street is place to go if you want to shop. And you can find toys in the Toy District for a fraction of what they cost in the mall. But beware of counterfeit items — if the deal seems too good to be true, it probably is.

At a Glance: Chinatown is a blend of trendy and traditional. Art galleries and cultural festivals draw families and hipsters; designer boutiques share real estate with Chinese gift shops; and these days, old-school restaurants share the spotlight with a new crop of buzzy eateries. In fact, the district is emerging as a foodie mecca, with everything from Nashville hot chicken to artisanal ice cream.

Local Color: There’s a magical quality here that you can’t find anywhere else in the city — there are paper lanterns overhead, smoked ducks hanging in windows and quaint shops filled with tourist trinkets.

Insider Tips: Be sure to visit Far East Plaza, which houses a collection of exciting new restaurants. Or visit any of the traditional restaurants for an authentic meal. On the northern edge of the community is the beautiful and Los Angeles State Historic Park. Keep going east and you’ll find celebrity chef David Chang’s restaurant Majordomo.

At a Glance: Separated from Downtown proper by the 110 Freeway, City West has seen a number of high-end and high-rise residential projects. Wilshire is a hub of activity, and the area is also seeing some nightspots, particularly on Seventh Street. Housing projects are also rising here.

Local Color: Major tenants include the 20-acre Los Angeles Center Studios (they shot “Mad Men” there) and the Vista Hermosa Natural Park, a lovely and bucolic space with walking trails and a sweeping view of Downtown.

Insider Tips: If you’re looking for a top-notch burger, stop by Plan Check on Wilshire Boulevard. If you want to catch an indie rock band, head to the Teragram Ballroom on Seventh Street. That street also holds the boutique Mayfair Hotel.

At a Glance: Home to a concentration of public agencies employing more than 93,000 people, the Civic Center bustles during the week with city, county, state and federal workers. The iconic City Hall is here, as are the LAPD and Caltrans headquarters. A cube-shaped federal courthouse draws attention on First Street.

Insider Tips: For a spectacular view, check out the City Hall Observation Deck with 360-degree vistas of the city. It’s open weekdays, and it’s free. While you’re there peruse the portraits of all of L.A.’s past mayors. Walk by Times Mirror Square but note that the L.A. Times moved to El Segundo in 2018.

At a Glance: Tens of thousands of tourists and commuters each day visit El Pueblo de Los Angeles Historical Monument and pass through the adjacent Union Station (the Mission-style terminus is the regional transit hub for the subway, rail and bus networks). This is the city’s birthplace, and history is everywhere you look.

At a Glance: Spread across 100 blocks, the Fashion District is the hub of the West Coast apparel industry, with more than 1,000 stores. The California Market Center and Cooper Building are two of its main wholesale destinations. Some new restaurants and residential buildings are arriving.

Local Color: The most popular destination is the bazaar-like Santee Alley, with more than 150 vendors selling bargain-priced fashions and accessories.

Insider Tips: A sub-district known as the Flower District is made up of two major marts that supply the region’s floral industry (the public can gain entry for a few dollars). Also, if you head to Santee Alley, be prepared to bargain. If you need a cocktail, try the Pattern Bar. If you need coffee, No Ghost Bears is worth checking out.

At a Glance: The corridor that runs from Staples Center to Exposition Park just received a $20 million makeover. It still is a main thoroughfare for cars, but now there are protected lanes for bicyclists, as well as new landscaping, lighting and signage. It’s a major step in strengthening the connection between Downtown and the University of Southern California.

Local Color: USC is the district’s biggest and best-known resident, with some 43,000 undergrad and graduate students. The area continues to expand with new housing, restaurants and shops, including the mammoth USC Village (it has a Trader Joe’s!).

At a Glance: There are almost too many highlights in this bustling neighborhood to keep up with: New housing complexes have arrived in recent years, as has a Whole Foods grocery store at Seventh Street and Grand Avenue. The renovated Bloc shopping mall has reinvigorated the retail scene, including its recently opened Alamo Drafthouse theater complex. The standout in the district is the 73-story Wilshire Grand Center; it houses a 889-room hotel, office and retail space in the tallest building in the West.

Local Color: No longer just a nine-to-five enclave, the district is alive late into the evening with revelers out to enjoy the pubs, sleek restaurants and lounges.

Insider Tips: Crane your head skyward to catch a glimpse of 71Above, a fine-dining restaurant that crowns the iconic U.S. Bank Tower; that edifice also has a “skyslide” high up on the exterior of the building for visitors to use. The Wilshire Grand offers eating and drinking options on its top floors. For something closer to the ground, visit the gorgeous Central Library on Fifth Street.

At a Glance: The historic Broadway thoroughfare continues its comeback, with vintage neon lighting the night, fashion boutiques luring shoppers and restaurants activating the street. The Historic Core continues to power forward with hotel, housing and other projects coming. An Apple Store is being built out in the old Tower Theatre.

Local Color: An impressive collection of pre-1930s landmarks includes the gorgeous Bradbury Building, Grand Central Market (which has a huge collection of artisan food stalls), and the historic Broadway Theater District — the largest of its kind in the nation. There are also, surprisingly, a string of sneaker stores, including a new Jordan brand shop at 620 S. Broadway.

Insider Tips: Check out Angels Flight, the funicular that connects the community to Bunker Hill.

At a Glance: Many of the Jewelry District’s underutilized historic buildings are getting new life in the form of creative office space, housing, shops and restaurants. Still, the area remains the center of the local jewelry and gem industry, with literally thousands of wholesale and retail jewelers, suppliers, manufacturers and more spread throughout 12 blocks.

Insider Tips: When buying jewelry, one rule stands out above all others: bargain! Come lunchtime, visitors often head to a tiny alley next to St. Vincent’s, which offers a charming European-like setting with a handful of cafes and eateries. 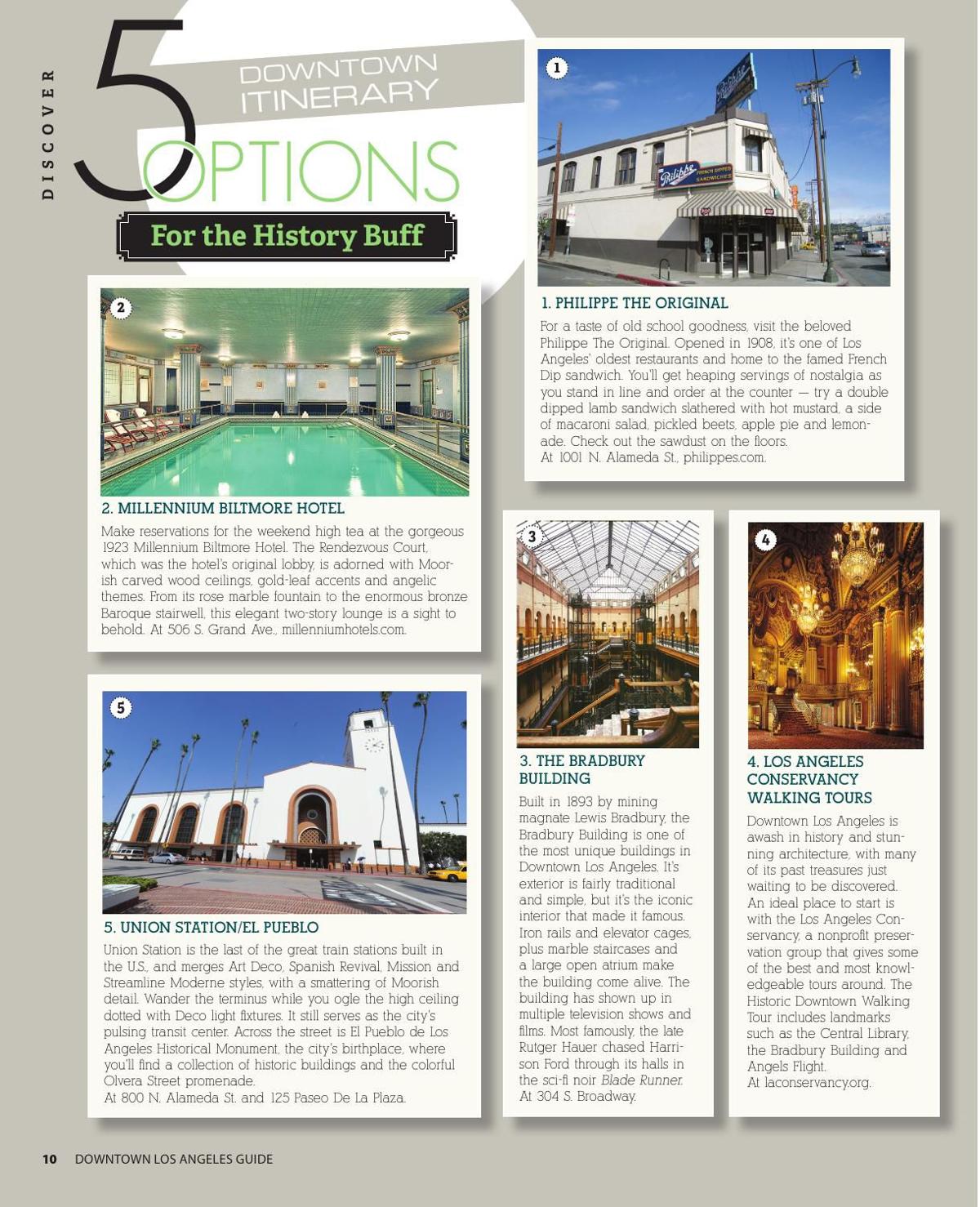 Local Color: Little Tokyo is one of Downtown’s most popular walking districts thanks to a concentration of sushi restaurants, ramen houses, bars and shops. The open-air Japanese Village Plaza is one of the busiest shopping hubs, with everything from mochi ice cream to a Hello Kitty shop, while the Little Tokyo Galleria features a Daiso Japan store and the X Lanes bowling alley.

Insider Tips: Known as the “garden of the clear stream,” the James Irvine Japanese Garden is a hidden gem inside the JACCC complete with babbling stream, cascading waterfall, fish and ducks.

At a Glance: The OBD can feel like a small town in the heart of an urban center. Everyone knows each other, neighbors wave, families stroll with kids, dog walkers are everywhere and sidewalk eateries abound. The sense of community here is strong, which makes sense considering it was the first neighborhood to emerge in the modern loft boom.

Insider Tips: The monthly Art Walk (the second Thursday of each month) is one of the biggest Downtown draws, as galleries, restaurants and shops open their doors. If you need a used book for cheap, head to the mammoth and Instagram friendly Last Bookstore. There also may be more cafes here than people.

At a Glance: This district is home to L.A. Live, Staples Center, the Convention Center and a large number of bars and restaurants. A handful of mega-projects are adding even more energy, and thousands of residents, to the neighborhood.

Local Color: Visitors flock here to attend concerts and events at the Microsoft Theater, the Conga Room and The Novo, dine at the growing list of restaurants or catch a movie at the cineplex.

Insider Tips: Regal Cinemas at L.A. Live has 14 screens. Also, check out the Grammy Museum, which honors all things musical. There’s even a small dog park at L.A. Live. 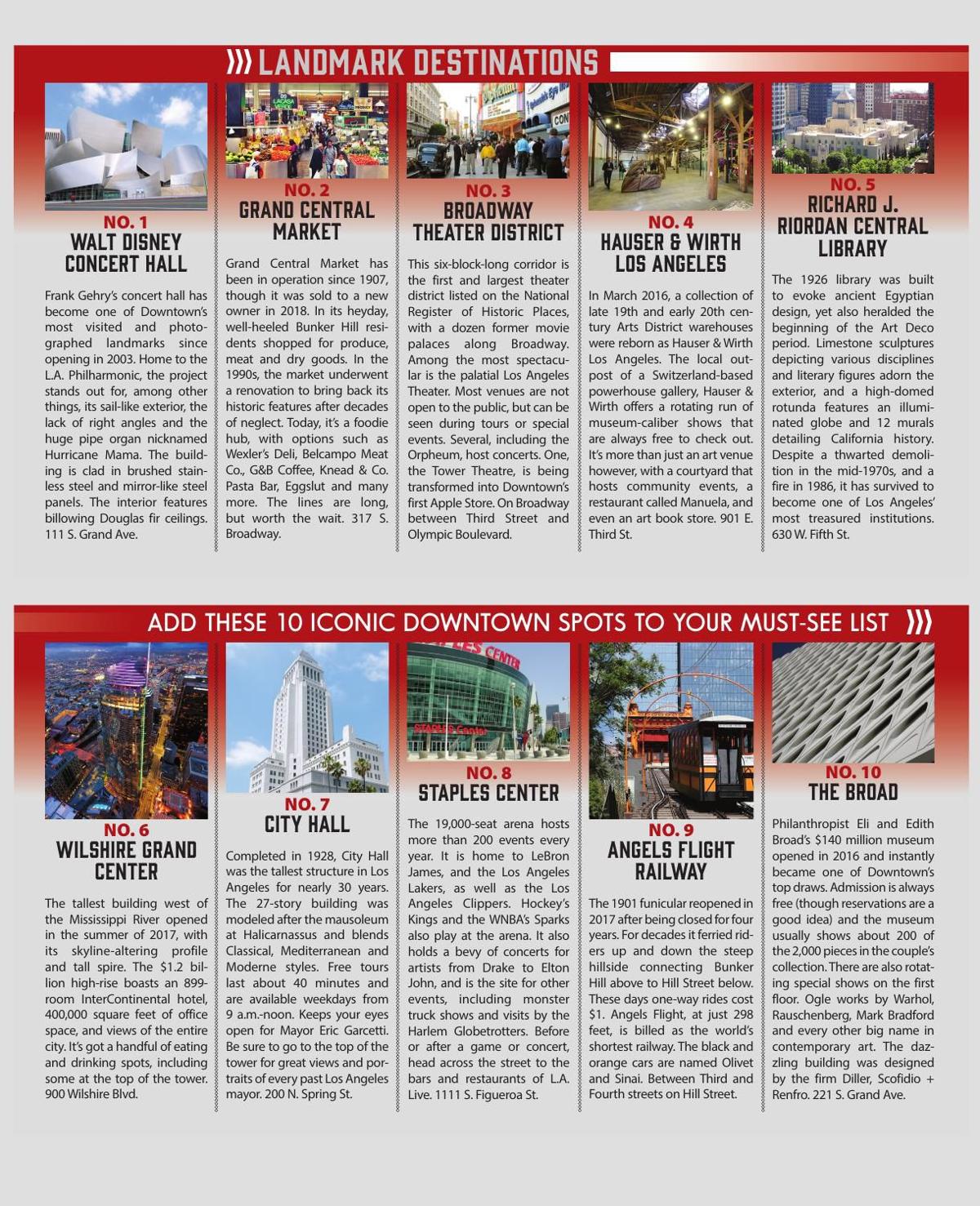