While Downtown Los Angeles contains more than its share of steel and concrete, it also has a growing collection of community-beckoning green spaces and open-air venues. L.A. State Historic Park offers 32 acres of recreational space. There are numerous community events and kids splashing in the dancing fountain at Grand Park. The city gathers at Pershing Square for summer concerts and movie nights. The vibrant El Pueblo beckons with mariachi music and revelry. These are some of the many outdoor options that will get your heart pumping.

This tucked-away monument honors the life of former slave Biddy Mason, who walked behind her master’s wagon train from Mississippi to California in 1851, and petitioned the court to declare her a free citizen. She later became a prominent L.A. landowner. Her astonishing story is commemorated on plaques in the courtyard, which is full of camphor, jacaranda trees and public art. 333 S. Spring St. (between Broadway and Spring, Third and Fourth streets).

Though the eye-catching Bunker Hill contemporary art museum garners most of the attention, don’t overlook the lovely 24,000-square-foot public plaza south of the venue. Visitors will appreciate the 100-year-old grove of Barouni olive trees, a lawn, seating and other inviting landscaping along Grand Avenue. 221 S. Grand Ave., thebroad.org.

California Plaza might be removing its longstanding water features but thanks to the open green space, shaded tables and relaxed hum of activity, it is still an ideal place to take a load off and grab a bite to eat. There are cafes and restaurants lining the plaza, and summer evenings and weekends bring a fantastic lineup of free concerts and performances. 300-350 S. Grand Ave., grandperformances.org.

The olive tree garden at the Cathedral of Our Lady of the Angels delights with whimsical animal sculptures designed by a children’s book author. Based on Bible stories, the expressive pieces include a camel, bear, turtle, lion, fish and even a giant beehive cave for exploring. Grab lunch from the cathedral cafeteria and eat it on the patio overlooking the garden. The main plaza also holds water features that are apt to spark curious minds. 555 W. Temple St., olacathedral.org.

Enjoy this Downtown neighbor just a few minutes away. Families, joggers and loungers gather here to ogle the lake’s lotus flowers in bloom, ride the pedal boats, feed ducks and stroll the walking path. The boathouse features an eatery where you can get all-day breakfast and sip refreshing drinks. Keep an eye out for the community festivals that take place here. 751 Echo Park Ave., laparks.org.

Called the “birthplace of Los Angeles,” El Pueblo’s nearly 30 historic buildings (most of which are open to the public) are clustered around a bustling open-air plaza. The colorful plaza often hosts music, dancing, public speakers and lively mariachis, while the shops of Olvera Street bustle just a few steps away. 125 Paseo de la Plaza, elpueblo.lacity.org.

This oasis spans 7.5 acres and boasts more than 20,000 rose bushes representing 190-plus varieties. There are always wedding parties and families frolicking among the gazebos, statues and fountain. The grounds surrounding the garden are full of expansive lawns that also host picnics and pick-up soccer games. Don’t miss the annual Blooming of the Roses Festival in April and be careful of visiting when games take place in the Coliseum. Open daily 8:30 a.m.-sunset. Closed Jan.1-March 15 for pruning. 701 State Dr., laparks.org.

Located next to the Fashion Institute of Design & Merchandising, this fun little park offers a playground, fountain, benches and a lawn dotted with whimsical coyote statues. A colorful mosaic clock tower stands at the entrance. There’s also a playground, making it a very popular spot for South Park families. 919 S. Grand Ave.

Spanning 12 acres and stretching from the Music Center to City Hall, this urban park is where Downtown gathers. It hosts a wealth of events including civic functions, concerts, picnics, farmers markets, movie nights and extravaganzas on New Year’s Eve and the Fourth of July. It is a lavender-scented expanse of grassy lawns and performance spaces, with seating areas amid mini-gardens studded with cacti. There is also a fountain with lights and jets of dancing water that kids love to splash in, plus a fenced-in are for the dogs. Open daily until 10 p.m. 201 N. Grand Ave., grandparkla.org.

This kid-beckoning playground is on the eastern side of Grand Park, across from City Hall. The whimsical pink space features a canopy of sycamore trees, a 20-foot-tall tree house with two slides, a tunnel, ropes and rocks to climb, and a two-foot “mountain” for the little ones. Open daily 5:30 a.m.-10 p.m. 200 N. Grand Ave., grandparkla.org.

This 32-acre park underwent a $20 million renovation and opened in the spring of 2017. Nestled on the shoulder of Chinatown, the park was once home to Tongva villages and the Zanja Madre, or “Mother Ditch,” a key part of L.A.’s early water system. The former rail yard now features wildflowers, native plants, winding dirt trails for walking or jogging, and picnic areas. The upgrade has delivered a scenic pedestrian bridge, welcome center, amphitheater and restrooms. It is also the sight of occasional concerts and festivals. Open daily 8 a.m.-sunset. 1245 N. Spring St., parks.ca.gov.

This 2.3-acre park unfolds by the Flower Street entrance of the Richard J. Riordan Central Library. There are seven fountains, as well as shady jacaranda and olive trees. Sculptures are placed throughout the garden, and the Grotto Fountain is a tribute to civil liberties, etched with quotes from Frederick Douglass and the Fourteenth Amendment. Southeast corner of Fifth and Flower streets.

This 53-year-old plaza between the Mark Taper Forum and the Dorothy Chandler Pavilion recently underwent a 20-month renovation, further integrating the space with the rest of Grand Avenue. Highlighted by a floor-level water feature, the space offers sweeping views of City Hall and Grand Park on one end, and the Los Angeles Department of Water and Power’s Ferraro Building on Hope Street. There is also a list of free and low-cost programming that utilize the plaza space and three culinary options — a wine bar, cafe and full-service restaurant — on the grounds as well. 135 N. Grand Ave., musiccenter.org.

Dedicated in 1866, this five-acre park started out as a Spanish plaza called La Plaza Abaja. Now named after World War One General John J. Pershing, it has evolved dramatically over the decades and features a 10-story purple bell tower, bright yellow walls, a faux earthquake fault line and a Beethoven bust. There’s a bustling farmers market on Wednesday; summer concerts and movies from July through August; an ice-skating rink from November to January; and other occasional festivals. Keep your eye out for news of a major renovation in the future. 532 S. Olive St., laparks.org/pershingsquare.

A pair of playgrounds marks the southern end of this park, with one for kids ages 2-5 and the other for the 5-12 set. There are bridges, slides, a climbing structure and a balancing apparatus. Open daily 9 a.m.-5:30 p.m. 532 S. Olive St., laparks.org/pershingsquare.

A 13,000-square-foot open space at the base of the Aven apartment complex, South Park Commons offers a place to grab a moment of calm in the bustling South Park neighborhood. Simple in scope, with a concrete path flanked by both potted and free standing trees and flowers, the space features plenty of wood-paneled chairs and tables to kick back in an enjoy the shade. 1120 S. Grand Ave. 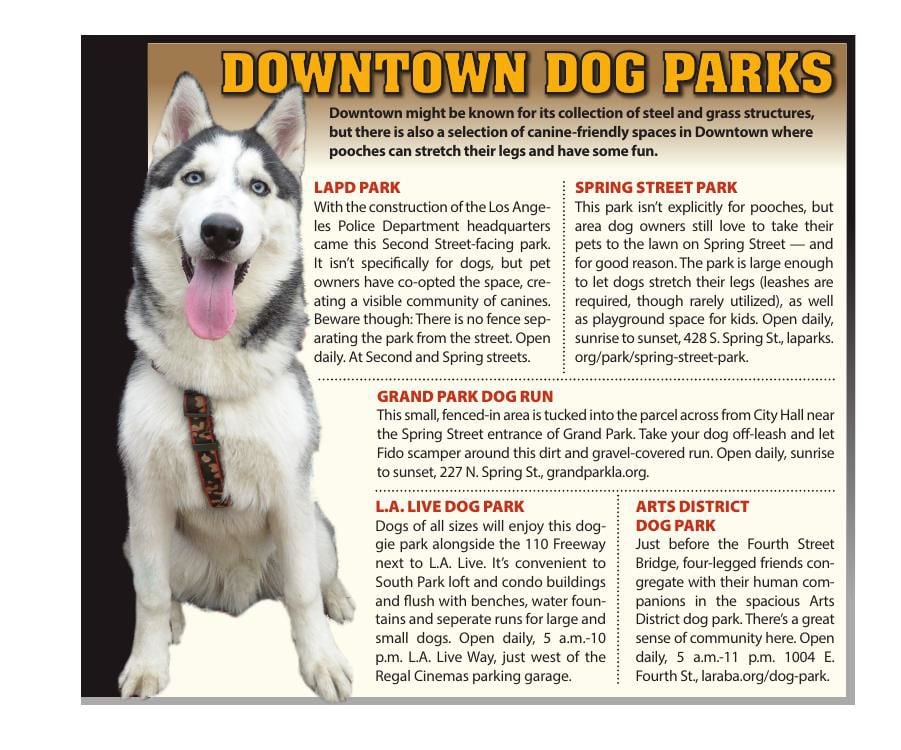 The 56,000-seat stadium has welcomed baseball fans since 1962. After scouting a spot at Chavez Ravine just north of Downtown, Brooklyn Dodgers owner Walter O’Malley moved his team to the West Coast, later moving into Dodger Stadium. The venue is noted for its 300 acres of tree-filled landscaping, a cantilevered design that eliminates view-blocking columns and its old-time ballpark feel. Don’t miss the 90-minute, behind-the-scenes tour. A free shuttle for ticket holders departs from Union Station. 1000 Elysian Park Ave., dodgers.com.

This South Park entertainment and sports hub is a lively collection of hotels, restaurants, concerts, sporting events and festivals. It’s home to Staples Center, the Novo, the Microsoft Theater and the Grammy Museum. The Kings, Lakers, Sparks and Clippers all play here. It also hosts several celebrations and seasonal events on its plaza, including a winter ice rink. 800 W. Olympic Blvd., lalive.com.

Anchoring Exposition Park and its collection of museums and green space is the L.A. Memorial Coliseum, which opened in 1923. It saw action during the 1932 and 1984 Summer Olympics, the World Series in 1959, and Super Bowls I and VII. The Coliseum is home to the USC Trojans football team and the L.A. Rams (until a permanent stadium in Inglewood opens for the 2020 season). It will also be used for the 2028 Summer Olympics. 3911 S. Figueroa St., lacoliseum.com.

The latest addition to the list of Downtown sports venues, Banc of California Stadium opened in 2018 and sits near the Los Angeles Memorial Coliseum in Exposition Park. The stadium sits 22,000 people and houses Major League Soccer’s Los Angeles Football Club. The venue will also play a role when Los Angeles hosts the 2028 Olympic. At 3939 S. Figueroa St., bancofcaliforniastadium.com. 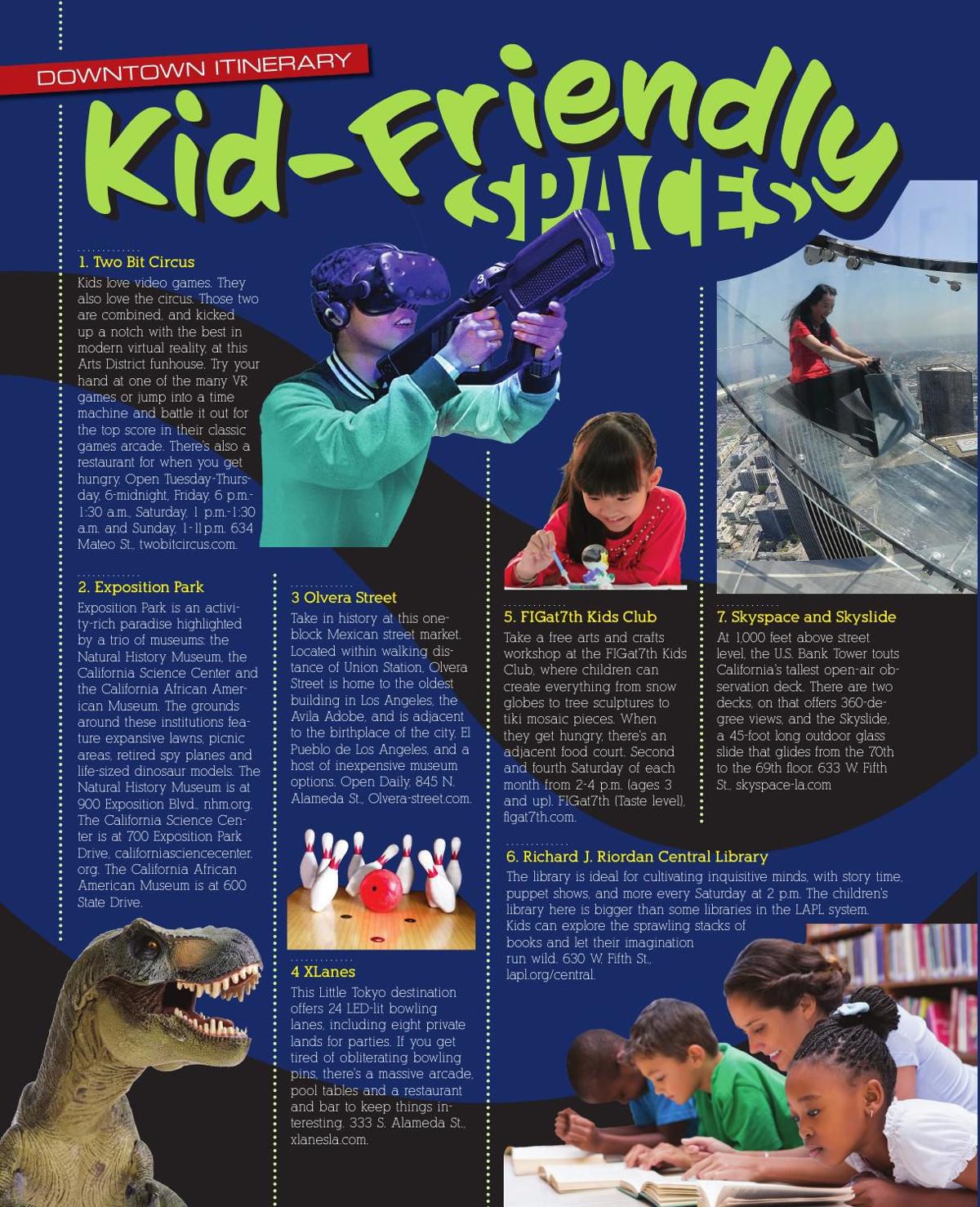 You can trust that the architectural historian and guidebook author who guides these tours knows her way around the city’s most interesting landmarks. Choose from two- and three-hour driving tours (via deluxe van) of more than 70 Downtown sites including historic buildings that played a part in the formation of the city, vintage hotels, elegant department stores, wholesale districts, civic gems, Little Tokyo, Chinatown and modern marvels such as Frank Gehry’s Walt Disney Concert Hall. Tours are $75 per person and typically last two to three hours. At architecturetoursla.com.

Explore the Central City while learning about the neighborhood’s historic buildings, speakeasies and artist hubs. Based in the Arts District, this tour company also offers custom excursions for those looking for something more personalized. Tours start at $25 per person. 688 S. Sante Fe Ave., cartwheeelart.com.

This shop rents a fun assortment of bikes, including city and road bikes, cruisers, trikes, recumbents, tandems, electric scooters and even seats/trailers for the kids. They have everything needed for a tour of the Central City, including helmets, locks and lights. Full day rentals are $35-$120. 425 S. Broadway, dtlabikes.com.

This tour covers all of the Central City’s highlights including landmarks along Seventh Street, on Bunker Hill and in the Historic Core. The tours cover a range of topics, from Downtown landmarks, to murder mystery. Each tour is about two hours and begins at $30 per person. At thereallosangelestour.com.

A fun and healthy way to navigate Downtown is by bicycle. They’ve got road bikes, fixies, tandems and hybrids, plus helmets and locks for rent. Prices are $35-$90 for the day. 1626 S. Hill St., justridela.com.

They offer guided day and late-night tours of new and historic Downtown. Ride and learn about the history, architecture and culture of the area. Tickets include a 21-speed hybrid bike, helmet, safety vest, water and guide. The tour is about three hours, covers up to 12 miles and costs $65. At lacycletours.com.

When it comes to the history and architecture of the city, there’s no more important organization than the Los Angeles Conservancy. Not only does it advocate for the preservation of architecturally and culturally significant buildings, it also has a whip-smart cadre of docents. For more than two decades they have led fascinating walking tours of the historic Broadway Theater District, Art Deco palaces, civic gems, high-rises and the Historic Core. Most of the two-and-a-half-hour excursions depart at 10 a.m. Reservations are required, as the tours often sell out. Tickets are $15 for the general public, $10 for members and children under 17. At laconservancy.org.

Take a two-wheeled journey into Los Angeles’ forgotten eras. Bike tours start at various locations and often include beer. This band of urban adventurers seeks out the secret places, treasures, stories and legends of the city. Tickets are $10. At laexplorersclub.com.

This company offers all the benefits of a walking tour without actually having to walk. Participants see the sights via Segway. These two- to three-hour excursions can cover nine miles and 60 blocks, with riders zipping by local landmarks, major hotels and shopping plazas. Tours start at $59 and generally meet at 11 a.m. At segwow.com.