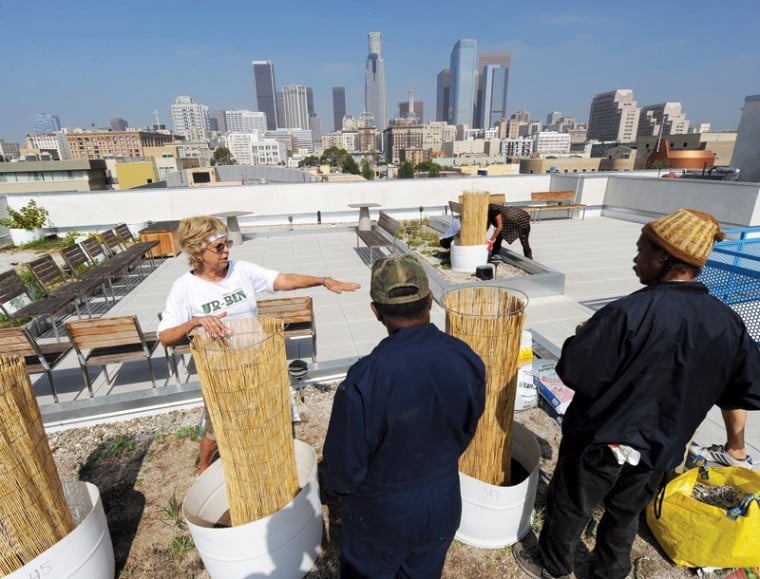 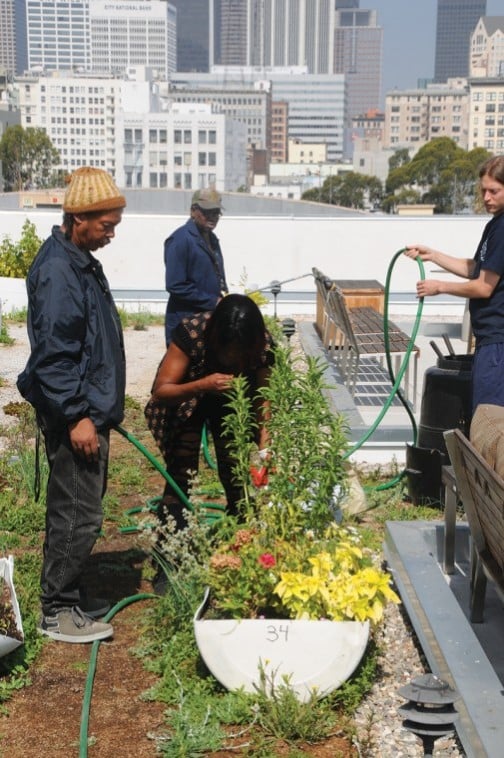 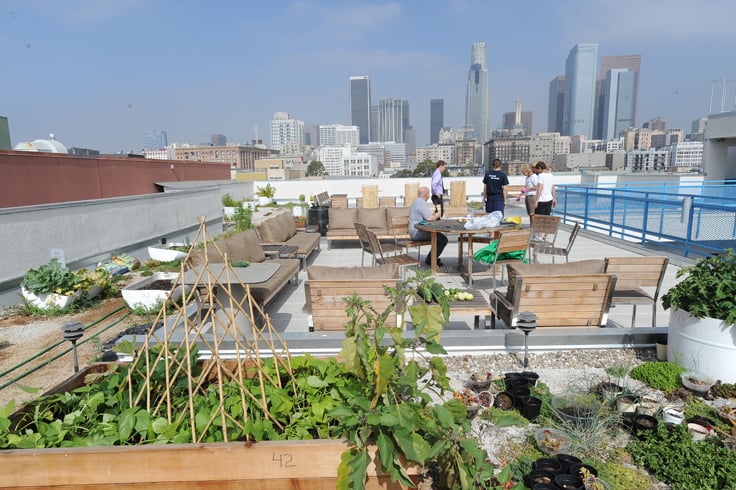 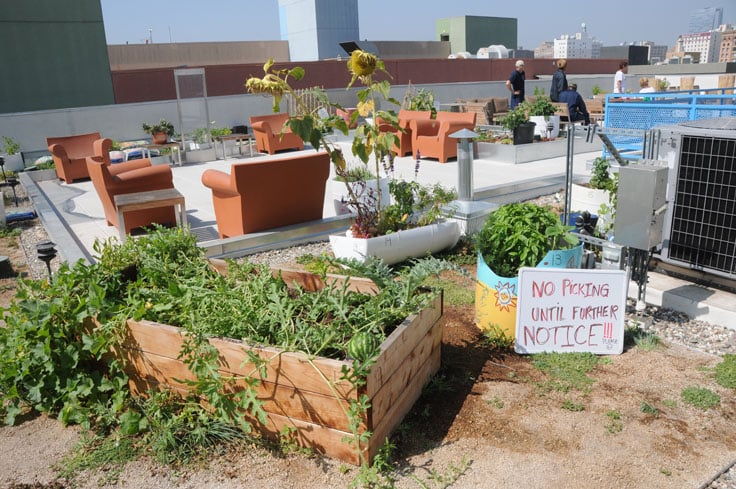 DOWNTOWN LOS ANGELES - On a recent Wednesday, Willie Mae Bell was dripping with sweat under a harsh mid-morning sun. She was on the roof of her building, preparing to plant potatoes in a garden.

The formerly homeless Bell did so under the tutelage of Jayne Torres, a South Park resident and small business owner with a passion for gardening. The two worked together to place the spuds amid a surrounding bounty of watermelons, squash, tomatoes and a potpourri of rosemary, sage and lavender.

The aromatic oasis was all the sweeter considering its location on a rooftop in the heart of Skid Row, five stories over streets known for harsh odors.

Bell resides at the Charles Cobb Apartments, a permanent supportive housing complex at 521 S. San Pedro St. run by Skid Row Housing Trust. The nonprofit developer designed the building's expansive roof to support gardens in containers, but when the 76-unit project opened in April 2010, there wasn't much of a plan for planting.

Enter Torres, Kris Hopfenbeck and Ryan Rogers, Downtown residents who had been on a quest for a local space to turn into a community garden.

"When I moved Downtown five years ago, it started gnawing on me that I didn't have a place to go to get my hands dirty," said Torres, who owns a small apparel company.

Then the trio found the Charles Cobb. Working with representatives of the Downtown Los Angeles Neighborhood Council, they soon launched their garden network, naming it Ur-bin. The group functions as a subcommittee of DLANC, which supported the effort with $2,000 in seed money.

"Gardening is a missing component of urban life," Torres said. "We realized early on that we weren't going to find a big piece of dirt. That's how we came up with the name Ur-bin."

Officials with SRHT always imagined that the roof of its $13 million project would one day have some kind of garden. What they couldn't predict was that it would blossom into a community meeting place, where Cobb residents would team with loft dwellers to plant and tend an impressive spread of edibles.

Ur-bin members meet with Cobb residents every Wednesday morning to work on the garden. They plant, weed, trim and harvest. Torres, Hopfenbeck and Roger have arranged major donations of materials, including plants and soil, from nurseries as far away as Carpinteria. That also means field trips, in which Ur-bin volunteers and Cobb residents pile into cars and head to garden supply shops and nurseries.

"The residents pick out the plants," Torres said. "It's really their work."

Torres was quick to point out that the endeavor is, at least somewhat, selfish. She and the other Ur-bin members started the group not as community do-gooders, but so they could satisfy their shared hobby.

In the eyes of SRHT director of external affairs Molly Rysman, the garden's real fruit is that it allows two Downtown communities that are usually kept separate to interact regularly.

"It's hard to approach people from different backgrounds," Rysman said. "It's hard for our residents. This connects people from two worlds through their passion."

That passion is obvious in Cobb resident Raymond Lyons. The regular member of the garden club is also an avid pickler, so he pays special attention to the garden's cucumbers.

"The pleasure about gardening is, if you know you planted it you get to watch it grow and see what you accomplished," Lyons said. "We'll be having dinner and someone will be like, ‘Oh that's good; where'd you get that?' Well, we got it out the backyard."

Though not really a backyard, the rooftop feels like one. There's a mixture of pots and raised beds, some fashioned from plastic 50-gallon oil drums, and an array of outdoor furniture for lounging. The skyline to the west and the intermittent sirens from the streets are the only reminders that it's on a roof in Skid Row.

Torres believes this is one of the few places a community garden could even exist Downtown. From the Cobb, she can see the rooftops of dozens of Historic Core loft buildings. Some could support a garden, but what landlord would open it up to a community beyond the inhabitants of that structure, she asked?

At the Cobb, Rysman said, the wider community is exactly what they're after.

For more information on Ur-bin, follow the organizers on Twitter at @Ur-bin. To get involved, email Jayne@leftcoastclothing.com.

UPDATE: This story was updated to reflect that Ur-bin is a subcommittee of the Downtown Los Angeles Neighborhood Council.