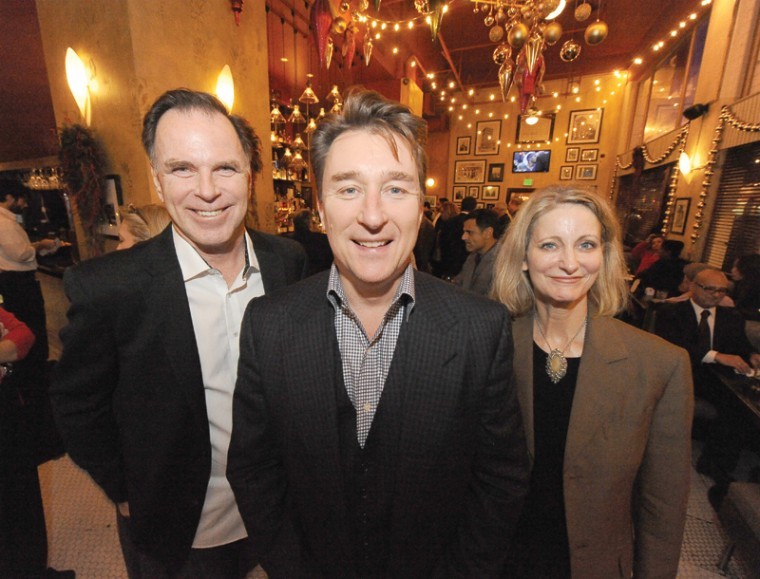 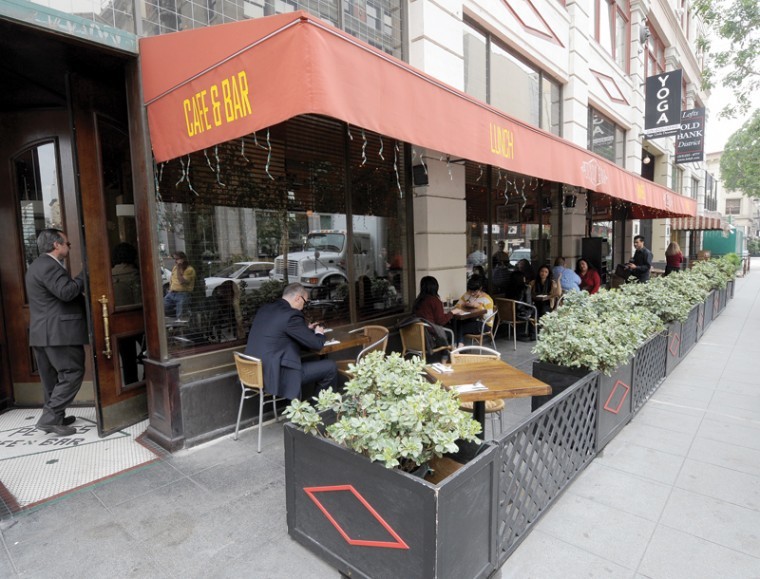 The Pete’s patio emerged as a crucial element, with outside diners helping activate the street.

The Pete’s patio emerged as a crucial element, with outside diners helping activate the street.

DOWNTOWN LOS ANGELES - Like every restaurant, Pete’s Café and Bar faced numerous challenges when it opened.

There were the costs of construction and remodeling a space in a turn-of-the-century building. There was the difficulty of navigating through an often-Byzantine city permitting process. There was the hunt for money to pay for the project. Then there was the challenge of finding a customer base and keeping them coming back.

Pete’s had another challenge that made the already tall task of surviving even more difficult: It was a culinary pioneer in a neighborhood on the edge of Skid Row.

Pete’s didn’t serve a revolutionary cuisine or reinvent the restaurant business model in any way when it opened on Nov. 18, 2002. Instead, it was a mid-priced joint wooing a lunch and dinner crowd by serving foods such as mac and cheese, burgers, sandwiches, salads and drinks. However, it was the first new restaurant aimed at the nascent Downtown residential population.

“We were pioneers and they were the pioneers,” said co-owner Peter McLaughlin of the early customers. “They were just eager to have a full service restaurant in that area.”

To say it’s been a long, strange trip is an understatement. Although McLaughlin is the namesake of the establishment, he had almost no restaurant experience before Pete’s. He was a partner in the project with Old Bank District developer Tom Gilmore and Jerri Perrone, a principal at Gilmore Associates. McLaughlin and Perrone married in 2000.

What is perhaps even more unusual than the opening is that Pete’s today is the grande dame of nouveau Downtown dining. After years of ups and downs and numerous kitchen comings and goings, it’s the anchor of the Old Bank District’s restaurant scene. It has been celebrating its 10th anniversary over the past month, with a neighborhood party on Nov. 12 and an invitation-only affair last week.

Although restaurant veterans routinely proclaim that it takes a passion for food to make a place survive, Gilmore today admits that he had other concerns.

“The truth of the matter is that the only reason we opened Pete’s was because, at that time, this neighborhood was such a lousy neighborhood that no one would open a restaurant,” Gilmore said. “We knew that if we were going to create a sense of community, we had to have a restaurant.”

Before there was Pete’s, there was Gilmore, and though she was often out of the spotlight, there was Perrone. Gilmore, a New York architect who had come to Downtown Los Angeles in the mid-1990s and worked for property owner Judah Hertz, unveiled his $33 million plan to create the Old Bank District in 1998. Benefitting from the Adaptive Reuse Ordinance, which made it easier and cheaper to turn old office buildings into housing, he persuaded Perrone to leave the East Coast and work with him. In 2000, his first apartment complex, the San Fernando Building, opened. The Hellman and Continental buildings followed the next year.

Gilmore and Perrone teamed up with McLaughlin, a former public relations and communications director, to open Pete’s. His only restaurant experiences, he recalled recently, were two early 1970s stints working as a dishwasher and a busboy. One lasted a day, the other two weeks.

“I think it’s appropriate that someone who didn’t know what the hell they were doing would be the first to open the first full service restaurant on Main Street,” McLaughlin said.

With the original white tile floors salvaged and polished, dark wood chairs and tables, along with high ceilings and large windows facing Main and Fourth streets, Pete’s has the feel of an upscale old-time diner. Food highlights at the 4,200-square-foot, 154-seat restaurant include the Hellman Burger, the bread pudding and the blue cheese fries, which manages to be both intensely popular and a virtual heart attack on a plate.

The restaurant’s lively bar and dog-friendly patio have also helped create a sense of community in the area. The bar remains fairly busy until last call just about every night of the week. The bartenders make a habit of knowing most of the locals and what they drink.

With its popularity, these days it’s easy to forget what conditions were like a decade ago. One block south of Pete’s, the corner of Fifth and Main streets was a veritable drug bazaar.

Now, some spots with citywide and even national appeal thrive. Bäco Mercat and Blossom are just steps from Pete’s.

While a number of restaurants have been in Downtown longer than Pete’s, among them higher-end places such as Water Grill, Traxx at Union Station and the Pacific Dining Car, Pete’s was aimed directly at the new Downtowners with the goal of creating a neighborhood.

“Pete’s was definitely a catalyst,” said Hal Bastian, a former leasing agent for the Old Bank District who today works as senior vice president and director of economic development for the Downtown Center Business Improvement District.

One key accomplishment for Pete’s, Bastian said, was that it brought people out of their lofts and helped neighbors meet each other. In that regard, two particularly important elements were things people take for granted today: the patio and the fact that the restaurant originally stayed open until 2 a.m. on Friday and Saturday.

“It was a critically important thing for the community to activate the ground floor, to keep it alive and open until 2 a.m.,” Bastian said. “The outdoor dining cannot be [appreciated enough]. It created life on the street. It created community. People would see their neighbors at Pete’s.”

As late as the 1940s, the space on the ground floor of the San Fernando Building, on the southeast corner of Fourth and Main streets, housed a cigar shop, a pharmacy and several other businesses including a small restaurant. Then, as Los Angeles continued to sprawl, the property, like many of its neighbors, fell into disrepair. By the late ’90s it and many other nearly century-old buildings stood empty.

By 2002 the Historic Core had a few housing complexes. In addition to Gilmore’s project, Izek Shomof had opened two buildings on Spring Street. Several other plans were in the works and developers were eyeing every opportunity.

Still, there were relatively few places to get a sit-down meal, especially after dark.

“The no-competition could have been a good thing or a bad thing,” recalled McLaughlin. “It was good because it’s undiscovered territory, but it was bad because the smart restaurateur would never dare open in that area.”

Construction on Pete’s took a little more than a year and cost about $1.2 million. That included a $150,000 loan from the Department of Water and Power, which McLaughlin said was finally paid off this year.

McLaughlin said he remembers people peeking into the window as work on the restaurant proceeded. Some, not believing anyone would open a restaurant in the area, asked if it was a movie set.

Even Old Bank District residents like Chris Kohlhof, who moved into the complex before Pete’s opened, found it hard to believe that someone was creating a restaurant in their neighborhood.

“It was a ghost town at the time,” recalls Kohlhof, who said he remembers seeing a rendering for the upcoming restaurant on the window that showed images of people eating on the patio. “I thought, yeah, right, that’ll never happen.”

The first lunch was packed with invited friends, McLaughlin recalled. People could barely walk through the place.

At night, however, it was “crickets,” he said.

McLaughlin said Pete’s lost money the first year, but became profitable by the end of the second year after the dinner business started picking up.

Kohlhof, who attended the opening day lunch, continues to be one of Pete’s regulars. He still lives in the Old Bank District and is at the restaurant almost every night of the week.

“Before that it was almost like living college dormitory-style where we had drinks at people’s homes,” Kohlhof said. “Pete’s gave us a place where we could come together.”

For Gilmore, the restaurant is more than just a business. It’s part of the fabric of the Old Bank District.