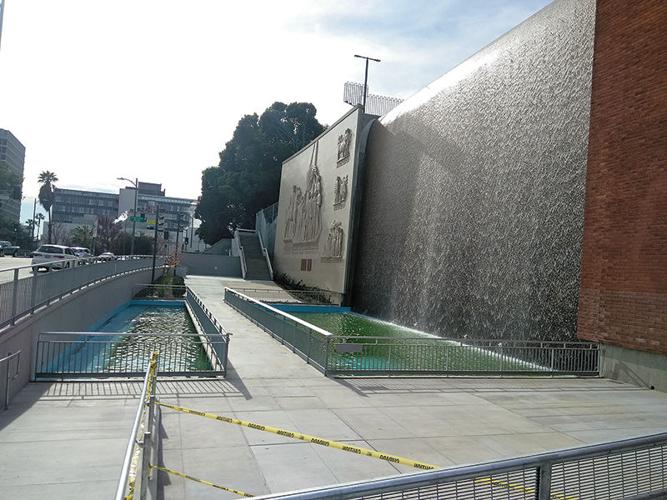 On Dec. 13, the waterfall at the Fort Moore Pioneer Memorial monument was turned on for the first time since 1977. It had been shut off amid a drought, and soon fell into disrepair. 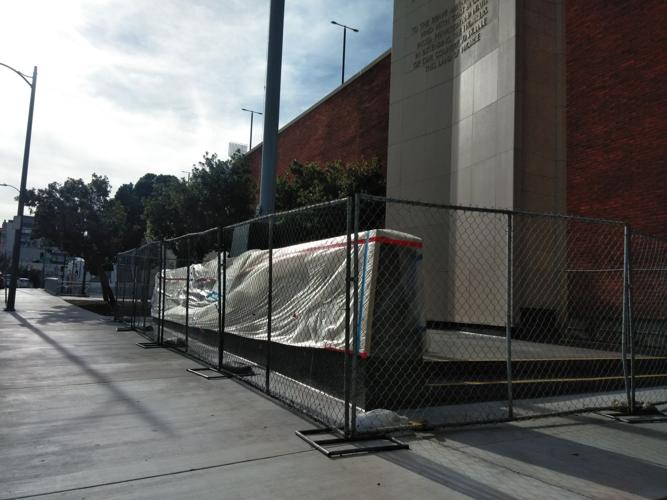 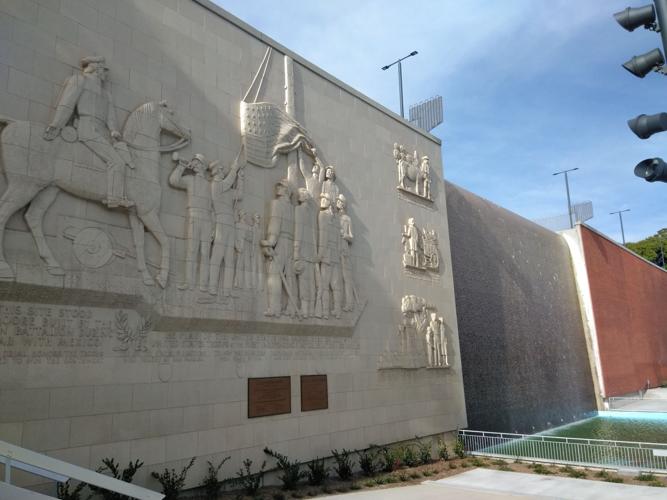 The sight may not seem special at first glance, but those who walk or drive by a stretch of Hill Street connecting Chinatown and the Civic Center will witness something that has not appeared for 42 years: a waterfall.

On Dec. 13, members of the Los Angeles County Arts Commission quietly flipped a switch and the water began flowing at the Fort Moore Pioneer Memorial in Downtown Los Angeles. The move received little fanfare, but it marked the first liquid activity since a drought prompted officials to turn off the water in 1977.

“This has been years and years in the making,” said Clare Haggarty, deputy director of collections for the Los Angeles County Arts Commission’s Civic Arts Program, which helped lead the overhaul of the monument. “It had become a desolate no-man’s land.”

U.S. Bank Tower Up for Sale

Located at 451 N. Hill St., across the street from the under-construction LA Plaza Village apartment complex, the Fort Moore monument was dedicated on July 3, 1958. The project, which took 10 years to design, plan and build, commemorates the Mormon Battalion and the New York Volunteer American military forces that first raised the United States flag in the recently acquired California territory on July 4, 1847. The monument is one of 10 memorials across the country dedicated to the battalion.

The monument’s terra cotta relief was designed by German sculptor Henry Kreis and depicts the flag raising. It contains three other images that represent Spanish ranchos, prairie schooners (a type of mid-century stagecoach used by settlers), and industrial innovations that made Los Angeles suitable for incoming settlers.

A 1977 drought led the County to shut off the waterfall. In the wake of that move, Haggarty said, the monument fell into a state of disrepair. It was neglected and became a gathering place for homeless individuals, skateboarders and taggers.

Restoration work began in earnest that year. The County Public Works department took the lead, with the County Arts Commission brought in to ensure the repairs were in line with city historic monument guidelines.

Repairs included completely redoing the tile work behind the waterfall, replacing the waterfall pools and retrofitting the piping to allow for adjustable water flow. Haggarty said that allows them to conserve resources when necessary.

“If you want the full Niagara Falls effect, you can turn it up,” Haggarty said.

The Downtown-based company California Pottery and Tile Works was tasked with kilning close to 300,000 tiles for the restoration. CEO Sean McCleen said that workers cut the tiles by hand into one-by-two-inch pieces before delivering them to the construction site. He was struck by the state of disrepair.

“It was pretty much falling off,” McCleen said. “They had attempted repairs a few years ago and the repairs looked terrible so it all had to be completely cleaned off.”

Another challenge, Haggarty said, was the age of the monument. She noted that some of the minerals and chemicals that went into the original clay no longer exist or are not used in construction anymore, which made matching the colors difficult.

“There was a lot of trial and error,” Haggarty said.

Now some people are noticing the brightened monument and the flowing water. That includes Chinatown resident Tim Healy, who was walking by the spot last week.

“Now it looks great. But to be honest, I’ve never thought that there was anything wrong with it,” Healy said on a Tuesday afternoon. “It looked kind of run down, but so do a lot of other places. I didn’t know it was actually a waterfall.”

While crews worked on the project, they unearthed a time capsule that had been buried during the monument’s 1958 commemoration. It held notes and designs from Mabel Davis, a Los Angeles Mormon woman who worked for 25 years to get the monument approved. Photographs, newspapers from the day of the commemoration, city budgets and other historical items were also found.

Haggerty said the work on the site is not completely finished, and upcoming improvements will include restoring a portion of the monument in front of the historic flagpole. She said that once the repairs are done the county plans to hold an event, which will include the burial of another time capsule. The Arts Commission plans to seek input on what should go into the capsule.

Haggarty said the hope is that once the project is complete, the space can host receptions and other public programs.