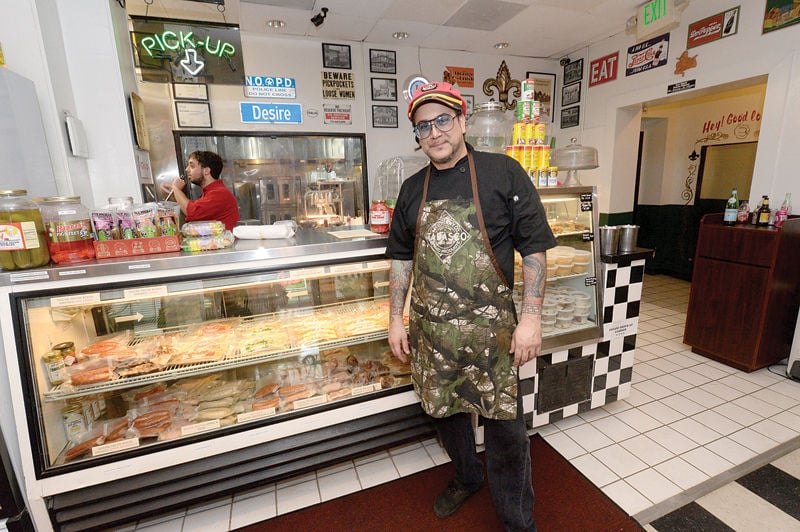 Marcus Christiana-Beniger, owner of Little Jewel of New Orleans, is one of a number of proprietors bringing new dishes, and plenty of culinary hype, into Chinatown. 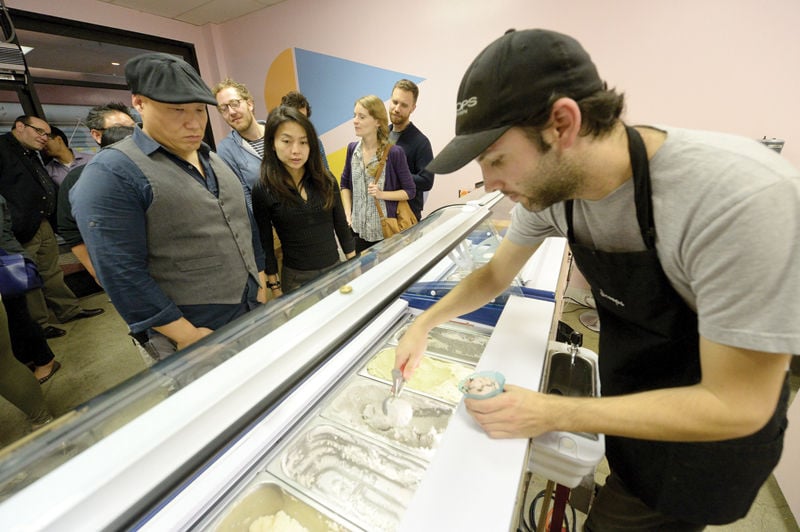 The artisanal ice cream shop Scoops debuted last spring in Far East Plaza on Broadway. It is one of four new, non-Chinese establishments to open in the aging complex.

Marcus Christiana-Beniger, owner of Little Jewel of New Orleans, is one of a number of proprietors bringing new dishes, and plenty of culinary hype, into Chinatown.

The artisanal ice cream shop Scoops debuted last spring in Far East Plaza on Broadway. It is one of four new, non-Chinese establishments to open in the aging complex.

DOWNTOWN LOS ANGELES - For decades Chinatown, predictably, has been a destination for Chinese food. Whether it involved Sunday mornings grabbing from the carts at the dim sum palace Empress Pavilion, or visiting Yang Chow for the almost famous “slippery shrimp,” people have flocked to the neighborhood for the traditional fare.

Those options still exist, and they still draw crowds. However, they are no longer the only choices. In the past couple years a flurry of new eateries, many helmed by young, attention-generating chefs and owners, have entered the Chinatown market. What’s more, the trend looks to continue into the future.

The new eating options run the culinary gamut, everything from Creole and Cajun to Japanese to Mexican to an indecipherable fusion of pan-Asian and American. In the process they have given Chinatown a trail of dining hype and excitement that the neighborhood hasn’t seen in years.

It’s no coincidence that the growth of the Chinatown culinary scene follows on the heels of the development in the heart of Downtown Los Angeles. As the area’s population has swelled from about 18,000 at the turn of the millennium

to more than 50,000 today, restaurateurs have rushed to the area, opening in communities such as the Historic Core, South Park, the Arts District and City West. Now, with some new housing projects coming to Chinatown, it’s little surprise that people in the restaurant industry are looking there, too.

Marcus Christiana-Beniger, chef-owner of Little Jewel of New Orleans, has lived in Downtown for nearly 18 years and opened the restaurant at 207 Ord St. in August. Chinatown is primed for a generational shift as younger residents and business owners arrive, attracted by reasonable rents, development potential and the historic personality of the neighborhood, he said.

“This place has unbelievable potential,” Christiana-Beniger said. “I’ve had Chinese and Vietnamese people come up to me asking whether there are young people who might buy their business. There’s an aging population that is looking to retire and they’re interested in seeing a new generation keep Chinatown going.”

Christiana-Beniger is joined by a cadre of restaurateurs who might not be familiar to patrons of Downtown power lunch spots, but who generate serious buzz on Internet food sites. One of them is Andy Ricker, the Thailand-obsessed chef who has won praise for restaurants in Portland and Brooklyn. His Pok Pok Phat Thai, a small shop dedicated to phat Thai noodles and a few other regional dishes, opened in December at Far East Plaza (at 727 N. Broadway). A second, larger Pok Pok restaurant is slated to arrive in the spring at the nearby Mandarin Plaza.

Soon to join them is Leonard Chan, best known for creating numerous eateries in Anaheim’s Packing House food hub. He is bringing a half-dozen concepts, including a craft beer bar and a speakeasy-style cocktail bar, to the ground floor of the Jia apartments at 639 N. Broadway. They are tentatively scheduled to open in June.

Also open is the Lobsta Shack, an offshoot of the popular Lobsta Truck, at 701 W. Cesar E. Chavez Ave., and General Lee’s, a new bar with a tiki vibe, at 475 Gin Ling Road. Both began serving in November.

The trend even extends to dessert. The artisanal ice-cream shop Scoops debuted last spring in Far East Plaza.It is currently hosting another newcomer in the form of a pop-up of lauded local coffee shop Cognoscenti.

The one restaurant that arguably put Chinatown back on the food map, however, was Roy Choi’s Chego. Soaring with buzz for his Korean-Mexican taco truck Kogi, Choi opened a brick-and-mortar version of the rice-bowl joint in 2010 in the Palms district before moving Chego to Far East Plaza in May 2013.

Choi, an L.A. native, grew up going to Chinatown and said he long had dreams of opening a restaurant there. The opportunity came amid trouble renewing the Palms lease; Choi toured Far East Plaza with George Yu, head of the Chinatown Business Improvement District, who had been pushing for Choi to enter the neighborhood.

“There are so many plazas and spaces in Chinatown. So many markets and stores to supply any needs. And so many residents,” Choi wrote in an email. “The residents are down for anything as far as I’ve seen. And if they aren’t, they will let you know. This is Chinatown, don’t ever forget that.”

A month after opening, Chego was joined by another attention-generating restaurant, Starry Kitchen, which emerged as a pop-up serving dinner at the Grand Star bar at 943 Sun Mun Way. Co-owner Nguyen Tran, who had been based in Fred Eric’s Fashion District bistro Tiara Café, said he was lured by Chinatown’s history and the chance to bring a different kind of Asian cooking to the neighborhood. He pointed to the difference between Chinatown and the San Gabriel Valley; the latter now reigns as the regional destination for authentic Chinese meals.

“We know that Chinatown can’t compete with San Gabriel and other Chinese neighborhoods for that type of food,” Tran said. “I think landlords are accepting that and accepting new business types. It’s fun to be in a changing community.”

A big draw for businesses are the lower rents found in Chinatown compared to other Downtown neighborhoods, said Derrick Moore, a broker at Avison Young. In Chinatown, rents average around $3-$3.50 per square foot a month; in Downtown districts such as South Park or the Financial District, it’s closer to $4-$4.50 per square foot, he said. Chinatown also has a lot of foot traffic, and the success of eateries like Chego has made it a safer bet for entrepreneurs, Moore added.

“We’re seeing Chinatown essentially gentrify, similar to other neighborhoods in Downtown. As that happens, we’re seeing a diversification of the customer base that may not have been there historically but is coming because of new retail and restaurants,” Moore said. “It’s benefiting everyone, including the historic Chinatown retailer.”

The big question, of course, is whether Chinatown will lose its personality amid an influx of new arrivals. The idea of old businesses being replaced by hipper ones remains a touchy subject throughout Downtown. Yet the Chinatown BID’s Yu notes that for the neighborhood to thrive, there needs to be growth.

Chan, who is leading the gourmet food-court concept at the Jia apartments, sees potential for a happy medium, with Chinatown becoming like Little Tokyo today — a mix of old and new, with the neighborhood’s cultural background largely intact. Little Jewel’s Christiana-Beniger said that, contrary to what one might assume, his neighbors were initially worried that he was opening another Chinese restaurant to compete with the ones already there.

“I know the perception might be that the neighborhood is pissed because an outsider is taking over a space,” he remarked. “But right now there are Chinese people who have been here for a while and have seen the same things for a long, long time. They want variety just like anyone else.”

Chinatown’s demographics will continue to shift as more new housing opens. The second significant development to debut in Chinatown, after Jia, will be Blossom Plaza. Developer Forest City’s project will bring 237 apartments and 19,000 square feet of retail space to 900 N. Broadway when it opens in spring 2016.

The project will include up to four new restaurants, said Frank Frallicciardi, vice president of development for Forest City. The company is aiming to bring in local restaurant concepts, both Asian-inflected and not, to cater to a young crowd as well as “empty-nesters” who are returning to a revitalized Chinatown, he said.

The important thing, Chego’s Choi notes, is that newcomers bring not only fresh ideas, but an understanding and appreciation of Chinatown’s rich history. Or, as he puts it, “respect and love.”

Five Spots That Have Long Been Chinatown Favorites

The batch of hip new eateries in Chinatown is garnering attention on Internet food sites, and the blogging crowd, armed with cameras, swarms any just-opened establishment. However, the neighborhood is still dominated by older restaurants, many of which remain extremely busy, even if they don’t get the buzz. Here are five spots that continue to feed the hungry.

Eat It Up: A Chinatown classic, Yang Chow continues to lure customers with favorites such as slippery shrimp (battered and fried shrimp tossed in a sweet, tart sauce), kung pao squid and fried rice.

Eat It Up: This bakery, which opened on Broadway in 1977, is famous for its fresh strawberry whipped cream cake. There are also almond cookies, sugar butterflies and a variety of baked goods to satisfy any sweet craving.

Eat It Up: This warehouse-like Thai superstore holds a hidden lunch counter that serves delicious Northern Thai dishes, including a fragrant green curry and a fiery larb, a warm mixed salad of meat, herbs and chiles.

Eat It Up: Chinatown has a big contingent of Vietnamese residents, so it’s no surprise that Pho 87 has some of the best noodle soups in Downtown, featuring a balanced and addictive broth. Don’t forget it’s cash-only.

Eat It Up: This is the perfect place to pick up a heaping plate of food on the cheap. Trusty Americanized classics like sweet-and-sour pork sit alongside roast duck and dim sum staples such as char siu bao (soft steamed buns filled with barbecue pork).