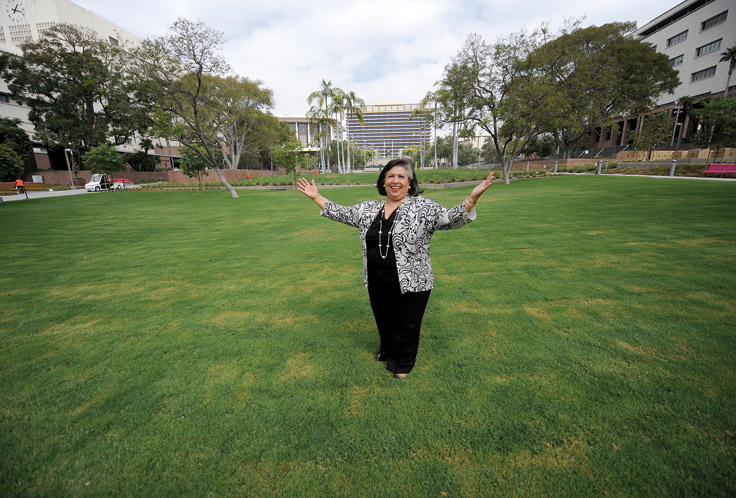 Supervisor Gloria Molina in one of two performance lawns, part of the $56 million Grand Park that opens on Thursday, July 26. Years ago Molina pushed for a provision requiring a developer to pay money for the project before any ground was broken on the rest of the Grand Avenue plan. 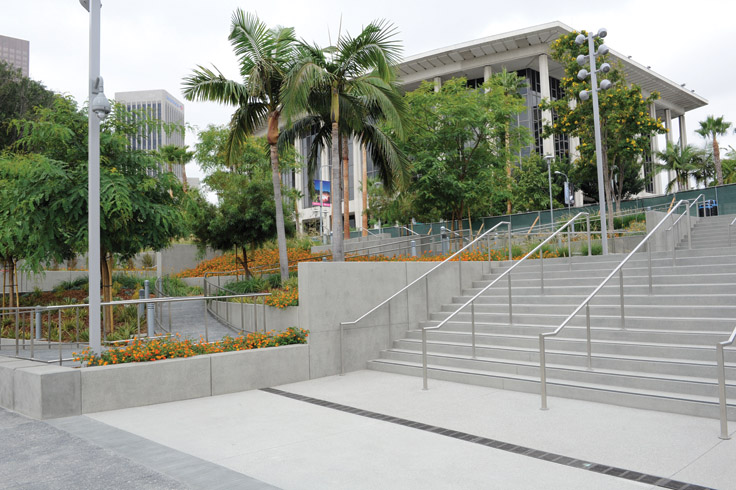 The 12-acre space has improved sightlines. Twin circular parking garages near the Grand Avenue side of the project have been replaced by a large staircase.

Supervisor Gloria Molina in one of two performance lawns, part of the $56 million Grand Park that opens on Thursday, July 26. Years ago Molina pushed for a provision requiring a developer to pay money for the project before any ground was broken on the rest of the Grand Avenue plan.

The 12-acre space has improved sightlines. Twin circular parking garages near the Grand Avenue side of the project have been replaced by a large staircase.

DOWNTOWN LOS ANGELES - In 2006, when a cadre of top city and county officials were bundling together some choice publicly owned parcels to create a billion dollar development site along Grand Avenue, Supervisor Gloria Molina almost killed the deal.

It is common for developers to pay for community upgrades in exchange for special zoning benefits or the right to build on choice government land. Molina, however, wanted the developer to pour in $50 million in advance to pay for a major upgrade to an underutilized park.

Despite warnings that the demand would scare off developers, the condition was written into the bid package for what was known as the Grand Avenue project. It was ultimately won by New York-based Related Cos.

Five years later, with construction financing still out of reach for its planned $2 billion mega project, Related has not put a single shovel into Grand Avenue dirt. Thanks to that $50 million up-front payment and nearly $7 million in accrued interest, however, the park is almost done. The newly named Grand Park is set to partially open on Thursday, July 26.

It is a lavender-scented expanse of grassy lawns and performance spaces, with seating areas amid mini-gardens studded with cacti. There is a fenced-in area for dogs and a series of ADA-compliant pathways that connect the Music Center Plaza at Grand Avenue with City Hall.

On Thursday, the half of the park closest to Grand Avenue will open, and a series of performances and cultural events will take place through Sunday (see sidebar on page 11). The parcel bounded by Hill Street and Broadway is slated to open next month and the site across from City Hall is set to come online Oct. 6, in time for the next day’s CicLAvia.

Molina said her demand for an up-front payment for the 12-acre park was inspired by a previous failed attempt to leverage private Downtown development dollars into public benefits.

While on the City Council in the late 1980s, Molina helped craft special zoning rules in Central City West. The regulations gave property owners rights to build taller, denser buildings in exchange for funding streetscape improvements and affordable housing. Nearly 100 families were relocated via eminent domain to make way for future development. Then the economy tanked.

Property owners never built the skyscrapers. The affordable housing never materialized either, at least not in large amounts. In fact Geoff Palmer, a developer of thousands of luxury apartments in the area, challenged the legality of the neighborhood affordable housing requirement. He won in court.

“The community got screwed at the end of the day,” Molina said. “So this time, I was a little wiser by that experience and did it the other way around.”

Previously, the civic park stretched from Grand Avenue to Broadway between the Stanley Mosk Courthouse and Kenneth Hahn Hall of Administration. The hundreds of county employees who work in those two structures accounted for the vast majority of park users.

The park’s design and layout obscured it from points of view along Grand Avenue and Broadway. Improving visibility and easing pedestrian access to the site were among the key drivers of the design by architecture firm Rios Clementi Hale Studios (Charles Pankow Builders handled the construction, which began in the summer of 2010). People at the western edge of the complex now have an unfettered view all the way to City Hall.

The design emphasizes active use of the park. The newly added quadrant between Spring Street and Broadway has a one-acre lawn and a large stage. The section just west of Hill Street holds a smaller lawn with a mini stage. All four sections of the park are equipped with the infrastructure to support concerts and portable video screens.

Aside from the design, the park’s most significant change may be a new focus on programming. The Music Center was tapped to manage the park, which could host not only concerts but yoga, laser shows and big family events, said Lucas Rivas, who was recently hired by the Music Center to be the director of the park.

“The sky’s the limit,” Rivera said.

The renovated Arthur J. Will Memorial Fountain is another key change. It will no longer be just a concrete structure with surrounding spouts. Instead, it is now a carefully choreographed, “interactive” sculpture with multicolored lights. It shoots jets of water that end up in a new, adjacent “membrane pool,” a swath of slightly depressed concrete that people can walk in.

On Thursday, a bevy of public officials involved in the park’s development will gather to celebrate its opening. There has been less cause for celebration when it comes to the remainder of the Grand Avenue project.

Progress, however, may be at hand. Bill Witte, president of Related California, said the firm has a financing agreement in place to fund construction of a proposed 19-story, 260-unit apartment tower that would rise just south of the $100 million Broad museum. Related is required to break ground by October. Witte said the firm is on track to meet that deadline.

The future of the other Grand Avenue project parcels is less certain. The project is comprised of four plots of land: one holds the under-construction Broad museum (there is enough room on the property for an adjacent tower); the site of the 19-story tower; and two parcels across from Walt Disney Concert Hall, including what is known as parcel Q, where Related planned to build two luxury residential towers designed by Frank Gehry with a boutique hotel and 250,000 square feet of retail space. Before the downturn, the entire project had been estimated at $2 billion.

With financing for the mega project so far out of reach, Related has gotten several extensions on past deadlines to break ground on parcel Q. Witte has long acknowledged that the company is rethinking plans for the site, but would not discuss the current proposal.

Potential alternatives for parcel Q could get an airing later this year, as Related will ask for another extension to break ground there, Witte said. The city-county joint powers panel overseeing the project has the authority to demand that Related start building if projects of a similar magnitude are rising elsewhere in the state.

Witte maintains that similar projects are still not happening, even as smaller developments are moving forward in Downtown. Molina, however, said she may be more reluctant to grant an extension come February in light of recent activity in the real estate world.

“I don’t want to get to that place where we’re just going to move Related out, but it’s up to them,” she said. “Other people are building in Downtown Los Angeles. I don’t know how they do their financing, but it’s happening.”

That discussion won’t start in earnest until early next year. For now, the focus is on the park.

July 26, noon: City, county and other officials will hold the formal opening ceremony for the $56 million project.

July 28, 10 a.m.-2:30 p.m.: Nigel Lythgoe from “So You Think You Can Dance” hosts the West Coast National Dance Day Celebration at the park. Learn easy moves and take in a performance by members of the Cirque du Soleil Iris troupe. There will be free dance classes, youth performances and family festivities. Information at dizzyfeetfoundation.org. Food trucks will be on hand.