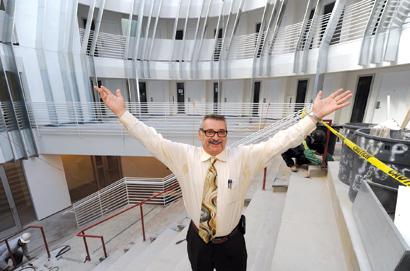 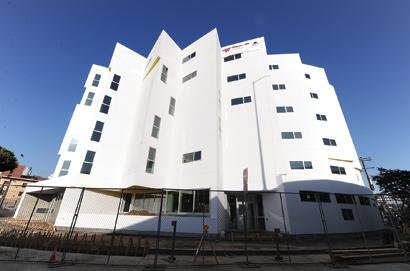 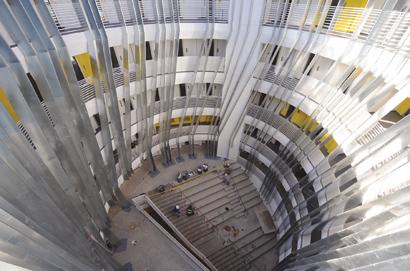 The Michael Maltzan-designed New Carver Apartments, at 17th and Hope streets, boast a striking, circular design. The unusual shape helps cut the impacts of noise and pollution from the nearby 110 Freeway. Photo by Gary Leonard.
1 of 3

DOWNTOWN LOS ANGELES - When the developer of the New Carver Apartments celebrates the building’s grand opening this week, at least one question will not be a point of concern: how to fill the 97 units.

While the developers of market-rate projects throughout Downtown Los Angeles are scrambling to lure renters and buyers in the current economy, the New Carver’s apartments are reserved for homeless, disabled residents.

The New Carver is not the only new project providing permanent supportive housing, which in addition to a bedroom offers inhabitants a suite of services such as job training and mental health counseling. What really sets the building apart, however, is the striking, modern design by a prominent architect whose resume boasts expensive homes and museums.

A ribbon cutting and grand opening party for the project at 17th and Hope streets will take place Thursday, Sept. 24. The event will also celebrate SRHT’s 20th anniversary.

It is an appropriate venue for the occasion, as the New Carver in some ways represents the culmination of two decades of building supportive, affordable housing projects, said SRHT Executive Director Mike Alvidrez. In particular, he said, architect Michael Maltzan’s circular edifice exemplifies SRHT’s commitment to pushing the envelope in terms of affordable housing design.

“We’ve really learned the significance of design in the work that we do,” said Alvidrez. “It’s got to have a non-institutional feel, because a lot of these folks have fallen through just about every institution you can think of. Secondarily, we want to make sure that what we design and build is an asset to the community, so that people feel good because of its appearance and the way it’s maintained, whether they know what it’s there for or not.”

Silver Lake-based Maltzan has a plethora of high-profile buildings on his resume. He has done single-family homes and commercial projects such as Pasadena’s Kidspace Children’s Museum and a temporary home for New York City’s Museum of Modern Art.

Despite that, he keeps an eye on Skid Row and regularly works with SRHT. The New Carver is the second of three collaborations with the developer: The red-flecked Rainbow Apartments on San Pedro Street opened in 2006, and the proposed Star Apartments at Sixth and Maple streets is in the early stage of development.

The curved white exterior of the New Carver, at 325 W. 17th St., was designed partly to buffer noise from the adjacent 110 Freeway and save money, said Maltzan.

“Acoustically, every foot that you get away from the noise source improves the ability to deal with that sound,” he said. “Also, we were looking at trying to create the most efficiency in terms of surface area in the building, and that had to do with costs.”

The round building also serves the more intangible goal of fostering a connection between the property and the surrounding area. To drivers on the nearby freeway, the building “becomes a very animate form,” said Maltzan. “It seems like it’s almost turning with you, and that sense of a visual connection was something we were very much trying to achieve.”

The theme of connection recurs throughout the building’s communal spaces.

The spacious lobby, which holds a security desk and offices for property managers and service providers such as case managers and nurses, leads to an open, circular courtyard in the project’s center. The building’s six floors spiral up around the courtyard, with the 270-square-foot efficiency units (there are 95, not including two apartments reserved for property managers) facing each other.

The ground floor also holds a community kitchen with industrial-quality equipment. A garden on the north side of the building will be planted and maintained by residents.

A third-floor community room, which sits level with and features a glass wall facing the freeway, is one of the New Carver’s most unusual spaces.

“It is like a front porch to the highway, to the people driving by,” said Maltzan. “I think that’s important, to forcibly not allow these buildings to become completely internal and hermetic but to look for opportunities where they can open up and encourage a sense of connection to the life of the city.”

The New Carver’s crown jewel is something normally touted in upscale apartment and condominium complexes: a sky deck. The sixth-floor space offers an expansive view of Downtown and beyond, from the Convention Center and City Hall to the Hollywood sign. Again, the goal is to encourage a feeling of community, said Alvidrez.

“The view perch and the community room facing the freeway are to continue that engagement, that you are a member of this community,” said Alvidrez. “We want people to engage in social interactions that are positive.”

SRHT this month began accepting applications for the New Carver, which takes its name from the demolished Carver Hotel, a former low-income housing project on Fourth Street. Residents are expected to begin moving in next month, said Alvidrez.

Apartments will be leased on a first-come, first-served basis to qualified homeless individuals with mental or physical disabilities. To qualify, applicants must provide third-party confirmation that they are homeless, low-income and disabled and also pass a criminal background check by the Los Angeles Housing Authority that screens for serious drug-related convictions and other crimes. Rents will be based on a sliding scale in which individuals pay 30% of their income each month, said SRHT Director of Special Projects Molly Rysman.

“That allows us to target people who have really low or no incomes,” she said.

The project will have benefits beyond Downtown, said City Councilwoman Jan Perry, whose Ninth District includes the New Carver.

“I think the need is great not just in Downtown but on a citywide basis,” said Perry. “I think it’s a great model for creating support for older people who are chronically homeless, and I hope that people look at this project and realize not only is it beautiful and could fit into any neighborhood, but it fills a need.”

The financing equation for the $34 million New Carver is similar to any market-rate project. The overall budget, which was financed by tax credit equity as well as city, state and other affordable housing funds, includes construction costs and various fees, said Alvidrez.

While the building is ready to open, SRHT is not immune to the ongoing recession that is impacting so many, said Alvidrez. He noted that county and state funds for on-site services are harder to come by this year. SRHT is still trying to secure money for some services for the New Carver, including primary medical care and mental health counseling, he said.

Construction financing for future projects is also scarce. The timeline for the Maltzan-designed Star Apartments, for example, will depend on SRHT’s ability to raise money. Alvidrez declined to reveal that project’s budget.

“We are seeing that sort of logjam on the investment and lending side,” he said. “Until the economy starts to improve, it’s going to keep credit tight.

SRHT will celebrate its most recent addition to Downtown with a party on Thursday. The festivities at the New Carver will begin with a ribbon cutting, silent art auction and interior design showcase. Confirmed guests include city officials such as Perry, Hollywood glitterati including actor Tobey Maguire and folk-pop stars the Watson Twins, who will perform at the event.

“It’s special because it is our 20th year,” said Alvidrez. “Typically we’ll do a grand opening where we’ll invite people to join us in the opening of a building, but here we’re also celebrating the 20 years of work that we’ve done and what we’ve learned in that time.”