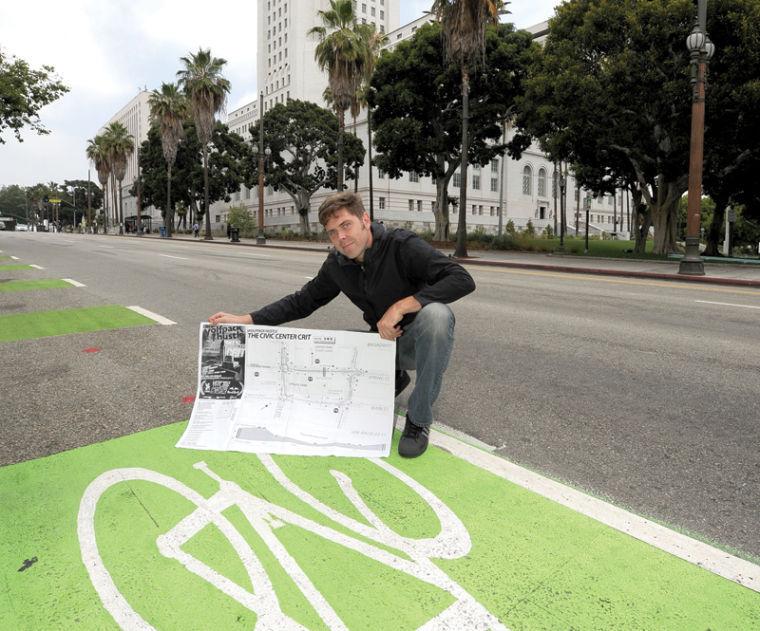 Don Ward started Wolfpack Hustle, a fast-riding bicycle crew, in 2006. He’s behind a race around City Hall on Sunday, June 23. 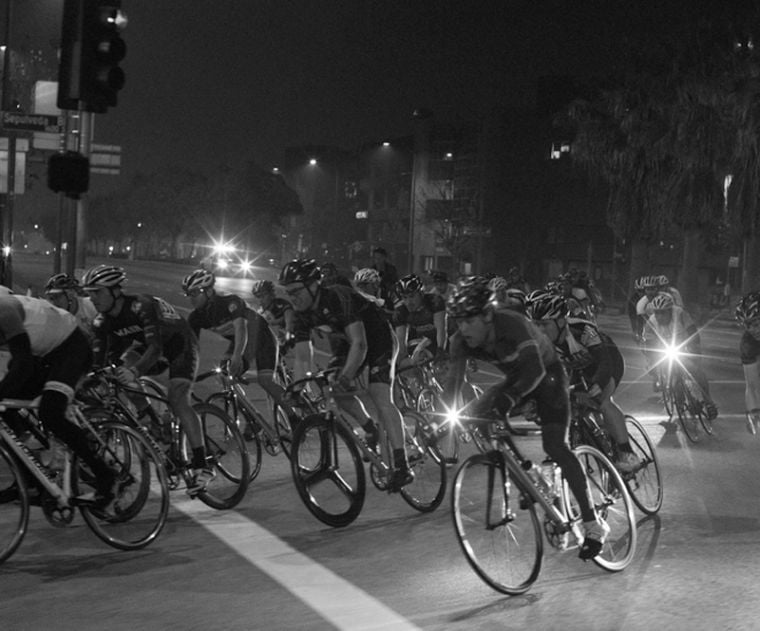 Riders take a corner during this year’s Wolfpack Hustle Marathon Crash Race, which follows the course of the L.A. Marathon starting at 4 a.m.

Don Ward started Wolfpack Hustle, a fast-riding bicycle crew, in 2006. He’s behind a race around City Hall on Sunday, June 23.

Riders take a corner during this year’s Wolfpack Hustle Marathon Crash Race, which follows the course of the L.A. Marathon starting at 4 a.m.

DOWNTOWN LOS ANGELES - If CicLAvia is the lazy river of bike rides, another pedal party happening this weekend is the Class 5 white water rapids, rushing through tight bends and carrying boats of seasoned but somewhat reckless passengers.

On Sunday, June 23, CicLAvia will have tens of thousands of cyclists rolling slowly between Downtown and the Miracle Mile along Wilshire Boulevard. Once that ends, a smaller group of riders will be mashing full speed in the Wolfpack Civic Center Crit.

Crit races, or criteriums, pit riders against each other on looped courses. As they race through the streets — in this case, circumnavigating City Hall — riders that get lapped are immediately disqualified.

The Downtown event is organized by Wolfpack Hustle, a group of cyclists known for hosting a fast-paced, 30- to 60-mile Monday night ride that starts in Silver Lake and goes anywhere from Magic Mountain to Disneyland to the top of Mt. Wilson. The Central City streets for the course will be closed from 10 a.m.-10 p.m.

Since starting Wolfpack Hustle in 2006 as a spinoff of the popular group excursion known as Midnight Ridazz, founder Don “Roadblock” Ward has organized an array of recurring races, most of them underground events that go off without the sanction of city permits.

The Civic Center Crit, however, is closely coordinated with the city. The course starts by the Spring Street steps at City Hall, heads north to Temple Street, back south via Main Street, west on First Street and then, after a hairpin turn on First Street, back up Spring.

For safety measures, sharp turns will be buffered by hay bales. Ward said he has tweaked the layout to minimize the potential for pile-ups and crashes, both normal happenings in crit races.

Qualifying rounds, during which riders do four laps with their fastest loop giving them the chance to make the finale, go from noon-4 p.m. The finals, which are broken into groups of geared and fixed-geared bikes, with sections for men and women, start at 4 p.m., just after CicLAvia ends. Each finale race is 20 laps and can have up to 50 entrants.

Ward hopes CicLAvia participants will end their day as spectators of the crit race, which will include food trucks and other vendors. Although crit races are often held in suburban areas where weekend traffic is nearly nonexistent, Ward said it is important for the Wolfpack event to be in Downtown.

“I want to do it where the audience feels like they’re at one of our authentic races that we’ve been doing,” he said.

The Civic Center Crit is the latest step in Wolfpack Hustle’s evolution from a semi-renegade group to one that engages with the city process. A drag race in the Second Street Tunnel last year was permitted. The LAPD was on site, as were emergency medical officials.

That’s a far cry from the first drag race, in 2007, when the Wolfpack crew simply took over the tunnel, sharing it with cars until a parking enforcement officer saw what was happening and spontaneously directed traffic around the cyclists. The next year the LAPD shut down the race.

Then there was the All City Team Race, which from 2007-09 invited teams of five riders to race from Silver Lake to Dockweiler Beach. Teams picked any route and raced via the streets. Some took the freeway. Some rode against traffic or sped on sidewalks, prompting Ward to halt the races.

“It started to get too crazy,” he said. “It was getting dangerous for others.”

The big kahuna of Wolfpack events is the Marathon Crash Race, in which riders of all skill levels meet at 4 a.m. the morning of the L.A. Marathon and complete the course before the runners. The inaugural Crash Race in 2010 involved about 400 cyclists. This year, there were 4,000 mostly spandex-clad racers, including hardcore cyclists who flew in from points around the country, competing for the Wolfpack’s signature dog tags.

Now, by working with the city, Ward and Wolfpack Hustle are also building relationships with civic leaders who increasingly support bicycle-related initiatives. The Civic Center Crit, for instance, has the backing of 14th District City Councilman José Huizar.

“Promoting increased bicycle use is a priority for me,” Huizar said in an email. “The Wolfpack Hustle’s Civic Center Criterium is a great event and my office is happy to be assisting them in making sure that this year’s race is successful.”

A former art director for the websites of two big car companies, Ward considers himself a kind of countercultural propagandist, a man with a bullhorn and a video camera enticing kids to think bikes are cool.

“If you look at the big picture of how our roads have transformed, we’ve gone through this period of propaganda, programming people to want faster, faster cars,” Ward said. “If you’re going to change that, the propaganda has to address that.”

At the Civic Center Crit, it will be the bikes that are going faster, faster. There will be plenty of cameras to capture and disseminate the message.

CicLAvia, which runs from 9 a.m.-4 p.m., starts at Wilshire Boulevard and Grand Avenue. Event hubs with activities are at MacArthur Park, in Koreatown at Mid-Wilshire and at the Miracle Mile western terminus.