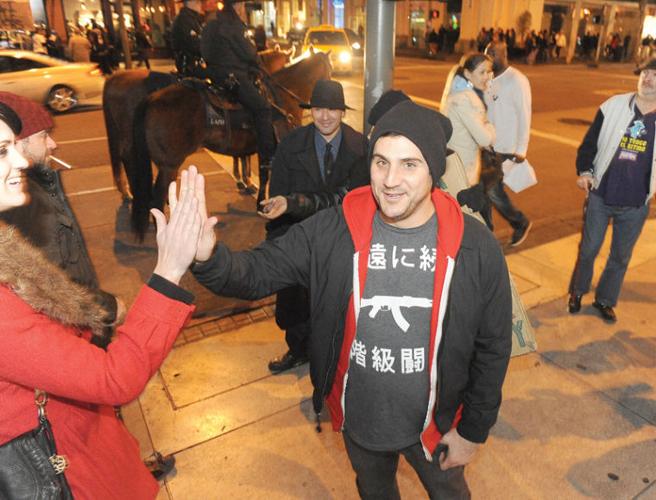 Joe Moller, executive director of Art Walk, during the January gathering that brings thousands of people to Downtown. In his two years at the helm he has made the event almost self-sufficient, largely through securing a series of corporate sponsorships. 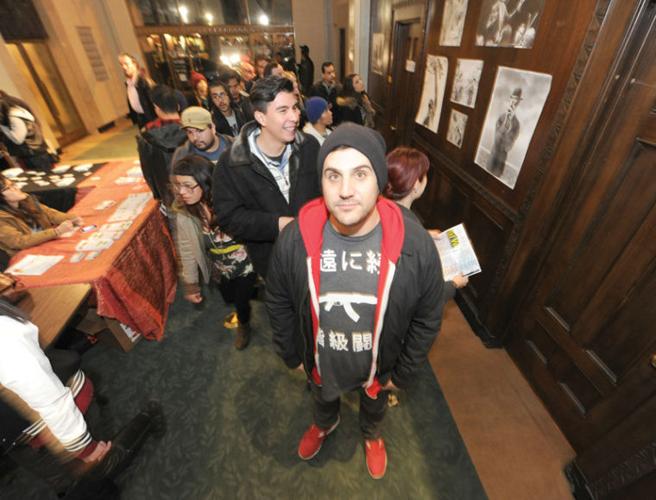 Moller in the Art Walk Lounge, the center of activity on the second Thursday of every month. 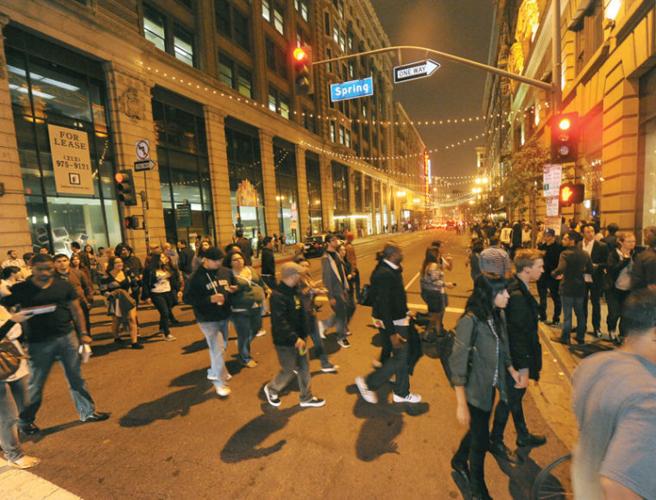 The event can attract tens of thousands of people to Downtown.

Joe Moller, executive director of Art Walk, during the January gathering that brings thousands of people to Downtown. In his two years at the helm he has made the event almost self-sufficient, largely through securing a series of corporate sponsorships.

Moller in the Art Walk Lounge, the center of activity on the second Thursday of every month.

The event can attract tens of thousands of people to Downtown.

DOWNTOWN LOS ANGELES - When Joe Moller oversaw his first Art Walk in January 2011, the monthly event was both struggling to emerge from a period of chaos and trying to define itself. Some even questioned whether the gathering, which in summer months lured tens of thousands of people to Downtown, would or should continue.

Moller was the first paid executive director of the Downtown LA Art Walk, the nonprofit that had been formed to lead the event. He was also its third leader in a little more than one year. He came aboard with some lofty goals to manage an event he said at the time was in “crisis mode.”

His tasks were many and varied. He had to address the future of an event that started off as a way to showcase galleries but had come to be known as a night of bar hopping. He also had a financial goal: A group of Downtown stakeholders had put up money to sustain Art Walk, but only planned to do so temporarily. Moller had to find a way to bring in cash.

Then there were the challenges that by comparison seemed simple: He wanted a new website and more interactive Facebook and Twitter accounts to help the crowds that thronged the Historic Core. At the time he was hired, he said it would take about two years to address his aims and make the event self-sufficient.

Now, two years have passed, and while not all of the goals have been achieved, he and others involved with the event say that Art Walk is in better shape than it has been since its inception in 2004.

“We are not in crisis management mode anymore. Crossing that off is a huge success,” Moller said one afternoon last week while sitting at Pete’s Cafe. “I feel like we’re in the best position Art Walk has ever been in.”

Moller, 38, is a Downtown resident and events producer who previously served as the director of Anaheim’s Parks and Recreation Arts Program. He was tapped to lead Art Walk in December 2010.

His appointment came after the previous volunteer director, Jay Lopez, was fired in September 2010. Lopez had famously announced on the Art Walk website that the event would be cancelled.

Instead, the Art Walk board ousted Lopez and pledged to continue, but only after a group of eight Downtown property owners came up with $200,000 to support the event.

Moller has made strides on the financial front, and now has a budget of $225,000-$250,000 annually to support the event that takes place on the second Thursday of every month. Most of it comes from corporate sponsorships. Developer Tom Gilmore is the only one of the original stakeholders who still provides monthly support. He gives Art Walk about $2,000 a month, Moller said.

“We still receive financial support from him, which is less than one-tenth of our operating budget,” Moller said. “So for the goal of being self sufficient, yes we are, but we’re nowhere near the level of sustainability that we would like to achieve.”

Although Moller wants to reach a point where Art Walk has a “cushion” and can do things such as sponsor scholarships and programs to buy art supplies for needy youth, the program is able to pay its bills. That includes Moller’s $70,000 a year salary, as well as the $40,000 earned by the nonprofit’s only other paid employee, Director of Operations Qathryn Brehm.

The nonprofit also depends on a team of unpaid interns to help organize the happening.

Other expenses include monthly permit fees that have been as high as about $8,800 for city services. The fees for this year are being renegotiated with the city, Moller said.

“Financially, they’re virtually independent right now. The money I provide is more like gravy,” Gilmore said. “I think Joe has turned out to be an extraordinary thing for Art Walk.”

Since Moller took over, he has cemented deals with businesses including Brookfield Properties, Zippo, Converse, Smart Car, Red Bull, the WSS shoe company and Macy’s. Monthly sponsorships start at about $10,000, Moller said, and could include ads in the Art Walk map, product placement at the Art Walk Lounge (located at The Exchange L.A., a nightclub at 618 S. Spring St.) and more.

The result of the financial relationship can vary wildly. Last June, Zippo hosted a concert by Venezuelan band La Vida Boheme and gave away about 300 lighters. In November 2011, Art Walk teamed up with tourism officials from Malaysia to give away a trip for two to the country.

While some art purists may feel leery of the corporate ties, Marc Loge, a member of the Art Walk board, said what Moller has done is necessary to keep the event alive.

“Without sponsors, Art Walk wouldn’t be here,” he said. “We’re presented with a bill every month from the city for services that are rendered.”

Moller is at the center of it all. During last month’s event, he held court at the Art Walk Lounge. Dressed casually in jeans, a T-shirt and red sweater with matching red sneakers, he worked the crowd, shaking hands, patting backs, talking about the art on the walls and pointing people to the free food offered by the night’s corporate sponsor, the Taste FIGat7th food court.

Few people were commenting on the artwork, which featured impressive pencil drawings by Nick Begnaud and the colorful paintings of Irish artist Dee Craig. Instead, they were gushing over the food provided by some of the restaurants at the recently opened food court.

Once the food ran out, most of the crowd left the lounge.

Art Walk was formed in 2004 by gallery owner Bert Green to generate more attention and business for the growing Historic Core gallery scene. The event quickly grew into a popular attraction.

Even before Moller took over, it was commonly accepted that Art Walk had transformed into more of a monthly party than an event where people came to buy art. Bars and restaurants were usually packed. It had reached the point that certain galleries even closed on Art Walk night, knowing serious buyers were not in the crowd.

Still, Moller maintains that the growth of Art Walk can be measured by the number of participating galleries. He said the tally has risen from fewer than 20 to nearly 50 places — although before Moller took over, the Art Walk website listed about 37 galleries.

The current roster of galleries on the Art Walk website and map includes venues that some may not consider galleries, among them MOCA, which is a museum, and The Local Tourist, a clothing store.

Moller is adamant that all of the places that officially make up the Art Walk galleries deserve to be there.

“That list is for brick and mortar businesses who exhibit art on a regular basis,” he said.

The financial makeup of Art Walk is not the only thing that has changed, as certain longtime galleries have departed. Green closed his shop and left Downtown in 2011. The graffiti oriented Crewest closed its doors in December after 10 years in business. Drkrm, a gallery once located on Spring Street near Seventh that displayed documentary and photojournalistic work, recently moved to Chinatown.

Drkrm owner John Matkowsky said the move had nothing to do with Art Walk, and that he just needed more space. The event, he said, was never financially beneficial for him, so it was not a factor when he decided to relocate.

“At the beginning it was about art. Now it’s a party thing and we never sold anything during Art Walk,” he said.

Moller said the relocations or closures are out of his control. He points to other advances. The Art Walk website now provides a list of parking spaces near the event, making arrivals easier. Facebook “likes” for the Art Walk page have gone from 12,000 two years ago to more than 58,000 thanks to constant updates. The Art Walk Twitter page boasts 12,600 followers and there is now an Art Walk iPhone app.

The result, said Moller, is an event that encompasses all of Downtown and benefits the seller and makers of art.

“We invite people to the community,” he said. “We promote the galleries, we share their exhibitions, we tell their stories. We are their advocates.

“But at the end of the day, the market decides if they’re interested in the products or the exhibition. We have no control over that spending dollar.”

The next Art Walk is this Thursday, Feb. 14.