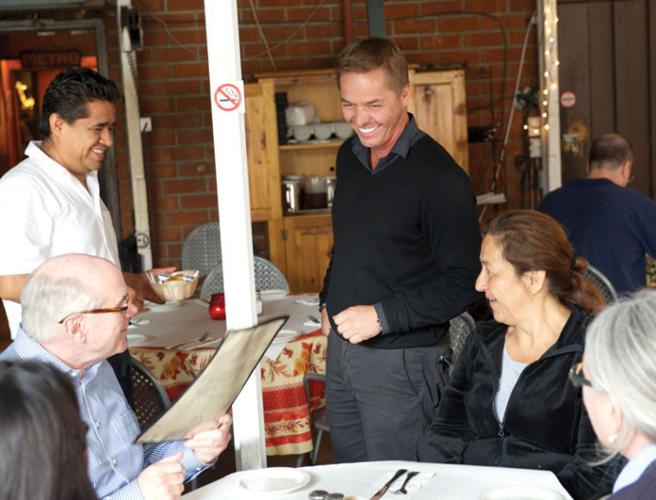 Benoit Lesure greets customers during the final weeks of French Garden. The Arts District restaurant cultivated a cadre or regulars who came for the cuisine and oasis-like setting. It will close May 24. 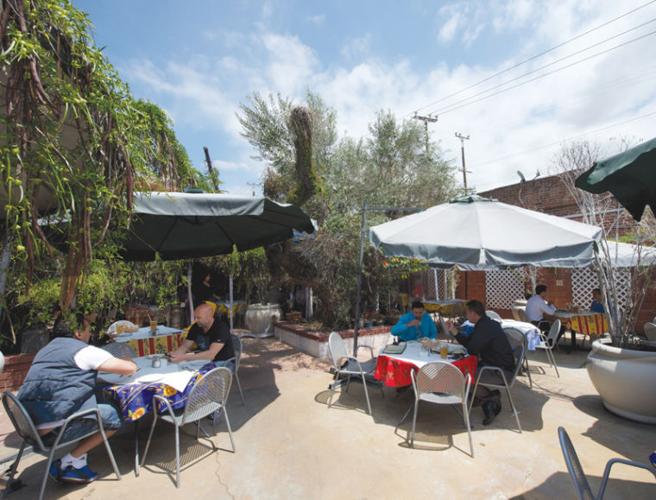 Benoit Lesure opened French Garden on a gritty portion of Seventh Street in the Arts District in 1998. The restaurant known for its lush patio will give way to a competitor willing to pay a much higher rent.

Benoit Lesure greets customers during the final weeks of French Garden. The Arts District restaurant cultivated a cadre or regulars who came for the cuisine and oasis-like setting. It will close May 24.

Benoit Lesure opened French Garden on a gritty portion of Seventh Street in the Arts District in 1998. The restaurant known for its lush patio will give way to a competitor willing to pay a much higher rent.

DOWNTOWN LOS ANGELES - Benoit Lesure still flashes his big, bright smile and greets his customers with the same jovial demeanor that he has for the last 15 years at the French Garden.

But it’s hard, he admits. It’s hard knowing that his last day in business is May 24, when he will close his doors to make way for another restaurant whose owners are willing to pay a much higher rent for the location he took a chance on in 1998.

“I love my customers,” Lesure said in a heavy French accent on a recent rainy Monday afternoon while sitting at a table on his patio. “I’ve put a lot of energy, hard work here. This is my home, my life here, but it’s a done deal.”

Still with a smile on his face, he slowly shrugged his shoulders and looked down at the table as Frenchie, the restaurant’s beloved, well-fed and sometimes cantankerous live-in cat, rubbed up against his leg. Longtime waiter Marcos Clara approached and stood next to Lesure.

“This is like my family,” Clara said, his eyes welling up and his voice cracking. “Everyone who works here is a family and we’re going to miss seeing each other every day.”

Using the nickname the staff has for the owner, he added, “We’re going to miss Benito.”

The 150-seat bistro, known for its lush garden setting hidden in the middle of an industrial portion of the Arts District, opened long before the boom that has attracted dozens of eateries to Downtown. Yet somehow, through a mix of solid French cuisine and the unexpected setting, it developed a cadre of loyal customers.

“When I first started here this was a no-man’s land and I started to bring friends who called it an oasis,” said Emma Schafer, a regular and the director of Los Angeles Current Affairs Forum. “This place has survived through the years while everything else has become very modern, trendy and developed around it.”

Dining with Schafer was David Woo, also a regular. He lamented the coming closure and noted French Garden’s role as a culinary pacesetter.

“You look at this place and it really is a jewel,” he said.

Lesure hopes to reopen his restaurant and re-create the patio somewhere else in Downtown. But he admits the search has not gone well. One option is taking the French Garden to the city of Commerce, where he has found another spot.

No matter where he goes, he hopes to take his staff with him, if they haven’t found other jobs by then. He’s hoping his customers follow him too.

Road to the Garden

Lesure came to the United States from France in the late 1990s and managed a French café in Sherman Oaks. Back in Perpignan, in the south of France, he had been a hotel and restaurant manager and dreamed of one day owning his own place.

He wanted a spot with a parking lot and a patio that would serve only lunch. In early 1998, he was shown the location off a gritty portion of Seventh Street. He instantly saw the potential in the single story structure with the walled-in patio.

“For me it was something real special. We bond together right away,” he said. “No one told me this was good. Everyone told me you are crazy.”

French Garden opened on Sept. 16, 1998. Lesure remembers his first customer was a friend who placed a small order.

“He ordered a soda and he gave me $2 cash and I framed it,” Lesure said.

With little advertising and a lot of word of mouth, people heard about the unexpected ambience. Once there, they dined on specialties such as the French brie sandwich, the tender hearts of palm salad and the salmon filet.

Business has been steady most of the time, though there have been slow periods. Traffic spiked in 2006 after Lesure got a visit from Huell Howser, the late public television host.

Howser, surprised to find a restaurant in the location, featured French Garden on the opening episode of his series “Downtown.”

“When the show aired, at least for one year we were jam-packed,” Lesure said.

Reruns have kept people coming through the years. Howser became a regular before his passing in January.

Ironically, Downtown’s success may be a factor in Lesure’s pain. In recent years the Arts District has become a destination as housing complexes opened and restaurants followed. Today Pizzanista is just east of French Garden on Seventh Street and the acclaimed new Bestia is nearby. A block north on Industrial Street is Church and State, another French eatery.

“There was nothing here before and now there are all these places, and we are not going to be here anymore,” Lesure said.

Lesure got the news on a Thursday afternoon in late January shortly after the lunch rush. His landlord walked into the restaurant to deliver a notice of termination and give him four months to leave. For years Lesure said he had been operating without a lease on a month-to-month basis.

Lesure recalled the landlord saying he was sorry, but that someone was willing to pay three times the $5,000 per month rent that Lesure was paying.

Mike Meraz, owner of Magnum Properties, Lesure’s landlord, said he gave Lesure a chance to match the higher rent before a lease was signed by the upcoming tenant, Enrique Ramirez, the owner of Señor Fish. He said the place will not be another Señor Fish, but a more upscale eatery. Meraz said the new rent is not three times the amount Lesure was paying, but is more than $10,000 a month.

Lesure’s first reaction to the notice to leave was shock. Then he thought about what he would do for a living.

After that his mind turned to his staff. Where would they go? What about his customers? He considers many to be friends.

Lesure kept the news to himself for a few days. Then on Monday, he gathered his employees inside the bar area and told them what was happening.

Next, Lesure had to tell his customers. Over the next few days he went table to table, telling people one at a time.

“It was one of the hardest things I’ve ever had to do in my life,” Lesure said.

Ernie Strapazon and his wife were among the regulars who heard about the closing from Lesure. The couple has been coming to the French Garden at least once a week for about 13 years.

“Our first thought is that we felt terrible for him because he has invested the past 15 years of his life making this place what it is,” Strapazon said. “Having this place pulled out from under you like that is really horrible.”

Lesure will have regular lunch service this week. He’s planning a small gathering on May 23 after lunch for his staff and any customers who want to say goodbye. There will be a few drinks and some food. The last meal will be served the following day.

Frenchie the cat has found a new home. A customer has agreed to take her, though she’ll have to get used to being indoors instead of roaming around the patio.

Lesure continues to hunt for a spot in Downtown, though he notes that the search isn’t going well. If nothing comes up, he will take his chances in the city of Commerce, which doesn’t have much of a restaurant scene.

But that’s OK, he says. He’s been there before.