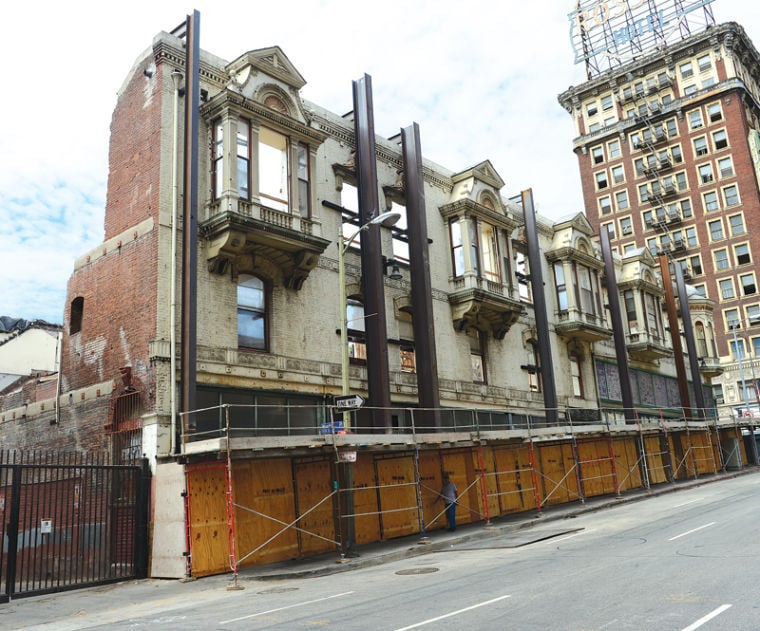 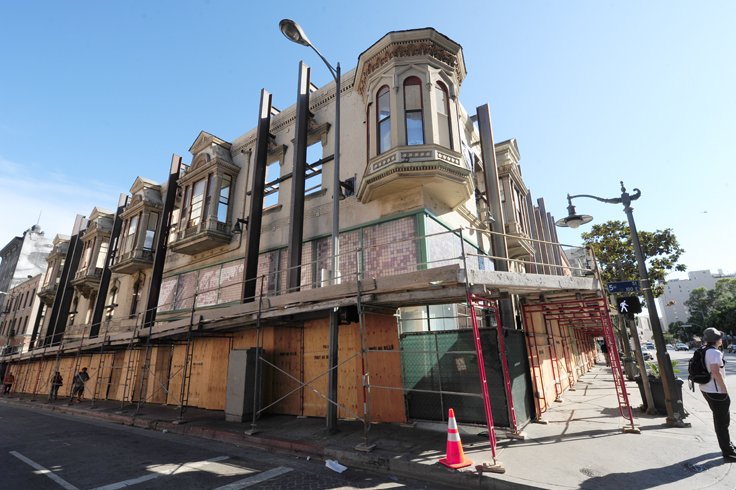 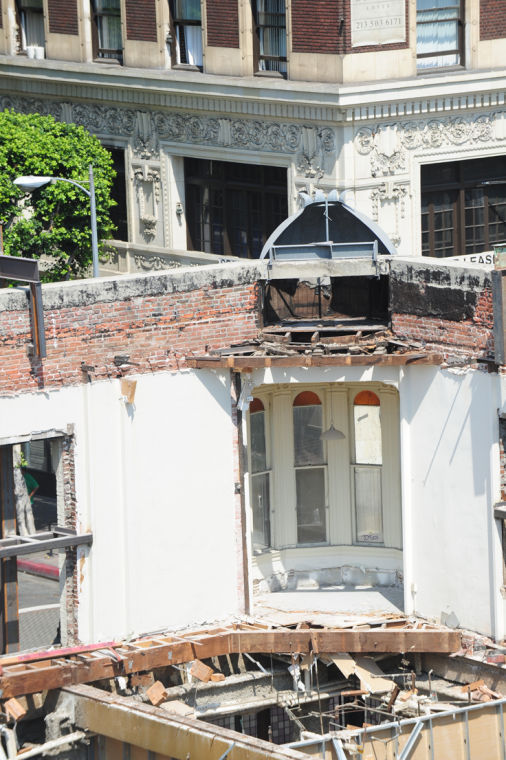 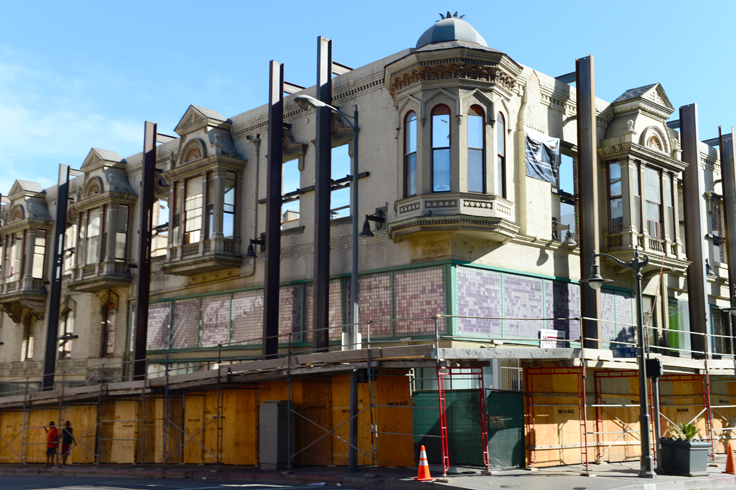 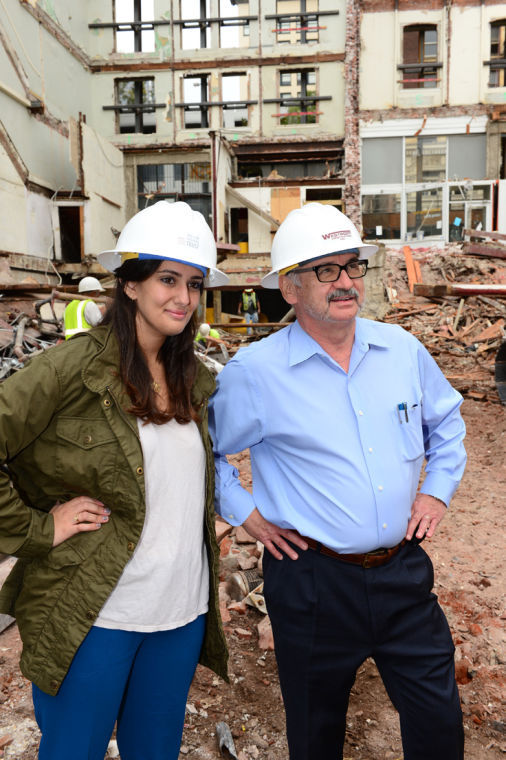 DOWNTOWN LOS ANGELES - Walking near Fifth and Main streets these days, it’s hard not to stop and look up.

The scene is halting: blue sky topping the roofless structure at 500 S. Main St., clouds visible through the only Victorian windows left in Downtown Los Angeles, and steel beams holding up the walls that stitch together the old Pershing Hotel and Roma Hotel buildings.

While the image hearkens to the past, the project is all about the future. Together the structures will become the New Pershing Apartments, a 69-unit, low-income housing development from Skid Row Housing Trust. The approximately $19 million project is scheduled to open in October 2014.

While one expects to see mounds of bricks and rows of nail-studded wood piled high when a building is being taken apart, those materials often have outlived their usefulness. At the New Pershing Apartments, being designed by Killefer Flammang Architects, the old pieces are gearing up for a second life: The company has gone to great lengths to preserve the facade of the building, and is also carefully saving interior elements such as handrails, window casings, woods planks and more so they can be re-incorporated into the new edifice.

“It’s a holy old building; you can’t approach it lightly,” said Wade Killefer, a partner at the architecture firm, who has worked on dozens of Downtown adaptive reuse projects. “You have to take the history seriously.”

The former Pershing Hotel dates to 1889, and the Roma Hotel, at 508 S. Main St., was erected in 1905. Although the Pershing was determined eligible for listing in the National Register of Historic Places in 1988, it was never declared a Los Angeles Historic-Cultural Monument, according to the project’s historic resource report prepared by Galvin Preservation Associates in Redondo Beach.

Still, the attention to the past is clear. With most of the interior gutted since the deconstruction began on May 1, and the historic elements set aside from the unusable debris, the Westport Construction Company has set up huge metal beams to hold up the original walls.

“We wanted to preserve as much of the original, historic fabric as possible,” said project manager Andi Israel.

Plus, it’s a greener way of doing things.

SRHT bought the properties at 500 and 508 S. Main St. in 1988. Although they operated as a single building, they had been set at different heights. Israel described the floors of the old structures as a “maze” with the second level higher in one building than the other, and staircases all around to connect them.

The New Pershing Apartments will have level floors and more spacious rooms, running 350-500 square feet, roughly three to four times larger than the original units. Of the 67 apartments (two units are reserved for management), 52 will be supported by Section 8 funding, a federal rental subsidy. The remainder are also designated for low-income residents.

Additionally, the New Pershing Apartments will have community space, social service offices and an outdoor courtyard in the center of the building.

What may be of more interest to Historic Core denizens is that the project will have ground floor commercial space, facing both Main and Fifth streets, pitched to the changing neighborhood. That follows what SRHT did with the nearby New Genesis apartments. The property, with 104 units mostly pitched to low-income individuals, has an ice cream shop on the ground floor, and a meatball restaurant is in the works. In that instance the retail was a response to requests by neighbors.

Alvidrez said that with the historic focus, larger rooms for residents and ground floor retail, the New Pershing will be an asset for the community.

Funding sources include the low income housing tax credit and the state’s Multifamily Housing Program, as well as city and federal monies, Israel said. In 1988, the Pershing was one of the first buildings to utilize a program that allows private investment to be infused into projects dedicated to low-income housing.

The last residents vacated the building this past New Year’s Eve, Israel said. She noted that most inhabitants were relocated to other SRHT properties.

Back at the site, as a John Deere excavator plucked heaps of steel from a rubble pile and swung it into the corner of the cavernous plot, Oscar Zendejas, assistant superintendent of Westport Construction, said he has worked jobs where the company wanted to preserve “cool stuff,” but not to the degree of the New Pershing.

As they pulled out tile and some historic handrails, he could see why.

“You can’t get this kind of look anymore,” Zendejas said. “It’s too expensive if you don’t preserve it.”