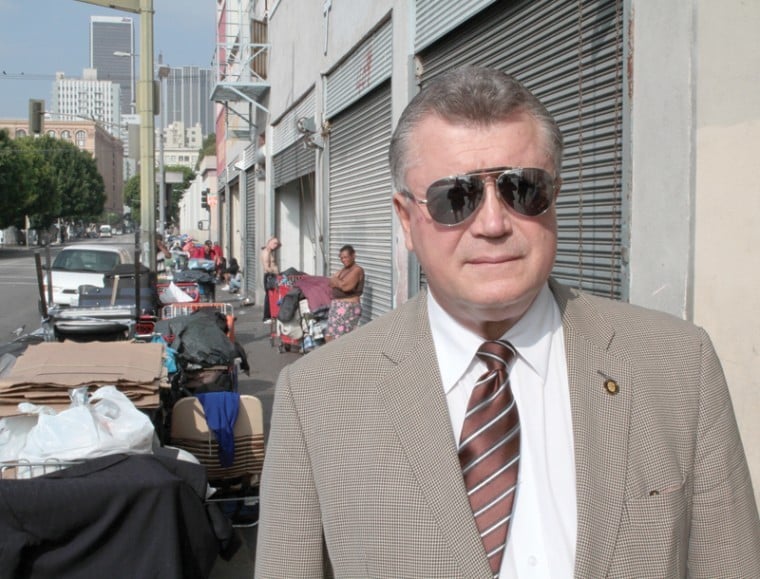 Carmen Trutanich wants to rid Skid Row of its most entrenched drug dealers. He says his Central City Recovery Zone has worked, but dealers still proliferate. 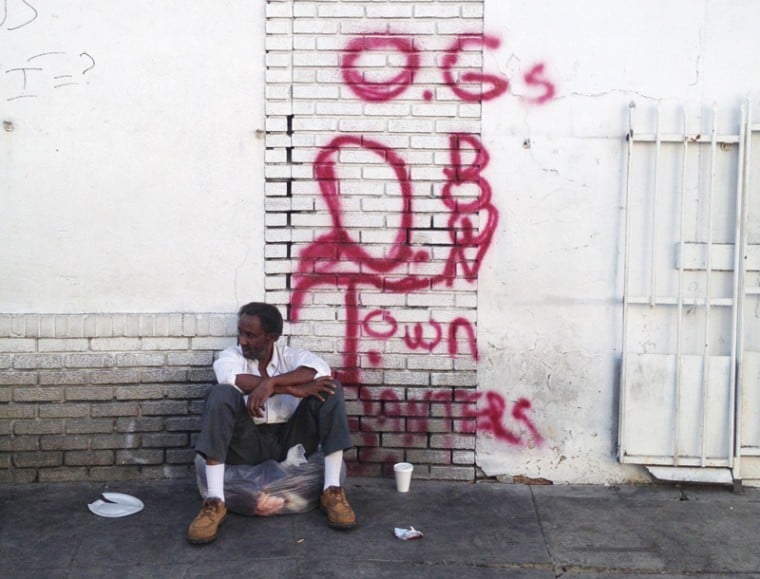 In Skid Row, the usual gang divisions and battles do not exist. Bloods and Crips align as Downtown Gangsters, or DTGs. 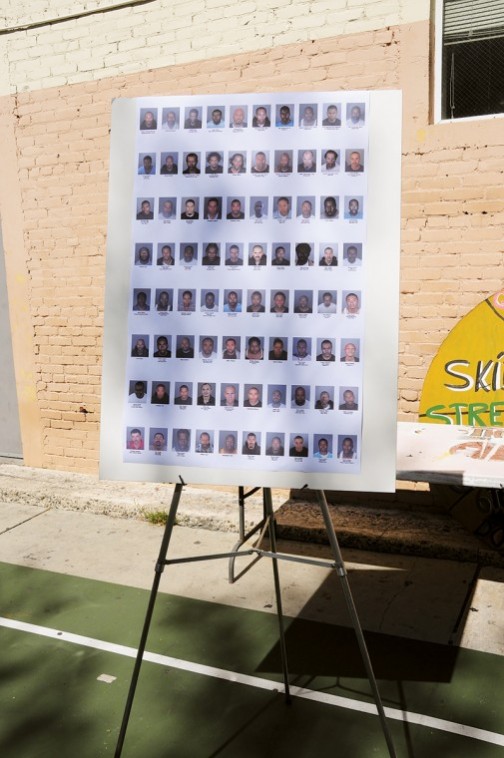 A poster displayed at the April 2010 press conference when Trutanich announced that dozens of people would be affected by an injunction keeping them out of Skid Row.

Carmen Trutanich wants to rid Skid Row of its most entrenched drug dealers. He says his Central City Recovery Zone has worked, but dealers still proliferate.

In Skid Row, the usual gang divisions and battles do not exist. Bloods and Crips align as Downtown Gangsters, or DTGs.

A poster displayed at the April 2010 press conference when Trutanich announced that dozens of people would be affected by an injunction keeping them out of Skid Row.

DOWNTOWN LOS ANGELES - When City Attorney Carmen Trutanich set out in April 2010 to rid Skid Row of its most entrenched drug dealers, he knew it would be difficult. More than 18 months later, it's clear his groundbreaking plan faces even steeper challenges than expected.

When he decided to tackle the Skid Row drug problem, he ordered deputies to devise a legal strategy to keep dealers out of the neighborhood. He gave them two months to bang out something enforceable.

Instead, they confronted a slow-moving legal system: It took a year for a judge to fully approve the plan, an injunction that identifies 78 individuals with multiple drug sale convictions, and makes it a crime for them to be in Skid Row. It took another three months to train local police to enforce it.

During that time, the problem has become worse.

There are now approximately 1,600, about 80% more people sleeping on Skid Row sidewalks than there were the day Trutanich announced the proposed Central City Recovery Zone. There are more parolees in the area too, and the recent shift in state inmate release guidelines is expected to keep more drug offenders on the streets longer.

"You can only assume that on a pro rata share, there are going to be more drug dealers, because the market's gotten bigger," Trutanich said during a recent afternoon in his eighth floor office in City Hall East.

Police only started enforcing the injunction in September, so it's too early to score its full impact. The 78 dealers identified must be served with papers in person before police can enforce it. So far, a specially trained LAPD Central Division unit has only been able to track down and serve three individuals. Two of them were later seen in the area and arrested, said Lt. Shannon Paulsen.

Violating the injunction is a misdemeanor, however, and overcrowded prisons and jails mean that non-violent offenders won't likely spend much time behind bars. One of the two individuals arrested for being in the Recovery Zone was released from custody in less than 24 hours. The other remains in custody on a parole hold for an unrelated case.

Still, the fact that Skid Row cops can't find most of the defendants is evidence to some that the injunction, even in its infancy, is already working - if authorities can't locate the dealers, it means they're not in the area.

"Right now the injunction is a 100% success," Trutanich said. "It did exactly what we wanted it to do. It chased out the known drug dealers."

Trutanich knows that success has an asterisk. Even if the dealers never again set foot in the neighborhood, others quickly take their place on the block. It's the Skid Row hydra rule: Eliminate one dealer and two more take his or her place.

"What we have now is another problem, which is some other jerk is coming in behind them and filling in the gap," Trutanich said. "It's like that game where you knock one down, and another one pops up. What do they call it? Whack-a-Mole."

The Central City Recovery Zone encompasses a nearly square mile patch of streets in Skid Row and a few blocks of the Historic Core. The name stems from its core objective - to make Skid Row a safer, more viable place to go for recovery from addiction and other ailments.

From a legal standpoint, it is a novel and extreme experiment. Injunctions have become a common strategy for attacking gang activity. Usually, they forbid certain behaviors in specific areas. The Skid Row injunction is different in that it bars select individuals from actually stepping foot in a small slice of Los Angeles, no matter the circumstances.

While the 78 people targeted by the injunction may be gone, there's little evidence that there is less crack, heroin and other drugs in the area. Street deals are easy to spot in Skid Row. When police aren't around, addicts smoke crack openly in certain stretches of the poverty-laden neighborhood, especially along San Julian Street between Fifth and Seventh streets.

Though the brazen street party would seem to present easy targets for police, the drug trade is in fact a complex operation that relies on a chain of lookouts along certain blocks who alert their colleagues to keep narcotics out of sight when authorities approach.

On a recent weekday afternoon at about 3 p.m., three people lounged on a sidewalk on San Julian Street. A woman sat on a crate and leaned against a stuffed shopping cart. Two men straddled backless office chairs. They appeared homeless, but they were doing brisk business as drug sellers.

One of the men made little effort to shield himself as he cut hard cocaine into several rocks. Over a 15-minute period, four people approached. There were handshakes and exchanges, and usually the buyer wasted no time, holding a lighter to a pipe for about 10 seconds and getting high in broad daylight.

While the dealers come mostly from other parts of Los Angeles, some of them are indeed homeless and live in Skid Row. According to LAPD Senior Lead Officer Deon Joseph, who is in charge of policing the section of Skid Row that includes San Julian Street, homeless addicts sometimes work as lookouts for low- and mid-level dealers. Their employers, for the most part, are rival gang members who in Skid Row unite under the local syndicate the Downtown Gangsters, or DTGs.

"That's why it's so hard to get one of those big dealers," Joseph said, "because the DTGs use these homeless folks and it takes one of them basically telling us what's happening for us to get the bigger guy."

In September 2006, the LAPD launched the Safer Cities Initiative, a 50-officer unit assigned to crack down on low-level crimes in Skid Row. Tough stances on misdemeanors such as jaywalking and littering sparked criticism from some who likened SCI to the criminalization of homelessness.

By most statistical measures, Skid Row is safer today than it was five years ago. Violent crime in the area dropped 30% in the first year. The 27 street deaths - those found dead in public due to exposure, illness or overdose - recorded in 2005 fell to 13 four years later.

The homeless population dropped significantly too, from about 1,900 in September 2006 to 500 in April 2009. Several factors, however, have started to reverse that trend. This September, police counted approximately 1,600 people sleeping on Skid Row sidewalks.

At the same time, shelters and social service providers are operating with diminished budgets, and crime, while down significantly from 2006 levels, is starting to creep back up. Two weeks ago, 19 serious crimes (10 of them violent) were reported during a seven-day stretch in Skid Row. Six years ago that would have been considered low, but after a few years of the Safer Cities Initiative, the LAPD was regularly tracking 10 or fewer serious crimes per week, Joseph said.

"We got our butts kicked that week," Joseph said. "And I think it's just a harbinger of things to come."

Orlando Ward, director of community affairs for the Veterans of America, which operates a drop-in center on the 600 block of San Julian Street, supported the Recovery Zone injunction when it was announced. He still does, although he has little confidence that it will make a major dent in the drug trade.

"I don't think there's going to be a huge effect on the ground level," Ward said. "Symbolically, it's a great thing. But as long as you have the consumers there that can create really a whole black market kind of economy that fuels this thing, it's not going anywhere."

Trutanich said the injunction's impact may not be known for years. Working with the LAPD, his office plans to add more individuals to the injunction list as additional people are convicted of sale crimes. That, however, will take time. City Attorney officials said that for efficiency's sake, they will wait until they have about 50 new individuals before they go back to the judge. While it is uncertain when they'll add to the list, once they do, officials expect the process to move faster.

Trutanich said that even then, the problems in Skid Row are numerous, complex and won't be solved with even the most novel strategies. Like many before him who have tried to improve Skid Row, he's come to the conclusion that real change will require a collective political will that devotes more resources to housing, rehabilitation services, street cleaning and law enforcement, and all at once.

At the moment, he said, that will doesn't exist.

Five years after the launch of the Safer Cities Initiative, Skid Row has seen reductions in crime, homelessness and nonviolent street deaths. By most measures, the community is cleaner and safer, with more housing. Today, that progress is in jeopardy. In a three-part series, Los Angeles Downtown News looks at the state of Skid Row as it faces a new set of challenges.

Nov. 7: A prisoner realignment program has some fearing that more drug offenders and felons will wind up on the street.

Nov. 14: A recent court order that prohibits the seizure of homeless peoples’ property on Skid Row sidewalks has had other consequences.

This week: In April 2010, the City Attorney tried a new tactic to combat the Skid Row drug trade. As police begin to enforce it, the drug game is alive and well.