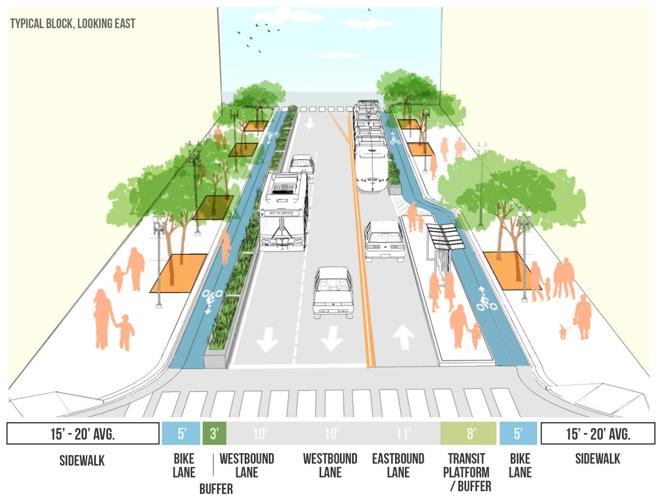 The most significant plan would create cycle tracks, or bike lanes with a physical barrier, and transit platforms and widen the sidewalk. 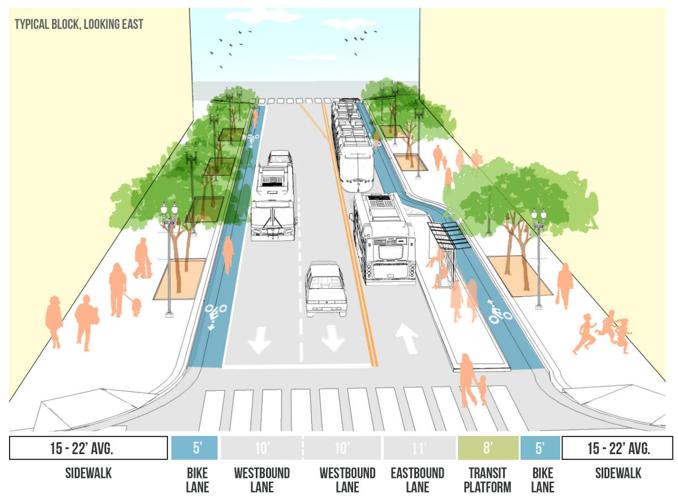 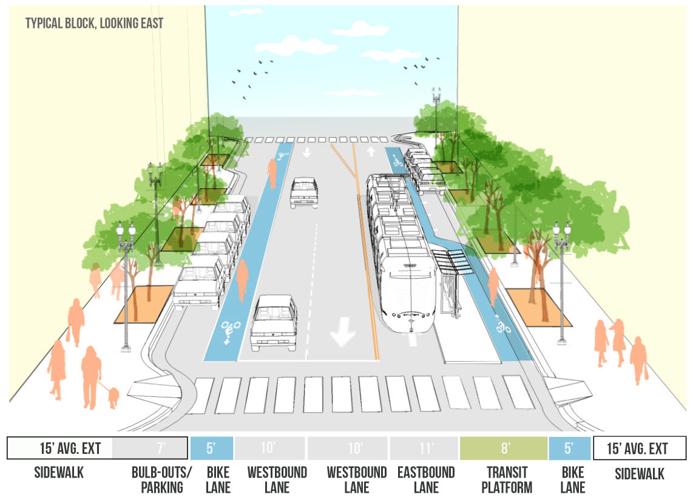 The most significant plan would create cycle tracks, or bike lanes with a physical barrier, and transit platforms and widen the sidewalk.

Seventh Street is one of Downtown’s busiest corridors, thanks to the convergence of the Metro rail station at Flower Street, numerous retail and dining options, and a huge number of offices.

The activity on the sidewalks and the street will only continue to boom as two giant projects take shape. The Ratkovich Company’s $180 million The Bloc, a reinvention of an aging retail, office and hotel complex at Seventh and Flower streets, is slated to finish in the fall. Meanwhile, Hanjin International is building the $1 billion replacement for the Wilshire Grand Hotel. When it opens in 2017, the structure on the northwest corner of Seventh and Figueroa streets will have 900 hotel rooms and 400,000 square feet of office space. At 73 stories and with a sloping roof, it will be the tallest building west of the Mississippi.

That makes this a prime time for the city to plan for the future of Seventh Street, and the Department of City Planning is doing just that. With $9.175 million from Hanjin as part of the Wilshire Grand replacement’s community benefits package, the department is diving into an effort to make the street more useful and attractive to pedestrians, cyclists and transit users. The project would affect Seventh Street mainly between Figueroa and Olive streets, with additional work on the connections to City West on Seventh Street and Wilshire Boulevard.

The project is still in the design phase, but features could include protected bike lanes, widened sidewalks, dedicated transit platforms for bus and streetcar riders, new landscaping and more.

“We’re taking advantage of the Wilshire Grand’s construction with the timing,” said City Planner Nicholas Maricich, who is overseeing the effort for the city. “There are efficiencies here because they already have to do streetscape improvements around their site. We’re getting more bang for the buck rather than doing the work via a bid.”

Currently, Seventh Street features a total of three driving lanes,with two westbound lanes and one for eastbound drivers. These are sandwiched between two un-buffered bike lanes, as well as parking/loading lanes along the curb.

Initial designs show three improvement “packages,” though Maricich noted the features in the different plans could be mixed and matched. The first option involves creating round sidewalk extensions at intersections to shorten crosswalks, along with transit platform “islands.”

A second plan suggests extending sidewalks from the current 15 feet to 22 feet, with the elimination of street parking and loading lanes in addition to the creation oftransit platforms.

A third plan would involve a sidewalk extension to 20 feet. It would also add transit platforms and bike lanes protected from car traffic by a three-foot-wide landscaping barrier.

Initial reactions to the plans have been positive, and stakeholders are open to the idea of cutting street parking and loading in favor of widening sidewalks, Maricich said. He noted, however, that such work would likely be the most expensive option, as sidewalk renovations can trigger costly underground utility relocations. He said City Planning does not expect to be able to afford every proposed feature.

Carol Schatz, president and CEO of the Downtown Center Business Improvement District and the Central City Association, called the plan a big step toward making this part of Seventh Street a signature district in Downtown. She noted that the effort would help reverse the decimation of businesses on the corridor that took place in the 1990s with the construction of the Red Line and then the recession.

“Anything we can do to make this an iconic retail and hospitality street is great, and making it more walkable will certainly add to that,” Schatz said.

A presentation of the ideas on Jan. 27 to area stakeholders also showcased landscaping, bike racks, and new wayfinding signage. Another possibility is the implementation of “pedestrian scrambles,” or diagonal crosswalks that allow everyone to cross at the same time. That would help reduce conflicts between turning cars and people crossing the street, said Mark Geragos, a lawyer and owner of the Fine Arts Building at 811 W. Seventh St.

“It’s been a huge success in Pasadena, and it’s something I’ve wanted to see for some time,” Geragos said. “But this work in general could be a great thing, especially if it’s anything like what’s happening along Spring Street and Broadway.”

Construction would cost $5 million-$5.5 million, with the rest of the money going to the planning and permitting process. Maricich said the Department of City Planning hopes to finish the design within six weeks, then delve into permits in the second half of the year. Construction would probably begin in late 2016, he said.

It remains unclear how long construction would take, as the city has yet to decide between tackling the renovation block-by-block versus all at once, Maricich said.

Either way, the changes will have a lasting impact on street life, said Clare De Briere, chief operating officer at The Ratkovich Company. The developer had always planned major streetscape improvements around The Bloc, but the overall effort brings a coherent and cohesive plan that pushes Downtown toward a more pedestrian future.

“The easier it is for people to get around other than their private car, the better,” De Briere said. “We have a huge parking lot at The Bloc, but the reality is, how do we make the neighborhood more efficient for people who are already in Downtown?

There are some concerns about the project. Eric Bruins, director of planning and policy at the L.A. County Bicycle Coalition, expressed optimism for the overall plan, but said the city should review how a mix of bikes, buses, cars and potentially a streetcar on a congested road could become more problematic. Kerry Moy, who is a co-owner of Seventh Street’s Wokcano and 3rd Generation restaurants, also expressed support for the plan, but said it doesn’t address his chief concern about the corridor: how the number of homeless people and panhandlers on the sidewalk impacts businesses and pedestrians.

Those and other issues can be discussed at upcoming public meetings about the project. The next is expected in early April, Maricich said.