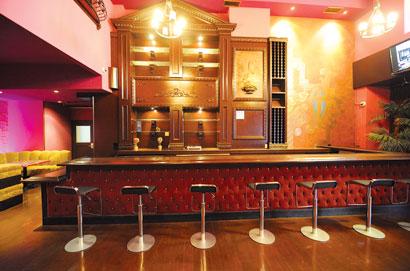 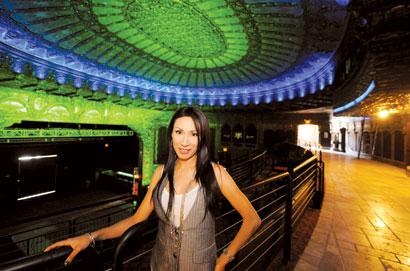 Christina and John Kim have spent $10 million restoring the 1926 Belasco Theater on Hill Street. It is set to open in the fall. Photo by Gary Leonard.
1 of 2

Christina and John Kim have spent $10 million restoring the 1926 Belasco Theater on Hill Street. It is set to open in the fall. Photo by Gary Leonard.

DOWNTOWN LOS ANGELES - The iconic Mayan Theater, on Hill Street between Olympic Boulevard and 11th Street, has long enjoyed an entertainment monopoly on its block. But soon, the venue that is home to Lucha Vavoom and some of the most popular salsa dancing events in Los Angeles will have to share.

Husband and wife team John and Christina Kim have been quietly restoring the neighboring Belasco Theater, putting about $10 million worth of improvements into the venue in the two years since they secured a long-term lease from owner Mehdi Bolour. Last month the Kims finally won city approval to sell alcohol and have dancing in the four-story structure, paving the way for a fall opening.

While navigating the approval process, the Kims have been busy building out two restaurant spaces, restoring the main theater and a separate ballroom, and setting up a space for a wine bar. The theater has hosted private events for filming and religious services, but has otherwise been closed to the public for years. All that remains now is fire department sign-offs and final permit inspections.

“We envision this as a multi-purpose entertainment venue,” said Belasco spokeswoman Sharon Dominguez.

The project was initially approved in June by a city zoning administrator, but the Mayan appealed the decision. The Planning Commission unanimously denied the appeal on July 28.

Mayan representatives claimed that the Belasco would bring in too much traffic and would be a late-night nuisance for nearby residents, now and in the future as the area’s residential population takes deeper root. Mayan officials told the commission they feared that too much noise would eventually draw neighbor complaints that would jeopardize both sites.

“This isn’t about competition,” Mayan lawyer Steve Catalano said. “This is about survival.”

The Los Angeles Police Department echoed concerns that the neighborhood can’t handle another nightlife spot next to the already busy Mayan, and Central Area’s vice unit opposed the project.

“The bottom line is the Belasco, like the Mayan, is going to be a very big venue and by the time the [zoning administrator] hearing came around, I certainly didn’t feel comfortable dropping another venue of that size in that area,” said Commander Blake Chow, who was the Central Area Commanding Officer at the time LAPD registered its opposition.

The commission ultimately sided with the Belasco and its supporters, among them the Historic Downtown Business Improvement District and the Los Angeles Historic Theater Foundation. The groups argued that the Belasco would have no greater impact than what it was originally developed to handle in the 1920s.

LAPD officials worked extensively with the theater operators on what land use consultant Elizabeth Peterson, who shepherded the Belasco through the approval process, called one of the “most extensive security plans ever.” Chow said the department’s concerns have been partially eased by a bevy of conditions attached to the alcohol permit that aim to restrict activities that could lead to public safety issues.

“The process here will be for the vice unit to work with the owners to make sure everything runs smooth and they’re ready to do that,” Chow said.

Built by Edward Doheny in 1926 — one year before the Mayan — as a drama house, the Belasco was designed by architecture firm Morgan, Walls and Clements. The original theater, with its ornate proscenium, dome ceiling and balcony seating, is a blend of Spanish Renaissance, gothic and Churrigueresque styles.

The building evolved over the decades, functioning for a time as a vaudeville venue and later housing different churches. In the 1970s it was bought from the Immanuel Gospel Temple by the Metro Community Church, an early gay and lesbian church in Los Angeles, Dominguez said. An old sign erected by one of the churches is still at the site. It reads, “Prayer Changes Things.”

Now, the Kims are changing things again, re-positioning the restored venue as a space that could theoretically host several separate events for different ticket holders on the same night.

A wine bar dubbed 10 Fifty (the theater is at 1050 S. Hill St.) will front Hill Street and is planned to operate daily. In addition to the theater, which will host live entertainment, there is an upstairs ballroom, a basement lounge space envisioned as a jazz club, two restaurant spaces and two outdoor patios.

The Kims plan to manage all of the operations in-house, Dominguez said. The restaurants, one of which will occupy the corner space at 11th and Hill streets and specialize in seafood, will open after the rest of the theater, in a second and final phase, she said.

At first, the Kims sought to buy the building from owner Bolour. The two sides couldn’t agree on terms of a sale and instead negotiated the lease. John Kim, who has developed multi-purpose entertainment spaces in Koreatown, hasn’t only opened his pockets — he’s getting his hands dirty too, helping with various jobs around the theater. During a meeting last week, a tired and sweating Kim, white paint flecked on his clothes, talked eagerly about his venture.

“When I first saw this place, I thought there is nothing like it,” said Kim. “It made by heart go boom, boom, boom. And I thought, this is it.”