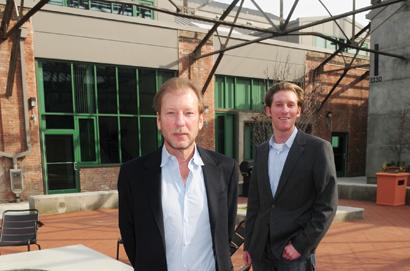 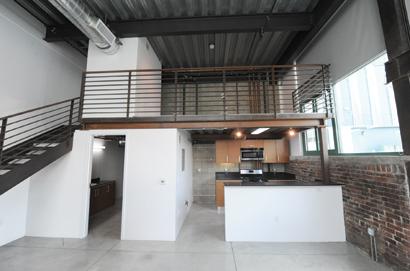 DOWNTOWN LOS ANGELES - For a project located in a generally industrial area, the Factory Place Arts Complex has an unusual feel — it is almost suburban.

The fenced-in complex near the corner of Alameda Street and Factory Place in the Arts District feels comfortably isolated and quiet. Once inside the walls, one can hear the sounds of the city, but there is no traffic bustling directly outside the building, and finding a parking spot is a cinch. Some tenants may even be able to see their car from their windows.

It’s also a place where people will likely get to know their neighbors, and thanks to extensive windows, possibly get a sense of their tastes in furniture.

“We have the feeling of open space,” said Howard Klein, owner of HBK Investments, the $10 million project’s developer. “We have the views of Downtown, ample parking, no congestion, and it’s a dead-end street so we really can control our environment.”

The project transformed a row of brick, early 20th century warehouses and created a sort of gated community in Downtown. Forty-one residences are concentrated in a pair of two-story buildings and courtyards known as 1330 East, and 10 loft spaces are in the portion known as 1330 West. The project includes a cavernous, 9,000-square-foot space for community events.

The development is vastly different than most of the other new housing complexes in Downtown Los Angeles. That makes it exactly what some people want.

“We were looking for a little less city, but still in the city,” said Jeff Dye, who moved into Factory Place Arts Complex with his girlfriend about a month ago. “This feels hidden, like our own little compound, like the suburbs in the city.”

The residences range from 693-2,000 square feet, with rents from $1,350-$4,500. Most apartments feature exposed wooden ceilings and rustic steel beams. Some units contain balconies.

It’s a striking turnaround for a property that in the 1920s was used by the Department of Water and Power to build water meters. Now, Klein hopes to establish a community where interaction between tenants is spurred by courtyards that include barbecues, fire pits and a pool.

From Sixth Street, the residential complex is easy to miss, as the portion of the project fronting the road is actually the back wall of the housing units.

“Most people would never even guess people live here,” Dye said. “It’s part of what we liked about it.”

The entrance is off of Factory Place (just east of Alameda Street) and feeds into a parking lot with 275 spaces. The lofts themselves have framed glass doors and are surrounded by windows, giving an appearance of storefronts rather than homes. Some have blinds and shades that can be drawn, but tenants such as Dye so far have a wide-open view.

“We love it. So much light comes in and we’re getting curtains so when we want it to be private it will, and when we don’t it wont,” he said.

Losing a bit of privacy is worth the rewards, Klein added. Those include views of the tranquil courtyards decorated with terra cotta pots from Tuscany, a touch insisted on by Klein’s wife Deborah, an avid gardener who was in charge of the landscaping.

There is about a half-acre of open space in the complex, thanks to the courtyards, Klein said. Tying the buildings together are the skeletal remains of old structures that were mostly torn down. The project was designed by Seattle-based Tony Bell.

“Basically if you’re on Sixth Street, there was one long façade that was all one building,” Bell said. “We cut it up, and we cut part of the building out in two different places to make two separate courtyards.”

Above the open spaces between the buildings is a web of metal beams left over from that procedure. They have a particular intent, said Bell.

“The courtyards give the feeling of a campus,” he said. “People have the ability to meet, congregate, enjoy themselves, barbecue, swim outside and still be within the walls of the complex.”

While the buildings date back nearly a century, the complex contains some new elements. Two commercial units, one 1,600 and the other 1,300 square feet, will become retail space. The exact uses have yet to be determined, said Klein.

“We’re really kind of feeling our way with the complex before we make a decision,” he said. “It’s quite possible that the buildings we envisioned as retail could in fact turn into some sort of office use as well.”

The Factory Place Lofts is actually the second phase of the project. The first installment, known as 1308 Factory Place, also developed by Klein, opened in 1982.

A third segment is in the planning stage, though ideas are still being kicked around. Klein had originally intended to turn a three-story, 55,000-square-foot building on the property into 45 lofts. Now, he said, he is looking at possibilities such as commercial space or some sort of small, creative types of manufacturing.

“We’re going to be very selective in the tenants we bring in, and when I say manufacturing, for example, we’re talking to an artist who does welding, leather work and furniture design,” he said. “We’re talking creative uses and we’re going to have real working artists here.”

Meanwhile, Dye said he sees his new neighborhood as an oasis in Downtown, and depending on what commercial tenants they bring in, he may be spending most of his time within the Factory Place gates.

“We can have barbecues here, hang out with neighbors, and hopefully they’ll give us more reasons not to leave,” he said.