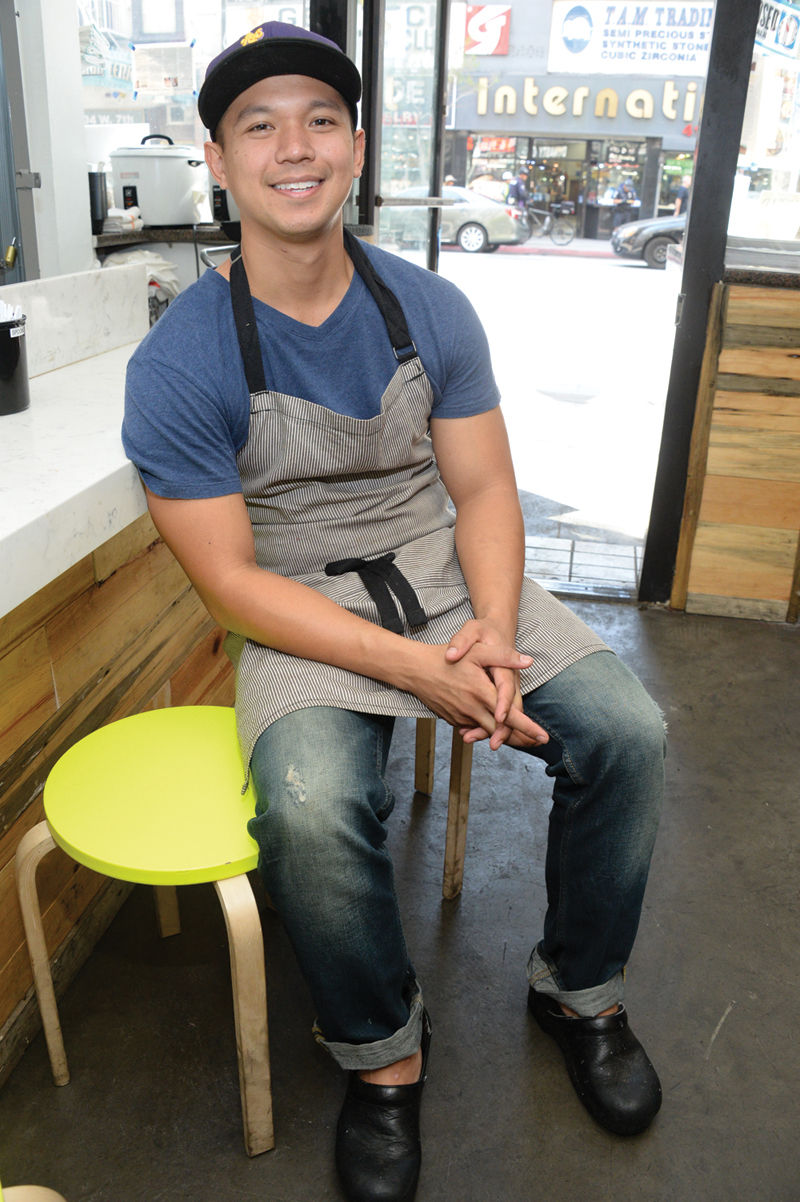 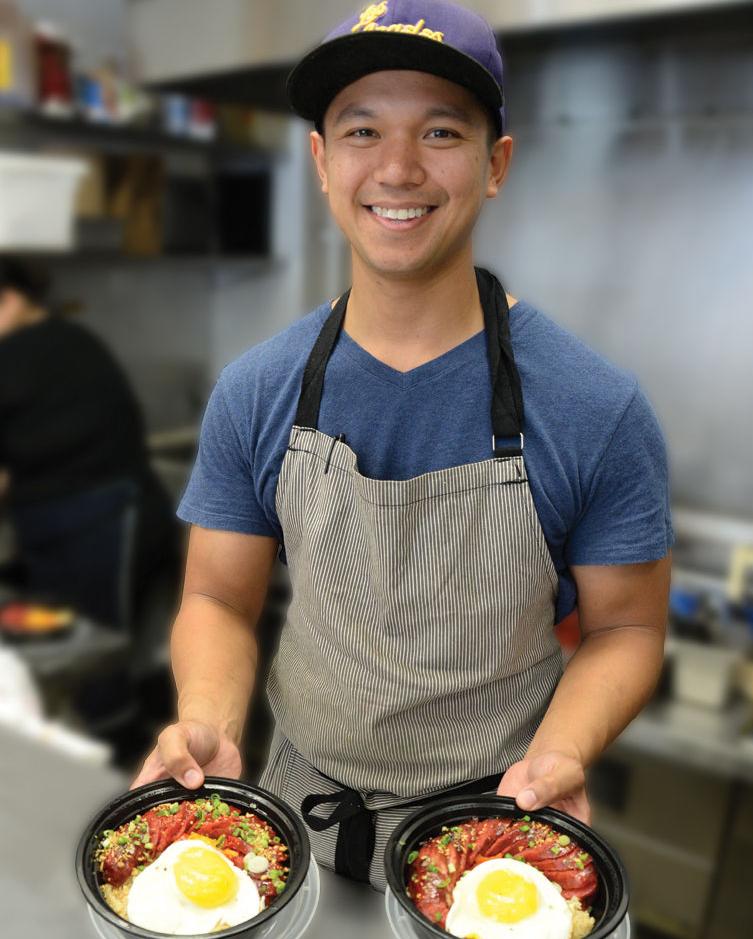 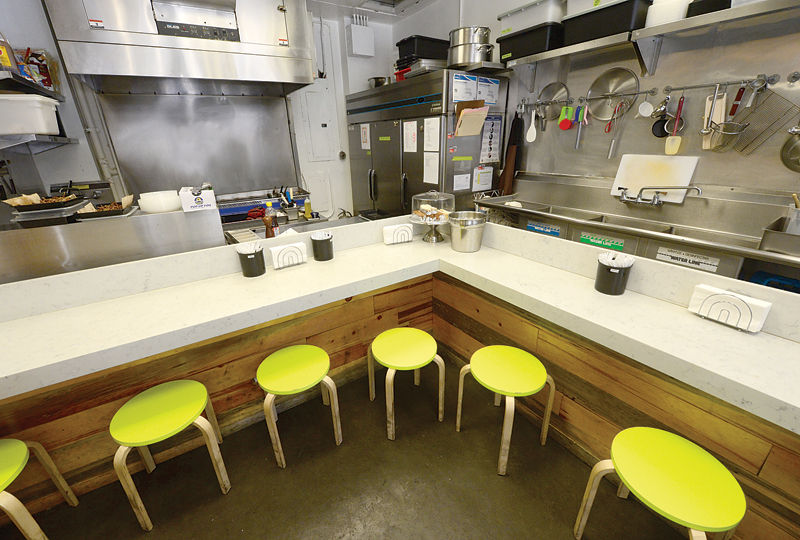 The 275-square-foot Ricebar specializes in dishes with heirloom rice varietals from the Philippines, where Olalia was born and raised.

The 275-square-foot Ricebar specializes in dishes with heirloom rice varietals from the Philippines, where Olalia was born and raised.

DOWNTOWN LOS ANGELES - Charles Olalia’s last job in Downtown Los Angeles was, arguably, the most prestigious culinary position in the Central City. He held court as executive chef at Patina, the acclaimed Cal-French restaurant in the Walt Disney Concert Hall. He oversaw about a dozen staffers and worked long shifts doing everything from supervising his cooks to brainstorming $150 tasting menus to logging inventory and finances.

His current digs couldn’t be more different. Ricebar, which Olalia opened two months ago with a partner in the Jewelry District, is just 275 square feet, about the size of a modest bedroom (that’s the entire restaurant, not the kitchen). The fare is far simpler than the complex meals he served at Patina, and the L-shaped kitchen accommodates about three or four people at a time. Ricebar only serves from 11 a.m.-5 p.m. on weekdays, with a short Saturday lunch period coming soon.

“This is a chance to do something completely different,” he said one evening last week. “I’m not trying to do a Filipino food revolution, or anything, but this is food that makes me really happy.”

Ricebar, tucked into a sign-less space at 419 W. Seventh St., is easy to miss. But don’t be fooled by the humble digs or the plastic utensils: Ricebar is as rewarding a culinary experience as exists in L.A. today.

Growing up in his native Philippines, rice served as a daily staple for Olalia. Today, the 32-year-old resident of the Historic Core is reinventing the rice bowl, escorting diners to Filipino cuisine with a barrage of addictive flavors.

The fragrant rice alone may be a revelation for anyone accustomed to bland and improperly cooked grains. Olalia uses four rice varietals, with names like Tinowan Fancy and Kalinga Unoy, that offer unique flavors and textures. Some are earthy and chewy. Others have a mellow sweetness and a softer texture.

“I never ate this kind of rice in the Philippines. If you could just eat jasmine rice, that showed you had kind of made it,” said Olalia, who gets his rice directly from the Philippines.

His bowls, which run about $9, come topped with Filipino specialties like Bistek Tagalog, pan-seared steak that’s been marinated in soy sauce, and chicken Tinola, with the bird slowly simmered in a ginger-laced broth. The menu’s inspiration comes from the dishes Olalia ate growing up, prepared from scratch by a family cook.

From Medicine to Cooking

While the concept has a sharp focus, Ricebar was born basically on a whim. A few years ago, Olalia met Santos Uy, who owns Downtown’s Mignon and a Hollywood eatery, Papilles Bistro. They soon bonded over a love of the restaurant industry and CrossFit workouts. Earlier this year, Uy was strolling along Seventh Street when he spotted a tiny, shuttered restaurant space. He immediately wanted Olalia involved.

“A guy from his kind of background is going to be hesitant, but I signed the lease anyway and I told Charles, ‘Here’s the key if you want it,’” Uy said. “At first he just wanted to help and consult. His wife convinced Charles that he’d end up going all-in anyway, and might as well be a partner.”

That move mirrors how Olalia became a chef in the first place. He graduated from the University of Santo Tomas in Manila with a biology degree in 2004. He planned to follow in the footsteps of his parents, both doctors, and his six siblings — four doctors, two nurses.

The summer before medical school started, Olalia realized just how badly he wanted to take his mind off science. He decided to learn to cook, and signed up for a one-year program at a local culinary academy.

[A Food Revolution in Chinatown]

Olalia soon came to an unnerving realization: He liked to cook. A lot. He also enjoyed the idea of doing something different from the rest of his family.

“My mom was supportive, but scared. My dad was disappointed at first. It’s hard for parents to accept something they don’t understand. They had no idea what the hospitality industry was like,” Olalia said. “They didn’t know what it would be like for me to live on a cook’s salary. And it was hard.”

Olalia graduated and landed his first kitchen job at the Ritz-Carlton at Half Moon Bay in San Francisco. He would do time in star-caliber restaurants like Restaurant Guy Savoy in Las Vegas, The French Laundry in Napa Valley and Coi in San Francisco. He even landed a corporate gig cooking for Silicon Valley giant Oracle.

In 2010, Olalia was recruited to Patina, where he started as sous chef, or second in command to the executive chef. He worked under Tony Esnault, a Frenchman who had earned his bones in some of the most demanding kitchens in the world.

“Charles had a very open mind. He had a good attitude to start. It’s basic, but young cooks and chefs, sometimes they think they know a lot when they don’t,” said Esnault, today the executive chef at the Arts District’s Church & State. “Over time, I grew to have a lot of confidence with him in the kitchen.”

Esnault left in 2012. He and Patina Group head Joachim Splichal wanted Olalia to take over the kitchen. It was a daunting offer. “That was a [expletive]-my-pants moment,” Olalia said.

Still, he took the job, and stayed for a year, until signing on at mar’sel in the Palos Verdes resort Terranea. It turned out to be a bad experience. Olalia missed being in Downtown, and never got comfortable with how the resort was run.

Ricebar offered Olalia not only the opportunity to return to Downtown, but to dive into unfussy cooking while having a stake in his own business. Yet it’s not Olalia’s only outlet. He runs A’postrophe, a pop-up series that shows off refined takes on Filipino flavors and ingredients. The dinners have taken place in numerous Downtown lofts.

Olalia sees it as a trial run for a more formal restaurant where diners would spend around $50 on a meal. He and Uy are also pondering a Ricebar franchise.

Is Olalia starting a new career as a restaurant magnate? Maybe. Then again, he learned a critical lesson from Esnault: A chef can, and ought to, make food every day.

Maybe that’s why every week, after Ricebar closes, Olalia mans the kitchen by himself to make 150 pounds of his beloved longanisa sausage, using an uncle’s recipe. It’s a job made easier by a few people, but the kitchen’s too cramped for anyone else to join him.