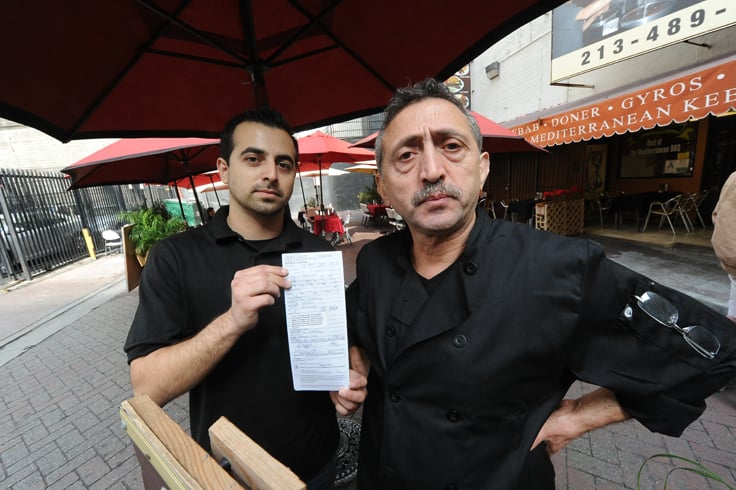 Bgos Miaramoglu, right, is among restaurant owners who fear the loss of outdoor tables will crush their business. His son, Sevan, holds the citation issued Tuesday. 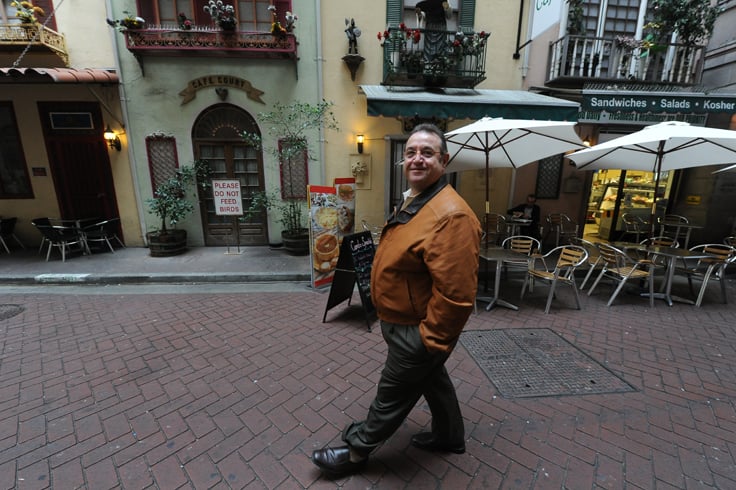 Peklar Pilavjian owns St. Vincent Jewelry Center. He has tried, but failed, to broker a deal that would legalize outdoor seating for St. Vincent Court eateries. 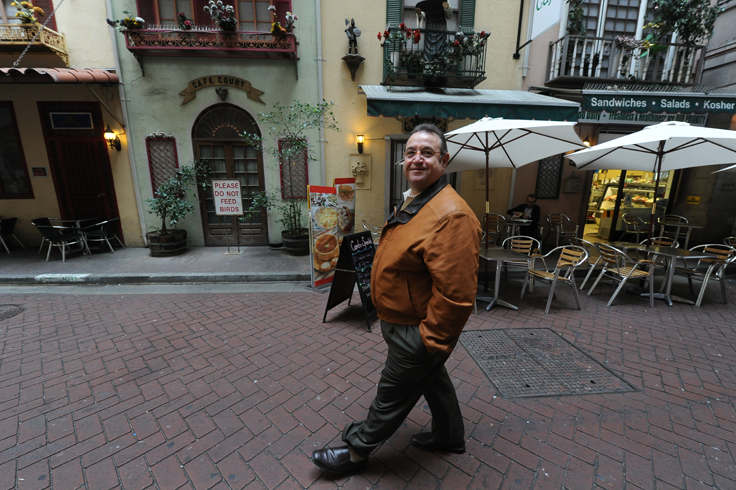 Bgos Miaramoglu, right, is among restaurant owners who fear the loss of outdoor tables will crush their business. His son, Sevan, holds the citation issued Tuesday.

Peklar Pilavjian owns St. Vincent Jewelry Center. He has tried, but failed, to broker a deal that would legalize outdoor seating for St. Vincent Court eateries.

DOWNTOWN LOS ANGELES - When sitting at an outdoor table in St. Vincent Court, the cafe-laden alley off Seventh Street in the Jewelry District, it takes only a glint of imagination to feel transported to old Europe.

On sunny days at lunch, the tables that line the slim sidewalk and the faux-brick street are packed with patrons of the dozen Middle Eastern and Mediterranean restaurants that open to the alley. In the afternoon, jewelry business workers take seats to sip espresso and smoke cigarettes.

It’s almost as if St. Vincent Court is a little secret in Downtown. But the better-kept secret about the open-air food court has been that the core of its character and the engine of its small businesses — the sea of outdoor seating — is illegal.

The city has long turned a blind eye to the unpermitted al fresco dining. That policy ended abruptly on Tuesday, when officials from the Bureau of Street Services dispensed notices ordering the merchants to remove their outdoor tables within 24 hours. Even the court’s longtime shoe-shiner was told to clear his stand. By Wednesday, the tables that were the trademark of the alley for more than a decade were gone.

That has put merchants like Bgos Miaramoglu, who opened the kebab restaurant Sevan Garden in the alley about 10 years ago, in a state of panic. While Sevan Garden has a sizable interior seating area, he believes that losing the outdoor tables will kill his business.

While the move may seem sudden, Tuesday actually marked the boiling point in a long simmering feud between St. Vincent Court property owners and the Delijani family, which owns the Los Angeles Theatre. The alley dead-ends at the theater’s rear loading doors and the outdoor tables obstruct daytime access for trucks carrying gear for everything from filming operations to rock concerts.

Shahram Delijani, whose father Ezat Delijani purchased the Los Angeles Theatre in 1987 at the request of then Mayor Tom Bradley to save it from the wrecking ball, said the merchants have cost his family millions of dollars in lost filming-related revenue over the past 10 years. The family long resisted filing a complaint and triggering the crackdown, he said, because they hoped to negotiate a compromise that would allow for outdoor tables and protect theater access.

After after a round of lengthy negotiations last summer failed to produce a compromise, Delijani recently filed a complaint, prompting the 24-hour notices issued Tuesday.

The 1931 theater is a popular filming location, but productions must rent an adjacent parking lot on Hill Street to store equipment and park trucks, instead of backing up to the loading area. Some productions ultimately film elsewhere to avoid the cost of renting the lot, Delijani said.

“This isn’t just about my family profiting from the theater, this is about activating the city’s namesake theater, the nationally registered historic landmark,” Delijani said. “When my dad purchased and maintained the theater at a huge expense, he would have never imagined that its future would potentially have been jeopardized because of some restaurants in an alley blocking access to our loading doors. It’s ludicrous.”

St. Vincent Jewelry Center owner Peklar Pilavjian, who counts seven of the alley merchants as his tenants, said he has made several attempts to legalize the outdoor seating.

Last year, he, Delijani and city officials, including a representative of Mayor Antonio Villaraigosa, tried but failed to broker a compromise. During negotiations, Delijani said he agreed in part to a proposal to widen the sidewalks in the alley from five to nine feet, leaving ample room for sidewalk dining. Pilavjian, who would have been responsible for most of the approximately $90,000 worth of work, supported the concept even though the street tables would have been eliminated.

But Delijani insisted that two spaces large enough to accommodate 72-foot-long trucks would have to be set aside exclusively for the theater. One of the proposed spaces is in front of a building owned by Pilavjian, who balked at the prospect of losing access to the parking slot.

That’s when talks broke down, said Pilavjian, who fully acknowledges that the outdoor dining conflicts with city code.

“I know I don’t have any legal recourse,” Pilavjian said. “I’m hoping to appeal to the fairness doctrine of our esteemed mayor to realize that the livelihoods of many people — and it’s not mine — are going to be lost.”

Those people include Kacin Celik, who opened Tulip Café in St. Vincent Court four years ago. The cafe has nine outdoor tables, some of which seat up to six people, and five smaller tables inside. On Tuesday at about 1 p.m., the patio was full. Not a single indoor table was occupied.

“This is my business’ heart,” said Celik, as he gestured to the patio, which was temporarily covered in a plastic enclosure warmed by heat lamps. “If I don’t have this I close the store. I sell it right away.”

Celik said he knew that the outdoor seating arrangement was a code violation when he opened his business. But after years of city tolerance, he never expected enforcement.

Huizar spokesman Rick Coca said there was no way to soften the blow on the merchants once Street Services was directed to enforce the code.

“We recognize the arguments on both sides and would really like to see an amicable solution,” Coca said. “When the dust settles after these actions, we would still hope that that’s possible.”

For now, Celik, Miaramoglu and other merchants will have to apply for conditional use permits to allow tables on the sidewalks in St. Vincent Court. Such permits are discretionary and could be denied.

Delijani rejected the notion that Pilavjian or the St. Vincent Court merchants are victims.

“I didn’t want it to come to this,” he said. “It’s a simple black and white issue: they’re illegal. They should have taken the deal that would have kept them there, but they weren’t willing to give me an inch.”

With the alley cleared, access to the theater may nevertheless face new challenges. While trucks can reach loading docks through the alley, parking for long stints will require permits.

Like the permits for sidewalk dining, production-related approvals are discretionary. FilmL.A., the nonprofit that coordinates film permits for the city, is required to reach out to businesses near the shoot location. When location managers visit St. Vincent Court to notify merchants of future productions and proposed truck parking, Pilavjian warned that they should expect to meet some disgruntled shopkeepers.

“These guys are going to make hell,” he said.