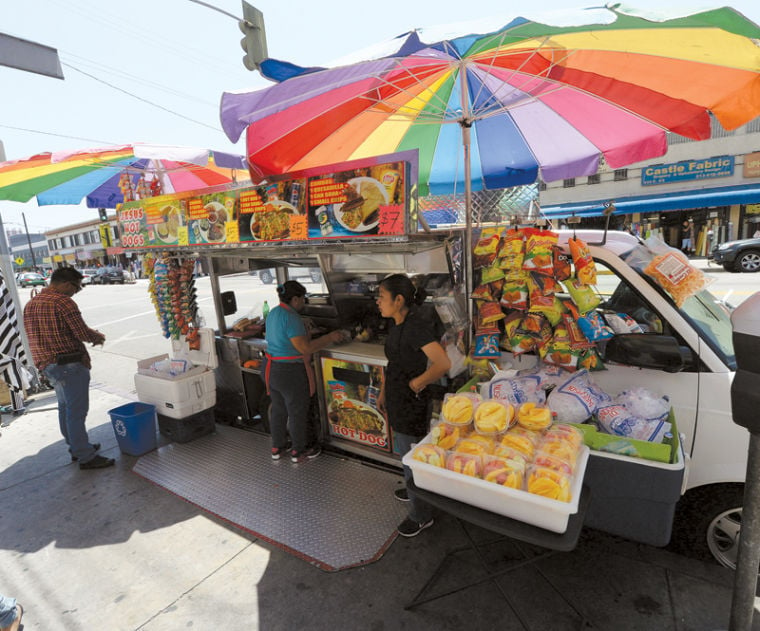 The city is examining ways to permit and regulate street venders. Though illegal, the practice, whether in the form of mobile hot dog carts or clothing sellers, is ubiquitous across Downtown. 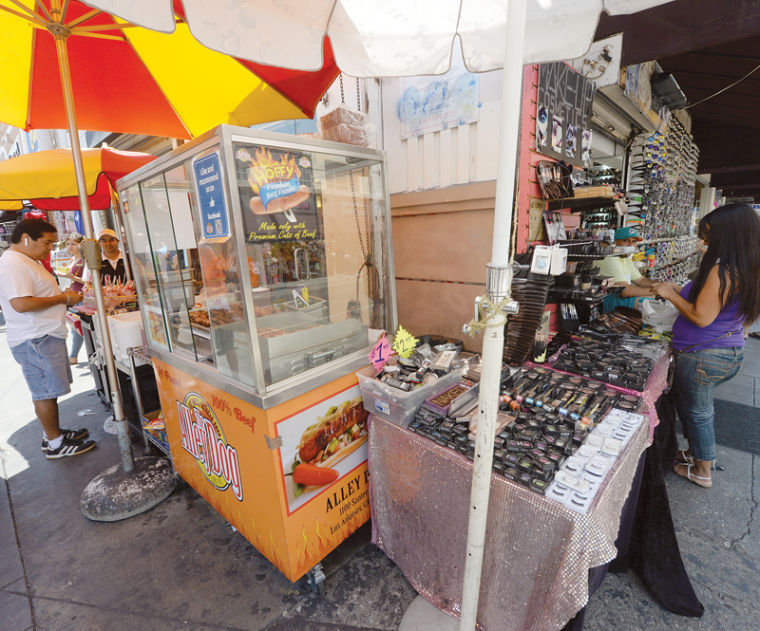 Advocates for street vending say the businesses contribute to the local economy. Some community and business stakeholders in Downtown, however, question the city’s ability to enforce new rules.

The city is examining ways to permit and regulate street venders. Though illegal, the practice, whether in the form of mobile hot dog carts or clothing sellers, is ubiquitous across Downtown.

Advocates for street vending say the businesses contribute to the local economy. Some community and business stakeholders in Downtown, however, question the city’s ability to enforce new rules.

DOWNTOWN LOS ANGELES — Street vending is illegal in Los Angeles. Yet as every Downtown worker or resident knows, it flourishes in the Central City, with hot dog sellers, clothing hawkers and more often popping up on sidewalks.

Now, a pair of City Council members has embarked on an effort to legalize and regulate the practice, arguing that doing so would bring vendors out of the shadows and allow them to contribute to the local economy. That, however, has sparked an outcry from some local business and community leaders, who worry that the move would hamper Downtown’s revitalization and harm brick-and-mortar businesses. They also believe the city simply can’t regulate a swell of newly empowered vendors.

“Downtown is a unique community, and sidewalk vending can get in the way of growing a neighborhood,” said Kent Smith, executive director of the Fashion District Business Improvement District. “If the city implements a new framework for street vending, that’s one thing. But where is it getting the resources to maintain it? I like the happy world of regulation, but I don’t think it’s the reality.”

The implications of street vending have been discussed for years, and in November 14th District City Councilman José Huizar and Ninth District rep Curren Price authored a motion to look at legalizing the practice. In May, the Chief Legislative Analyst’s office issued a seven-page preliminary report recommending Los Angeles adopt a citywide street vending program.

Although details are still being worked out, the early plan involves creating a regulatory structure with a slew of rules regarding where vendors can work, how many can operate on a block, how far they must be from storefront businesses, what fees they need to pay and more. No timeline for implementation has been revealed.

Huizar said government involvement is required because the status quo is unsustainable and hurts both storefront shops and vendors alike.

“The system we have right now, no matter where you stand on the debate, it’s broken and everyone needs a regulatory system,” Huizar said. “We need to allow vendors to sell their wares while putting mechanisms in place to protect brick-and-mortar businesses.”

Although street vending is ubiquitous in Downtown, it is most pronounced in the Fashion District, where dozens of mobile food carts and clothing and accessory vendors can set up shop on weekends. The Historic Core also sees numerous vendors, and South Park sidewalks swell when large events take place at Staples Center or L.A. Live.

While she says she understands the argument that vendors are just trying to earn a living, Blair Besten, executive director of the Historic Downtown Los Angeles Business Improvement District, said that they can create problems in a neighborhood. Sidewalk blockages caused by vendors can force pedestrians to walk in a street filled with cars, Besten said. She added that people have been burned by hot griddles on mobile food carts.

Unscrupulous vendors also leave behind piles of trash, she said. She recalled an incident in which a vendor dumped his hot dog water into an alley by the Flower Street Lofts, attracting a clan of hungry rats.

“We had to call our team to go clean that mess up,” Besten said. “It’s not fair for the businesses who are paying us for clean-and-safe crews to have to deal with these street vendors.”

This isn’t the first time the matter has come up. In 1994, the city adopted the Special Sidewalk Vending District Ordinance. That allowed the formation of vending districts in eight areas, including East Los Angeles and the Central City. It was largely a failure, however, as only one was ever established, at MacArthur Park, and it no longer exists.

The CLA report suggested that the ordinance failed because of an overly complicated district establishment process. Today, numerous difficulties remain, with vendors complaining that enforcement from the police department is confusing and arbitrary, with some vendors receiving warnings and others being arrested.

The CLA report was discussed at a packed May 13 hearing before the Council’s Economic Development Committee, on which Huizar sits. During several hours of testimony, those in favor of regulation charged that arrests have led to the deportation of undocumented immigrants. An LAPD representative pointed to other negative impacts, saying that the threat of punitive action makes some vendors wary of reporting robberies and attempts at extortion from local gangs, who will charge a “tax” when the mobile sellers set up in certain districts.

Confusion also arises because vendors can obtain city business tax registration and permits to serve food from the county Department of Public Health, said Isella Gracian, vice president of operations for the East Los Angeles Community Corporation, which is working with Huizar and Price on the topic.

“People go in to do the paperwork and pay for what seems to be all the right permits, and so you can imagine how shocked they are when LAPD comes and arrests them,” Gracian said.

Several people at the May 13 committee meeting said they turned to street vending after losing their job or as a way to get out of homelessness.

“With jobs, I’m discriminated against not for the color of my skin or my features, but my age,” testified Felice McGuinness, a vendor in Leimert Park. “But joining the ranks of homeless African Americans is not an option for me. I want to earn my way, and street vending has allowed me to stay afloat.”

Advocates for street vendors say they contribute to the economy and could do so on a greater scale with a proper system of registration and taxation. The view is shared by Price.

“We need to use all of our tools to promote the local economy,” Price said. “We shouldn’t overlook these micro-businesses, and we need to find a way to formalize this entrepreneurship, because it’s been going on for a long time in this city.”

That’s not very convincing to Downtown Los Angeles opponents of the current proposal, who see huge question marks over vendors’ accountability and their ability to benefit neighborhoods.

“We have concerns about how vendors will factor in terms of contributing to the BIDs or otherwise to keep our streets clean and safe, and what can be done to maintain distance from storefront businesses,” said Jessica Lall, executive director of the South Park Business Improvement District.

Huizar and Price have said that fees collected through a new permitting system could help pay for a dedicated police unit to deal with street vendors and fund additional resources for county and city agencies. Still, Smith, Besten and Lall are doubtful that a cash-strapped city would be able to enforce any new ordinance. The issue isn’t with legal vendors doing things right, Besten said. The worry is that illegal vendors will also flock to Downtown and will take advantage of lax enforcement.

“There’s no point if the cops come by once with a warning and don’t return for the rest of the day,” Besten said.

The Economic Development Committee will meet again in August to discuss the matter. At the same time, the office of the city Chief Administrative Officer will prepare another report, this one examining funding mechanisms and cost estimates of a citywide street vending program.