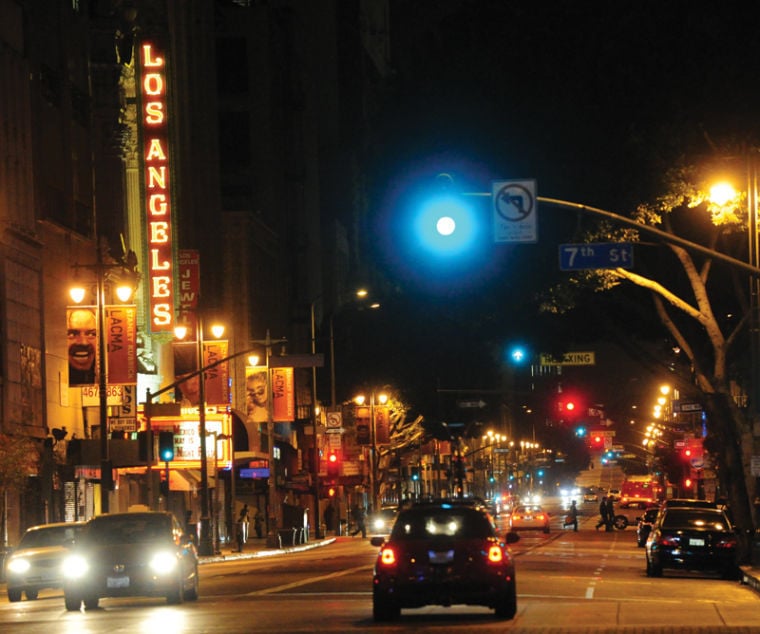 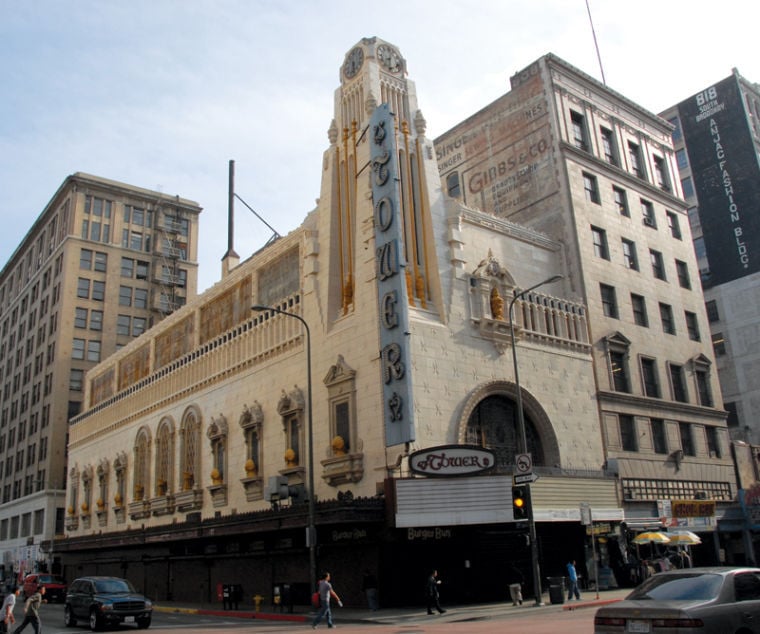 The Tower Theatre would get a 1,349-square-foot bar fronting Eighth Street with a patio covered by a glass façade.

The Tower Theatre would get a 1,349-square-foot bar fronting Eighth Street with a patio covered by a glass façade.

DOWNTOWN LOS ANGELES - A plan to reactivate four historic Broadway theaters is set to take a major step forward next week. If successful, it will be the starting point to the most important effort in years to bring nightlife to the corridor on a regular basis.

On June 6, representatives of the Delijani family will go before a city zoning administrator to ask for liquor and other permits for nearly a dozen proposed bars, restaurants and lounges at four Broadway theaters.

Shahram Delijani last year announced an initial effort to activate the Palace, Los Angeles, State and Tower theaters on a regular basis; currently, they are used sporadically for events such as concerts and movies. The proposal is tied in to City Councilman José Huizar’s Bringing Back Broadway initiative, and would follow additions to the street such as the Broadway Bar and the Los Angeles Brewing Company, as well as coming businesses including the Ace Hotel and Urban Outfitters.

The Delijanis are essentially trying to consolidate permits for all four venues into a single “theater complex,” even though they are blocks apart. If successful, it would make it easier to develop and market the properties to restaurant and bar owners.

“Now that the economy is coming back, the timing is right and they are really ready to proceed,” said Kate Bartolo, a land-use consultant working on the theaters with the Delijani family.

Shahram Delijani, who is spearheading the proposal, was not available for comment.

Plans for the theaters include creating a nightclub, several restaurants, bars and lounges. Bartolo said each venue would maintain its stage and main auditorium for live shows, films and other productions. Some would have DJs and live music. There would also be street level as well as rooftop patios.

“We want to make sure that each of these theaters has the flexibility to reflect modern theater and special events space usage,” she said.

At the 171,080-square-foot State Theater, plans call for opening two bars and a restaurant/lounge. The businesses would all operate separately in the basement, as a church has three years left on its lease for the ground floor. All of the spaces in the building at 703 S. Broadway would include a DJ booth and small dance floor.

In the 68,800-square-foot Palace Theatre, the Delijanis envision a ground-floor bar and a street-level and basement restaurant. The businesses in the building at 630 S. Broadway, which underwent a $1 million renovation in 2011, would both have outdoor patios.

Plans are more limited at the Tower Theatre at 802 S. Broadway. The 22,000-square-foot building, which is regularly used for filming, would get a 1,349-square-foot bar fronting Eighth Street. It would have an outdoor patio covered by a glass façade.

The most extensive plans are at the 103,884-square-foot Los Angeles Theatre, which is occasionally used for concerts and movie screenings as part of the annual Last Remaining Seats series. The venue at 615 S. Broadway would get two bars and two restaurants, all with outdoor patios.

The building would have a fifth space, a 3,100-square-foot second floor nightclub with bottle service. The ground floor entrance would be via the alley in St. Vincent Court.

That could prove troubling, as Delijani has been feuding with Peklar Pilavjian, owner of the St. Vincent Jewelry Center, over the restaurants and cafes in the alley. Delijani complained to the city this year about the tables and chairs that had long been set up outdoors — though against city code, they were tolerated for more than a decade. Delijani’s formal complaint sparked a crackdown and the removal of the seating.

Pilavjian said he has no plan to challenge the theater project during the June 6 hearing.

“It’s a free country and they can do whatever they want as long as they don’t park trucks there all day long,” said Pilavjian.

A transformation of the four theaters has long been seen as a key component in the effort to revive Broadway.

The family’s plan comes more than a quarter century after they took their first stake on the street. In 1987, the late Ezat Delijani bought the Los Angeles Theatre, at the request of then-Mayor Tom Bradley, to save it from demolition.

Even though he has been successful in propelling creation of a streetcar and drawing new businesses, Huizar continues to think of the theaters as vital to the future of Broadway.

“I’m really excited about this project,” said Huizar, who credits the Bringing Back Broadway initiative in part to a conversation he had with Ezat Delijani about the potential of the street.

“I’ve always seen the theaters as the anchor for the revitalization of Broadway, as the places that can bring that critical mass of people that can walk the street and create more activity.”

While most people involved with the revitalization of the street applaud the Delijanis’ long-awaited efforts, some have doubts about the feasibility of their ambitious plans.

Steve Needleman, who reopened Broad way’s Orpheum Theatre in 2001 and fills it with shows, concerts and filming, cautioned that the theater and nightlife business in Downtown is tough. While he supports any effort to activate the venues, he said renovating one theater is hard enough, let alone taking on multiple buildings and attracting operators to each.

There could be other local competition. Mitchell Frank of concert promoter Spaceland Productions is in the midst of a renovation of the Regent Theatre at 448 S. Main St. He expects to book rock bands and other music when it opens by early next year.

No timeline has been announced for when bars and restaurants would open in the theaters. Nor has a budget been revealed. Bartolo said the effort would be largely self-financed by the family.

There could be other hurdles, including protests from some neighbors.

“For some of the theaters there are residential issues,” said Needleman. “I’m building an apartment building directly next door to the Tower Theater.”

He was referring to the Singer Sewing Machine Building, an eight-story structure at 806 S. Broadway. Needleman is turning it into a housing complex with one large unit planned per floor.

Needleman said he is also concerned that the application going before the city states that all the venues would operate 24 hours a day.

“That’s just not reasonable,” he said. “It means you want to have a rave. What else is still going at 5 o’clock in the morning in L.A.?”

Bartolo said the 24-hour proposal is so that filming could take place when the theaters are not being used for other things. Additionally, she said meetings about the plans have been held with community groups such as the Downtown Los Angeles Neighborhood Council, and that safety issues are being discussed with the LAPD.

The transformation of the theaters would require that renovation work be approved by the city’s Cultural Heritage Commission, since all of the theaters are registered Historic Cultural Monuments.

While much remains to be done, Huizar is hopeful. He said the plan would help Broadway catch up to other nearby, increasingly vibrant after-dark corridors.

“A lot of the nighttime activity that you see right now in the Historic Core is on Spring Street,” Huizar said. “Eventually that type of entertainment use was bound to spill over on Broadway. So this is fulfilling that vision.”

DOWNTOWN LOS ANGELES - One of these things is not like the other: the Santa Monica Promenade, the Americana at Brand, Old Town Pasadena and Br…