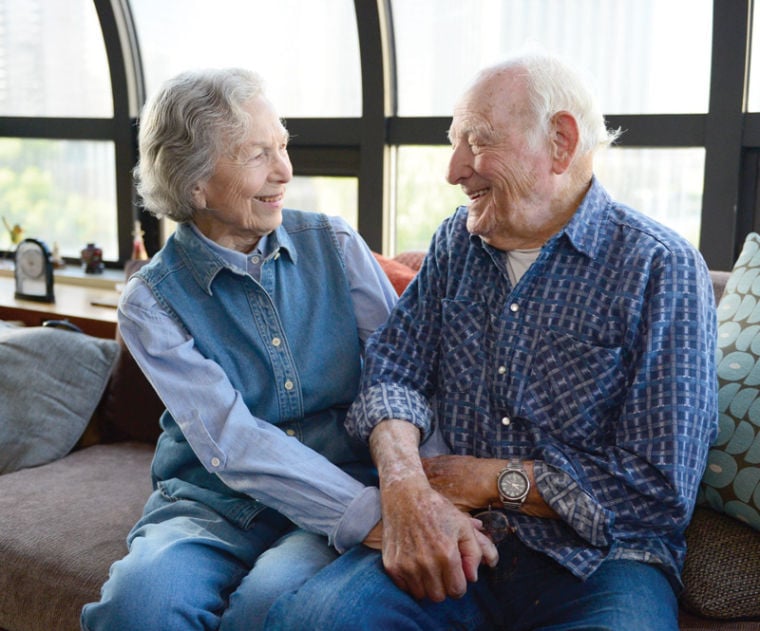 Morrie Markoff, who is 99, and his wife Betty, 97, moved Downtown 18 months ago, after 42 years in Silver Lake. They call their sixth-story condo with a sweeping view their “gilded tenement.” 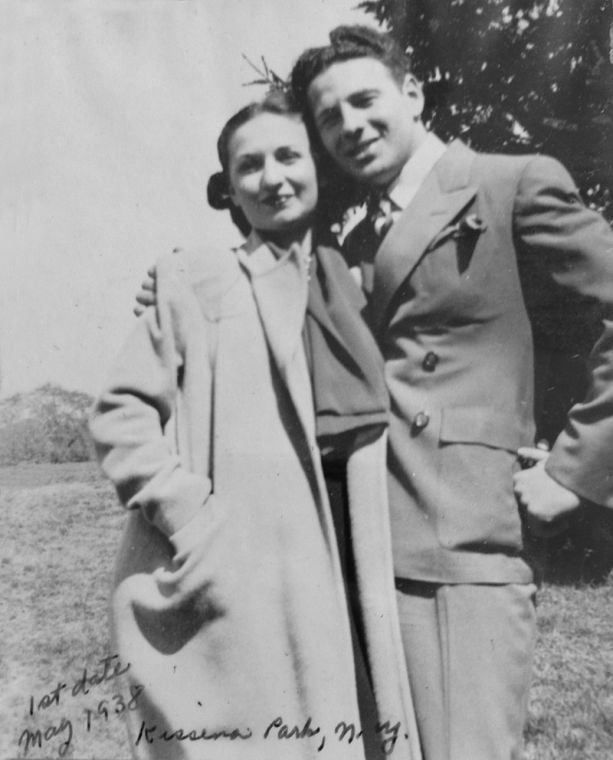 Morrie and Betty Markoff on their first date in New York. They got married Nov. 4, 1938, in Los Angeles and had a small reception after the ceremony at La Casa Golondrina on Olvera Street.

Morrie Markoff, who is 99, and his wife Betty, 97, moved Downtown 18 months ago, after 42 years in Silver Lake. They call their sixth-story condo with a sweeping view their “gilded tenement.”

Morrie and Betty Markoff on their first date in New York. They got married Nov. 4, 1938, in Los Angeles and had a small reception after the ceremony at La Casa Golondrina on Olvera Street.

DOWNTOWN LOS ANGELES - In her 97 years, Betty Markoff received bad advice from time to time. No observation was quite so off, though, as her girlfriend’s back in 1938.

The gal, Dorothy, told Betty that the handsome, hard-working salesman she’d just met in New York, Morrie, was not the marrying kind. Betty better not get her hopes up, the friend advised, that Morrie would find a good job and make a life for the two of them.

Two children, five grandchildren and two great-great grandchildren later, the Downtown Los Angeles residents giggle at that faulty prediction, as they approach their 75th wedding anniversary. They’ll celebrate it on Monday, Nov. 4, with a lunch at the Omni Los Angeles Hotel. It will be attended by some family, but nothing too fancy, Morrie said.

In fact, there’s so much hubbub surrounding his 100th birthday celebration in January that the almost-centenarian swats dismissively at the air and says everybody gets older. But, he acknowledged, not many people spend seven-plus decades with the person to whom they said “I do.”

The couple is new to Downtown Los Angeles. They moved to a Bunker Hill condominium complex 18 months ago after 42 years in Silver Lake, at the urging of their daughter, Judith Markoff Hansen (she founded the once popular Downtown cafe Gorky’s), who also lives in the building. Sitting in their sun-splashed living room one morning last week, the Markoffs said they take the bus around town, and walk the pedestrian bridge from their place to the area around the Central Library, by way of the Westin Bonaventure elevators. When they lived in Silver Lake they hoofed 3.2 miles around the reservoir almost every morning for four decades, Morrie said.

The nonagenarians also love to grub at the Department of Water and Power cafeteria. The meals they eat out echo the ones Betty makes, nutritiously balanced in the way she was taught in high school: a protein, a starch, a vegetable and a salad.

The couple seem pleased with their one-bedroom, one-bathroom unit. The sixth-floor residence has two balconies, where Morrie reads the newspaper each day and watches construction workers building the art museum The Broad and an adjacent apartment tower. It’s a far cry from his childhood home.

“In the tenement, in East Harlem, there were six of us in three rooms. We shared a toilet with everyone in the hall. And my room looked out to a brick wall. Look at this view!’ he said excitedly, referring to his Downtown home.

“It’s our gilded tenement,” Betty joked, grabbing a plastic comb from the drawer and running it through Morrie’s white hair, windblown from the balcony’s cross breeze.

Wedding, Then a Wedding

Betty was born in Toronto and moved to Queens when she was 10. Morrie grew up in hardscrabble East Harlem, where he was out shining shoes for a nickel a pair at the age of 9. Yet, despite their different backgrounds, Morrie and Betty grew up reading the same books and playing the same games, like marbles.

Morrie loves to tell the story of how they met.

“Betty and I were seated next to each other at her cousin’s wedding. It was 1938,” said Morrie, who speaks with a deliberate cadence. “I had come into town for this wedding. I had Betty on one side, and on the other, this beautiful girl, Rosa. Her family had money, she was well educated, and everyone asks why was I attracted to Betty and not Rosa?

“Betty ate less,” he said, breaking into laughter, as Betty shook her head.

Ten months, a handful of handwritten letters and a Trailways bus ride later, a rabbi, whom they found in the phonebook, married the Markoffs in Los Angeles. A no-frills reception followed at La Casa Golondrina on Olvera Street.

Morrie, who landed a job in Los Angeles selling vacuum cleaners, eventually founded an air conditioner and appliance company, which he ran for 25 years. Betty stayed home and raised their two children, Judith and Steve Markoff.

In the winter, when there wasn’t much call for air conditioning, Morrie found himself with downtime. Never bored — there’s always another book to read or fact to learn, he said — he often tinkered with machines and machine parts. Cleaning a toilet one day in the early 1960s, he noticed how the tank’s brass float looked like a ballerina’s skirt. He was going to throw it away, but instead took some junk wire and fashioned the materials into a ballet dancer. Now it sits in his window.

“I’m not an artist, but before you knew it, they just came to life,” he said of the 20 or so sculptures he’s made over the years.

Some of those works will be displayed in January at the Red Pipe Gallery in Chinatown. They include sculptures of a softball coach and a guitar player, both nods to his daughter, and a shoeshine boy in the 1920s, a nod to himself. Morrie’s favorite piece is of a table full of men playing chess, everyone intent on winning except the guy at the end with the cigar who couldn’t care less.

“I’m a lousy chess player, but this scene was painted on my mind,” he said.

Tracy Huston, director of Red Pipe Gallery, met the Markoffs on a bus; Morrie began chatting her up, as he does most strangers. He is excited about showing his pieces, but with the understanding that they are not for sale — all of Morrie’s work will stay in his family.

“The most exciting thing about his work is he’s taken what others would see as castoff materials and created something beautiful, from a moment in his life or past profession, and we’re so happy to celebrate that spirit in the gallery,” Huston said.

Just because the Markoffs have made it to their diamond anniversary doesn’t mean that life was always easy. Relationships are difficult, Betty said, adding that she thinks people today tend to give up too quickly, when things get rough.

Steve Markoff lauds his parents for their grit and tenacity, and is thankful that they enjoyed traveling and carted the family to so many different countries. The journeys are chronicled in Morrie’s photographs; he has shot thousands of images of trips to Asia, Europe, Mexico and other spots around the globe, and created bound albums from the works.

“My parents love talking to people and are interested in everything,” Steve said. “They have this childlike quality to them, like everything is new and they want to know how it came about. They’re both honest to a fault and completely stubborn. They’ll defend their position to the bitter end.”

They key is to listen, said Betty. Even if she doesn’t agree with her husband, she still has to listen to his side, and he to hers.

“You have to speak each other’s language,” Betty said. “And I don’t mean French or Spanish. I mean, listen to what they’re saying. It’s amazing the things you’ll get back.”