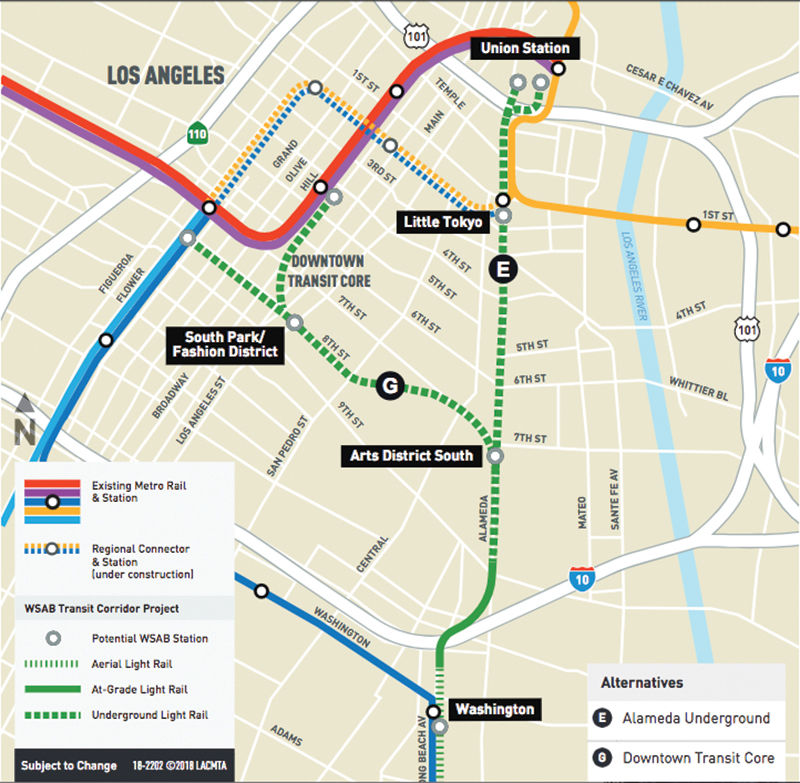 Metro is trying to determine the end point in Downtown for the 20-mile West Santa Ana Branch Transit Corridor. Current options call for stopping at either Union Station or in the Financial District. 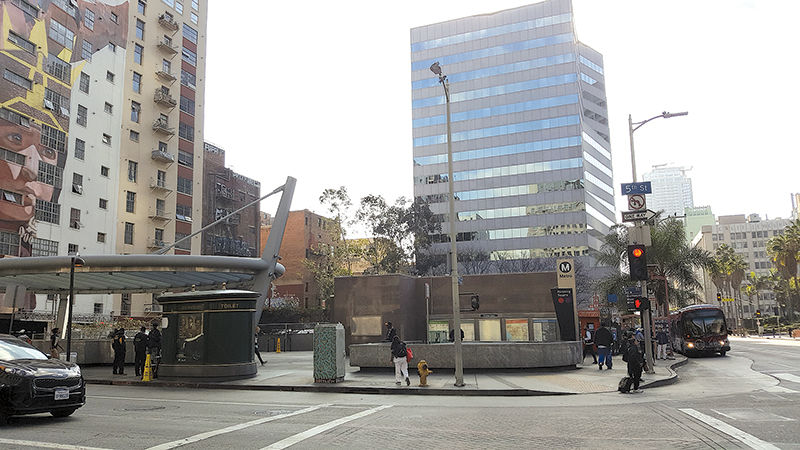 The Pershing Square Metro station at Fifth and Hill streets.

DTLA - Last month, the Metropolitan Transportation Authority eliminated from consideration a Pershing Square stop on an upcoming rail line that will link Downtown Los Angeles with Southeast Los Angeles County. The move has sparked an outcry among some Downtown stakeholders, who say the station would help connect regional workers directly to a major employment hub in the Central City.

A collection of business groups, neighborhood organizations and property owners want Metro to change course and include Pershing Square in its study of a possible terminus for the West Santa Ana Branch Transit Corridor, a light-rail line that will connect Downtown Los Angeles with Artesia. The 20-mile $4.6 billion project is in the environmental study period, and will not break ground for at least three years.

The main route has been set, but over the last year Metro has held a series of community meetings to determine the path and ending point in Downtown. It has narrowed down the options, and in July revealed plans to terminate either at Union Station or at one of two locations in the Financial District: Pershing Square or Eighth and Flower streets. On Dec. 6, the Metro Board of Directors voted to remove Pershing Square from further study.

The Downtown groups say they are not demanding that the line culminate at Pershing Square, but that they want it to be considered along with the other routes, and for the process to be transparent, according to Jessica Lall, executive director of the Central City Association.

“We’re concerned that the options are already being narrowed down significantly, down to only two, while we’re just getting started on the EIR,” Lall said. “Our approach is to be able to have as much information and as many options studied before making the final decision.”

In a letter to Metro CEO Phil Washington, the Downtown Center Business Improvement District urged the agency to add Pershing Square to the environmental study, calling the route an “insurance policy.” Blair Besten, executive director of the Historic Core Business Improvement District, echoed that, saying it is better to study the option now rather than having to redraft an EIR later in the process in case something goes wrong with another route.

Brian Haas, a Metro spokesman, said the main reasons for eliminating Pershing Square from consideration were its ridership numbers and the cost effectiveness of new riders at the station versus a stop at Eighth and Flower streets that directly connects to the existing Seventh Street/Metro Center station.

“Seventh and Metro Center also provides the best connectivity to the Metro Rail network, immediately allowing connections to Red and Purple subways and Regional Connector north-south and east-west light rail transit lines (currently Expo, Blue and Gold Lines),” Haas said in an email. “There are also physical design issues with connecting with Regional Connector lines in the future, if Pershing Square is used as the terminus station.”

The Downtown advocates who attended the Dec. 6 Metro board meeting said agency staff stated that the Pershing Square stop would involve angles and alignments that would be unfeasible. The stakeholders contend that was the first they had heard of the issue despite multiple meetings with Metro.

Planning and land use consultant Kate Bartolo, who is working with the groups, noted that Metro would need to build a one- to two-block underground pedestrian passageway at Eighth and Flower streets to connect it to the Seventh Street/Metro Center station, a step that would involve additional modifications to the latter stop.

“Seventh Street/Metro Center is already busy,” Bartolo said. “There are legitimate questions of whether it can accommodate additional traffic. Also, Pershing Square is the center of Downtown; it serves the Financial District and Historic Core, both in terms of workforce population and residents, plus the Bunker Hill cultural hub.”

Metro is also still considering a terminus at Union Station, although the latest revision partially changes the previous route. Metro has revised plans so the West Santa Ana branch would be further east than in the past, which would avoid streetscape changes along Alameda Street.

Metro is planning another round of community meetings in the coming weeks, although Haas said the dates have not been determined. He said people will have the opportunity to provide feedback.

The community and business groups upset with Metro’s decision said they plan to lobby the transit agency. Lall said she hopes that Metro will either better explain the drawbacks of Pershing Square, or agree to reconsider the station.

The West Santa Ana Branch project is being funded by Measure M funds approved by L.A. County voters. Metro plans to break ground on the line in 2022 and complete it in time for the 2028 Summer Olympics.