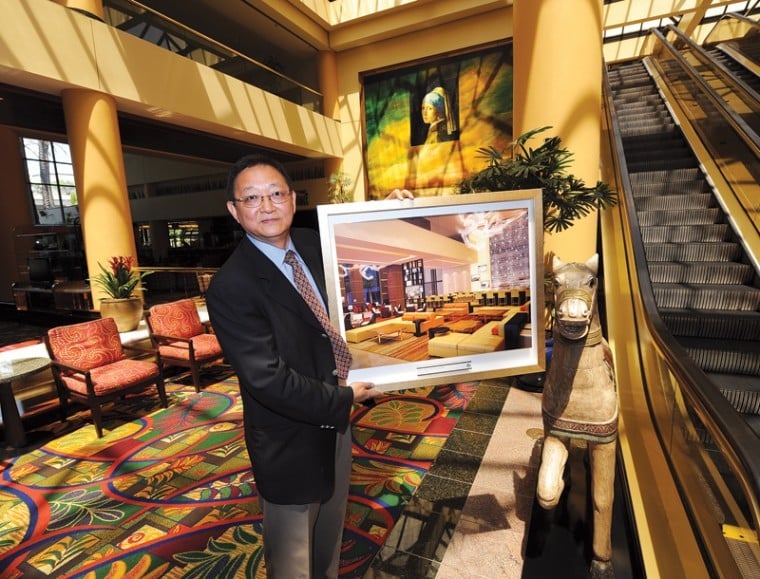 General Manager Daniel Teng at the L.A. Hotel Downtown at Third and Figueroa streets. The 1984 establishment, which long operated as a Marriott, is undergoing a $20 million upgrade. Teng is holding a rendering of the lobby after the renovation. 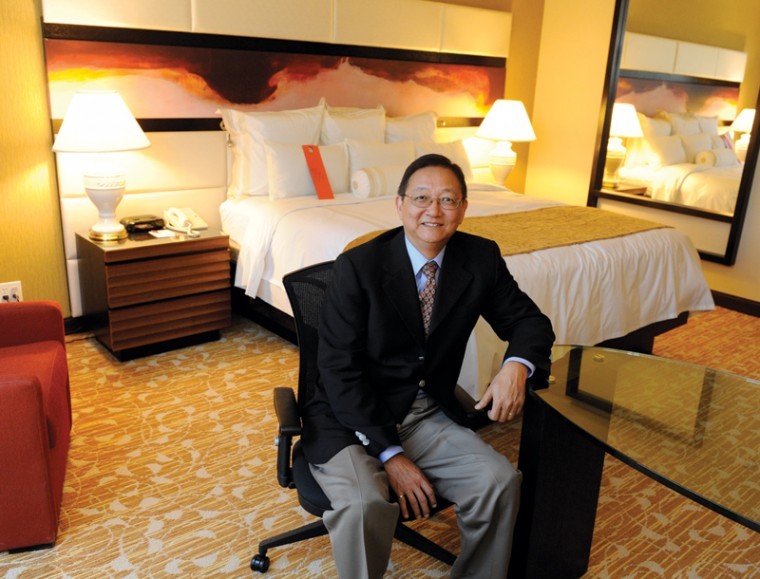 Fixes in the 14-story structure include upgrades to all 469 guest rooms. The 1980s lobby will also be modernized.

General Manager Daniel Teng at the L.A. Hotel Downtown at Third and Figueroa streets. The 1984 establishment, which long operated as a Marriott, is undergoing a $20 million upgrade. Teng is holding a rendering of the lobby after the renovation.

Fixes in the 14-story structure include upgrades to all 469 guest rooms. The 1980s lobby will also be modernized.

DOWNTOWN LOS ANGELES - The hotel at Third and Figueroa streets has been a lot of things over the decades. Most notably it was a Marriott, long before Downtown got a sparkling new J.W. Marriott as part of the Convention Center hotel.

It was also the home, for a time, of Downtown’s only first-run movie house, a four-screen basement-level Laemmle that showed the blockbusters, usually without the big crowds.

It was where actor Christopher Walken starred in Fatboy Slim’s “Weapon of Choice” music video in which he danced and glided in the air (thanks to wires) around the hotel’s lobby. It was where choreographer Heidi Duckler set a roving dance performance that concluded with a mermaid in a swimming pool.

By next spring, however, the establishment will be something else: a significantly renovated business that, its owners hope, will be able to compete with Downtown’s growing and otherwise updated hotel stock.

The changes have already begun. This month, the hotel’s Chinese owners changed the name. Shenzhen New World Group, which purchased the establishment in 2010 for $63 million, is temporarily calling it the L.A. Hotel Downtown.

A $20 million renovation will upgrade all 469 guest rooms, along with the meeting and ballroom areas and the building’s restaurants. The public spaces in the 14-story edifice are also being modernized.

The Shenzhen Group is in final talks with a new operator to replace the Marriott brand, said general manager Daniel Teng. The L.A. Hotel name will change, likely within a month, when the agreement is signed.

Teng said changes will make the 28-year-old establishment more competitive with other Downtown hotels and allow it to attract convention visitors and tourists.

“You have to keep your property updated to remain competitive,” he said. “If you don’t improve yourself you’re going to be left in the dust.”

The hotel will remain open during the renovations, which have already started on two floors. The work will bring a modern, minimalistic and earthy feel to the hotel, with a color scheme consisting of bright reds, oranges and beiges. New carpets, lighting and furniture will be installed.

The upgrades are intended to represent elements of California, Teng said, with references to deserts, the city and Downtown.

“The 1980s and ’90s style was designed to the Marriott brand standards, but with the Marriott brand leaving the hotel, and since we are in the process of negotiating another brand coming in, we wanted to make these changes,” he said.

The work at the L.A. Hotel Downtown is the latest in a string of upgrades and additions to Downtown’s tourist businesses. They were sparked in the early to mid-part of the last decade by the construction of Staples Center and L.A. Live, and additional momentum has come from the much-discussed, though far-from-finalized, plan to create the football stadium Farmers Field and expand the Convention Center.

Luxe Hotels this year completed a $10 million upgrade and rebranding of the former Holiday Inn at 1020 S. Figueroa St., across from L.A. Live. Of course, the biggest change was the creation of the 1,001-room Ritz-Carlton/J.W. Marriott. The $1 billion establishment opened in 2010.

More changes are coming. Portland-based Williams/Dame Associates in June broke ground on a $172 million project that will create two Marriott brand hotels in a single building across the street from the Convention Center hotel. Meanwhile, Korean Air continues with its $1 billion plan to tear down the Wilshire Grand and build a 900-room hotel on the site. It is slated to open in 2016.

“Upgrading the hotel inventory in Los Angeles is good for our customers and will assist us in selling the city as a convention destination in a very competitive environment,” Mark Liberman, the president and CEO of the L.A. Tourism & Convention Board, said in an email.

It’s not just the familiar names that are looking for a foothold. In January officials with Oregon-based Ace Hotel announced plans to open a 180-room business in the United Artists Theater at 933 S. Broadway. Additionally, PNK I Group, a Hollywood-based hotel developer and operator, is looking to break ground soon on a venture at 419 S. Spring St.

Gary Toebben, president and CEO of the Los Angeles Area Chamber of Commerce and a board member of the Downtown-based Hotel Association of Los Angeles, said the L.A. Hotel’s renovation is another good sign for the tourism industry.

“It signals that people believe that investing in hotel rooms in Los Angeles is worthwhile,” he said. “I think people are optimistic about additional conventions and tourism in the future.”

Some of the changes that have already taken place at the L.A. Hotel reveal the emergence of a new identity.

The old rooms, which date to the building’s 1984 opening, featured heavy concentrations of wood and brass. That has given way to dark woods, leather headboards, gold-colored carpeting, sleek metal lamps and glass-top desks.

In the hallways the carpets are being changed from green and beige patterns to splashes of bold, reddish colors.

The lobby carpeting and floors will transform from the busy, bright 1980s motif to a minimalist contemporary look with soft blue and orange hues. The mismatched furniture will be replaced by leather chairs and couches. The two lobby restaurants will be combined into a single 24-hour spot.

The average room at the hotel currently runs about $170 per night. Rates are expected to rise a bit after the renovation, but Teng said new figures have not yet been determined.

Teng said challenges in the upgrade include completing the work while the hotel remains open, and making sure that the changes fit with the brand characteristics of a future operator.

“Each brand has a certain favorite color scheme, so we have to be very, very sensitive about that,” Teng said.

The change in operators was a mutual agreement partly due to the cluster of Marriott brands in Downtown, he noted.

“Marriott is a major brand which brought us a lot of business and was very profitable in the past, but when you have so many Marriotts in a certain place we looked at different opportunities,” Teng said.