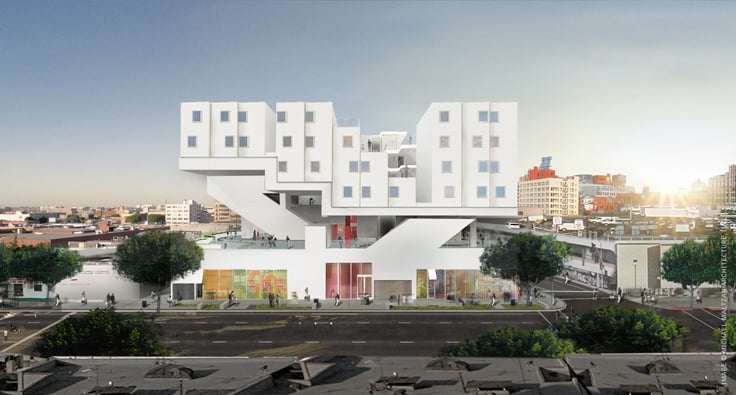 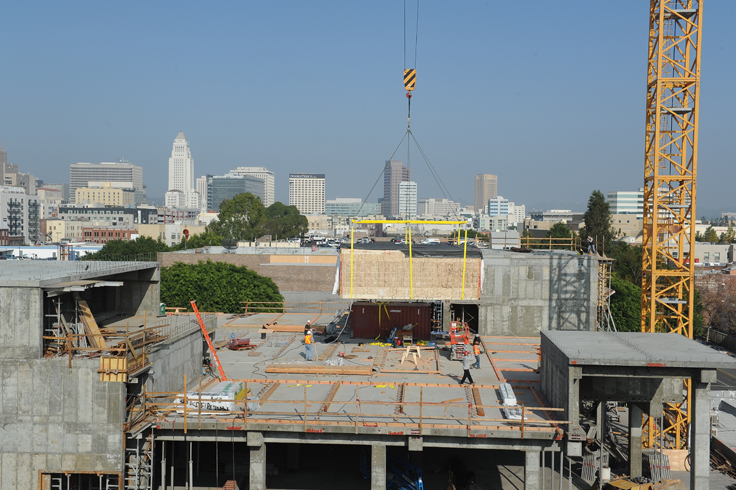 One of the pre-fabricated units is lowered by crane onto an existing structure at the Star Apartments last week. 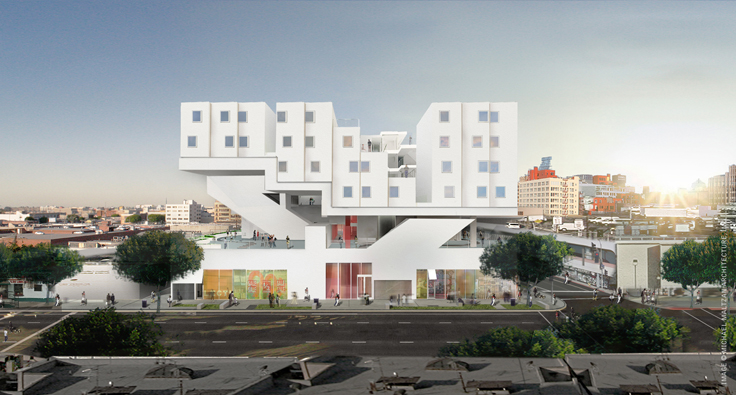 One of the pre-fabricated units is lowered by crane onto an existing structure at the Star Apartments last week.

DOWNTOWN LOS ANGELES — When it comes to real estate development, controlling cost is a universal goal.

It was that goal that led nonprofit developer Skid Row Housing Trust, which creates apartments for the chronically homeless, to its latest construction model — build the apartments offsite in a factory and have them trucked into Central City East.

The $20.5 million Star Apartments is rising atop a one-story structure at Sixth and Maple streets that SRHT acquired in 2008. But unlike other construction sites in Downtown, there are no hammer-wielding workers erecting wood frames. Instead, a crane is lowering prefabricated residences one-by-one onto a concrete superstructure that was poured over the existing edifice.

In a matter of weeks, 102 of the wood-framed modules will be affixed to the superstructure, saving potentially months worth of construction labor.

“We were looking for high quality housing that can be produced faster,” said Mike Alvidrez, executive director of SRHT.

The design and layout hinge on a recreation area on top of the existing structure that will have a basketball court and a running track. The apartments will sit above that community-focused pad, which was previously an elevated parking garage.

Skid Row Housing Trust owns and manages about 1,000 Downtown apartments. In recent years, operations have focused primarily on new construction. But most of the stock is in old low-income hotels.

The new project, which follows the model known as permanent supportive housing, places a premium on having on-site social services, from mental health treatment to case management for social benefits. In theory, formerly homeless individuals are more likely to utilize services if they’re under the same roof as their apartment.

Alvidrez said that recent Downtown developments have also shown that recreation spaces, from rooftop gardens to communal kitchens, have helped build a sense of community that further incentivizes residents to stay housed.

That’s why the Star will feature about 15,000 square feet of community space, including offices for on-site social services. The recreation facilities will be available to residents from SRHT’s older buildings.

The prefabricated apartments measure about 350 square feet and were manufactured in Idaho by Guerdon Enterprises. The units were trucked to Los Angeles and stored in a lot near SCI-Arc until the base superstructure was completed.

Each unit is delivered with toilets, appliances, cabinets and surface finishes installed. After all the residences have been put into place, they will be sheathed in a protective material, then stucco-finished like most modern multifamily projects, said Lad Dawson, CEO of Guerdon Enterprises.

“The big thing is that by constructing the buildings in a factory, we’ve been able to demonstrate the ability to produce a higher quality product on a more reliable budget and time schedule than is generally available with site-built construction,” said Dawson. “Secondly, we’re able to complete the construction much faster and there’s very little construction waste.”

The Star costs about $2 million less than SRHT’s recently completed 104-unit New Genesis Apartments on Main Street. The comparison indicates a modest savings on the Star, but Alvidrez said the project would have cost more using standard construction, which would have likely entailed demolishing the existing structure.