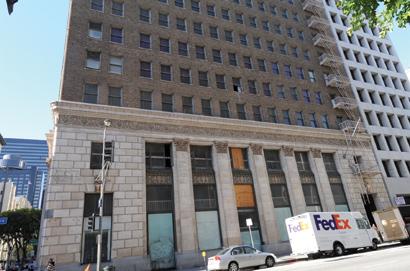 Giannini Place, a city-designated historic landmark at Seventh and Olive streets, has sat vacant for more than a decade. It is one of three derelict Downtown properties owned by the Chetrit Group. Photo by Gary Leonard. 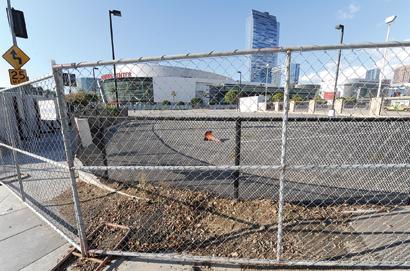 The onetime parking lot that was slated to house the mixed-use mega-project L.A. Central is now fenced off and unused. Lender Wells Fargo has initiated foreclosure proceedings on developer the Moinian Group. Photo by Gary Leonard. 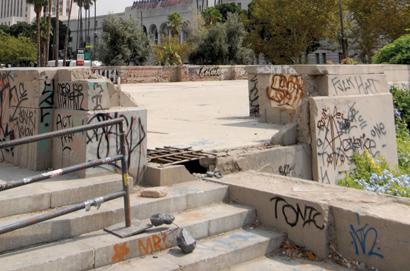 Although it has a prime position just west of City Hall, a state-owned property that once held a state office building these days is little more than a graffiti pit. Officials are slow to whitewash it. Photo by Gary Leonard. 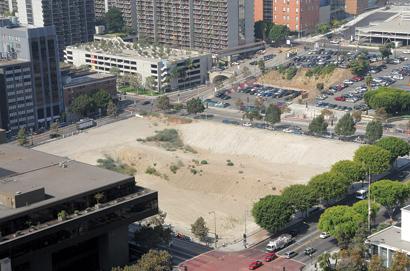 Giannini Place, a city-designated historic landmark at Seventh and Olive streets, has sat vacant for more than a decade. It is one of three derelict Downtown properties owned by the Chetrit Group. Photo by Gary Leonard.

The onetime parking lot that was slated to house the mixed-use mega-project L.A. Central is now fenced off and unused. Lender Wells Fargo has initiated foreclosure proceedings on developer the Moinian Group. Photo by Gary Leonard.

Although it has a prime position just west of City Hall, a state-owned property that once held a state office building these days is little more than a graffiti pit. Officials are slow to whitewash it. Photo by Gary Leonard.

DOWNTOWN LOS ANGELES - It is easy to wander through Downtown Los Angeles and point to some of the gems that have arrived in the past decade. All across the community, formerly dead plots of land and abandoned buildings have been transformed into high-end housing, neighborhood-serving restaurants, office structures or even green space.

Yet in some notable cases, nothing has changed in the past 10 years, and former derelict properties continue to sit empty and/or uncared for. In certain instances the blame falls on absentee landlords, figures based far from Downtown who don’t care what happens as long as they one day make a profit on a sale. Other times, the problem is more troubling, as occurs when a governmental entity owns a building or plot and lets it tumble into eyesore status.

Los Angeles Downtown News has rounded up 10 of Downtown’s most notable, and most disturbing, languishing properties. There is a lot of variety — the list includes vacant buildings, unfinished construction sites and even a fenced-off parking lot. What they all have in common is their squandered potential. Each one, due to its size, historic status or location (many are surrounded by redevelopment) could become another boasting point, if only someone invested in it.

Instead, they all sit unused, waiting for a turnaround, whether of their owner’s volition, or from community pressure. Here, in alphabetical order, are the worst offenders, as well as what could be their next steps.

Eyesore Factor: A pair of adjacent buildings at the northeast corner of Fourth Street and Broadway have stood empty and gutted since a 2007 fire. At least one of the structures was designed by City Hall architect John Parkinson circa 1900. At the time of the fire, an official with preservationist organization the Los Angeles Conservancy told the Los Angeles Times that the buildings’ destruction was “one of the most significant losses to that district in recent memory.” Owner Eli Sasson of Sassony Commercial Real Estate Development submitted an application to demolish the buildings — which sit on a street teeming with pedestrians — more than a year ago, said his attorney Barry Gross, but was denied because he did not have a plan for replacing the buildings and so that the city could conduct a required historic assessment of the properties before they could be torn down.

What’s Next?: Sasson expects to obtain demolition approval this year, said Gross. The owner is working on a new plan for the site that would consist of a multi-story building with ground-floor retail and a yet-to-be-determined component on the upper floors. There is no timeline.

Eyesore Factor: This often graffiti-covered, cement rectangle immediately west of City Hall and north of the Times building has long been a blight spot in the heart of the Civic Center. The state-owned property near the glossy new LAPD headquarters once held a state office building, which was razed after suffering damage in the 1971 Sylmar earthquake. It was targeted for a new office-retail project in the 1980s, but that deal fell apart after the Downtown office market turndown of the early ’90s. The property has since housed a homeless encampment (later cleaned out), and in the last several years has served as prime real estate for taggers, with officials being slow to whitewash it.

What’s Next?: The state Department of General Services expects to produce a report on options for the site, said DGS spokesman Eric Lamoureux. The report will analyze the cost and feasibility of possibilities such as constructing government office space there, leasing the land to a developer or selling it. There is no timeline for when a plan might move forward.

Eyesore Factor: This shuttered, 13-story property at the southwest corner of Eighth and Olive streets occupies a key location on the border of the Fashion District and South Park. It stands across the street from the Bristol Hotel, which is currently being renovated, and businesses including the Italian restaurant Colori Kitchen and the Golden Gopher bar. The building, designed by prominent architects Walker and Eisen, has been owned for more than eight years by the Kianmahd family and its partners, according to title documents. Previous renovation plans were thwarted by infighting among partners and later, the economy, said co-owner Bruce Kianmahd.

What’s Next?: There are no current development plans for the building, said Kianmahd. The ownership group may sell the property or explore redevelopment options once the economy improves.

Eyesore Factor: This eight-story, 1913 building, originally known as the Trinity Auditorium, is a city-designated historic landmark owned by the New York-based Chetrit Group. The building was previously owned and used as a dormitory by the University of Southern California, but has stood vacant since the mid-1990s. In 2005 the owner-developers announced a $30 million plan to transform the property into an upscale hotel, but the operator later dropped out. Last summer, the Chetrits submitted a different hotel plan to the city’s Cultural Heritage Commission. The property is just north of the Fashion Institute of Design and Merchandising and a block east of the Ralphs supermarket.

What’s Next?: Plans to turn the building into a hotel are still moving forward, said a consultant, though the proposal is in the design phase and there is no current timeline for completion.

Eyesore Factor: A prime 3.6-acre plot that once held a state office building is now a fenced-off hole. Congress had appropriated $314 million to build a federal courthouse on the property; the structure would have included 41 courtrooms, judges’ chambers and office space for federal agencies. However, the plan stalled in 2007 after the project’s budget skyrocketed to $1 billion. The U.S. General Services Administration then went back to the drawing board, and there has been no movement on the property since. Meanwhile, in the recent rains the hole became a mini-lake, complete with greenish water and garbage-strewn banks.

What’s Next?: The courthouse proposal remains on hold while officials rework the plan, said GSA regional public affairs officer Gene Gibson. There is no timeline for starting construction.

Eyesore Factor: This 1929 building, designed by architect Claud Beelman (who also designed Downtown’s turquoise Eastern Columbia Building), is not only a city-designated Historic-Cultural Monument, but also occupies a slot on the National Register of Historic Places. The 12-story, Art Deco-style former office structure at the northwest corner of Eighth and Hill streets boasts unique visual flourishes, such as an ornate entrance awning with a sunburst pattern on its underside. Brothers Shlomo, Yoab and Sammy Botach, along with several partners, have owned the property since 1991. The building has remained vacant that entire time. A $10 million plan to convert it into housing was scrapped because of budget issues, said Sammy Botach.

What’s Next?: The owners plan to embark on a $6 million-$7 million renovation to make the property a functioning office building, Sammy Botach said, but there is no timeline.

Eyesore Factor: This city-designated Historic-Cultural Monument, erected in 1922, has stood empty for more than a decade. The lavish 12-story building at the northwest corner of Seventh and Olive streets once served as the headquarters for the Bank of Italy (the precursor to Bank of America), according to the Los Angeles Conservancy. The structure, located near a slew of recently opened restaurants along Seventh Street, is shuttered and is often scwrawled with graffiti. A few years ago the Chetrit Group, which owns the building, announced plans to turn it into more than 100 condominiums, but Chetrit representative Michel Attias said those plans have been scrapped because of the economy.

What’s Next?: A new plan for the property is in the works, Attias said, but details have not been disclosed and there is no timeline for the project.

Eyesore Factor: A 14-story landmark that once housed a jail, the coroner’s office and the District Attorney’s office has stood vacant since being damaged in the 1994 Northridge earthquake. The 1925 structure in the Civic Center has been empty since a renovation was halted in 2004 when questions arose over the extent of the damage and the cost to fix it. County officials have said that the price to restore the building could reach as high as $300 million. Still, there has been recent movement: The County Board of Supervisors voted Dec. 1 to initiate a new study that will analyze the feasibility of restoring the property, and officials indicated the renovation price could have dropped.

What’s Next?: The supervisors expect to receive the feasibility report soon, said Tony Bell, communications deputy for Supervisor Mike Antonovich. After that, the county would likely solicit bids from contractors to carry out the renovations. Timing would depend on the estimated budget once a course of action is selected, Bell said.

Eyesore Factor: This 11-story, long-vacant former hotel stands on Hill Street just south of Fourth Street, where it occupies a prominent plot near Pershing Square and the residential projects Metro 417 and the Title Guarantee Lofts. The building, once owned by the People’s Republic of China, is also part of the Chetrit Group’s portfolio; the company has controlled it since the late 1990s. Two years ago, Chetrit officials said that like the Embassy, the Clark would be turned into a boutique hotel. No work has been seen at the site since.

What’s Next?: The owners have not disclosed any current plans for the property.

Eyesore Factor: A four-acre parcel between L.A. Live and the Palm restaurant served until recently as a parking lot, but now sits fenced off. The property had been slated to hold New York developer the Moinian Group’s $1 billion L.A. Central project, conceived as a complement to L.A Live and planned to include retail, condominiums, restaurants and a hotel. There has been no movement toward construction, however, and Wachovia bank (since acquired by Wells Fargo) last year initiated foreclosure proceedings on the property after Moinian defaulted on a $55 million loan (the bank also recently filed a lawsuit over the debt). Another legal dispute, this one over parking revenue with L.A. Live developer the Anschutz Entertainment Group (which previously owned the site), led to the lot’s closure.

What’s Next?: The Moinian Group is still negotiating with the bank to hold on to the land, said Moinian director of development Oskar Brecher. There is no timeline for construction.