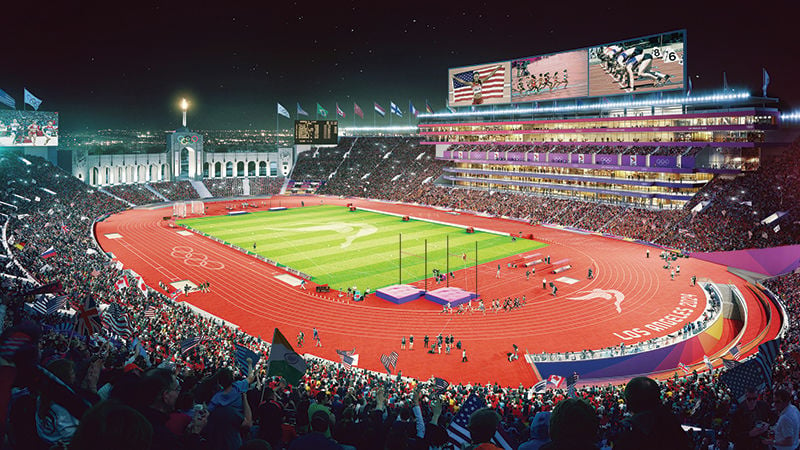 The Los Angeles Memorial Coliseum in Exposition Park was the centerpiece of the 1932 and 1984 Summer Olympics. In 2028, it will again host track and field events, and will be the site of the Closing Ceremonies. 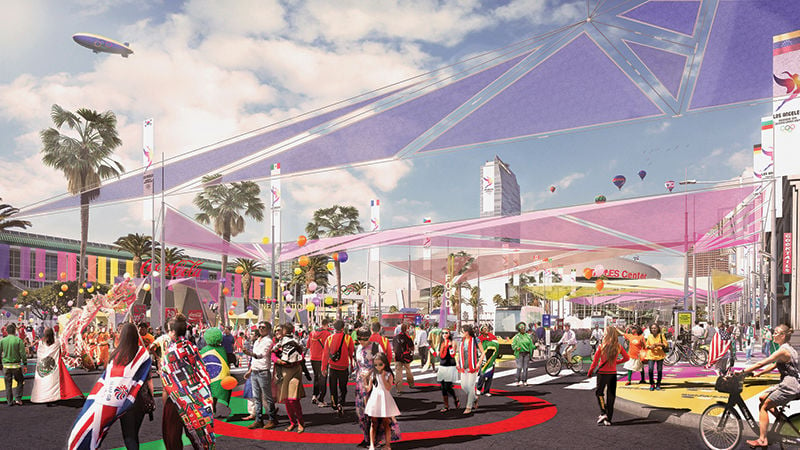 The area around Staples Center and the Convention Center will be a hub of the 2028 Summer Games. People who pass through a security perimeter will take in not only the athletic competitions, but a litany of cultural events and performances. 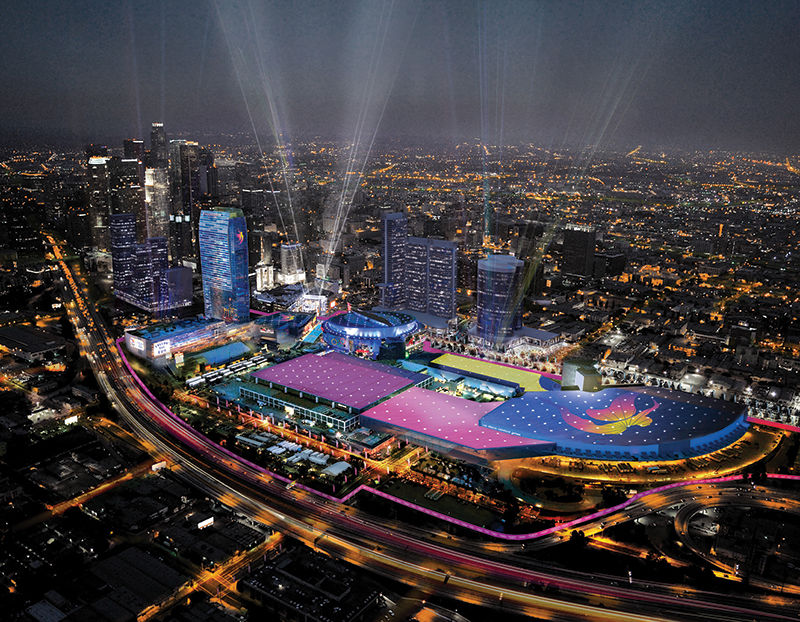 An aerial rendering of part of the Downtown “sports park.” The Convention Center will be the site of sports including boxing, table tennis and fencing. 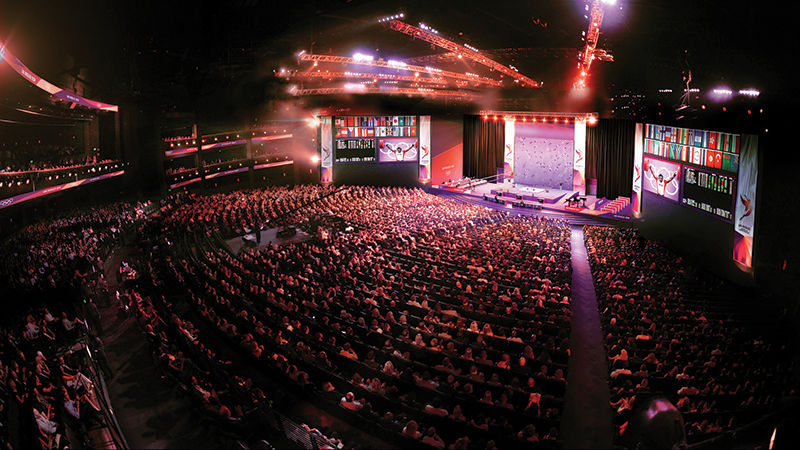 The Microsoft Theater frequently hosts concerts. During the 2028 Games, the weightlifting competition will take place there.

DTLA - On Aug. 11, the Los Angeles City Council voted in favor of having the city sign a contract with the International Olympic Committee and the city of Paris to bring the 2028 Summer Games to Los Angeles, four years after the Games take place in France. At this point the IOC’s vote to approve the awarding of two games at once, scheduled for Sept. 13 in Lima, Peru, seems a formality.

If everything goes as anticipated, the third Los Angeles Olympics will take place July 21-Aug. 6, 2028. While the eyes of the world will be on the entire region, Downtown Los Angeles will claim the highest perch on the athletic podium. That’s because a whopping 16 Olympic events will take place in the area.

So what will the Central City look like for those 17 days, as well as the weeks before the Games, and during the Paralympics that take place roughly two weeks later? Expect huge crowds, packed hotels and a massive security infrastructure.

The city won the Olympics on a bid built around using existing venues, without the need to construct the budget-busting stadiums and arenas required for past Games. The Los Angeles Games and related festivities will be based on that relatively modest approach, according to LA2028 CEO Gene Sykes.

The overall plan involves four “sports parks,” which are clustered zones of activities and event infrastructure. The most prominent of those is in Downtown (others are Long Beach, the South Bay and the San Fernando Valley). Local venues include Staples Center, the Convention Center — which will host numerous sports — and the Coliseum and other facilities in Exposition Park.

“Downtown is at the heart of our Olympics plan,” Sykes said.

Crowds will throng Downtown for an array of events. The Convention Center will hold everything from boxing and taekwondo to table tennis and fencing, all set up in temporary competition areas.

The activity extends to L.A. Live. The Microsoft Theater will be home to weightlifting events, while Staples Center will host the basketball finals.

The Figueroa Corridor will be activated with a series of live entertainment and art exhibits. This will carry the momentum south to the University of Southern California and Exposition Park.

The Olympics will utilize the Los Angeles Memorial Coliseum for track and field events, as well as the closing ceremonies. USC’s Galen Center will hold karate, while the university’s Dedaeux Field will be home to the popular swimming and diving competitions.

One of the newer venues will be Banc of California Stadium in Exposition Park, which will serve as the upcoming home for the Los Angeles Football Club; it is scheduled to open in 2018. During the Olympics, it will host some soccer games.

Other parts of Downtown will be also be activated for Olympic events. That includes Grand Park in front of City Hall, which will serve as the starting point for the marathon.

Olympic Ceremonies Belong in the Coliseum

The new USC Village will be the media headquarters for the thousands of national and international journalists who will come to town to cover the Games.

Much remains to be determined about an Olympic Games 11 years in the future. That includes the budget. Although the 2024 Olympics was set to cost $5.3 billion, the Council approved the 2028 Games without a final budget. That is expected to be revealed in the near future.

Estimates for crowds have not been unveiled, though LA2028 expects to sell 9.5 million tickets to competitions over the 17-day period, and another 3 million for the Paralympic Games. Roughly 16,500 athletes, supporting staff and coaches will come to Los Angeles, according to LA 2028.

The activity begins well in advance of the games, with some organizers arriving weeks or months before the athletes land in the city. Numerous tourists are expected to be in Los Angeles before or after the Games.

The Game Before the Games

Downtown hotels are expected to be packed, which also means a wealth of patrons for area restaurants, bars and shops. Downtown currently counts more than 4,400 hotel rooms, according to the Los Angeles Tourism and Convention Board. That figure is expected to reach 8,000 by 2020, and could continue to climb.

The impact of the Olympics will be felt ahead of 2028. The branding notoriety that Los Angeles stands to receive for the next 11 years is invaluable, according to Tourism and Convention Board President and CEO Ernest Wooden Jr.

“Our local hospitality, travel and tourism businesses are ready to ensure that our visitors and athletes have an unforgettable experience in one of the world’s most dynamic cities,” Wooden said in a statement.

One big difference between the last Los Angeles Olympics, in 1984, and the 2028 Games, will be mass transit. A growing regional rail network will be even built out before the Games open, including the long-awaited rail connection to LAX (scheduled to arrive in 2024).

When the Olympics Ruled Los Angeles

In Downtown, the $1.75 billion Regional Connector is slated to be finished in 2021. It will link three light rail lines, allowing transit users to traverse the county without transfers.

All of the transit service expansions were planned and developed separately from the Olympics, according to Dave Sotero, communications manager for Metro. Still, people in town for the Olympics will benefit. For example, a Purple Line extension is set to wrap in 2024, and will connect Downtown to Westwood, where the Olympic Village, the home for the athletes, will be on the campus of UCLA.

The 2028 Games will be privately funded. LA2028, which will oversee the competitions, is a nonprofit and plans to raise money through ticket sales, sponsorships and IOC donations. The agreement with the IOC will provide the city $160 million in advance of the Games, which will go to local youth sports efforts. The agreement also calls for Los Angeles to keep any profits, though Olympics are notorious money losers for host cities; only the 1984 L.A. Games were in the black.

Assistant City Administrative Officer Ben Ceja said that there are no expectations of public money going toward the Games. Enhanced city services utilized for the Olympics, such as police and medical teams, will be covered by the LA2028 budget, he said.

As with all major events in the 21st century, security will be tight in Los Angeles. The Olympics are expected to be designated a National Special Security Event, meaning the Secret Service will take the lead, coordinating with the FBI for counter-terrorism and state and local police. The Olympic bid book details a variety of participating agencies, everything from the Department of Homeland Security to the Coast Guard to FEMA and beyond.

The precise number of police and other security forces at the 2028 Games also has not been determined, but there has been a progressive militarization of the Olympics over the past decade and a half, according to Robert Muggah, research director for the Instituto Igarapé, a Rio de Janeiro-based think tank that studied the impacts of the 2016 Games in Rio.

Muggah noted that Beijing, London and Rio de Janeiro all saw large-scale military and police deployments. During the 2016 Rio Olympics, for example, there were 85,000 security personnel. Private security was also involved.

In past Olympics, the security measures have included anti-aircraft missile systems installed on rooftops, as well as an increase in surveillance and intelligence infrastructure. Muggah noted that Brazil spent millions of dollars on digital security surveillance systems. He added that law enforcement agencies from 55 countries were involved in security and counter-terrorism efforts.

When the Games finally arrive in 11 years, athletes from nearly 200 nations will be in Los Angeles. While no one yet knows who will win gold, it is already clear that billions of eyeballs around the globe will be watching what happens in Downtown.

When the 2028 Olympics arrive, 16 events will take place in what is known as the Downtown “sports park,” which includes USC and Exposition Park. Here is where the local action will occur.