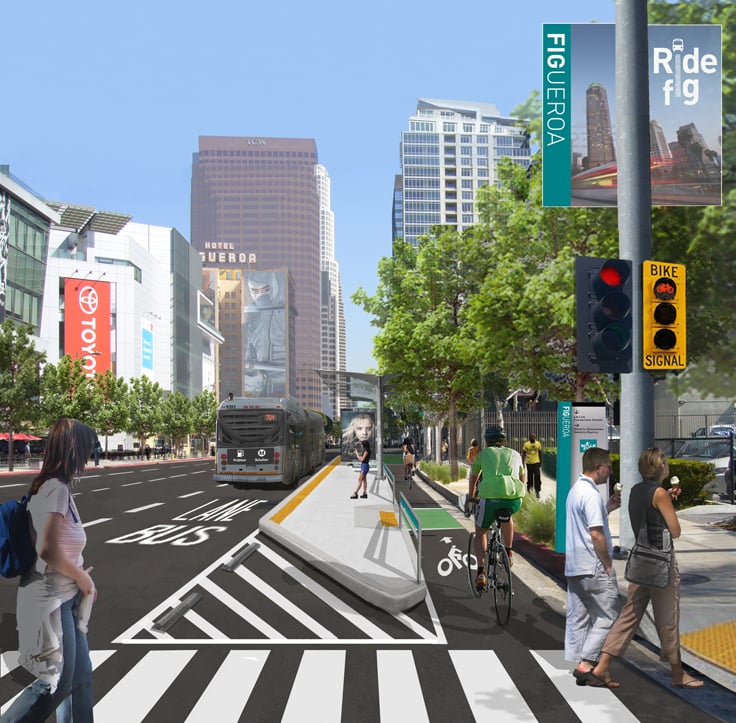 The re-designed streetscape would include a separated bike lane and widened sidewalks, plus more street trees. 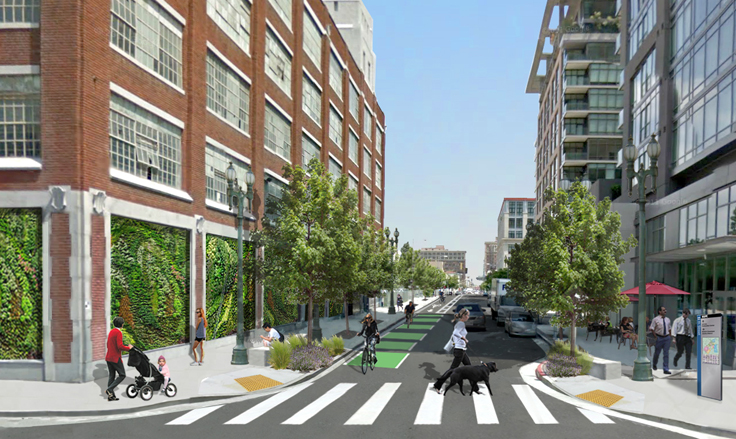 As part of the MyFigueroa plan to improve connections between Downtown and Exposition Park, a new bike lane would be added to 11th Street.

The re-designed streetscape would include a separated bike lane and widened sidewalks, plus more street trees.

As part of the MyFigueroa plan to improve connections between Downtown and Exposition Park, a new bike lane would be added to 11th Street.

DOWNTOWN LOS ANGELES - Driving may be deeply embedded in Los Angeles culture, but bike friendly and pedestrian-minded policy makers are slowly chipping away at the city’s car centricity.

No plan may be more emblematic of this gradual shift than a fast-moving $20 million initiative to vastly remake Figueroa Street between Downtown and Exposition Park into a haven for cyclists and transit riders.

The plan is particularly bold because it would swipe car lanes from a street that is home to a cluster of auto dealerships, the headquarters of the Southern California Automobile Club and a matrix of major venues and museums that rely on surrounding streets to deliver huge crowds. Representatives of all three constituencies are wary that the plan adored by bikers would spell doom for drivers.

“The whole problem of access and mobility for automotive vehicles needs to be seriously considered before we experiment with something that hasn’t been done anywhere else in L.A.,” said Darryl Holter, CEO of the Shammas Group, which owns eight car dealerships on Figueroa.

Backers of the MyFigueroa plan, which originated in 2010 as a project of the now defunct Community Redevelopment Agency, believe that new bike lanes, upgraded transit stops and safer sidewalks will improve mobility for non-drivers.

The latest version of the plan was outlined at a community meeting on Tuesday, April 9, that drew a mix of supporters, like those who made use of a bike valet outside the event, and critics concerned about traffic impacts.

For Melani Smith, a principal at Melendrez, the design firm contracted to lead the project, the goal is to “rebalance” the street.

“People say we’re shutting down Figueroa. I feel like we’re opening up Figueroa for all users,” she said.

The three-mile project area, which includes spurs down 11th Street and Martin Luther King Jr. Boulevard, would include north- and southbound bike lanes. Two segments of the northbound corridor would get “cycle tracks,” or lanes separated from traffic by a new curb.

Figueroa is currently different widths between Seventh Street and Exposition Park. The plan calls for eliminating at least one northbound lane throughout the stretch, and in some portions a southbound lane would be lost.

On the two cycle track segments, between Seventh and 11th streets and 21st Street and Exposition Boulevard, the new curb buffers would also serve as upgraded bus stop platforms. Sidewalks would be widened, more trees would be planted and better street lighting would be installed.

Holter and others have urged the city to consider a “couplet” approach that would put northbound bike lanes on Figueroa and move a second lane to southbound Flower Street. Smith said the couplet could not be funded as part of the MyFigueroa project because it was not identified in the original plan.

“You could do one way only on Figueroa and hope that Flower emerges some other way, but you couldn’t add Flower as part of this project,” Smith said.

Backers of the project say that protected bike lanes in other cities have proven far safer than lanes merely painted onto the road surface, like those on Spring, Main, First, Seventh and Olive streets and others in Downtown.

Bike advocates point to protected bike lane projects in New York and San Francisco that contributed to fewer accidents and increased retail business near the lanes.

“Most people don’t want to ride next to cars,” said Eric Bruins, planning and policy director for the Los Angeles County Bicycle Coalition, who added that painted lanes only moderately increase ridership.

Bruins said the Figueroa project is crucial for the city’s bicycle future because the cycle track would be L.A.’s first. While an early draft of the plan envisioned a cycle track connecting USC and Downtown, the revised plan chops it into two segments, with a painted lane between 11th and 21st streets and between Exposition and MLK Jr. boulevards. Organizers reduced the cycle track to appease stakeholders concerned about traffic impacts, Bruins said.

Although protected lanes in other cities may have been successful, Figueroa Street is different in part because it is a key regional transit corridor, said Hamid Bahadori, manager of transportation programs for the Southern California Auto Club.

“We should keep in mind that people on Figueroa are not all going between USC and L.A. Live and Downtown,” Bahadori said. “This is a regional corridor and the city should not lose sight of the need to accommodate regional mobility.”

Some Exposition Park institutions are still weighing the project and its potential impacts. James Gilson, vice president and general counsel of the Natural History Museum, said MyFigueroa would likely mean both good and bad things for the museum. Safer bicycle access is a plus for their attendees, but gridlock could dissuade other visitors from coming, he said.

“I think it’s pretty clear that on major event days there are going to be some significant choke points that are going to need more thinking and more planning,” said Gilson, who is also a member of the Figueroa Corridor business improvement district.

Early concerns about traffic already prompted project organizers to modify the plan. Those changes, which reinstated an additional car lane that was originally proposed for removal, came after a city traffic study foreshadowed some nasty implications for drivers.

According to the draft environmental impact report for the project, which was prepared in 2010, two key intersections in the corridor are already so snarled that they are considered failed junctions.

The study projected that if the original plan were implemented, the number of failing intersections would rise to 10, and the delays at key stoplights would range from one to eight minutes during peak hours.

Tim Fremaux, an engineer in the bikeways section of the L.A. Department of Transportation, the lead agency on the project, said that after reinserting a traffic lane those delays will be significantly shorter. The traffic study is being revised as part of the preparation of the final environmental impact report that is due for release in May, he said.

The project is funded by Prop1C bond funds, which must be spent by the end of 2014. That means time is of the essence for the project, which is on an “aggressive schedule,” said Smith. She said construction would have to start by January 2014 to meet the deadline.

Additional information on the plan is at myfigueroa.com.