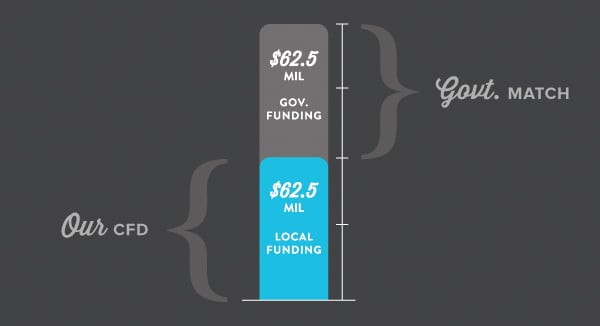 A screen grab from the streetcar page with information on funding for the $125 million project. As of Thursday, Oct. 25, the page mentioned only $62.5 in local funding and a $62.5 million government match. It did not refer to the $85 million that will be on the ballot. 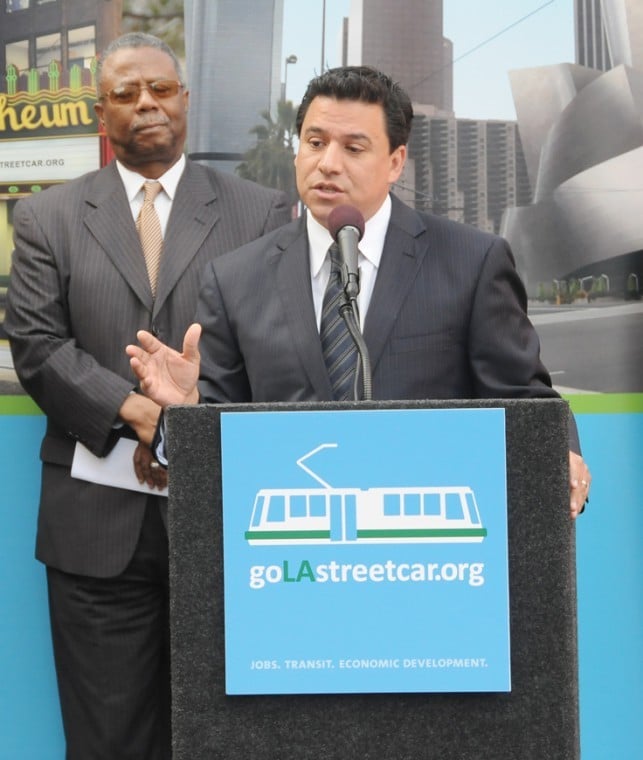 City Councilman José Huizar has long said the public is expected to fund $62.5 million of the $125 million Downtown Streetcar. However, the mail-in ballot that will be voted on next month says area landowners could ultimately pay up to $85 million for the project.

A screen grab from the streetcar page with information on funding for the $125 million project. As of Thursday, Oct. 25, the page mentioned only $62.5 in local funding and a $62.5 million government match. It did not refer to the $85 million that will be on the ballot.

City Councilman José Huizar has long said the public is expected to fund $62.5 million of the $125 million Downtown Streetcar. However, the mail-in ballot that will be voted on next month says area landowners could ultimately pay up to $85 million for the project.

DOWNTOWN LOS ANGELES -Ever since the City Council in July approved a plan to have local land owners help pay for the $125 million Los Angeles Streetcar, proponents of the project have been working hard. They know they need to convince two-thirds of the registered voters in the area to approve the tax in a special vote-by-mail election that starts next month.

Officials with Los Angeles Streetcar Inc., the nonprofit overseeing the effort, as well as 14th District City Councilman José Huizar, who launched the plan, have continuously talked about a crucial figure — $62.5 million. In press materials, on the streetcar website and in meetings with reporters, $62.5 million has been mentioned as the amount of money the public will pay, and that it will fund half of the capital costs of the project, including engineering and construction.

When ballots are mailed to registered voters on Nov. 13, however, they will be asked to approve a much higher amount. In fact, $62.5 million does not appear on the ballot that must be returned to the City Clerk by Dec. 3.

Instead, the ballot says area residents will be voting to tax local landowners up to $85 million. That is $22.5 million, or 36% more than what has been the focus of the campaign for the project.

The higher figure is surprising some Downtown stakeholders who will be asked to pay for the streetcar.

Martin and Hellen, who have a history of tangling with Huizar, have previously criticized the project’s approval process, in which only renters or condo owners who live within approximately three blocks of the tracks will be able to vote. Property owners — including those who control large buildings — who don’t reside in the area are not allowed to vote, even though they will be responsible for paying the tax over 30 years.

Martin said he wasn’t aware that the special election would call for a tax assessment of up to $85 million. Instead, he thought it was the $62.5 million that has been the focus of the campaign.

“I’m actually not that surprised because I think the whole thing has been fraught with subterfuge, misleading promises, and this is par for the course,” he said.

Huizar strongly rejects the notion that the campaign to woo voters has been in any way deceptive or misleading. He and other project supporters instead point out that the proposed assessments have been calculated based on assumptions of $85 million. That amount is what he says would be needed in a “worst-case scenario.” Huizar and others maintain that if less public money is needed, the assessments for Downtowners will decrease.

Much of the information released to date by Huizar’s office and LASI mentions the $62.5 million figure, not the $85 million that will appear on the ballot.

As of Wednesday, Oct. 24, the LASI website page with streetcar funding information mentioned only $62.5 million in government money and $62.5 million in local funding. The $85 million to be voted on was not on the page.

It was missing from other places too: Information sent out by LASI promoting an Oct. 20 movie night — project officials were screening The Goonies in Grand Park — said the election will ask voters to “consider funding $62.5 million of the project’s $125‐million budget.”

Again, there was no reference to the $85 million. Similar information has been sent out by Huizar’s office in official statements about the tax, including a July 31 press release after the council voted in favor of the assessments.

“The streetcar CFD would raise $62.5 million of local funding, with bonds drawn on the total amount,” said the statement (CFD is short for community facilities district, the technical term for the taxing protocol).

Huizar counters that in July the City Clerk mailed out the complete ordinance, which contains the $85 million figure, to property owners and registered voters along the route.

“I think we’ve been putting both numbers out there,” he said. “As I understand it all of the official documents have the $85 million figure.”

However, after being questioned on the matter by Los Angeles Downtown News, Huizar said he would direct the LASI board to make sure the $85 million is clearly detailed and explained on the website. On Thursday afternoon the page was indeed updated to include a reference to the higher figure.

“At the end of the day it doesn’t matter whether it is 85 or [62.5] in terms of what people are focusing on,” he said. “This is a red herring in the bigger scheme of things. It doesn’t affect how much people will be charged.”

The streetcar has long been a dream of Huizar’s, and is the centerpiece of his 10-year campaign to revitalize Broadway. The project, which he hopes will open in 2015, would connect L.A. Live with the Civic Center.

Shiraz Tangri, general counsel for LASI, said the $85 million represents a safety net that also covers the administrative cost of issuing the tax bonds as well as any unexpected construction increases.

“The $85 million is the maximum bond amount,” Tangri said on Tuesday, Oct. 23, before an evening streetcar outreach event at the AT&T Center. “The bond amount is based on the amount of money we need to raise for 50% of the construction cost plus the administrative cost of the bond, plus a reasonable contingency as to how those construction costs could escalate.”

While he acknowledged that the ballot allows for a tax of up to $85 million to be levied on area property owners, he said the assessments discussed so far are based on the higher figure. The result, he said, is that people could pay less than what they have heard so far.

According to figures provided by LASI, if the measure passes then property owners — whether of a condominium, an entire building or a lot — would pay from 16 to 45 cents per square foot, with the highest rates for those right along the route.

The average condominium owner would pay about $60 per year, with the majority of residential units taxed less than $100 annually. Commercial building owners would pay far higher amounts.

“We’re expecting that the numbers we are rolling out to people based on that maximum amount, based on very high bond rates, are actually overly conservative numbers and what people will actually see should be substantially less,” Tangri said.

Whether that is possible is unknown. Two times already project officials have applied for federal grants. They were turned down both times.

Even if the $85 million was not on the website or in press releases, Tangri maintained that it has been included in city documents. He also said the figure has been discussed with property owners during public streetcar events when people ask about funding.

“I don’t think it’s misleading,” he said. “I think what people want to know and what we’ve been disclosing is what it will cost them. We’ve been up front with property owners and with all the voters at all these events as to what that will translate into.”

The difference between the generally discussed figure and the ballot amount has rankled some Downtowners. They include Paul Rutter. The co-chief operating officer of Thomas Properties Group, which owns City National Plaza on Flower Street along the tax district, said that until a call from Downtown News, he believed voters would be deciding on a $62.5 million tax.

“I would say it’s disappointing to see that kind of major increase in the scope,” he said.

The concern was echoed by Laurie Sale, whose family owns property along Los Angeles Street. She opposes the tax on property owners and was tapped by the city to write the ballot argument against the measure.

She too was unaware of the $85 million ballot figure until being informed of it by a reporter.

Bob Stern, the former president of the recently closed Center for Governmental Studies, was less concerned by the difference.

“It’s what people see on the ballot that matters,” he said.

He also said that streetcar proponents are doing the right thing by planning for the worse case scenario and asking for more money than they may ultimately use.

“That’s the responsible thing to do,” he said. “No one is going to complain if they end up paying less.”

The results of the vote are expected by early December.