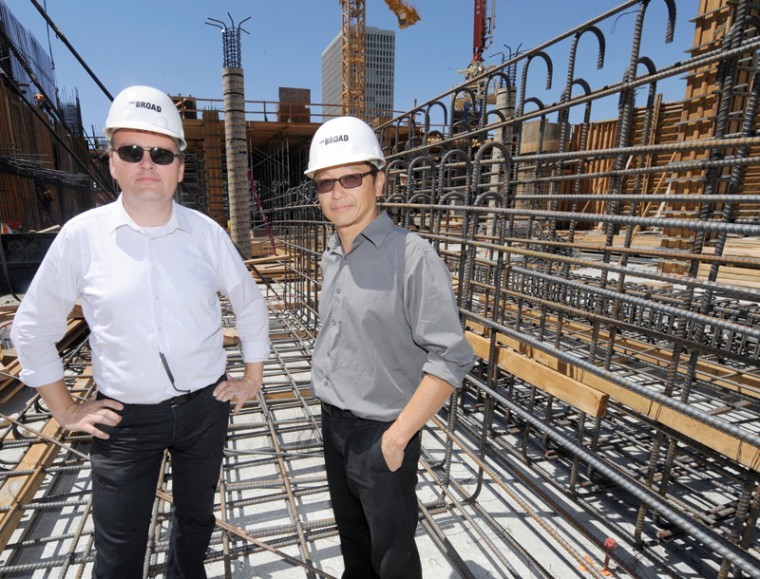 Kevin Rice (left) of Diller Scofidio + Renfro and Gensler’s David Pakchong are overseeing the construction of The Broad. The $100 million Grand Avenue museum presents a series of tricky architectural and structural elements. 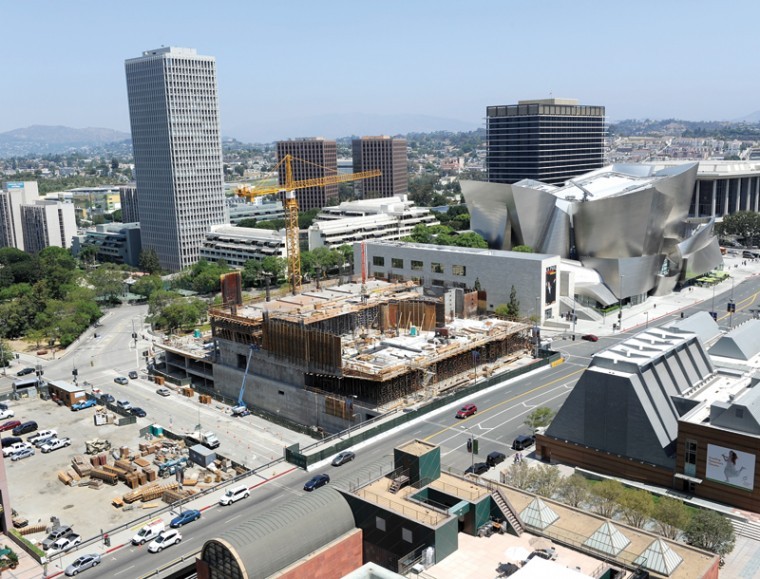 Since breaking ground in March, crews have completed about two-thirds of the work on the main building. The web-like “veil” will come in November. The museum is slated to open in late 2013. 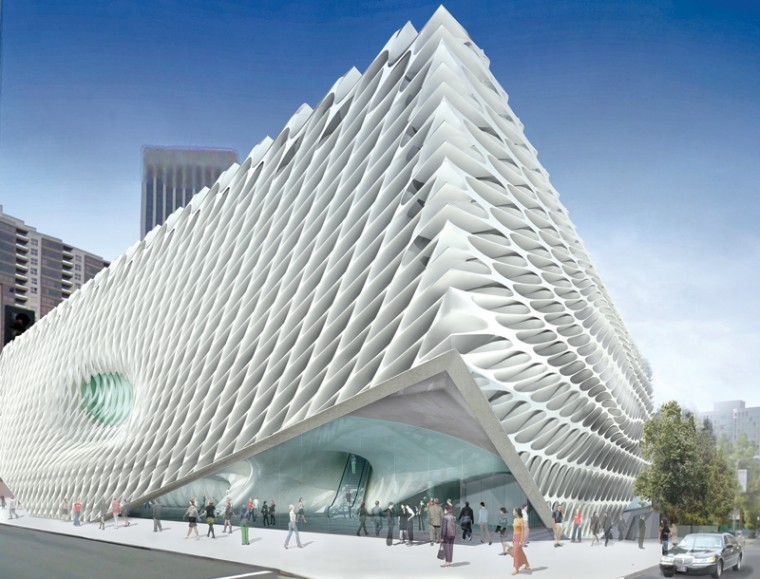 The design features a honeycomb-like exterior structure that will be made from a special glass fiber reinforced concrete.

Kevin Rice (left) of Diller Scofidio + Renfro and Gensler’s David Pakchong are overseeing the construction of The Broad. The $100 million Grand Avenue museum presents a series of tricky architectural and structural elements.

Since breaking ground in March, crews have completed about two-thirds of the work on the main building. The web-like “veil” will come in November. The museum is slated to open in late 2013.

The design features a honeycomb-like exterior structure that will be made from a special glass fiber reinforced concrete.

DOWNTOWN LOS ANGELES - For architect Kevin Rice, the simplest way to explain the central design concept of Eli Broad’s $100 million Grand Avenue art museum involves making a clenched fist with one hand and a claw with the other.

Rice, a senior associate at the New York architecture firm Diller Scofidio + Renfro, the designer of the under-construction project, would instruct you to clench your fist and place it palm-side down on a flat surface. Then, tilt your knuckles up at a slight angle. Spread the fingers on the other hand to form a claw and let it hover over the fist.

The claw represents what DS+R terms “the veil,” an undulating, honeycomb-like exterior that will shroud the three-level structure. The interior mass (that’s your fist), which is dubbed “the vault,” is a concrete anchor that, thanks to some tricky architecture and engineering, will appear to float above much of the ground floor while providing a platform for the third-floor main gallery.

While the design lends itself to the simple hand-over-fist demonstration, the project is in fact quite complex, Rice said.

“There are more structural engineers involved in this project than any project I’ve ever been involved with,” Rice said during a recent tour of the construction site.

After breaking ground atop a recently completed three-level parking facility in March, crews are now about two-thirds of the way finished with the main structure. Work on the veil is expected to start in November.

The main structure is complicated to build for several reasons, but chiefly because of its unique shape. Its base is a concrete form that rises from the center of the plot and stretches out toward Grand Avenue at an angle to create a cantilever, or overhanging ledge. A dramatic cantilever is also the featured “wow” element of DS+R’s acclaimed Institute of Contemporary Art building in Boston.

In the early stages of construction at The Broad, people walking by the structure just south of Walt Disney Concert Hall could glimpse angled wooden forms rising from the ground. Now, the extended ledge is supported chiefly by a temporary forest of metal poles. Eventually, those will be removed, resulting in the massive overhanging slab that appears to float above what will be the museum lobby. The top side of the slab will also function as the base for the second floor.

From an engineering standpoint, the slab, which was poured in May by 200 cement trucks that worked an 11-hour overnight shift, is challenging because it lacks permanent vertical support columns — hence the temporary metal poles.

Eventually, support will come from metal chords, known as post-tension cables, that run horizontally through the slab. They will stretch from the edge of the overhang, passing through pre-cut tubes in the slab to a steel anchor in the building’s center. There, they will be winched tight.

“The cables are needed to minimize the weight of concrete,” said David Pakshong, project director for Gensler, the executive architect on The Broad. “If you didn’t have them, then you would have to make the slab even thicker, but that would be essentially impossible to build.”

At some points, the overhang stretches 60 feet from the building’s center, and measures about 12 inches thick at the edge. At the center, it is five feet thick, Rice said.

When it opens in late 2013, The Broad will house and exhibit portions of the businessman-turned-philanthropist’s 2,000-piece private collection of works by the likes of Jeff Koons, Andy Warhol and Jasper Johns.

In addition to creating a striking design, the porous veil will limit the amount of natural light in the gallery, helping to preserve the artwork. It will also allow museum patrons to see outside, and passersby on the street to peer in.

The structure is intended in part to contrast with the smooth, shiny surfaces of neighboring Disney Hall, Rice said. Instead of a building that invites and reflects light, The Broad’s veil will seem almost to contain light, he said.

“The challenge was how do you build a box next to Disney and hold your own with something that has a conversation with Disney but isn’t secondary to it or just background to it,” he said.

Aesthetically, the veil may seem simple. It is, after all, basically a box that will be fabricated elsewhere and lowered in pieces over the museum structure.

Again, what sounds simple has proven to be anything but. Since the design was first presented, the engineering plans for the veil have completely changed.

Initially, DS+R planned to make the veil from precast concrete. It was also expected to serve an important structural role, helping to support the rest of the museum.

Precast concrete, however, proved too heavy, Rice said. It would also have been prohibitively expensive considering that the veil will be comprised of 4,000 panels that feature 400 different shapes, each a slight variation on a narrow oval. Instead, the veil is now slated to be fabricated by German company Seele from glass fiber reinforced concrete, a lighter material with the finished consistency of fiberglass.

Engineering and other architectural modifications have also resulted in a fine-tuned design that no longer calls on the veil to provide a major support role. The 75-foot-tall honeycombed walls’ chief structural obligation is simply to hold themselves up, Rice said. They must also be connected to the building and ground in ways that will lend flexibility during earthquakes. Along Grand Avenue, the veil will stretch to the ground and dig beneath street level, where it will sit on a type of earthquake-safe rocker, Pakshong said.

Beyond the various teams of construction sub-contractors, the job bears the fingerprints of some 40 consultants — specialists in lighting, security, art storage, audio/visual infrastructure and mechanics.

Like many big jobs, it is also a joint effort between a design architect, DS+R, and an executive architect. If DS+R is the creative brain trust behind The Broad, then Downtown-based Gensler, which has worked on projects including the Convention Center hotel and the FIGat7th shopping center, is the expert in developing complicated buildings in Los Angeles, Pakshon said.

“The veil has a design intent that very few people engineering it would understand,” Pakshong said. “There is a design component, a fabrication component, an engineering component and a materials component. Everyone brings their expertise to the table.”