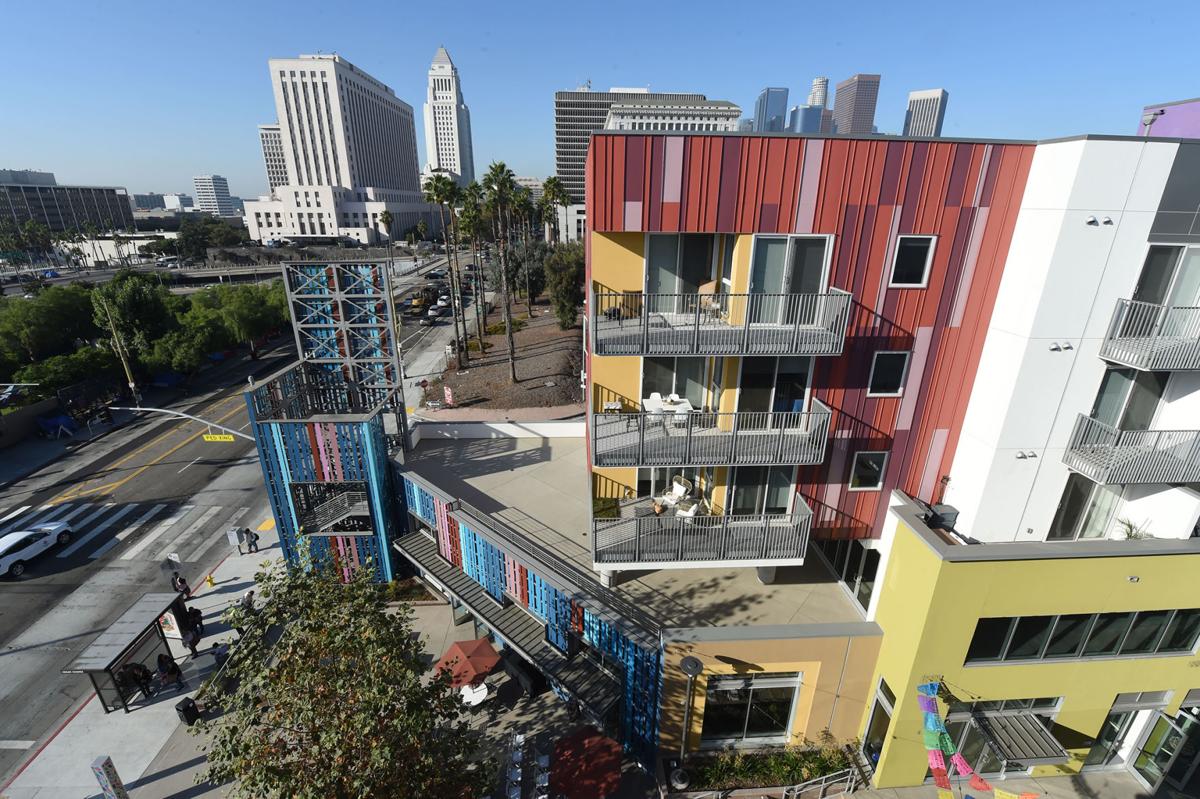 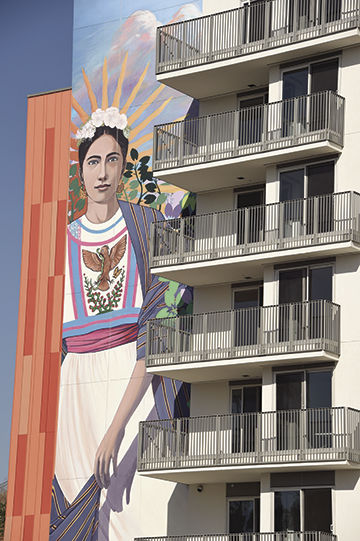 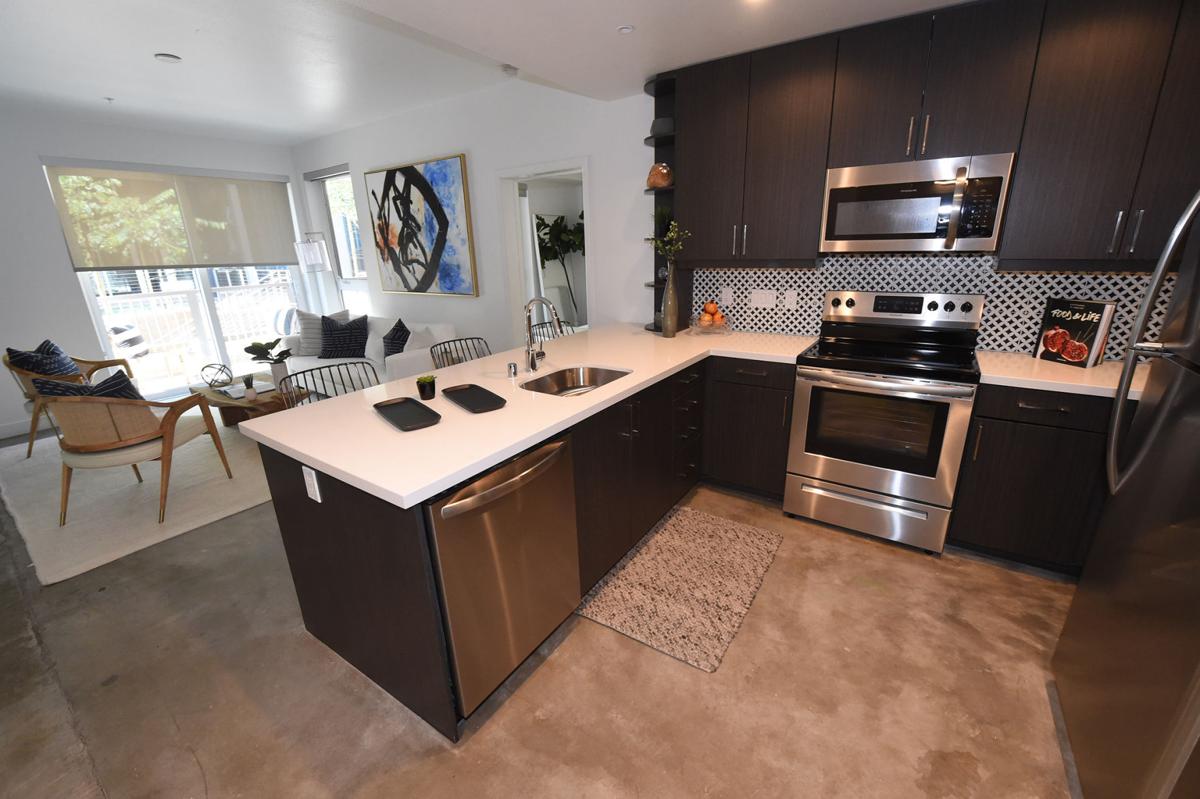 Massive glass and steel structures are rising across Downtown, marking a noticeable change for the once sleepy region of Los Angeles, but the El Pueblo area has largely been left out of that development boom.

That all changed on Thursday, Sept. 12, with the grand opening of LA Plaza Village, a 355-unit housing complex comprising four buildings straddling Broadway between Chinatown and El Pueblo.

“There has been tremendous growth throughout the rest of Downtown but this area was neglected,” said John Echeveste, CEO of LA Plaza de Cultura y Artes, the Mexican-American museum in El Pueblo and one of the partners in the development. “This is going to bring new life to the area. We have a good mix of residents that are living here, we’re going to be shopping locally on Olvera Street and attending programs at the museum. It helps to just revive this entire El Pueblo area.”

Inspired by the look and feel of a traditional Mexican hillside village, the $160-million mixed-use LA Plaza Village stands out amongst Downtown’s other housing developments, with its colorful exterior that utilizes 31 different colors, as well as four large murals that adorn the sides of some of the buildings.

Brad Cox, senior managing director for Trammell Crow Co. said that part of the team’s goal, was to integrate the project into the historic El Pueblo area.

“The history of this area is phenomenal,” Cox said. “We did a lot of research before the start of this project and we wanted to be sensitive to the surrounding area. Creating a Mexican villa with vibrant colors was one the key design elements of the project.”

Downtown-based architecture firm Johnson Fain handled that design. Tenants began moving into the first building in February, with the second building opening to residents last month. The last two opened Sept. 12. The project is currently about 59% leased, with retail close to 40% leased.

The project has studio to three-bedroom apartments. All of the units include stainless steel Frigidaire appliances, in-unit laundry machines and vinyl or polished concrete flooring. Most units include balconies and about 70 of the units are set-aside for people who make 60 to 80% of the area median income. A 473-square-foot studio starts at $2,050.

Rents at LA Plaza Village average about $3.50 per square foot according to Steve Basham, managing analyst for the real estate firm CoStar. Basham said that the prices are slightly above the prices at Chinatown’s Blossom Plaza, a 237-unit complex that opened in 2016 next to the Chinatown Metro Station, but added that finding a benchmark for LA Plaza can be difficult due to a lack of new construction in the area compared to areas like South Park and the Arts District.

The development includes a large pool deck, a two-level gym, a yoga studio, a grooming station for pets and a community space for the tenants. The ground floor will house retail, including a 24/7 CVS and an unannounced restaurant.

Basham did note that for the right resident, LA Plaza’s proximity to Union Station could be a big draw.

“A lot of the most successful projects this cycle have been transit adjacent,” Basham said. “Anyone who lives in Downtown will be able to tell you, if you can improve my chances of getting around without a car Downtown, that’s huge.”

Cox said that the connectivity with Union Station was another key component of the project.

“The beauty is, you walk across a block and half from here and you can virtually go anywhere in the United States,” Cox said.

The 425,000-square-foot project comprises four five-to-eight story buildings and is arranged with Broadway bisecting the complex. It is the culmination of nearly six years of work for the development team and was designed to benefit the LA Plaza de Cultura y Artes Foundation, which runs the museum in Downtown.

Under the deal approved by the County in 2014, the County leased two surface lots for $1 a year to the LA Plaza Foundation. The Foundation then subleased to a developer for $250,000 a year during the construction process, and a portion of the income generated by the property afterwards. The project broke ground in 2016.

Echeveste said that he hopes that the model used for LA Plaza Village becomes more common with other cultural institutions.

“It is an interesting concept that works for everyone really,” Echeveste said. “The county benefits, we benefit, the developer benefits.”

An Energetic History 'For Morons': John Leguizamo's One-Man Show Arrives at the Ahmanson

A paseo that runs from the Fort Moore Pioneer Memorial monument on Hill Street, through the complex to Spring Street, was also installed. LA Plaza de Cultura y Artes plans to extend the paseo by running it through to Union Station.

In addition, the Cesar Chavez Foundation also plans to open its new headquarters at the site, on the western side of Broadway, in the near future.

The significance of moving the headquarters to Los Angeles, which played a major role in Chavez’s community organizing efforts, was not lost on Alfredo Izmajtovich, executive vice president of CCF’s Housing and Economic Development fund.

“The museum and the county, and all of us really want to help highlight the contributions of Mexican Americans to Los Angeles,” Izmajtovich said.

Another aspect of the development is its high level of cultural and artistic integration, including four large public murals that can be viewed around the development.

Designed by local Chicano and Chicana artists, the four murals vary in size and design, and were installed over the final months of construction. Each mural can be found on Broadway and were either hand painted onto the wall, or digitally reproduced onto vinyl and hung at the complex.

The largest of the murals, Judithe Hernandez’s “La Nueva Reina,” stands seven stories tall and overlooks the Hollywood Freeway. The mural depicts the city’s patroness, Nuestra Señora la Reina de los Angeles, with her back to a blue sky while wearing a veil that’s filled with moments from Los Angeles history.

“I believe that public artists are entrusted with the unique responsibility to frame their artistic vision to reflect a community’s collective perception of a moment in time,” Hernandez said in a prepared statement. “It is my hope that ‘La Nuestra Reina’ will come to embody this moment and become a visual memory of Los Angeles for all who see her.”

Artists José Lozano, Barbara Carrasco and Miguel Angel Reyes were responsible for the other three murals.

In addition, LA Plaza de Cultura y Artes plans to open La Cocina, the first museum and teaching kitchen dedicated to Mexican American cuisine, on the ground floor of the building along Spring Street in 2020. The location was originally expected to open in tandem with LA Plaza Village but design and construction hurdles extended the project to next year.

Crews expect the Union Station paseo to be completed in October.