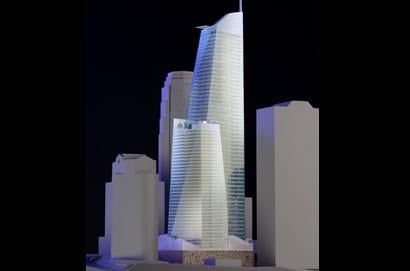 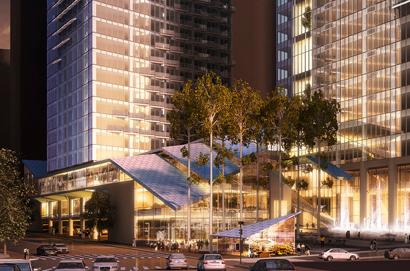 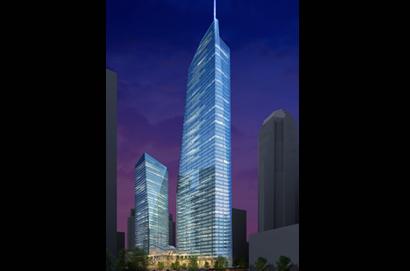 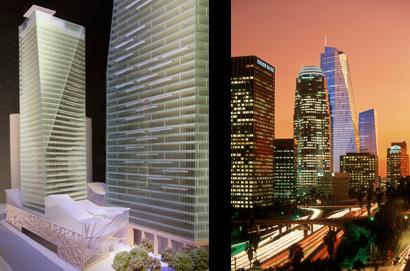 A $1 billion plan by Korean Airlines, working with Thomas Properties Group, would create 40- and 60-story towers where the Wilshire Grand hotel now stands. Officials hope to break ground in 2011. Renderings by AC Martin Partners.
1 of 4

DOWNTOWN LOS ANGELES — The Wilshire Grand, which for 57 years has stood at the corner of Seventh and Figueroa streets, will be torn down and replaced with a $1 billion luxury hotel, office and residential complex, officials with property owner Korean Air announced Thursday.

The 1.7 million-square-foot development would change the skyline of Downtown Los Angeles, rising less than a mile north of the Convention Center and L.A. Live, where a 1,001-room Ritz-Marriott hotel is scheduled to open in 2010.

Preliminary plans call for a 40-story tower housing approximately 700 four- or five-star hotel rooms and 100 residences, plus a 60-story office tower. The towers would rise on a full city block bounded by Figueroa, Francisco and Seventh Streets and Wilshire Boulevard.

The Downtown-based Thomas Properties Group will spearhead the design, development and leasing.

The project is expected to break ground by 2011. Construction would take up to three years. Financing is not in place yet, though Korean Air Chairman and CEO Y.H. Cho said last week that a couple of large Korean banks have expressed interest in the plan.

Thomas Properties Chairman and CEO Jim Thomas declined to say how much he might need to seek in construction financing because it is premature. But he expressed optimism that by the time the project receives all the necessary city approvals, which could take 18 months, the frozen credit markets will have loosened up.

“The country’s going to be in a world of hurt if, a year and a half from now, we haven’t fixed the credit markets,” said Thomas. “We have a high degree of confidence that the credit markets will be flowing by the time we’re ready to proceed.”

If not, he said, the project could be built in multiple phases. Currently it is all anticipated to rise at once.

Jack Kyser, chief economist with the Los Angeles Economic Development Corp., agreed that the credit markets will likely be in better shape within a couple of years. Still, he said, the developer will have his work cut out for him.

“I think the hotel is going to be very positive,” Kyser said, but “people might question the office side of it.”

Korean Air, one of the largest global airlines, purchased the building that houses the 16-story, 900-room Wilshire Grand in 1989.

At the time, the hotel at 930 Wilshire Blvd. was a Hilton. It was later operated by the Omni Hotels chain before becoming the Wilshire Grand in 1999. Korean Air has made several upgrades to the property, most recently a $40 million renovation launched in 2005.

Cho said last Thursday that despite the improvements, the 1950s-era hotel is past its prime. “It is not economically feasible to keep renovating,” he said. “It’s time to redevelop the building.”

Thomas Properties was selected to develop the property last May, after a competitive bidding process. Cho would not reveal how many companies vied for the job.

Though still in the early planning and design stage, preliminary renderings of the project by Downtown architecture firm AC Martin Partners depict two soaring, glass-enclosed towers adorned with ground-level greenery. An 18,000-square-foot landscaped park and plaza would be at the corner of Seventh and Figueroa streets, and the buildings would house ground-floor retail.

A below-grade parking structure would accommodate up to 1,700 spaces.

Cho said he is negotiating with several four-star or higher hotel operators. Korean Air also owns three hotels in Korea and another in Hawaii, he said, “so we have a good knowledge and good access to many prestigious hotel management companies.”

Thomas and Cho said they are highly optimistic about the hotel component, largely because of the property’s proximity to the upcoming Ritz-Marriott at L.A. Live, which has already provided a boost to Convention Center bookings in the coming years.

“I don’t worry about the competition,” said Cho. “More quality hotels attract more people to conventions, and a higher quality of conventions.”

“They should complement each other,” said Baltin, who has consulted on the Wilshire Grand project. “The better the overall hotel stock, the better it’s going to be for everybody. Convention planners love a concentration of good hotel rooms.”

Baltin and Kyser both pointed to San Diego, which has a 1,600-room Hyatt, a 1,300-room Marriott and a 1,200-room Hilton near its convention center, as a model for Los Angeles

“The Wilshire Grand was a very old hotel,” Kyser added, “and it had small rooms. It started as a traveler’s hotel, so you didn’t have all the amenities you have now. We could use another big hotel Downtown.”

The office component of the development could be a riskier proposition.

According to Kyser, Downtown’s office vacancy rate stands at 13.8%, higher than the county average of 12.2% By comparison, office vacancy on the Westside is 11.1%

However, Kyser noted, the completion of the under-construction Gold Line extension and the Expo Line should provide the area with a boost. The Wilshire Grand site also stands across the street from the Seventh Street Metro station, which serves the Red and Blue lines.

“This gives Downtown the larger mass transit draw, which is important if you’re trying to develop your workforce at all levels,” said Kyser. On the office front, he continued, “There’s potential Downtown. It has a lot of amenities, and it has the best mass transit access.”

Thomas, who has developed more than 5 million square feet of high-end Downtown office space, including the Wells Fargo Center, U.S. Bank Tower and the Gas Company Tower, said he expects to be able to pre-lease at least 50% of the office tower before construction begins, which should help entice lenders. By the time construction is finished, he said, he hopes to have up to 80% of the building leased.

“I’m absolutely convinced that Downtown Los Angeles is going to need a new office tower in the next three to five years,” said Thomas. “What we’re doing is extremely timely.”