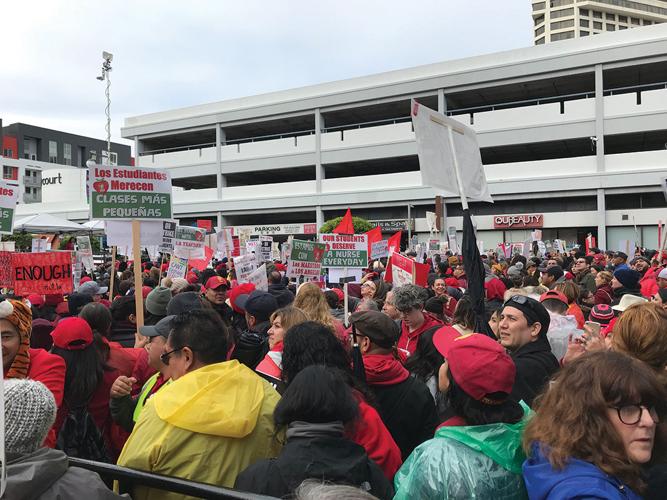 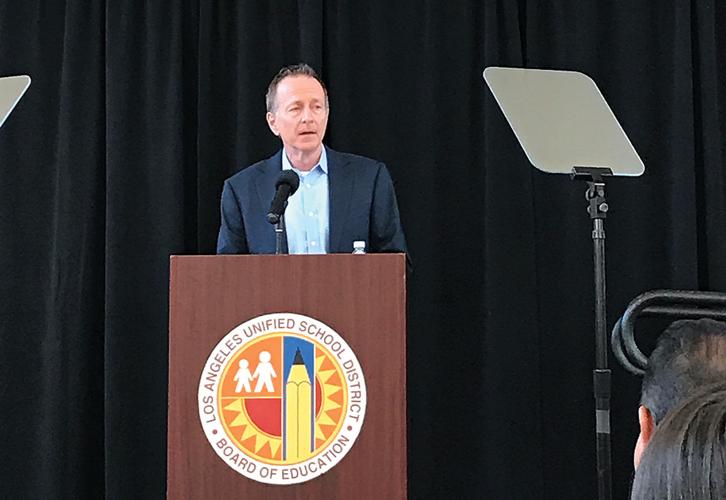 LAUSD Supt. Austin Beutner is among those pushing hard for voters to pass Measure EE next month.

DTLA—The sides are being drawn. Past enemies are forging unlikely alliances. The outcome of the battle will impact the lives of hundreds of thousands of innocent people.

“Game of Thrones”? Yeah, that too, but I’m pretty sure the HBO series is pretend. Instead, I’m looking local, as some of Los Angeles’ savviest and most cutthroat power players are girding for a fight over the funding of public education. It may lack the worldwide audience you get with premium cable, but the conflict between what one could term the Education Alliance and the Business Brigade makes the Winterfell Partnership vs. the Night King’s Army look like a group of fourth graders having a Nerf fight.

Game of Thrones Characters and Their City Hall Counterparts

The battle is over Measure EE, a parcel tax that seeks to raise up to $500 million a year to benefit the cash-strapped Los Angeles Unified School District, and it has divided parties that normally play nicely together. As a June 4 special election approaches, the rhetoric will ratchet up and spending will be ginormous. I shudder to think how many trees will be murdered for the cascade of glossy mailers.

One Strike and We're All Out

As the consultants are hired, the in-house polls conducted and the advertising campaigns wheeled out, nothing will be left to chance. Every political chit ever pocketed will be called in as the leaders of the warring factions warn their supporters against sitting this one out or trying to straddle the fence. Almost anyone with a checkbook and a record of past political donations will be conscripted.

How will this end? That’s like trying to guess which “Games of Thrones” characters will die before the final season finishes. About the only thing certain is that, after the polls close and the votes are counted, bodies will litter the ground, and the leaders of the losing side will suffer the consequences.

For those who have been paying only moderate attention, Measure EE is a parcel tax that, if passed, will charge people 16 cents for every square foot of indoor property they own. The cash will help cover a financial shortfall at the LAUSD, where revenues are going down and expenses, partly because of pension and healthcare payments, are going up. Leaders including Superintendent Austin Beutner are (rightfully) complaining that Sacramento doesn’t send enough money out to school districts, and they’ll be lobbying Gov. Gavin Newsom and the legislature to change the spending formula to benefit the 500,000 K-12 LAUSD students. But they also need buy-in from the local populace.

The Los Angeles business community likes EE about as much as most people like chicken pox. The business bigwigs might have given grudging support to the measure if the funding mechanism was a flat tax where all property owners pay the same amount, no matter the size of the parcel. However, the per-square-foot calculus, which means a big hit for some building owners, is a no-go. Deep-pocketed groups such as the Los Angeles Area Chamber of Commerce, the Valley Industry and Commerce Association, the L.A. County Business Federation and the Coalition of Really Rich Jerks (I made one of those up) have already begun to fight.

The early June timing is both odd and 100% intentional. It stems from the six-day January teachers’ strike, when 30,000 red-bedecked educators and supportive parents marched in the rain and chanted and rang cowbells at rallies, capturing national attention, including for the union United Teachers Los Angeles. While LAUSD and union brass always knew that some sort of public tax is needed to help pay for district salaries, class-size reductions and more, the walkout had a catalytic effect. After it was resolved, Beutner, UTLA and Mayor Eric Garcetti, who played peacemaker during the strike, recognized that the honeymoon of widespread support might be short. They decided the best tactic was to carpe diem and schedule a special election, rather than wait for a regularly scheduled vote.

They picked June 4, the final Tuesday before the end of the LAUSD year. Nothing happens by accident.

If regular voter turnout in Los Angeles is paltry, then participation in special elections can be downright anemic. The pro-EE team is banking that with enough money and momentum, they can get sufficient people to the polls to eclipse the two-thirds majority required to pass a tax. This is where UTLA’s membership base and its army of supporters and organizers will be vital. The union has already dropped $500,000 on the Yes on EE campaign (according to documents filed with the City Ethics Commission). An additional $300,000 came from SEIU Local 99, a union that represents tens of thousands of other LAUSD employees.

What makes things really interesting is the unlikely bedfellows. During the strike Beutner and UTLA head Alex Caputo-Pearl tangled like the cloaked figures in the “Spy vs. Spy” comics. Now they need each other.

Caputo-Pearl and the union were particularly venomous during the strike, lambasting Beutner and pillorying Eli Broad, the philanthropist who is a noted supporter of charter schools. But Broad, an ally of Beutner, this month donated $250,000 to the Yes on EE cause, and I didn’t see any union complaints. Another $500,000 came from Steve Ballmer, the Clippers owner who is also a friend of Beutner.

In other words, some of L.A.’s most affluent and influential business leaders are on one side of the divide, where they are partnering with the unions, while the other side holds the business lobbying groups. That team is also ready to fight, as Realtors organizations have ponied up more than $200,000, which I write because it’s fun to use “pony” as a verb. Another $200,000 has come from committees affiliated with the Howard Jarvis Taxpayers Association.

The business groups are sharpening their swords and perfecting their message. The L.A. Area Chamber, under new leader Maria Salinas, has been sending out missives; a March 27 mailing warned, “Measure EE will place a significant tax burden on property owners and renters, who are already facing an affordability crisis.”

By the by, over a month before election day, more than $2.5 million has already been raised. The final few weeks of an initiative campaign is usually when the big cash comes.

The most interesting player in the battle is Garcetti, and if you work the “Game of Thrones” theme, he’d be the impassioned Jon Snow, leading the troops into the fight (this would turn either Beutner or Caputo-Pearl into Daenerys Targaryen, aka the Mother of Dragons, so I admit maybe I haven’t fully thought this part through).

Garcetti lobbied hard for EE in his State of the City speech on April 17, and he’s clearly willing to expend political capital on the effort. This is curious for a few reasons, including that, for about the first five years of his mayoralty, Garcetti seemed oblivious to the fact that Los Angeles has a school district. I know he’d reject the assertion that he ignored education, but publicly he was very quiet, including when LAUSD was picking a superintendent; past mayors involved themselves much more heavily in education matters.

Garcetti has traditionally been able to rally both business and labor leaders to causes of mutual benefit, including efforts to pass measures in support of mass transit and raising funds to address homelessness. So the fact that business leaders are combatting him forcefully is striking. Most observers would expect a behind-the-scenes agreement so that even if the business groups do not embrace Measure EE, they’d agree not to fight it. But that’s not happening.

This is where the business sector has an angle. Although the Yes on EE campaign has a lot of teachers and others who will be inspired to vote, the squad fighting the measure only needs to get just over one of every three people to say no. Normally finishing with 34% of the ballot is a colossal loss. Here it would mean a resounding victory.

A lot will happen between now and election day. More money will roll in. The chasm between the mayor and the business community will widen. Someone might even remember to mention the students.