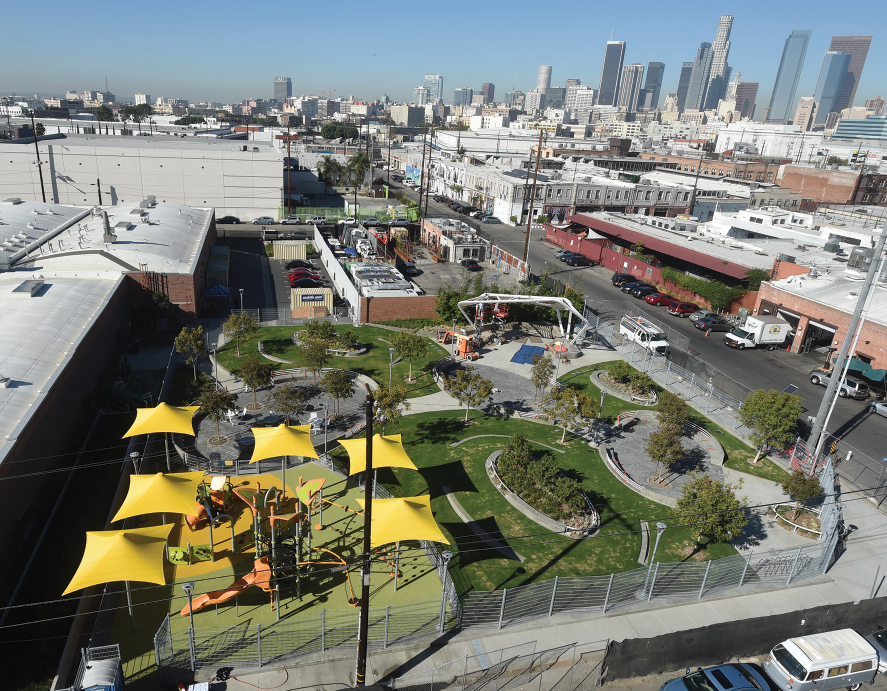 The new Arts District Park features a children’s playground, a performance space and plenty of tables and benches for people to gather. 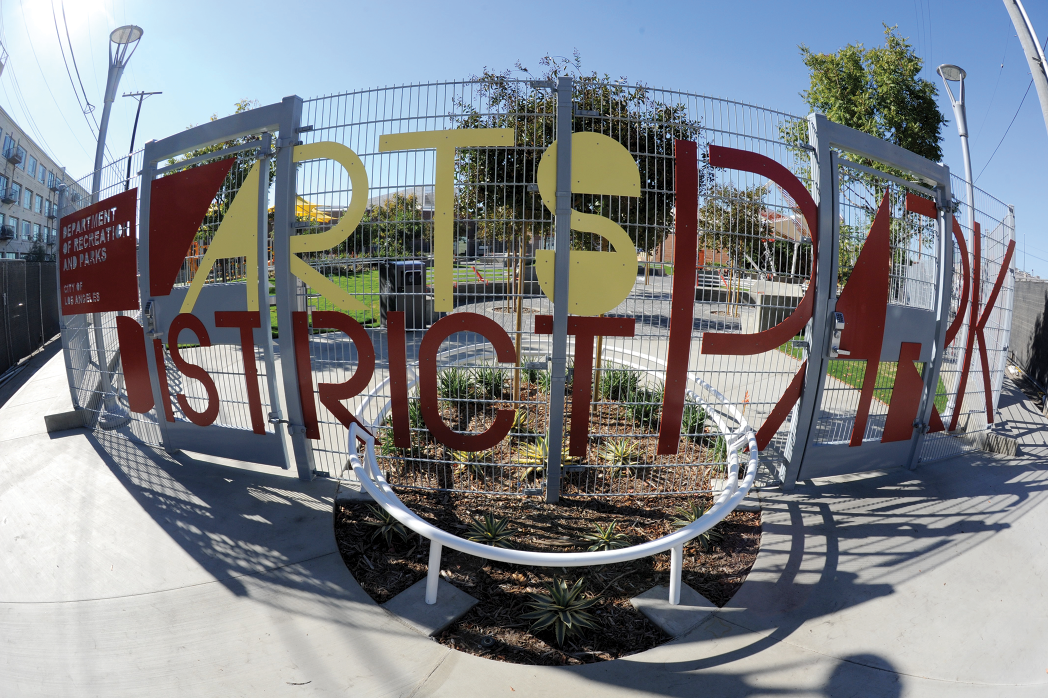 After the CRA was dissolved, Council District 14 stepped in and worked with city departments to fund the $1.6 million park with Quimby fees. 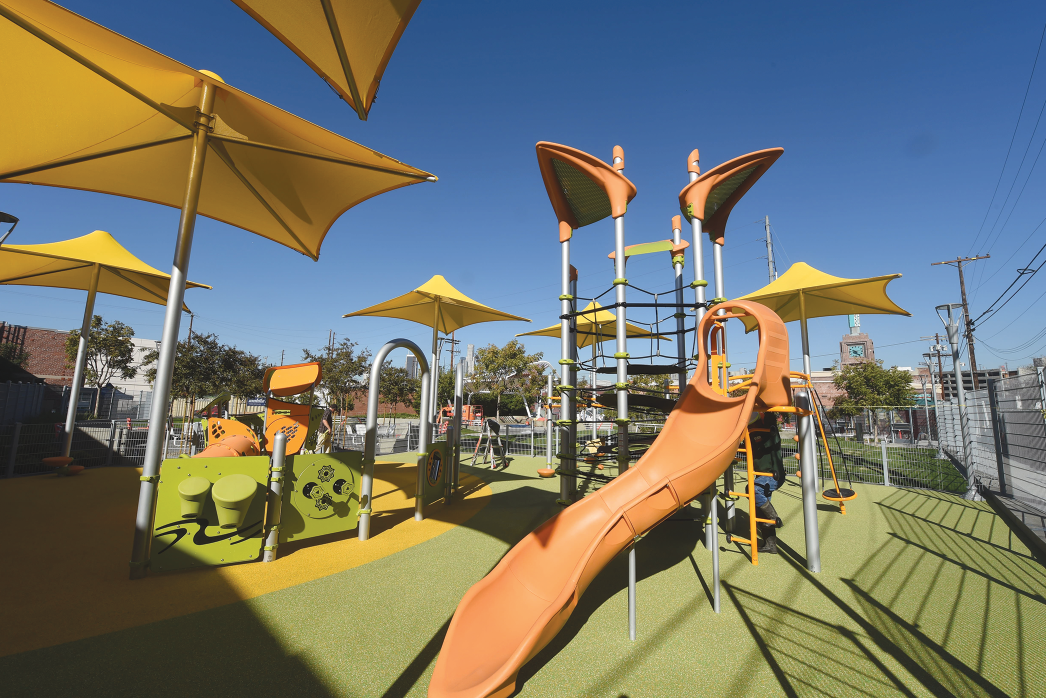 Along with a performance space, benches, and trees, the Arts District Park has a children's playground in the southeast corner. 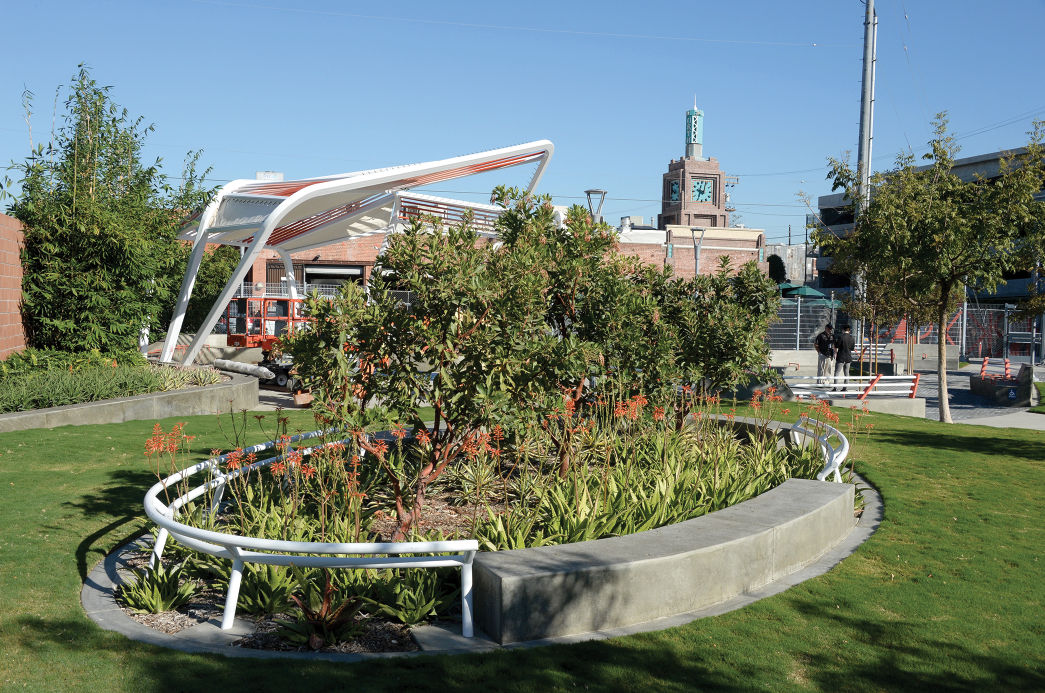 DTLA—The Arts District is in the midst of an unprecedented residential burst. The 320-apartment Garey Building opened in July. At 950 E. Third St., a mega-development with 472 rental units is under construction. In September, plans were unveiled for a $2 billion development highlighted by a pair of 58-story towers. The list goes on and on.

Those projects are bringing thousands of new inhabitants to the neighborhood. What they are not delivering is public green space for those people to gather. That is partly why a park that opens tomorrow is so eagerly awaited.

On Saturday at 1 p.m., a cadre of local and city officials will join with area leaders to cut the ribbon on the $1.6 million Arts District Park. The half-acre space with a design from the Bureau of Engineering with John Friedman Alice kimm Architects at 501 S. Hewitt St. includes a children’s playground, a mural wall and a bandshell-style shade structure that covers what can serve as a performance area. There are also benches and tables.

“It’s a fabulous win for the community,” said 14th District City Councilman José Huizar, who worked to get funding for the project. “These public amenities go a long way. In an area like this, where the Arts District is transitioning to residential and you have thousands of more people visiting, it makes it more livable.”

Reaching the ribbon cutting has not been easy. The park was originally envisioned as part of the La Kretz Innovation Campus, which opened this spring. It was to be funded by the Community Redevelopment Agency, but that source dried up in 2011 when Gov. Jerry Brown announced he would abolish CRAs across the state.

[Inside a New Tech Incubator]

“It was written off, between the CRA and all of the other obstacles that came with the CRA dissolving,” Huizar said.

Huizar’s office worked with the Department of Recreation and Parks to secure Quimby fees, which are paid by developers for site acquisition and park creation. Community design workshops were held, and a groundbreaking took place on Dec. 13, 2014. Progress was expected to be quick, with an anticipated opening the following summer.

An unexpected delay arrived a few months later, when contaminated soil was found on the site. Additionally, crews discovered roller skates, pieces of clothing and other items from the late 1800s. Among the finds were medicine bottles to treat gonorrhea, along with women’s stockings, prompting speculation that the park site might once have housed a brothel.

The soil was cleaned and work was able to resume. That led to the current project, which is laid out with an emphasis on circles — the paved areas make three arcs across the space, while grass and tree-covered portions are also set up in rings.

“It’s terrific to get some green space in the community,” said Jonathan Jerald, the secretary of the Los Angeles Downtown Arts District Space, a nonprofit focused on providing resources to local artists.

At the same time, he noted a bittersweet element, saying that many longtime artists have left the area due to rising rents. New projects have brought in residents who were not a part of the previous artistic community.

“Green space is important, but even more important to me is trying to hang onto those things that gave the Arts District its value to the city,” he said.

Others are looking more toward the future. Anais Engle, who works at the nearby Los Angeles Cleantech Incubator on the La Kretz campus, and was strolling by the park site this week, said the new attraction offers a chance to bring the community together.

“It’ll be nice to have an opportunity to eat outdoors and meet some of the neighbors,” she said.

Chief Deputy City Engineer Deborah Weintraub said that although a half-acre might seem relatively small, it works well for a park. She added that the community meetings helped planners maximize the space for public uses, and that the playground will serve the growing number of families settling in the area.

Ramon Barajas, assistant general manager with the Department of Recreation and Parks, said the park will be open from sunrise to sunset, and that department staff will be on hand every day to oversee the attraction.

Dogs are allowed in the park, though they must be kept on leashes the entire time. They are also allowed on the grassy areas.

The park was designed with sustainability in mind, with a particular emphasis on conserving water amid the ongoing drought. Weintraub said the paved portions of the atraction are relatively shallow and are designed to collect rainwater and allow it permeate the surface. Additionally, 10%-15% of the water needed for irrigation is captured from the La Kretz campus and is stored in a cistern.

Weintraub said the Bureau of Engineering also made sure that all the plants in the park are what she termed “California friendly,” meaning they require relatively little water. That said, the park includes traditional Bermuda grass, which does require regular watering.

Last week, the only feature left to install was the mural; the local organization Art Share L.A. is organizing a vote among several designs. Eventually the winning selection will be mounted on the wall next to the shade structure. The art will remain for a year, and then a new work will be chosen.

The park sits amid an area that is becoming increasingly busy. Fifth and Hewitt holds popular spots such as Urth Caffé and the bar and music venue Resident. The park is close to the Barker Block. Other nearby residential projects include a planned 310-unit project from Bolour Associates at 527 S. Colyton St. and Maxxam Enterprises’ proposed 172-unit live/work development at 676 S. Mateo St., both of which are awaiting approval from the city.

[SunCal's Sixth & Alameda Is The Biggest Arts District Development Yet]

Huizar said the park is just the first step in adding more community space and pedestrian elements to the Arts District. With the area expanding, he said it is critical to find additional places for people to gather.

Still, people are happy with the first step, even if it took a lot longer than expected.