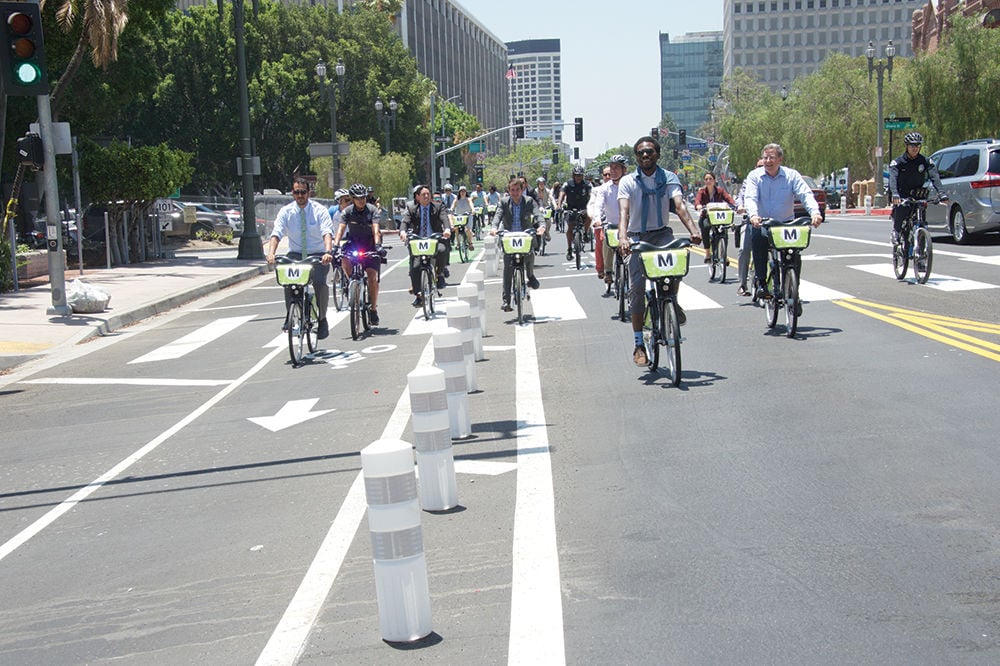 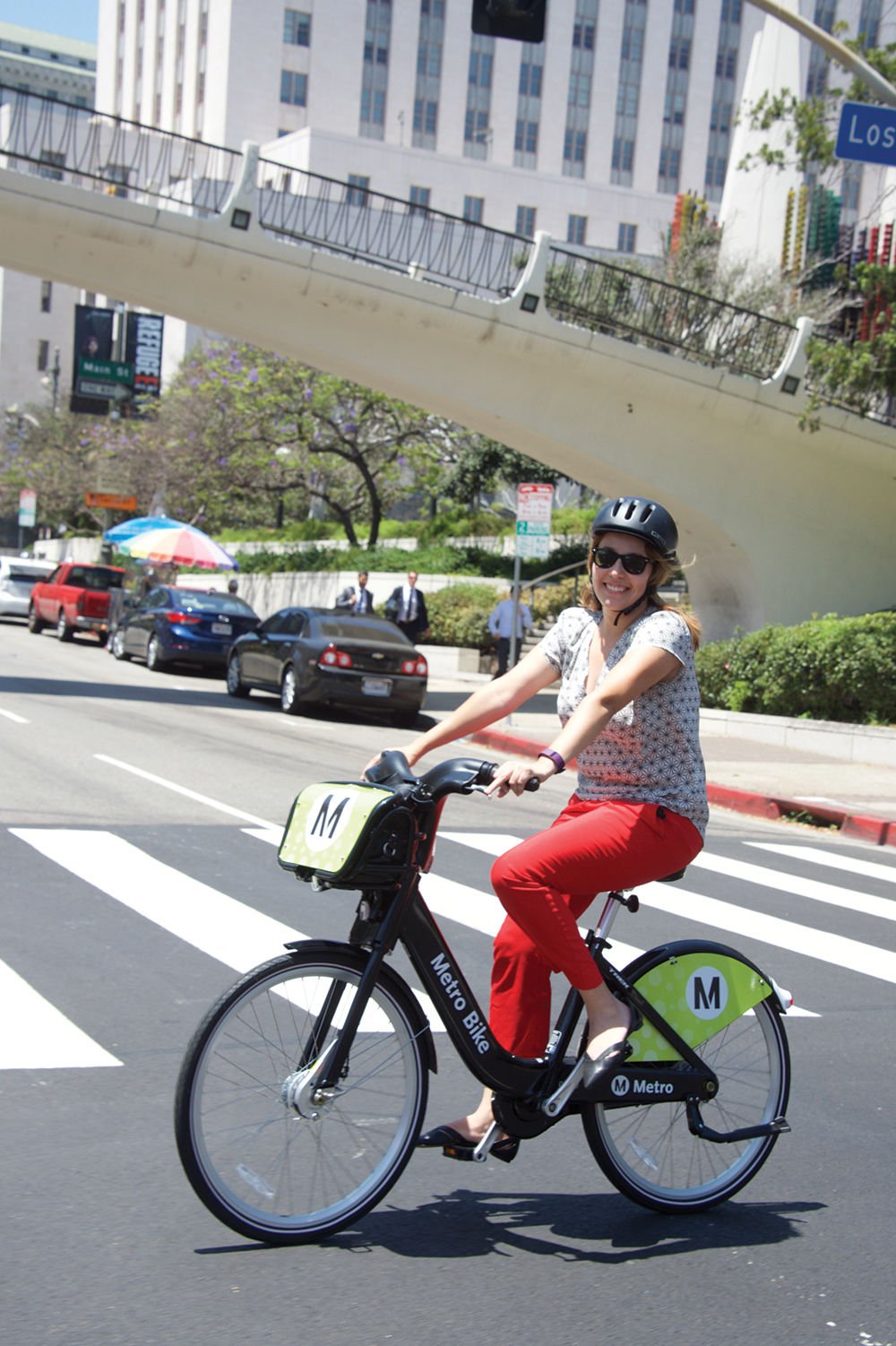 DTLA - Last summer, crews with the Metropolitan Transportation Authority and the city Department of Transportation began installing large computerized bike racks around Downtown Los Angeles. It signaled the arrival of bike share, a long-awaited form of public transportation that officials hoped would help reduce auto traffic in the Central City. It went live on July 7.

Los Angeles had struggled for years to cut the right deal for a short-term bike rental program, in which people pick can up a two-wheeler at one location and drop it off at another. Officials hoped the $11 million system, which now has 65 stations and about 700 bikes, would be the first successful step toward a regional countywide bike share program.

Downtown’s system has racked up more than 182,500 trips, representing about 453,000 miles traversed, according to Metro. The agency claims that more than 430,000 pounds of carbon dioxide emissions have been offset by the use of bike share.

“We were really lucky to do a pilot program in L.A., which historically has been the car capital of the world,” said Avital Shavit, transportation planning manager at Metro. “Choosing a very experienced operator, BTS, was key, as they’ve done it in so many other cities.”

Ridership was strongest in the first three months, with 55,440 trips; an initial half-off pricing promotion and a publicity push helped that figure. Ridership fell in the fourth quarter to 43,203 trips, and dropped further in the first quarter of 2017, to 33,787 trips. Metro officials point to the record winter rains as hampering ridership.

The Bay Area Bike Share program in Northern California costs $3 per 30-minute trip, with a $10 day pass that grants unlimited 30-minute rides. Washington, D.C.’s Capital Bikeshare is just $2 per 30-minute trip, or $8 for a day pass. New York City’s Citi Bike does not offer per-trip tickets but has $12 day passes. Those programs also have far cheaper annual passes, ranging from $8 to $15 a month.

Metro data from the first quarter of 2017 shows nearly two-thirds of riders were monthly pass holders, 31% were walk-ups, and just 7% were Flex pass users.

Metro specifically created a program geared toward short-term use, rather than one that would encourage tourists and others to rent bicycles for several hours. The average Downtown trip is almost 26 minutes, according to an analysis of Metro data. That’s more than the systems in Boston (23 minutes, 30 seconds) and Seattle (19 minutes, 50 seconds), according to an analysis by bike share startup Spin and the website Priceonomics, which tracked data from October 2015 to September 2016.

Some of the most popular Downtown stations are at Union Station, near the Caltrans building on First Street, and Grand Central Market, according to Metro.

“Bike share has raised awareness for bicycling Downtown. When you see someone in a suit on a bike, or more women, or even tourists choosing to try it out, it signals to folks that bicycling isn’t just a physical activity,” said Marcel Porras, chief sustainability officer for LADOT. “We hear from other communities all the time, ‘Can you expand to where I live?’”

Metro and LADOT are doing just that, with a Pasadena bike share starting July 14 and one at the Port of Los Angeles beginning July 31. A Venice program will launch later this year. The three expansions will add up to nearly 1,500 bicycles at about 125 new kiosks, according to Metro.

Downtown L.A.’s bike share debut hasn’t quite cracked the chicken-or-egg question of whether more two-wheeled travelers will accelerate the construction of bike lanes and other infrastructure, but there is cause for optimism. L.A. was one of 10 cities picked in January by the national nonprofit PeopleForBikes to receive $200,000 in technical support and $50,000 in matching funds from local organizations for development of its bike network in Downtown and the area around USC.

Yet challenges remain, with some people reluctant to get on any bike given Downtown’s crush of traffic. Metro is well aware of the sentiment.

“One of the first questions we ask other communities is, what are you going to do to make people comfortable on bikes?” Shavit said, noting that Pasadena has particularly robust plans to build protected bike lanes.

One recent change for Metro has been the launch of a discounted program for businesses that sign employees up for monthly passes. Any other pricing shift requires a lengthy review from the Metro board, Shavit said.

“You should have a very low price of membership for qualified low-income people, as low as $5 a year, which is what the Bay Area is doing,” said Snyder.

While Metro distributed 30,000 free Flex passes to people already registered in the subsidized Metro rider relief program, it has not yet implemented a broader discount program.

The agency is currently reviewing a pilot program with subsidies for students, low-income and disabled users of bike share, as well as full TAP card integration across transit platforms, which would allow for the use of transfer fares on bike share, according to Metro representative Dave Sotero.

More information is at bikeshare.metro.net.

Top Five Stations Based on Ridership

According to Metro, roughly 25% of bike share trips have been used as a connection to other forms of Metro transit. Metro Bike Share is unique compared to most bike share programs in that it shares a fare card with the Metro bus and rail system.

All figures courtesy of Metro.