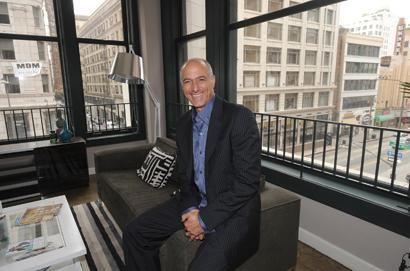 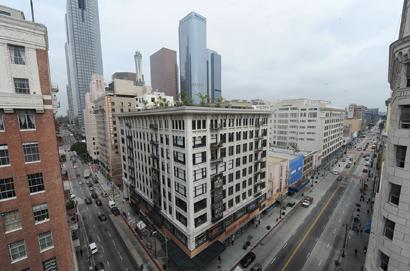 The Metropolitan was once home to the L.A. Central Library. Rents start at $1,150. Photo by Gary Leonard.
1 of 2

The Metropolitan was once home to the L.A. Central Library. Rents start at $1,150. Photo by Gary Leonard.

DOWNTOWN LOS ANGELES - When Michael Fallas purchased the 1913 Metropolitan building in the late 1990s, he didn’t have many plans for the structure. The ground floor was Fallas Paredes, a 40,000-square-foot store specializing in discount apparel. Most of the upper levels in the 10-floor edifice were storage space.

Like many people, Fallas watched as Tom Gilmore was the first person to take dead old Historic Core office buildings and turn them into market-rate housing, a move made possible by the city’s 1999 passage of the Adaptive Reuse Ordinance. That inspired Fallas to think differently for the future. It also put him on a road filled with tough obstacles and serious learning experiences as he set about transforming his property into a residential complex.

It may have taken a lot longer than he anticipated, but now Fallas’ vision has born fruit. In February, the Metropolitan (not to be confused with the Metropolitan Apartments or the Met Lofts, both in South Park) opened as 88 apartments.

“I love this building,” Fallas said one recent afternoon as he sat inside one of the units in the building at 315 W. Fifth St.

Slim and with an almost constant smile that seems to hint at both pride in the project and relief that it’s completed, Fallas said the property, like most adaptive reuse projects in Downtown Los Angeles, has both classic touches and modern elements. The former is not surprising, considering that the 1913 edifice was designed by John Parkinson, who would go on to work on projects including Union Station, City Hall and the Coliseum.

The Metropolitan was designed in the Beaux Arts/Classical Revival style. The restored exterior is made up of glazed terra cotta and stands out due to the relief sculptural ornamentation at the base of all the windows. Above the 20-foot arch entrance on Fifth Street is the original terra cotta sign that reads “Metropolitan.” Fallas said it was an unexpected find during the renovation.

The open-space lofts range from 623-2,263 square feet. Rents are $1,150-$4,500. The residences include glossy concrete floors, 12-foot high ceilings and granite countertops in the bathroom and kitchens. Some units have fire escapes that have been converted to balconies.

Fallas acknowledges that the transformation was not easy, and almost everything had to be restored. He would not reveal the price of the conversion that began in 2008.

“It was a wreck. It was unusable,” he said. “I couldn’t even make it into offices so it had to be completely gutted. But it had great bones and the windows were magnificent.”

The first floor is still Fallas Paredes, and the second level is used as commercial office space and storage for tenants. The apartments begin on the third floor and parking is available in a lot across the street for $150 per month per space.

The Metropolitan includes many of the amenities that have become de rigueur in Downtown transformations. There is a resident lounge and gym and, on the roof, a pool with a barbecue area. Privacy is not optimum, since the building is located within full view of several windows of the neighboring SB Grand, which is two floors taller than the Metropolitan.

Since opening in February, 35 units have been leased. Fallas said he expects complete occupancy within six months.

Fallas has a long history in Downtown, though not as a developer. He is the head of National Stores Inc., which is based in Gardena. The business began in 1962 from a small store in Downtown.

The company now runs more than 200 discount clothing stores in five states, including the Downtown Fallas Paredes, which faces Broadway at the base of the Metropolitan. After leasing the space for years, Fallas acquired the building in the late ’90s.

“I grew up on Broadway basically,” Fallas recalled. “Working as a stock boy in 1975 for my father.”

The now 48-year-old has seen Downtown go through many changes. That is partly what made him cautious about jumping on the adaptive reuse bandwagon in the years after Gilmore opened his three Old Bank District buildings at Fourth and Main streets.

“I was worried about the California dweller understanding urban living, since growing up here I knew that everyone wants to move to L.A. to live on the beach,” he said.

The beach isn’t what 46-year-old Annika Sandberg had in mind when she moved in to the Metropolitan in March. In fact, the former Pasadena resident said she wasn’t looking to move at all, until she took a tour of several local housing complexes organized by the Downtown Center Business Improvement District. She just wanted to check out the architecture of the buildings.

“I loved the location of the Metropolitan,” she said. “I was fascinated by the area, the tall ceilings and the windows, two full walls of windows.”

A week later, she had signed a lease and was one of the first 10 tenants in the building.

When Fallas first decided to turn the Metropolitan into lofts, he knew he needed help to get him through the complicated process of building in the Central City. He turned to Rocky Rockefeller, whose Rockefeller Partners Architects has worked on adaptive reuse projects in Downtown such as the El Dorado Lofts, the Douglas Lofts and the Van Nuys building.

The Metropolitan was one of his biggest challenges, requiring drastic repairs, said Rockefeller.

Rockefeller noted that the building housed the Los Angeles Public Library from 1913-1926, before it moved to its current location at 630 W. Fifth St.

The first post-library ground-floor tenant was the Owl Drug Company. It was followed by JJ Newberry’s, a general merchandise discount store that closed in the late 1980s. Like many other buildings in the Historic Core, the Metropolitan experienced a slow deterioration as tenants left Downtown for areas to the west.

The renovation, which took about three years, included gutting the interior of the building, replacing all of the plumbing and electrical, and designing a new floor plan, since most of the levels above the store were open spaces.

“It was basically a warehouse space,” Rockefeller said. “Most of the walls had been taken out of the building. We put the walls back in the corridors where they had originally been.”

While the central location is helping attract tenants, it also proved to be one of the greatest challenges in restoring the building. Fallas said that in order to avoid Downtown auto and pedestrian traffic, the general contractor basically worked from midnight to 5 a.m. and had a tough time finding places to store all of their equipment. Rockefeller said bringing the structure up to seismic code was also a challenge.

While the project arrives years after Gilmore’s developments opened, Fallas thinks the timing could not be better for an apartment complex in the heart of the city.

“I think it’s a good time for rental property,” he said. “A lot of people today can’t buy a home since finances are very tight and we’re priced just right for the area.”

Once Fallas finally decided to turn the building into housing, he said he never doubted his decision, even if it caused him some restless nights.

“Other than every night at 2 a.m., at no point during daylight did I ever look back,” he said. Then, with a smile, he admitted, “It did cost me some sleepless nights.”