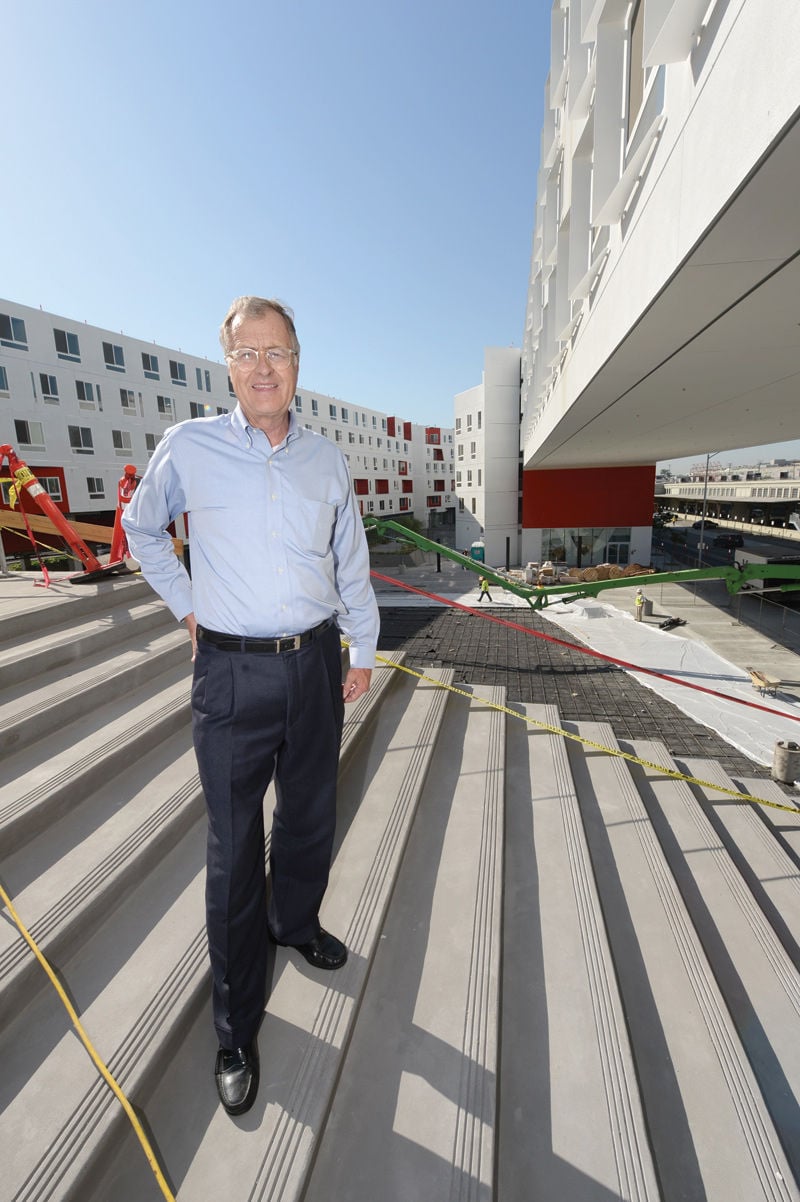 The Arts District’s One Santa Fe features a sleek design inspired by the area’s historic rail infrastructure. Bill McGregor of development firm McGregor Brown began working on the project nearly a decade ago. 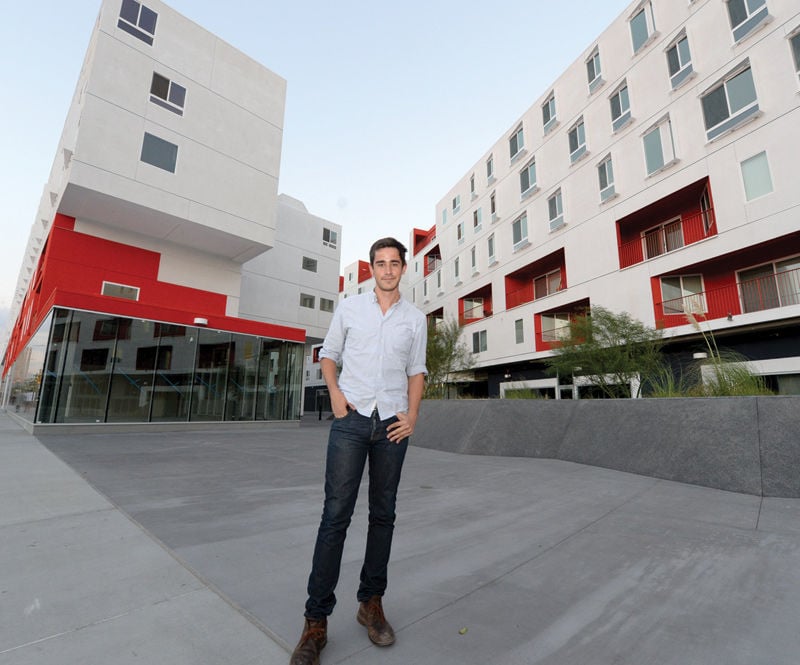 Reed Alvarado is one of the new tenants. The $160 million project contains 438 residences and stretches across four city blocks on Santa Fe Avenue. The retail section will include a supermarket, an ice cream shop and other stores and restaurants.

The Arts District’s One Santa Fe features a sleek design inspired by the area’s historic rail infrastructure. Bill McGregor of development firm McGregor Brown began working on the project nearly a decade ago.

Reed Alvarado is one of the new tenants. The $160 million project contains 438 residences and stretches across four city blocks on Santa Fe Avenue. The retail section will include a supermarket, an ice cream shop and other stores and restaurants.

DOWNTOWN LOS ANGELES - You couldn’t mistake One Santa Fe for any other Downtown development even if you tried.

One Santa Fe, at 300 S. Santa Fe Ave., is the Arts District’s biggest residential complex, and one that will instantly change the community on a number of fronts, from the visual to the retail, not to mention the traffic impact. With 438 apartments and more than 78,000 square feet of space for stores and restaurants, the $160 million development is the most prominent example of how quickly the once-sleepy neighborhood is blooming.

While some may fret over One Santa Fe’s size, the developers have taken pains to ensure that the six-story project retains community- and pedestrian-friendly elements. A towering 200-foot-wide opening at Third Street, bridged by a slab of apartments above, serves as the main entry into the complex. From there, a paseo lined with retail spaces and housing on upper floors veers at an angle roughly parallel to Santa Fe Avenue, eventually opening to the sidewalk near Fourth Street.

“It’s significantly increasing the value and attractiveness of the Arts District as a whole,” he said. “We intentionally designed a pedestrian environment in a place that was a more industrial highway environment. I think it’ll be fantastic when everyone moves in.”

Designed by prominent architect Michael Maltzan, whose Downtown Los Angeles projects include Skid Row’s Star Apartments, One Santa Fe pays homage to the long, linear forms of the rail infrastructure that has historically been a feature of the neighborhood. Contrasting creases and colors separate the ground floor from the parking and housing above, giving portions of the building the illusion of suspension. It eschews the jutting glass balconies and gaudy facade articulations common in many current Downtown projects for a minimalist look set off by large, angular columns.

Maltzan said he fought for the huge “bridge” off Third Street, despite the increased expense of making such a wide opening without structural columns interrupting the span. Opposite of the bridge is another large opening adjacent to the rail yard on the east. Maltzan said the design anticipates any new transit systems that could be built along the Los Angeles River. Metro is exploring having a light rail spur extend into the Arts District.

“One Santa Fe could intertwine with future infrastructure as the Los Angeles River is redeveloped, so we wanted that point of access,” Maltzan said. “All development in the city should be for today but also for the future.”

The idea for One Santa Fe stretches back nearly a decade, when the Arts District was showing the first signs of new growth, McGregor said. The development team saw potential in the property, formerly a collection of Metro parking lots.

However, like many projects, it ground to a halt during the recession. It took the addition of Canyon Capital in late 2011 to get things moving again. One Santa Fe broke ground in early 2012.

The project features studio to two-bedroom apartments in an assortment of floor plans. Some units have a conventional single-level layout with open kitchens and balconies. Others are split on two floors, with entrances either into the kitchen/living area or into a bedroom level. Interior finishes such as cabinet colors and flooring differ from unit to unit.

Rents start at around $1,700 for a studio and go up to $4,000 for a townhome-style two-bedroom. Eighty-eight residences have been set aside as affordable housing, and some of them are reserved for artists.

Amenities include an outdoor theater with a projection screen. There is also a saltwater pool, spa and gym.

The retail space, dubbed The Yards, will include about 25 shops and restaurants. Although none have opened, the anchor tenant will be the Manhattan Beach-based grocery store Grow. Other leases have been inked with vegan restaurant Cafe Gratitude, apothecary Malin + Goetz and Van Leeuwen Ice Cream. The businesses will start opening in the first quarter of 2015 and will likely all be online by the end of that year.

The project includes about 610 parking spaces, with 525 set aside for residents and 85 reserved for patrons of the businesses (around 120 cars could be accommodated with the use of a valet service for retail and restaurant patrons).

In a nod to the community, the project has a space called the Arts District Center for the Arts, which has been leased to a coalition of groups including the Los Angeles River Artists and Business Association, Cornerstone Theater Company and SCI-Arc for $1 per year. It includes room for art exhibitions and a 99-seat theater. Another 35,000 square feet of space on the north end of the development is being used by Metro for a training facility (Metro owns the land but leased it to the developers).

One Santa Fe has garnered its share of skepticism from community members who fear it marks the beginning of a gentrified Arts District. Jonathan Jerald, a LARABA board member, said he appreciates that the developers worked with the group to support an arts component within the building and offer some affordable housing.

“I think the thing that intimidates most people is the sheer scale of the building, and I absolutely understand that feeling,” Jerald said. “But change is inevitable in the Arts District. Our strategy is to create opportunities for artists and the community within that change.”

That sense of skepticism was something Reed Alvarado, an actor who graduated from the University of Southern California last year, felt as well. He decided to move to the Arts District after working at coffee roaster Stumptown and began looking for an apartment.

“I never really thought about One Santa Fe,” Alvarado said. “I was really hesitant because it was a huge building and it seemed antithetical to the feel of the neighborhood.”

His unsuccessful attempt to find housing, however, prompted him to tour One Santa Fe. He was won over by the promise of smaller, local stores and the look and feel of the property.

Alvarado is an early adopter, as only about 65 of the building’s units are filled. The ultimate impact of One Santa Fe may not be felt until the end of the year, when all 438 apartments are open.