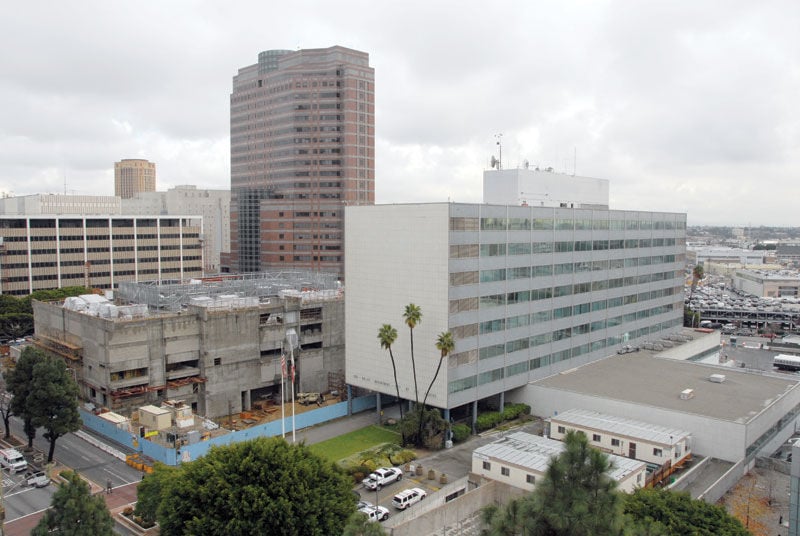 The debate continues over whether Parker Center should be torn down and replaced, or saved and restored. Civic Center watchers say what happens on the site will determine what occurs on other plots in the district. 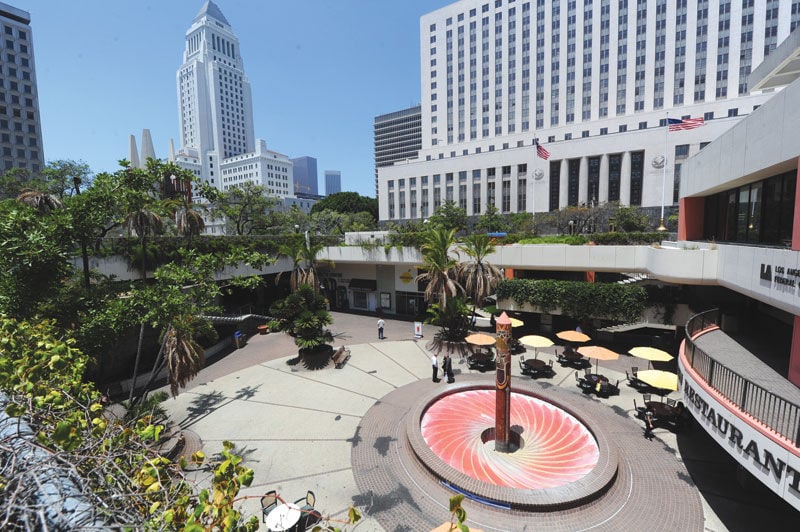 The Los Angeles Mall remains severely underutilized. While some believe it could be a site for a new city office building, its huge underground parking garage raises logistical and engineering challenges. 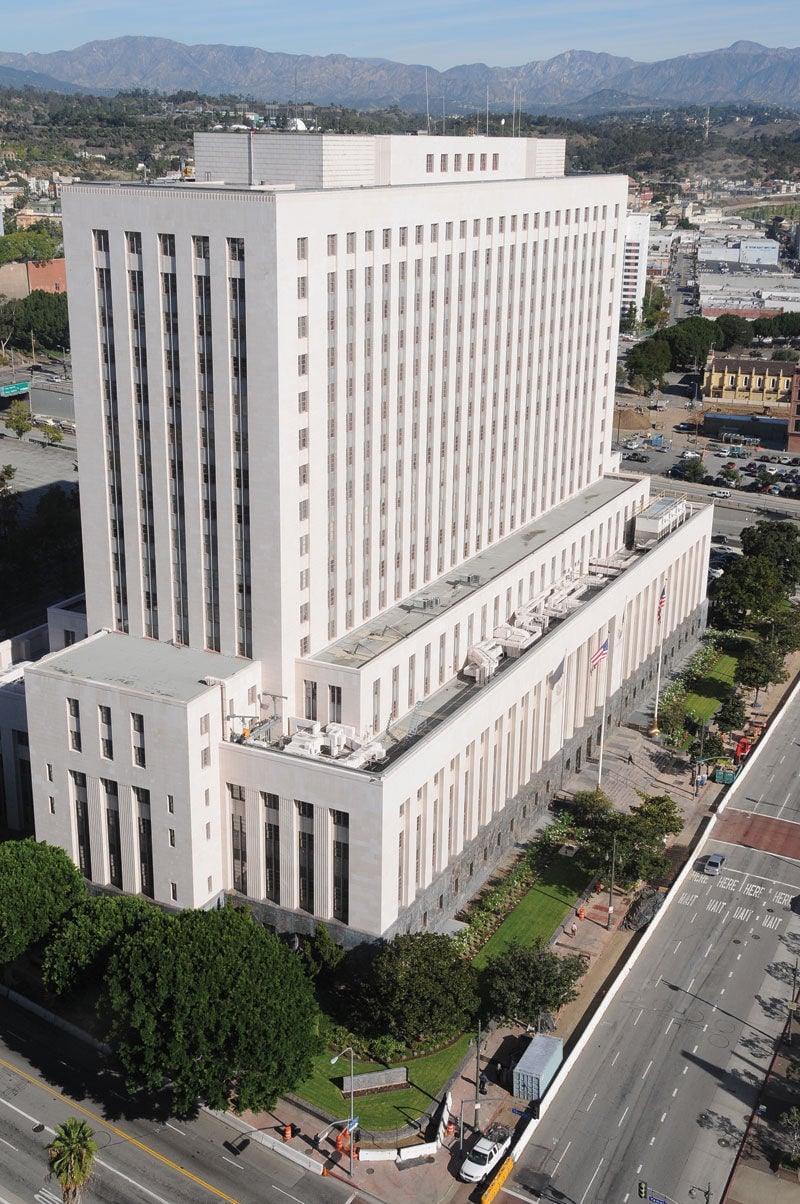 The 1940 Federal Courthouse at 312 N. Spring St. will be mostly empty after the new courthouse next to the L.A. Times building opens. A future use of the 75-year-old structure has not been determined. 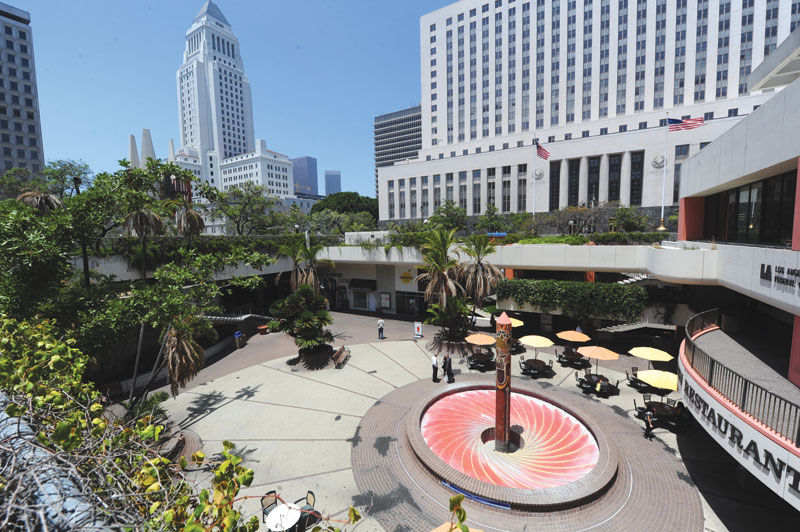 The debate continues over whether Parker Center should be torn down and replaced, or saved and restored. Civic Center watchers say what happens on the site will determine what occurs on other plots in the district.

The Los Angeles Mall remains severely underutilized. While some believe it could be a site for a new city office building, its huge underground parking garage raises logistical and engineering challenges.

The 1940 Federal Courthouse at 312 N. Spring St. will be mostly empty after the new courthouse next to the L.A. Times building opens. A future use of the 75-year-old structure has not been determined.

DOWNTOWN LOS ANGELES - Initially, the debate over whether to demolish or preserve and renovate the empty Parker Center focused on the historic merits of architect Welton Becket’s 1955 building. Now, the discussion is expanding, and in the process is extending well beyond the boundaries of the defunct building at 150 N. Los Angeles St.: What does the city need, particularly in terms of office space, and can those needs be satisfied on this singular plot?

The answer depends on whom you ask.

In May, 14th District City Councilman José Huizar authored a motion asking city staff to look not just at creating office space on the Parker Center site, but also to explore the reuse of nearby city-owned properties such as the underutilized Los Angeles Mall.

It’s an idea whose time has come, say those who in decades past have worked on efforts to upgrade the Civic Center. Now they say Downtown’s resurgence and an increase in residents make it more important than ever to get things right and plan for the future.

In essence, some want a new “master plan” for the area. When the city began writing its last Civic Center Master Plan in 1995, the first question was whether the city even needed a proper Civic Center amid a quickly changing technological and communications landscape, recalled Dan Rosenfeld, who was part of the team.

“We concluded in ’97 that the need for a Civic Center was even greater than in the past because our communities are so diverse and dispersed that there needs to be common ground in the symbolic and operational heart of government,” said Rosenfeld, who today is director of land-use solutions at Community Partners, which helps public and nonprofit entities develop projects.

The resulting plan, often referred to as the “10-Minute Diamond,” suggested consolidating city, county, state and federal government workers so that they were within a 10-minute walk of City Hall, with the idea that this would streamline communication and create a critical mass of pedestrians to activate the area.

While many new buildings have opened, the Civic Center still has a mash of underutilized structures, awkward thoroughfares and empty lots.

Meanwhile, the city has about 1.6 million square feet of “non-optimal” office space that it either leases or is otherwise remote and inefficient for workers, noted Josh Rohmer, a principal project coordinator for the City Administrative Officer.

The Civic Center has the potential to meet the long-term needs of the city, but that makes a holistic approach all the more necessary, added Adrian Fine, the director of advocacy for preservationist organization the Los Angeles Conservancy.

“Before the city or county goes down the path of making potentially irreversible changes to the Civic Center, we need to update the master plan and craft a vision that everyone can get behind, rather than fighting these out one project at a time,” he said.

Like much of Downtown, the Civic Center is booming. Last October the County completed a $230 million renovation of the 1925 Hall of Justice, and the past 15 years have seen the rise of Grand Park, the debut of the Police Administration Building and the Caltrans headquarters, as well as the opening of the Cathedral of Our Lady of the Angels. A $323 million federal courthouse is scheduled to be completed next fall.

[The Hall of Justice Returns to Former Glory]

How the city’s office needs fit into the equation is perhaps the biggest question in the area’s continuing evolution. The environmental impact report for the Parker Center redevelopment said the city needs about an additional 1.1 million square feet of office space to satisfy current demand.

Many city employees remain scattered throughout Downtown. Some work in the Garland Center at 1200 W. Seventh St. in City West while others are east of Little Tokyo at 700 E. Temple St. or at Figueroa Plaza next to the 110 Freeway.

“If we’re spending $30 million or $40 million on leases each year, what’s the break-even to build a new structure?” Rohmer said.

The city owns enough property to explore building a series of office structures in the Civic Center, Rosenfeld said. In addition to the aging City Hall South building at the northeast corner of First and Main streets, there is the Parker Center block and the parcel on the northeast corner of First and Alameda streets dubbed “the Mangrove Estate.” Different plans have been floated for all of the sites in the past.

Figuring out Parker Center is the key to planning the rest of the Civic Center, experts say. While the size and look of a project there remains to be seen, any structure would need to incorporate not just government needs, but also those of the rapidly expanding residential base, said Edward Avila, president of the city’s Project Restore, which spearheaded two significant reports on improving urban connectivity in and around Downtown, “Civic Crossroads” and “First Now,” in past years.

“There aren’t many locations left to do a government-only building,” Avila said. “There’s got to be an effort to maximize office space for the city and include mixed uses for the public. It’s the way moving forward.”

Some long-underutilized parcels in the area are already changing. In addition to the federal courthouse, a park is being planned at the northeast corner of Broadway and First Street. A station for the Regional Connector at Second Street and Broadway could spur development on surrounding blocks.

Still, questions remain. In addition to Parker Center, one of the most puzzling pieces is the L.A. Mall. The complex at 201 N. Los Angeles St. has about 100,000 square feet of underground retail space that is only about one-third occupied, according to Rohmer.

“It would be a perfect site for a city office building,” he said. “The commercial space isn’t the most viable. And it’s not very viable for anything else. No one else is going to build a residential structure or office building there.”

There is no easy solution. Rohmer noted that the mall is on top of a 2,000-space parking garage, which poses logistical and engineering questions.

Other issues concern aged structures. The 1940 Federal Courthouse at 312 N. Spring St. across from the L.A. Mall will be mostly empty after the new courthouse is complete, but its configuration (the courtrooms lack windows) and designation as a historic structure complicates any demolition or major transformation. No reuse plans have been revealed.

Others have called for the redevelopment or razing of the County Hall of Administration and the Stanley Mosk Courthouse; the latter is frequently criticized for its imposing, unfriendly presence on First Street. But as with Parker Center, the Conservancy’s Adrian Fine cautions people from jumping to demolish a structure because it seems “ugly.”

“They’re a product of their time,” Fine said. “It’s 1950s-era architecture, and it’s harder to get your arms around those types of buildings, if you will, but what’s special about the Civic Center is its array of different eras and styles.”

The Central City has come a long way since Robert Harris began working on the Downtown Strategic Plan in the mid-1990s. In a proposal that now seems ahead of the curve, Harris and other planning and design experts called for the activation of commercial space and creating housing in Downtown as a way to kick-start development in the urban core.

Today, Harris, who is an architecture professor at the University of Southern California, is closely watching developer Related Cos.’ $850 million Grand Avenue plan, which he believes will usher in a new era for Bunker Hill as a cultural and residential hub, and in turn help pump life into the Civic Center. He pointed to the benefits of what he termed “socially equitable housing” in the project.

“In a big city like L.A., those who can only afford a relatively small house or apartment, they want to go out and use the city as the family’s living room,” Harris said. “When units are so big that you can just exist forever in your home with all the amenities on the property, that public activation doesn’t happen quite the same.”

Rosenfeld sees both low-hanging fruit (using city and county buildings to host community activities and even movie screenings) and broader issues (how to reconnect the Civic Center with El Pueblo and Union Station) on the horizon. He thinks a Civic Center joint powers authority with city and county leaders could lead to a new master plan.

Rohmer expects instruction from the City Council to do something along those lines in the coming months.